Shadespire sees some new blood in the next week. Chaos and Order get some variety to their lives with Magore’s Fiends and the Farstriders getting trapped in the Mirrored City.

Although I don’t know if you could call getting trapped in a hellish unending realm of battle death and rebirth from which there is no escape and only Nagash to answer to a “life,” but it feels weird to say ‘add some variety to their existence’ so there you have it. At any rate, two new warbands come to Shadespire, and they both look radical. Let’s check them out.

As mentioned, there are two new bands. First up, Magore’s Fiends (not friends as I initially thought). 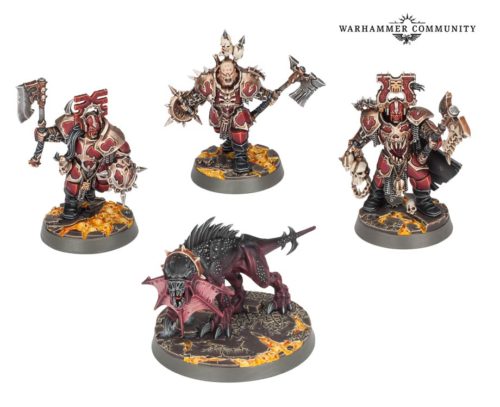 Magore’s Fiends are Blood Warriors, the elite troops of the Khorne Bloodbound. Their desire to spill blood and reap skulls is shared with Garrek’s Reavers, but their methods are very different. In Magore’s Fiends, you will find four models – a trio of Blood Warriors called Magore Redhand, Ghartok Flayskull and Zharkus the Bloodsighted, and Riptooth, a daemonic Flesh Hound of Khorne. Each is a powerful fighter, heavily armed and armoured, and ready to bring ruin to their foes and honour to the Blood God. As with every Warhammer Underworlds: Shadespire warband, Magore’s Fiends come with 60 new cards to add to your collection, including a host of universal cards to use with any warband. 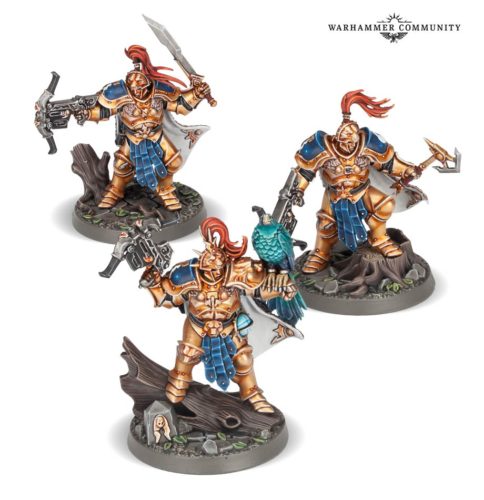 Also coming with 60 new cards are the Farstriders. Stormcast Eternals from the Vanguard Chambers, these fighters are swift, well armoured and carry ranged weapons, giving them a playstyle quite unlike any other in the game. Sanson Farstrider and his comrades Almeric Eagle-Eye and Elias Swiftblade are in the City of Mirrors in search of a cure to the loss of personality that comes with Stormcast being reforged – but the hunters have become as trapped in Shadespire as the fighters of the other warbands, and now they seek only to survive.

That’s kind of cool–one thing that’s been underplayed in Shadespire is ranged combat. I’ll be curious to see if this means we might be seeing some more game play elements like Magic or Monsters come to Shadespire.

Get ready for battle!