Lets talk about the most feared man in the galaxy.

Over the past weeks we’ve talked about the basics of the Imperial army in Legion, the redoubtable Stormtroopers and the lightning fast Speeders. While these units may back up the building blocks of your army it won’t be complete without a leader, and who better than the fearsome Darth Vader? Lets talk about how to get the most out of him in Legion. 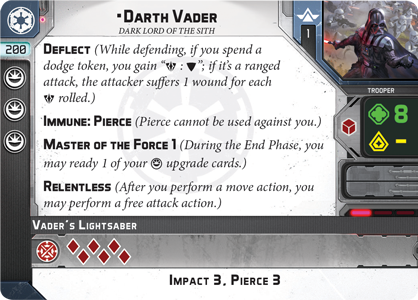 Vader is one of the most power, but also hard to use, units in the game. At 200 points he’s a significant investment, but one that can pay off. Defensively Vader is a beast, with 8 wounds and a red defense dice – he’s hard to take down. Unlike most infantry he ignores pinning and other moral effects. This durability comes at a price as Vader is slow, only speed one. Moreover while he has an amazingly powerful attack, 6 Red Dice with Impact 3 ( for taking down vehicles) and Pierce 3 (meaning if he hits you you will feel it) it is limited to melee only. If the slow Vader can’t get to you he can’t, normally, hurt you. 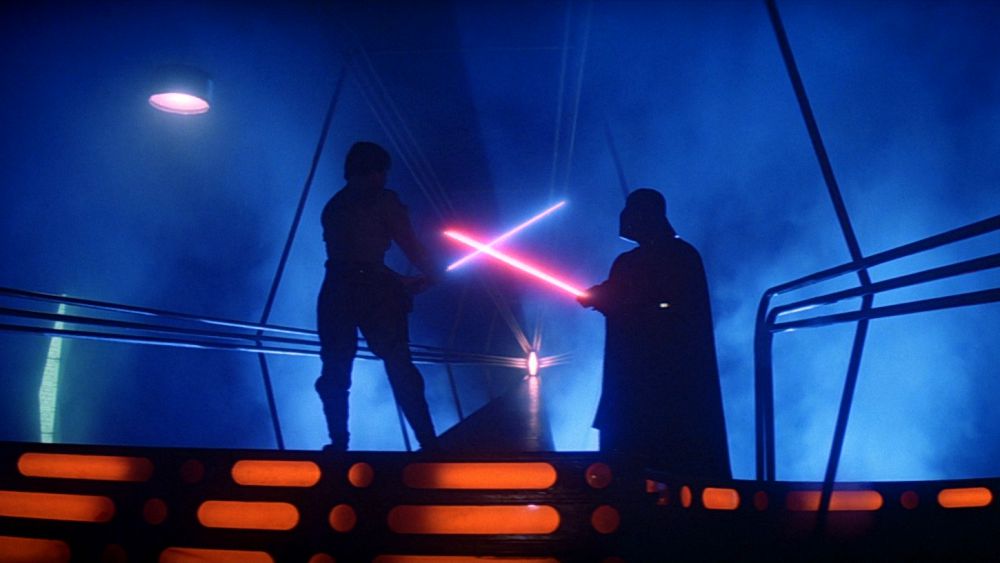 Vader also comes with a whole host of special abilities. Deflect adds to his durability, giving  him defense surges and allowing you to put damage on your attackers. But remember that dodging rather than moving isn’t always wise. Immune:Pierce is nice as well, meaning he can tank even the most deadly hits. Master of the Force allows him to ready one force card a turn for free, we will talk about how good that is in a bit. Lastly Relentless saves him from being almost useless, since it allows him to attack after moving. He can thus move-move-attack, giving him his best chance at getting hits in.

You Don’t Know The Power Of the Dark Side 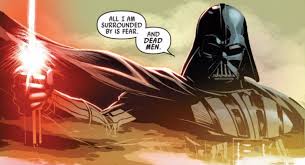 Old Darth can take up to three Force Power upgrades and which ones you pick will really make a big difference. Lets take a look at them. 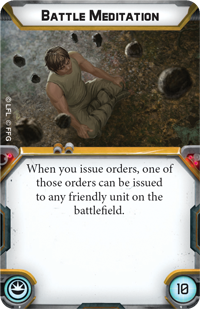 While costly at 10 points, Battle Meditation is nice because it is a passive ability Vader doesn’t have to worry about readying it at all. It also helps him out as due to his snails’s pace he will likely be out of range of some of his units. On the other hand most vehicles can take Long-Range Comlink which has a similar effect. Your force make up will determine which is a better choice, but its great to have options. 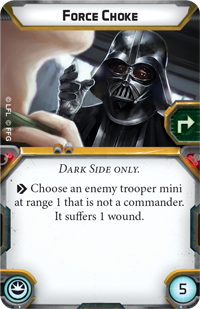 Force Choke is a must have for Vader in my opinion. Being able to deal out free wounds at range one is great for the slow short ranged Sith Lord. Its a free action to use so costs him little and with Master of the Force he can do it every turn. It’s particularity great at finishing off the last survivors of enemy squads so you don’t have to waste a turn shorting them. Don’t leave home without this. 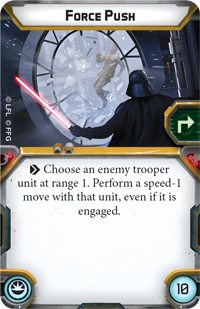 Force Push is another powerful option. Anything that lets you move enemy units around is a great help. It’s useful for pulling enemies into you, thus extending your threat range. In addition you can use it to push enemy units off objectives or out of cover, setting up great combos. 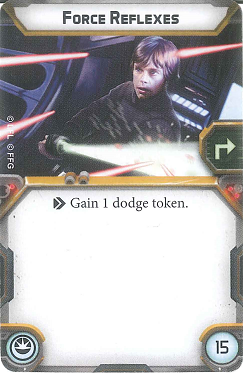 Force Reflexes is another useful, if situational power. Dodge is great for Vader, as it lets him active Deflect. However as I mentioned using an action to dodge rather than move isn’t great. With Force Reflexes you can double move and dodge as well. Win-win. On the other hand its is a 15 point upgrade and it, like most powers requires you to exhaust it. While Vader can ready one power a turn, at some point loading him up with two many powers gets wasteful. 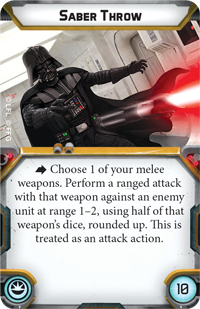 Saber Throw is another way you can extend Vader’s threat range. For ten points he gets the other to make a half strength attack at range 1-2. While it’s only a three dice attack it does keep it abilities, so it’s a pretty strong attack and helps make up for his short range.

Lord of the Sith 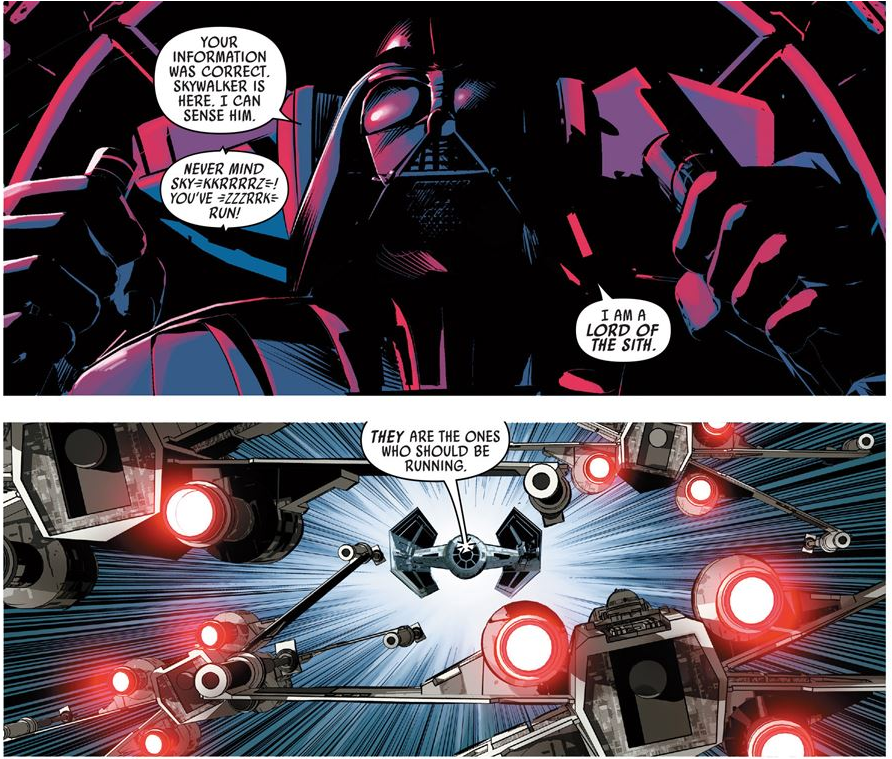 Like all commanders Vader also gives you access to three command cards, powerful tools you can use on the battlefield. 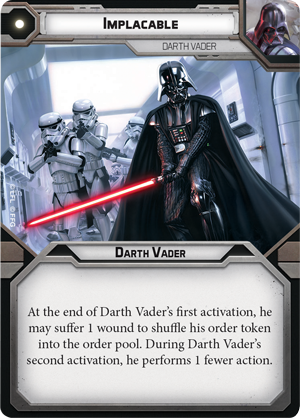 Implacable is a great 1 pip card that can really turn Vader into a beast. For the cost of one point of damage you can have Vader take a 2nd, if reduced turn. While it can be tempting to use this card early on to rush Vader across the table, I don’t think that is the best use of it. Instead I feel this is card you want to use on the turn Vader gets into combat. Used that way, it can still speed Vader up, but it can also allow him to attack twice in the same turn. If Vader is going to take damage, I want  him to be dealing it out as well. 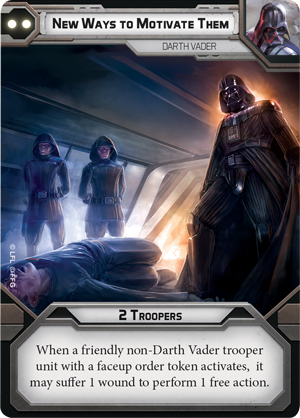 While powerful, this is my least favorite of Vader’s cards. While giving units extra actions is great, the cost, a dead model, is pretty high. I’ve often seen people using this in order to move-aim-shoot, getting relatively little benefit for the loss. This card is best saved for those desperate situations where you really need to rush a squad onto an objective. 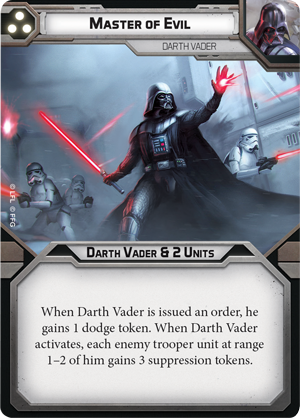 Master of Evil is potentially Vader’s most powerful card. Not only does it give him a free dodge token, but is great, but it can dump out a ton of suppression on enemy units. Used right this card has the potential to route entire armies.

Vaders slow speed and short range mean you really need to be careful when using him. Deploying him poorly, or failing to move in the right direction can keep him from ever getting into combat. Since Vader is a huge points investment that can lose you games. The most important part of using Vader is planning. Know where he needs to be and where he needs to go, and move there with purpose. Get him into the enemy and he will destroy what he touches. Strand him in midfield and he will die a useless death. Use Vader aggressively and you will see good results, fail, and well the Emperor has replacements waiting. 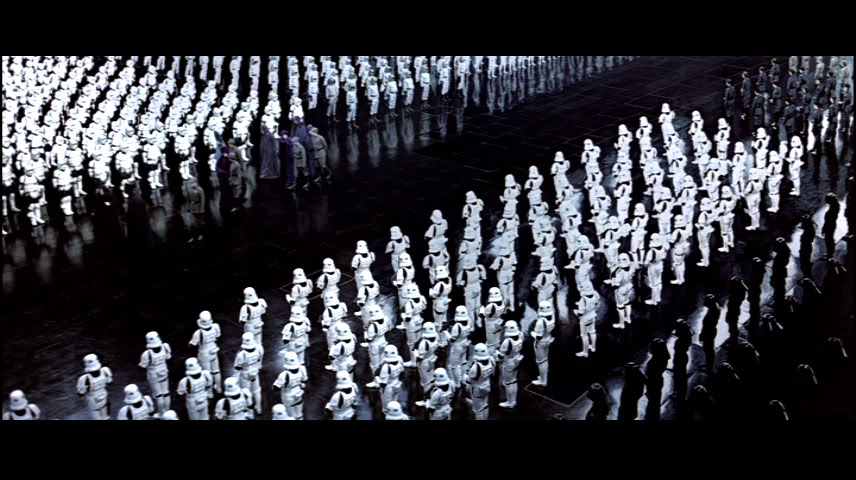 Let us know how you use Vader down in the comments!

Author: Abe Apfel
Abe is that rare thing, an Austin local born and raised here. Though he keeps on moving around, DC, Japan, ETC., he always seems to find his way back eventually. Abe has decades of experience with a wide range of tabletop and RPG games, from historicals, to Star Wars to D&D and 40K. He has been contributing to BOLS since almost the start, back when he worked at and then owned a local gaming store. He used to be big into the competitive Warhammer tournament scene but age has mellowed him and he now appreciates a good casual match. He currently covers 40K tactics and lore, as well as all things Star Wars, with occasional dabbling in other topics. Abe remains in mourning over the loss of WFB to this day.
Advertisement
Rules Star Wars Legion Tactics
Advertisement 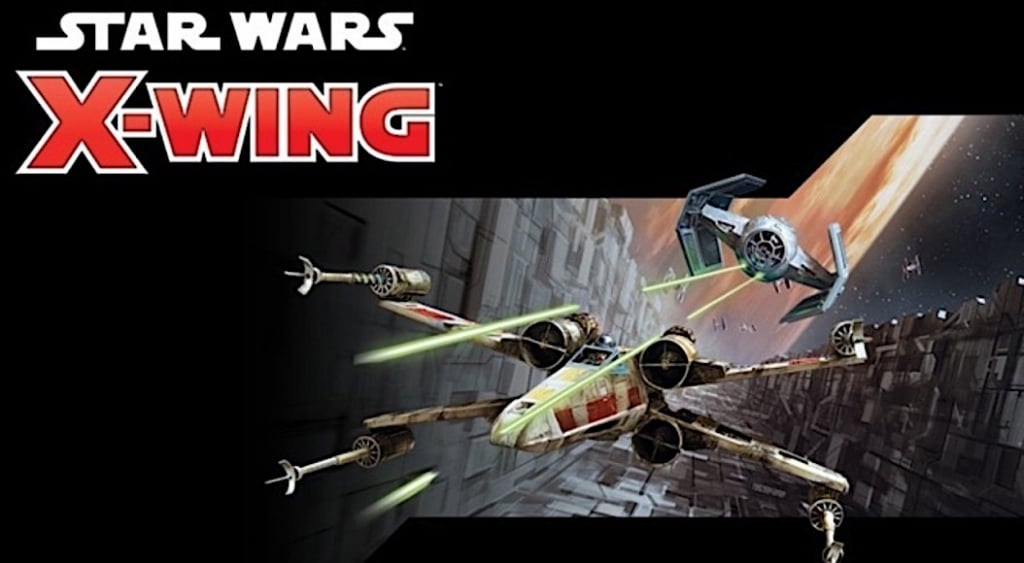