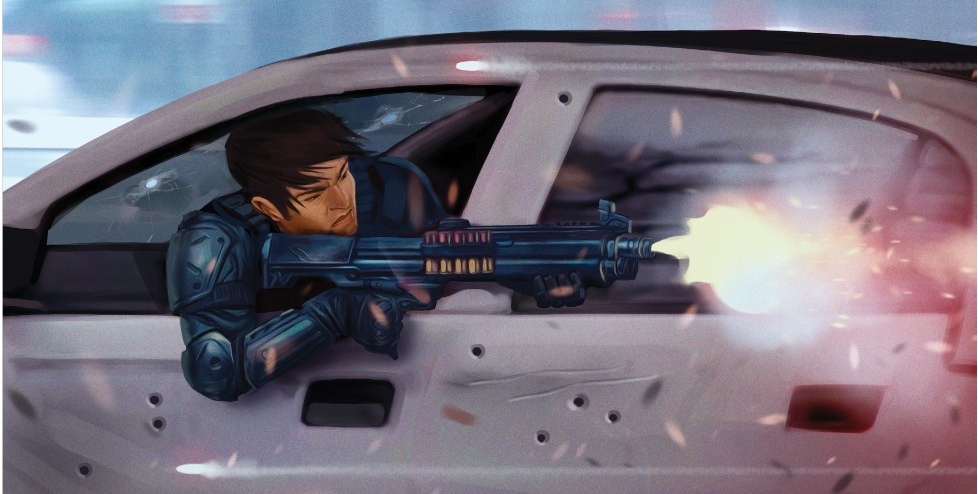 Green Ronin is trying some fantastic stuff for their modern adaptation of the Adventure  Game Engine–the Modern AGE promises action-packed adventure in a modern setting that can handle everything–even stunts to fine-tune your combat and actions.

Let’s talk about Modern AGE. The adventure game engine is a flexible, character-driven system that incorporates stunts to represent critical successes. These are different kinds of effects you can layer in on top of things. But in Modern AGE they’ll function differently, letting you do rules that might take a whole other subsystem, but instead stunts help you streamline things, giving Modern AGE three different tiers of play: gritty, pulpy, and cinematic.

So let’s talk stunts. In the Modern AGE, there are a few different kinds of stunts.

One new major action in Modern AGE is the Stunt Attack. In combat, you forego the standard result of an attack—inflicting damage—to automatically gain 1 stunt point. You still get stunt points from doubles. These and other sources of stunt points (usually Relationships) stack with your free SP. This is how you perform actions which in other games, would be resolved with a “grapple check” or something. In many cases it’s better to inflict damage, but when you gain talents and specializations which enhance your stunts (such as Modern AGE’s Martial Artist, who gains bonus stunt points for some stunt attacks) it can become a powerful option.

Due to the expanded role of stunts, Modern AGE includes a whole bunch of them, bundled into specific categories, such as Grappling Stunts and Membership and Reputation Stunts (which support that game’s more robust social system. Two new “non-rules” enters the game to deal with the risk of decision paralysis. Every stunt list has labeled Core Stunts. These have low or variable costs, and are generally useful, so when you can’t decide on your stunts, these are your picks.

As you might have predicted after seeing a similar system in the Fantasy AGE Companion, Modern AGE gives you the option to run vehicular combat without tracking a Health Point equivalent for cars and such. While the GM can assign Health values to vehicle parts and special effects for destroying them, affecting the vehicle as a whole involves Anti-Vehicle Stunts whose effects range from making the target vehicle harder to handle, to turning it into a twisted, flaming wreck. Some attacks, such as those with an anti-materiel rifle, can generate more powerful stunts against vehicles.

You can read the full writeup over at Green Ronin’s site, and you can find out more about Modern AGE right here.

And of course you can find a post-apocalyptic setting for Modern AGE in the works already, because we live in a glorious golden age of RPGs.