40K: The Astra Militarum Legend of The Loyal 32

Lets talk why you really see those same 32 Astra Militarum troopers in every Imperial army out there.

You’ve seen them in countless lists, from major tournaments to casual night. Two Company Commanders, three ten model Infantry Squads. Thirty Two brave souls out to fight the good fight. You may know them as something like the “AM CP Battery.”  Over the past several months they have become one of the most common groups of units to see in a game. I would bet they are the single most taken battalion in the game, they show up in almost every Imperium army out. But who are these ubiquitous defenders of humanity? And how can they show up on battlefields all across the galaxy? Well, read on…

Hidden deep in the legends of the Imperium is the key to these warriors. You see these courageous daughters and sons of the Emperor are not the run of the mill mortal warriors they appear to be, they are in fact Living Saints, bound and blessed by the Imperial Will. Like the more famous, and powerful, Celestine these pious servants did great works during their mortal life times. Though death claimed them all in the end it was not the end for them, like other Saints they, the Loyal 32, are reborn again and again by the Emperor’s Grace.

Wherever the forces of Mankind suffer and fail, there the Loyal 32 arrive to turn the tide. Like the better known Legion of the Damned, they seem to have some ability to traverse the Warp without need of Geller Field or Navigators.  This allows them to appear on worlds all across the Imperium, indeed due to the time distorting properties of the Warp they are often reported fighting in multiple Warzones simultaneously. This has lead some enemy commanders to complain that it seems like “these guys are in every Imperial Army.” But who are these brave souls, and what works have they done? 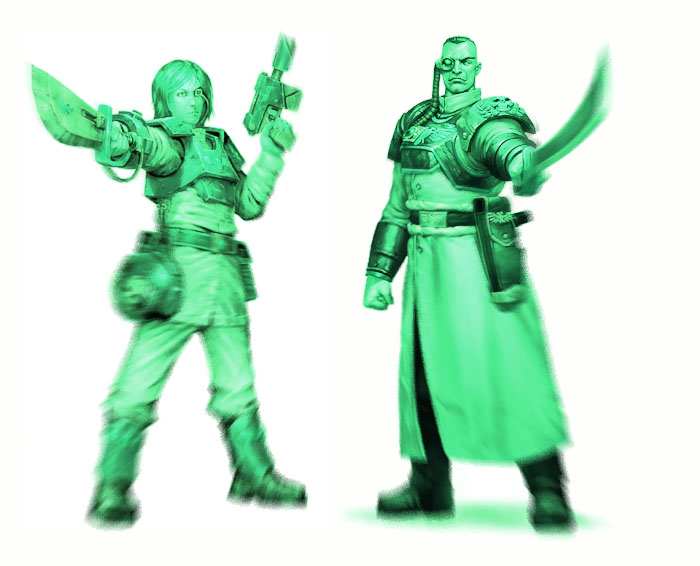 The Loyal 32 seem to be commanded by a pair of officers. As with all the Loyal 32 ,reports on their appearance vary, with some positing that they appear in different guises depending on who they are fighting with, picking uniforms and even faces designed to appeal to their current allies. It’s not uncommon even to see reports of them appearing as an almost colorless gray, with no distinguishing markings.

Reports are clear on a few things however. There is always one officer who appears as a tactical genius, lending their knowledge of battlefield stratagems to their side. Known as “The Warlord” and often described as a stately older man in red and gold uniform, some have identified this officer as none less then Saint Crassus. Sometimes this officer also carries a large two-headed avian servitor.

On other occasion the servitor has been seen in the passion of the second commander. Though also clearly a capable battlefield tactician this saint is commonly known as “The Officer” and can most often be seen closer to the battle front giving commands to her troops. She is often described as a small green eyed women with black hair and bearing nine distinctive wounds.

Like their officers, the exact names and origins of the troops that make up the Loyal 32 are impossible to pin down. Regiments from Mordia, Catachan, Lost Cadia and even Holy Terra have all claimed the Loyal 32 as their own. Indeed you would be hard pressed to find a regiment who didn’t see them as coming form common stock.They have even been reported fighting in uniforms that can only have belonged to units of the Imperial Army during the Great Crusade. Their fighting style is as fluid as their uniforms, they are as at home in the rugged jungles of a Deathworld as they are in canyons of Hive City. 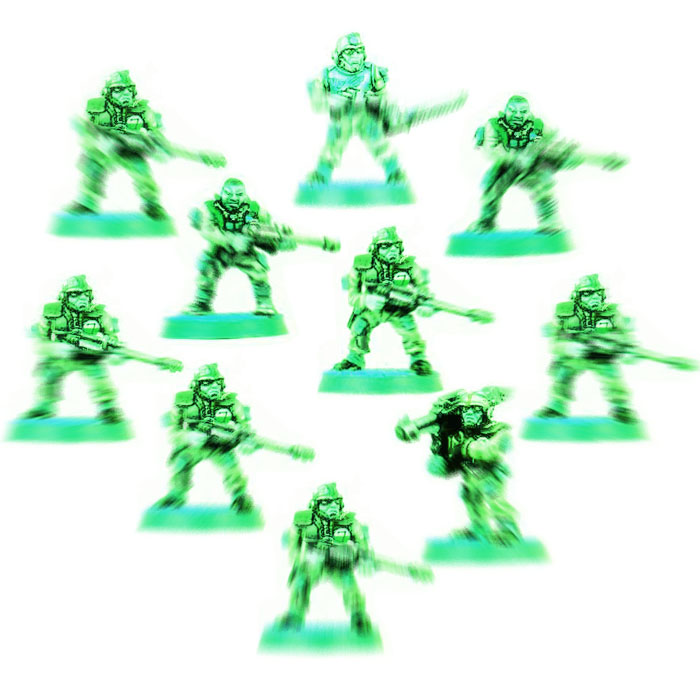 Though their names are unknown legends have attached themselves to these soldiers. They have often been given epithets that the common troops know them as. In some ways it seems these saint represent archetypes of Astra Militarium, rather than individuals.

For instance their is “The Grenadier” a saint often found towards the front of the battle. This Guardsman carriers a truly staggering amount of frag grenades and uses them at every opportunity. Tall and powerful he is sometimes identified as Saint Gerstahl and is often seen in Cadian battledress. 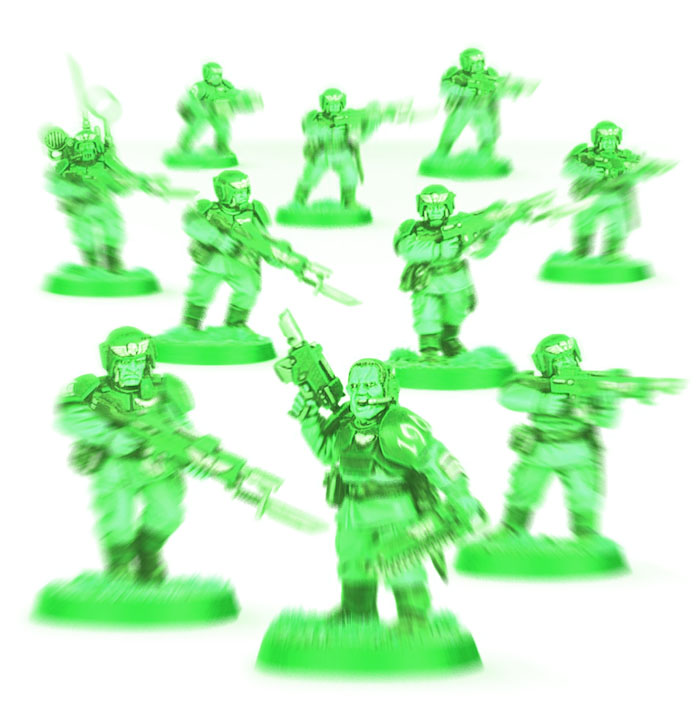 Another common sight among the Loyal 32 is “the Sergeant”. This rugged  trooper commands one of the 3 squads, and is often the last of his unit to be seen on a battlefield.  A man of indomitable will he sometimes bears the the markings of a high ranking officers and is at times thought to be known other than Saint Kiodrus.

None of these troopers frustrate the enemy as much as the guardswomen known only as “The Holder”. This diminutive woman is known for miraculously surviving when the rest of her squad is destroyed. She appears so weak that the enemy often ignores her, not bothering to waste firepower on “a single infantry model”. However by the Divine Grace of the Emperor she later finds herself on an important battlefield objective at a key moment, allowing her to secure victory for the Imperium.

There are those who claim that the Loyal 32 are not Saints at all. Rather, they posit that this is an elite unit of undying Perpetuals, using some ancient lost technology, maybe something like the Pharos, to reach the many battlefields they fight on. These people believe that it is the immortality of the perpetuals, rather than an Imperial Blessing, that grants the Loyal 32 the ability to fight in some many battles and over such a great time. This theory is Heresy and must be stamped out. Only the Holy Emperor may grant immortality. 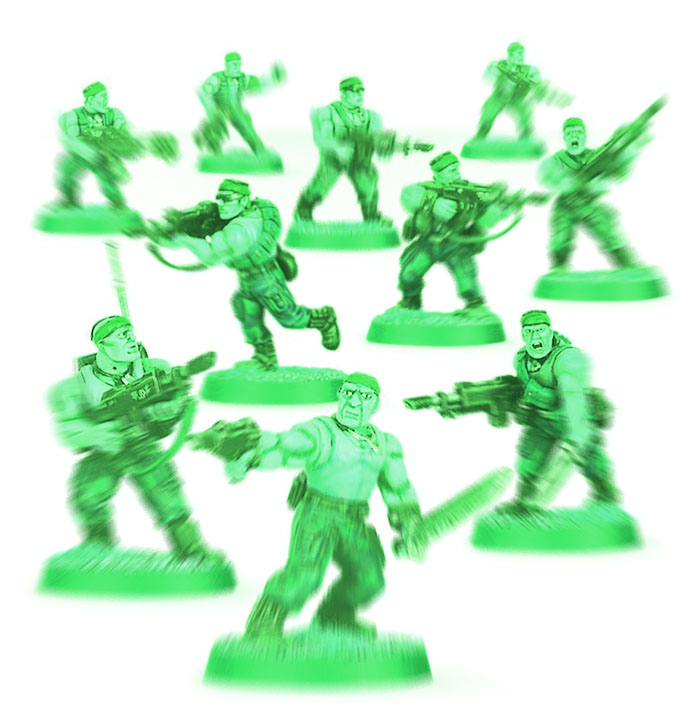 So there you have it brave commanders of the Imperial Forces. The next time you need more command points, the next time your elite army needs more bodies, remember the Loyal 32. These troops are not simply an over powered CP battery, they are Living Saints. Taking them isn’t cheesy, its fluffy! All those who want to curb the usage of this detachment are clearly heretics and servants of Chaos. As Dan Abnett wrote in Book Whose Title I Made Up For the Purposes of This False Example: “The Loyal 32 are a shining beacon of hope to all Imperial Armies, whenever the threat of destruction looms, whenever Imperial hearts flag, there they shall be, brave, indomitable, and possibly even painted, to stem the tide and save the day.”

I hope you’ve enjoyed this silly little attempt to justify the most used detachment in 40K. Let us know what you think about the Loyal 32, down in the comments, and remember they are only a can of white spray and bottle of green wash away from your army!