40K: Hitting The Bricks With This Lego Land Raider – Complete With Machine Spirit

This Lego Land Raider is a marvel of STC engineering. See how the technology of the Imperium can be put to use to crush the enemies of humanity, no matter the form it takes. The machine spirit animating this Land Raider must be mighty indeed.

We’re back with another 40K Crossover, more Legos–but this time there’s an intriguing new twist. User Scharnvirk-Jerac is clearly a member of the Adeptus Mechanicus, for this Land Raider is no mere idle vehicle, awaiting a human pilot to power it. Watch as it takes a battle to the vile Orks all on its own, using the power of Lego Robotics to not only motivate itself around the room, but to also control the aiming of its sponsons and turret weapons. This is truly incredible, and must be seen to be believed.

It truly embodies the unstoppable Machine Spirit of a Land Raider. I love all of the little details, the barrels of the lascannons, the triple lights/smoke launchers on top of the treads–there’s a lot that goes into this build. It’s a faithful recreation of a 40K Classic.

It never fails to amaze me how closely these Lego models resemble their plastic counterparts. Whether off the sprue or out of the bricks bin, the design of these vehicles is undeniable. Whether successfully recreating a Land Raider coming across some Orks… 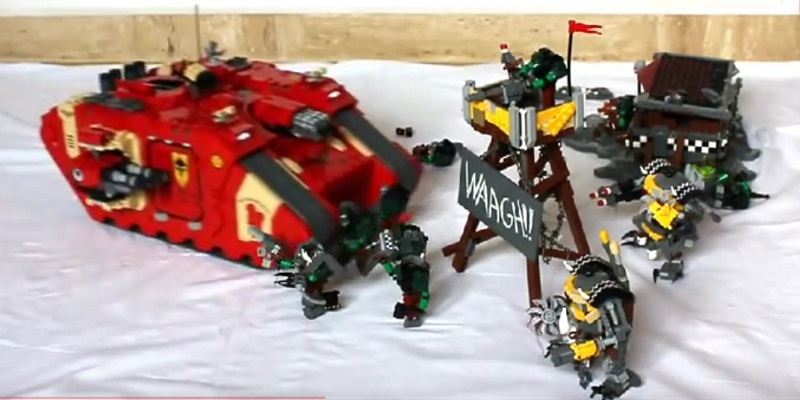 …or recreating some of the desperate last stands seen throughout the Imperium:

The Grim Darkness of the 41st Milennium can be found wherever you turn. So be ready loyal citizens of the Imperium, whatever plastic the greatest heroes of humanity happen to be made of, they will be all that stands between you and other, differenter plastic evils.

Got a favorite 40K piece made out of something different? Lego? Cake (holding out hope)? Share ’em in the comments.

Author: J.R. Zambrano
Bell of Lost Souls Staff Writer and DM, J.R. covers RPGs of all stripes and on occasion eats sandwiches. You can ask him about either at [email protected]
Advertisement
LEGO Space Marines Warhammer 40k
Advertisement