Since the release of the Imperial Knights Codex, Sir Hekhtur and his Knight, Canis Rex, have been missing in action. Well now they’re back from their adventures, and according to these early White Dwarf pics, ready to be pre-ordered week after next.

That’s right friends, thanks to the inevitability of time and the distributed network envisioned by Tim Berners-Lee or Al Gore, depending on which internet origin story you believe–I personally think that the Internet sprung fully formed from the head of Television in some Greco-American Mythological happenstance right out of American Gods, but I digress because–thanks to all of that, we have a whole bunch of pictures of the latest White Dwarf. And among them are the price and release date for Sir Hekhtur and Canis Rex. You’ve all been very patient to wait this long, so here have some: 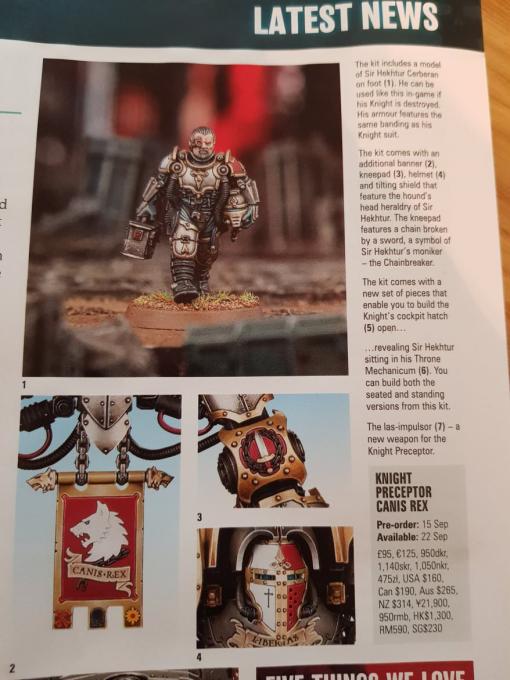 Look at Canis Rex up there, shining with majestic glory. Or is it glorious majesty? I get the two confused. The most important information here is, of course the pricing and release date. Hekhtur is coming out on the 22nd, with pre-orders going live on the 15th.

And of course, this means you’ll be able to build just a regular Knight Preceptor, which has the aforementioned Las-Impulsor, which is a pretty spicy weapon and adds a little more extra firepower to the firepower heavy Knight Codex.

That’s it for now folks, but stay tuned for more 40K news as it develops!