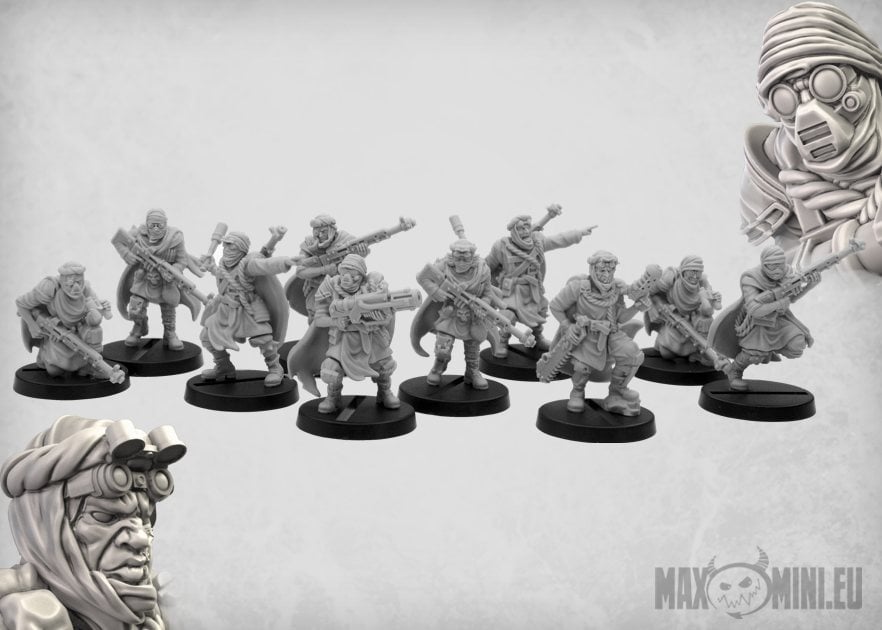 There’s a new batch of Desert Fighters from MaxMini.eu and you are going to want to take a look for yourself!

The desert can be on the of the harshest battlefields known to man. It’s hot, dry and there is sand everywhere which can clog engines and weapons. That’s why it pays to have a fighting force that knows how to survive in the dunes. Meet the Desert Dwellers:

Desert dwellers are a nomad tribe, scavenging the vast deserts of their home planet. Constantly searching for water, food, weapons, abandoned tech and scraps of metal, these silent warriors specialize in guerilla warfare, swift and silent ambushes and covert operations behind the enemy lines. If you wish, you can hire them to join your forces – at a price though. Have in mind though, that a 10 men squad of these fine soldiers is way more lethal than dozens of regular grunts. After their job is done they simply vanish in the desert, never to be seen again.

They fight with desert power…

Author: Adam Harrison
Writer, Editor, Texas Native, and Austinite for 15+ years, Adam covers all things Tabletop Gaming. Which includes Warhammer 40,000, Age of Sigmar, D&D, Board Games and everything else that involves dice, boards, cards and a table. A hobbyist, player, and collector of miniatures and games, Adam's current obsession are his Death Armies for Age of Sigmar, his Blood Angels and Tyranids for 40k, and his ever growing Arkham Horror: The Card Game Collection.
Advertisement
Maxmini Miniatures Tabletop News
Advertisement

FW: The Van Saar Upgrade Packs Are Up For Pre-Order