Warhammer 40K Mechanicus blends tactical, squad-based combat with the grim darkness of the 41st Millennium. Come get a taste of the action in this hour-long gameplay preview and developer interview.

I am super excited about the upcoming X-Comlike game, Warhammer 40,000: Mechanicus. Doubly so after wading through this gameplay preview, which showcases all the customization and options you’ll have to outfit your Skitarii and take them into battle against the forces of the Necron. Everything we’ve seen so far looks incredibly satisfying, from the custom augmetics that you can load each of your troopers with, to the fact that you can include the death dealing Kastellan Robots in your party, this game could be amazing. Take a look for yourself, care of Party Elite games.

Alright, so let’s break this down into three different phases. Again, there’s an hour of gameplay to get through, but a lot of it shows off the depth of the game. Which is what will make this fun to keep coming back to even once the story is done. So the first phase is the story/mission select phase, which we get a brief glimpse of early on. We learn there’s a time limit built into the game–30 Actions before Awakening, and that takes us into some of the early choices you’ll have to make. 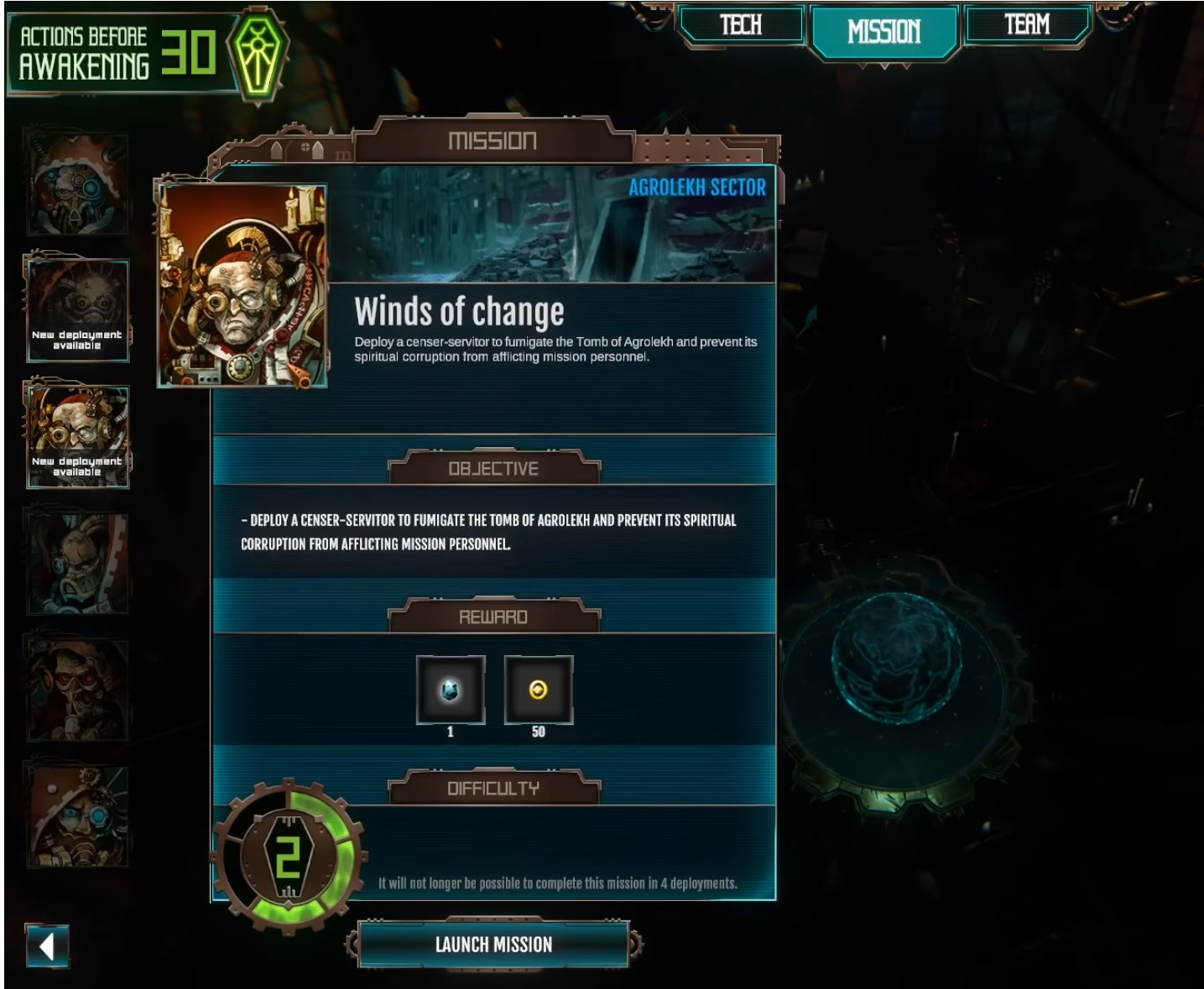 Each deployment can change the number of missions available to you, and from the text there, it looks like you’ll be racing against time to try and do what you can before the Necron Tomb fully comes online. Additionally though, each of the characters you see on the side there is a different personality you’ll be interacting with. But more on those in the video.

Now let’s get to the real fun: building a squad. If you’ve ever played an X-Com game before, you’ll know that half of the fun is in outfitting your squad. And in Mechanicus, there’s a lot on offer here. Whether it’s figuring out the right kind of weapons or augmetics to take, or the right powers to increase your elite members with, there’s a lot of depth to play with here. 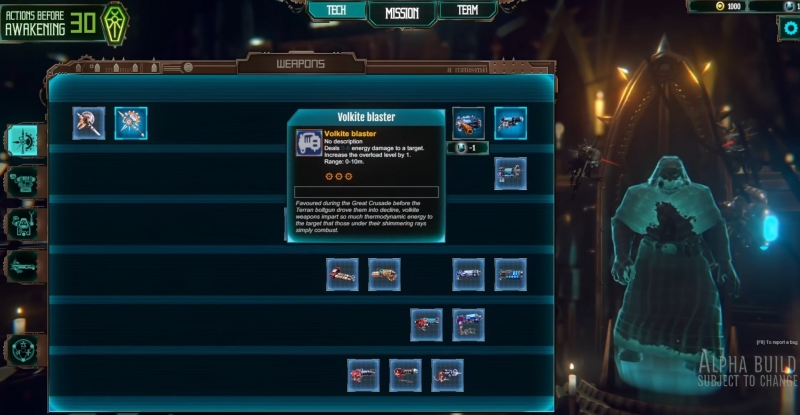 This is the kind of thing that keeps you coming back again and again. There’s a lot to choose from. Weapons, support items, tech-priest disciplines to pick from… 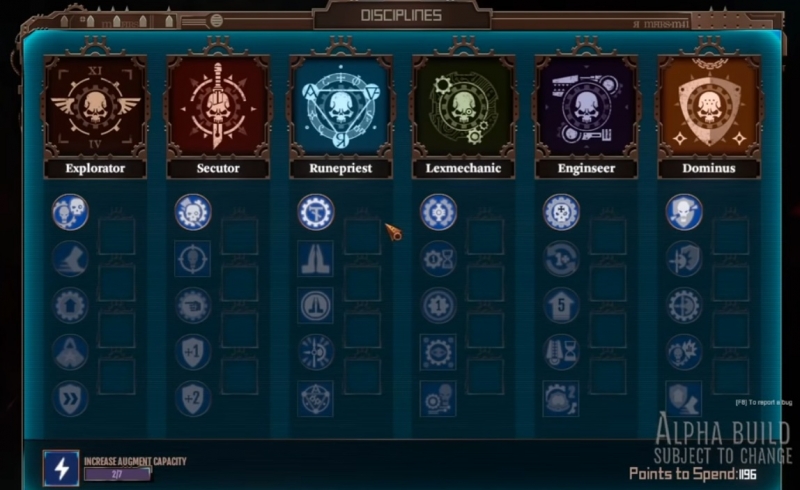 Add to that different Canticles of the Omnissiah you can sing in binharic glory, and you’ve got a recipe for a different playstyle each time you come to this. It’ll be up to you to find one that suits you–but there’s so much you can play around with. Watching the video I just want to dive into each of these fields and learn about how they change my squad. 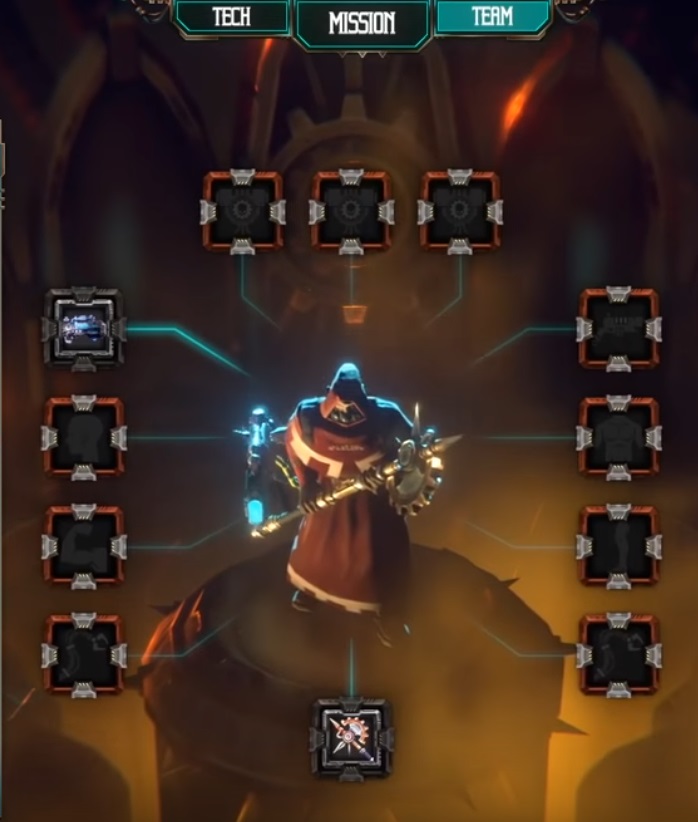 Finally we come to the gameplay itself. It’s X-Com style tactical action against a tomb full of slowly wakening Necrons, including a dormant Necron Lord, who will be hunting these intruders down as soon as is possible.

So make the most of each deployment. You’ll need the full might of the Omnissiah and all the gear and augmetics of the Adeptus Mechanicus to be ready to take down the enemies of the Imperium and claim Blackstone…clearly for the benefit of all humanity, and not for some sinister, Adeptus Mechanicus agenda that will eventually result in the replacement of biological life with the glorious machines of the Omnissiah.

40K For the Masses: How To Build A Killer Campaign - Part 1 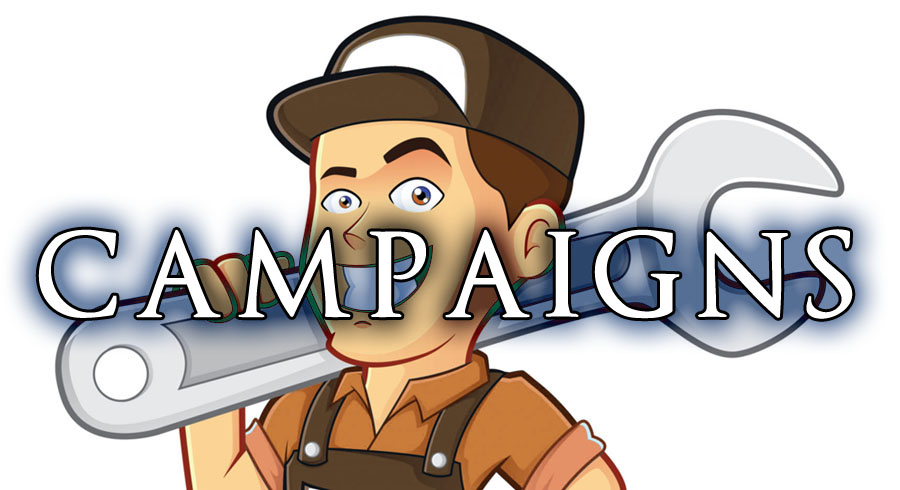