Orktober continues on, the green tide roaring. This time, Snakebites step into the spotlight, with their mastery of da old wayz and two new psychic powers previewed within.

The Snakebite Clan is known for having the toughest boyz and shunning technology. Their mastery of ‘da old wayz’ means they are hardy, and can call upon unexpected kunnin’. Let’s take a look at the hardy warriors of this clan.

As the Lexicanum points out, Snakebites prefer tradition to technology, shunning things like forcefields and vehicles in favor of protecting themselves with war paint and riding into battle on huge boars. Depending on how fundamental they are, they may remain as Feral Orks even after their civilization can advance to the next stage. Snakebites’ symbol is the venomous serpent, and they always take some along so they can have initiation rituals where Orks endure being bitten. This engenders toughness, for bigger, beefier boyz. 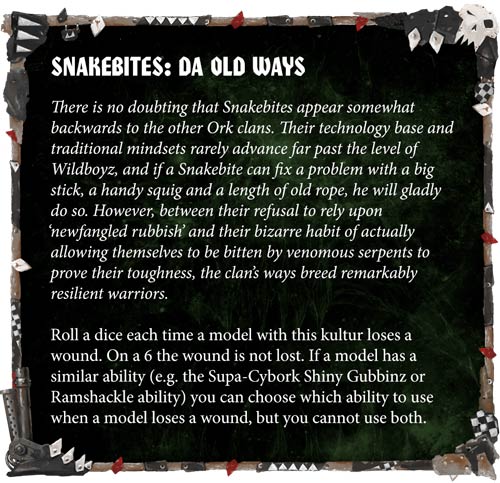 The Snakebites are the most traditionalist of the Ork clans. In practice, their rugged lifestyle makes them better survivors, determined to show the other clans that “da old ways iz da best”. In-game, this is represented by a Clan Kultur that makes your Orks a little bit hardier than anyone else.

Feel No Pain is always great, and this means your bunch of boyz will make it through to the enemy lines intact. But it also means that your vehicles (such as they are) will last longer and drive a little harder. And with Stratagems like Monster Hunters, you can ensure that any Snakebite unit is ready to hit harder when they need to. 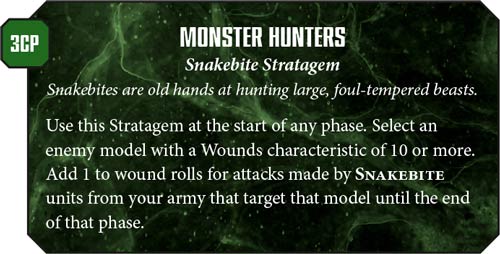 Now this Stratagem is expensive, at 3CP, but it means if you can manage +1 Strength, you’re wounding even Titans on a 4+. Which, on a mob of boyz making buckets of attacks, is a pretty great place to be. This helps your mobs punch above their weight–but only for real hardy models.

The other notable thing for Snakebites is their mastery of psychic powers. After all, if you want to melt your enemies without having to use plasma, the Warp is a “safe” bet. 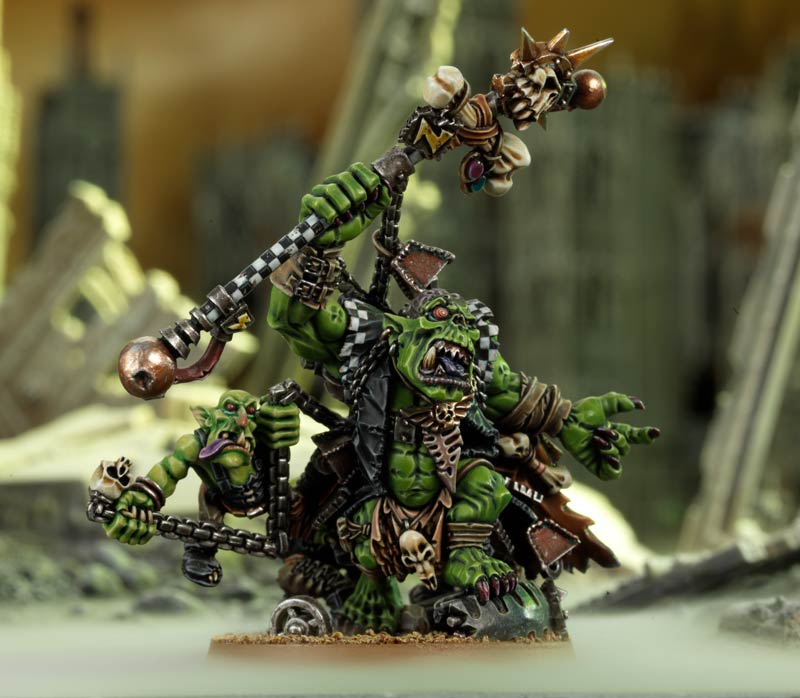 The 41st Millennium’s least predictable psykers are better than ever in the new Codex: Orks – and perfect for any Snakebite Warboss looking to melt their enemies without muckin’ about with any new-fangled technology. For one, your Clan Kultur gives you a 6+ save against any self-inflicted mortal wounds from Perils of the Warp (of which there will be many). For another, you’ve got some awesome new powers to play with – like Fists of Gork: 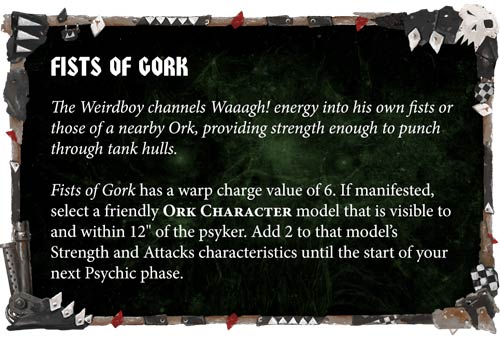 Slap this on a Warboss that has the rumored +1 Stregnth +1 Attack warlord trait, and then hit them with Warpath from another Weirdboy, and you can turn your Warboss in Mega Armor, or even Ghazgkhkull into a cuisinart, capable of taking down anything that they are set against. Plus once your Warboss explodes from all this psychic energy, you’ve still got a Psyker there, who can call down a returning favorite, the Foot of Gork (or Mork). 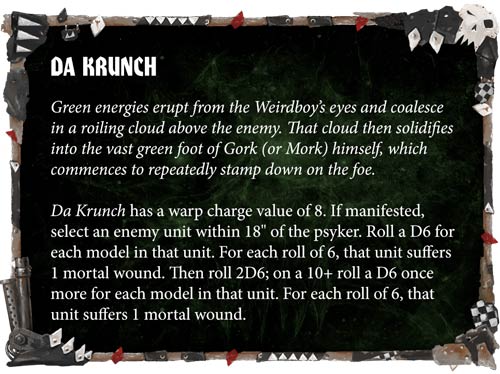 This is the spirit of the Orks embodied in a single power. Roll a bunch of d6s, then, potentially roll a bunch more d6s. How many sixes can you roll? It is the pinnacle of Orkish strategy, if you just keep rolling sixes, eventually your enemy won’t be able to fight.

What do you think of these new rules? Let us now in the comments!