That’s no moon–it’s a battlestation capable of devastating an entire fleet unto itself, while also serving as a homeworld to the Imperial Fists. It’s massive and massively armed, come take a look at Phalanx, available soon in Batlefleet Gothic Armada 2.

Phalanx is a massive battleplatform. Space station, carrier, homeworld to an entire Chapter of Astartes. With enough weapons to fend off fleets’ worth of enemies, this is one of the more devastating weapons in the Imperial navy.

This mobile-battlefortress is massive. How massive you might be wondering?W ell you can see the battlecruisers streaking by in front of it–and of course there’s this from Lexicanum which details the massive station in detail.

Phalanx is believed to have been constructed during the Dark Age of Technology, predating the Imperium. The vessel was discovered by Rogal Dorn prior to being reunited with the Emperor of Mankind. Upon encountering his father for the first time, Dorn was manning the helm of Phalanx, which he offered to the Emperor as a gift. The Emperor declined and willed that Dorn use the ship in carrying out his command of the VII Legion.

Phalanx is gigantic, the size of a small moon and is said to shine like a star. During the Great Crusade, the awesome magnitude of the ship served as a symbol of the coming era of the Imperium. 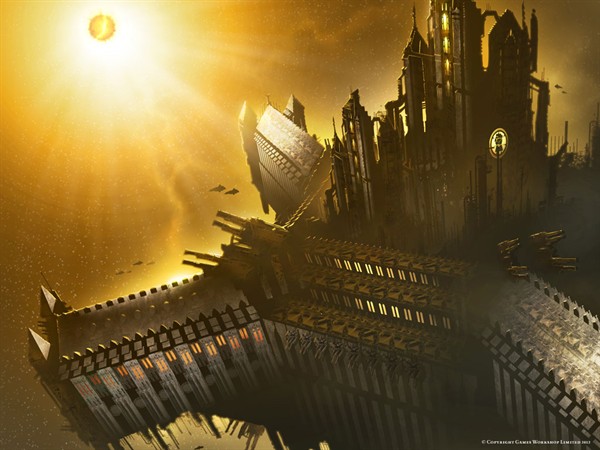 The interior of Phalanx incorporates stone corridors, archways, and cathedral elements. As of the very beginning of the Horus Heresy, the starship featured a gallery that displayed the battle honors of the Imperial Fists, which stretched for kilometers. Of course, the ship continues to house Chapter honors and relics. Among the most prized are the Remains of Rogal Dorn and the battle honor Roma.

However, sources differ on the general shape and exterior character of the ship. The different descriptions include:

The massive foredeck was able to accept large transport ships, including the High Lords’ ship Potus Terrae, the equivalent of a light cruiser. The dock itself had a massive atrium covered in ornate panels and had four large, decorated docking corridors that allowed entrance into the ship. The concourse was huge, over 100 meters high with a domed ceiling decorated with Legionary and Chapter victories. A 30 meter wide diamond sat at the top of the dome, the walls held beautiful reliefs, and the marble floor was further decorated with a mosaic of Imperial Fist imagery. At the other end was a massive staircase leading to a kilometers long hall containing various trophies of conquest.

Battlefleet Gothic Armada 2 is out early 2019