Star Wars: Legion has two more expansions coming soon. This time it’s ‘personnel’ with Rebel and Imperial Specialists heading to a tabletop near you!

The war between the Rebellion and the Galactic Empire had many conflicts outside of the big battles. There were lots of nameless heroes that fought in those conflicts as officers or rank-and-file troopers. The Specialist Expansions allow you to add some of those unnamed heroes to your army now, too. 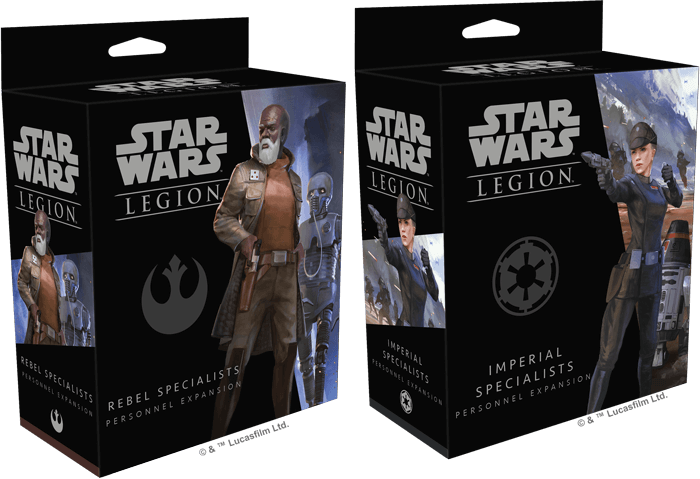 In each of these expansions, you’ll find everything you need to incorporate these specialists into your Star Wars: Legion units. Four finely sculpted specialist miniatures, including an officer, a comms specialist, a medical droid, and an astromech droid stand ready to support your units, while three new command cards give you the chance to further hone your battle plan and plot your strategies. Finally, an array of upgrade cards let you further customize your units, turning them into crack teams of soldiers. Releasing in the first quarter of 2019, these two expansions open up new possibilities for your Star Wars: Legion armies!

Both of these expansions will add 4 new miniatures that each brings something different to the tabletop. For instance, the officer is an alternative commander to the more famous (and expensive) unique character like Luke or Vader. They come with three new command cards and can cheaply fill that role so you can spend points on more troopers or other units that you might want to run.  Also, officers can alternatively be added a specific unit as a leader to add benefits to them as well. 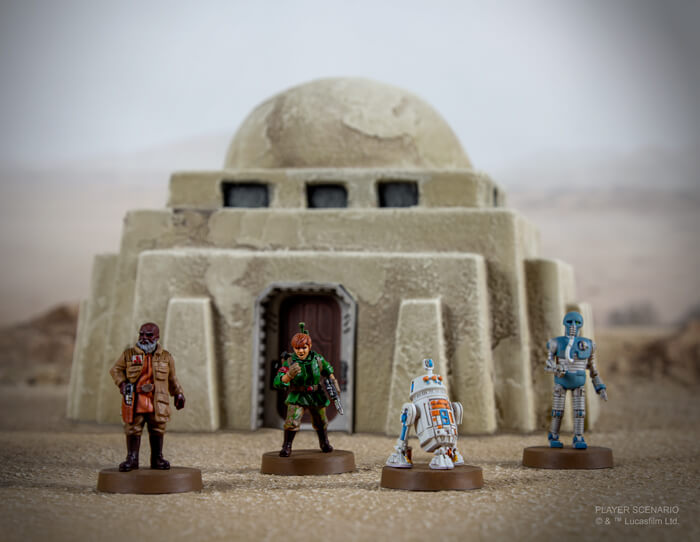 It’s not just the officers either – all of the miniatures can be added to units to grant upgrades. Units with Personnel upgrade icons can include these models and that can make for some interesting strategic options. Rebel Troopers could add the Comms Technician to their unit which can expand your options to dish out orders to other units. Or they can be used to disrupt the enemies comm signals: 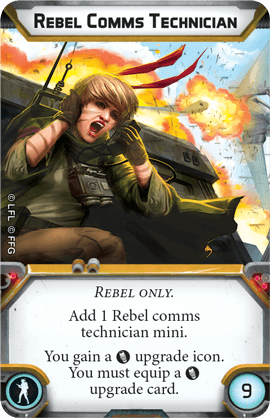 In FFG’s full article, they were only teasing a few of the options that will come with these expansions but you can be we’re going to see a lot more about them in the days to come. These two new expansions are coming out in Q1 of next year so there is plenty of time to prepare your forces later. 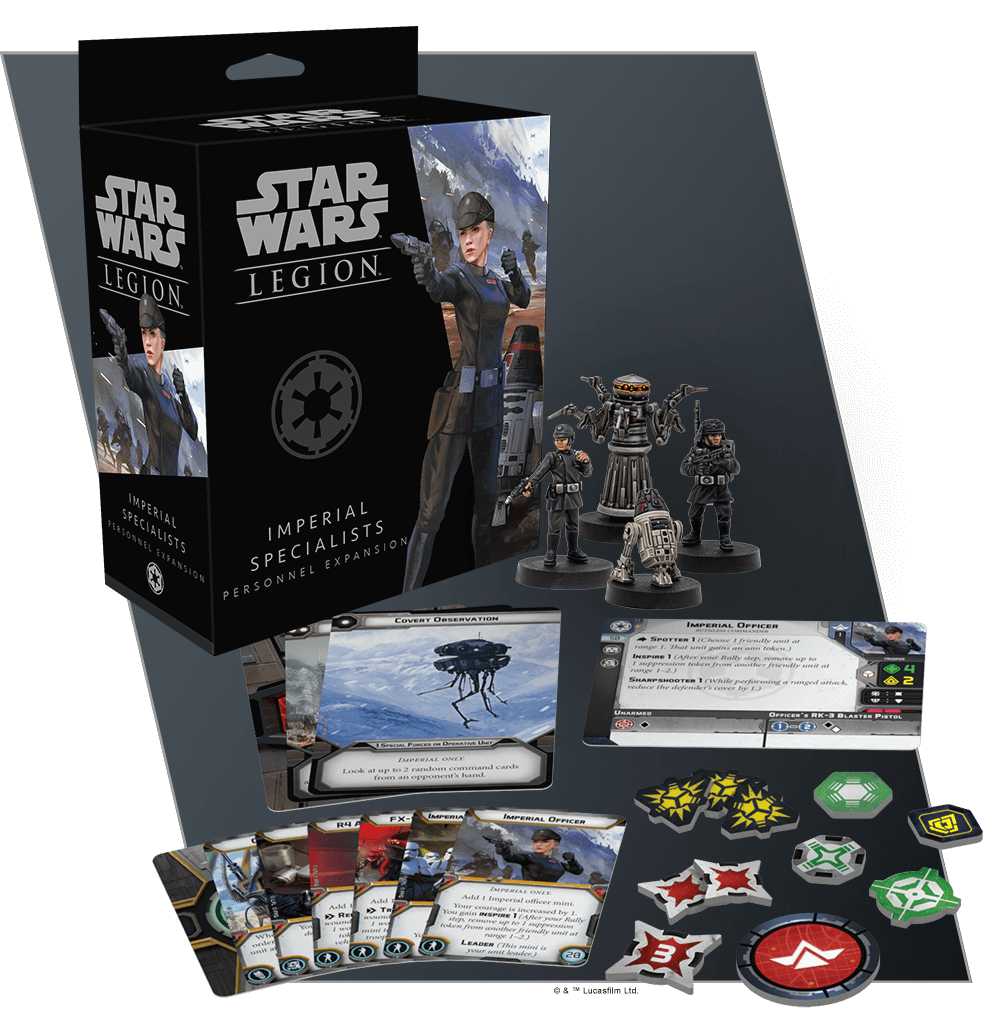 Armies are more than just soldiers. To wage an effective war across the countless battlefields of the Galactic Civil War, the Galactic Empire needs recruits who can do more than fight.

This expansion for Star Wars: Legion contains four finely sculpted Imperial specialist miniatures, along with new unit, upgrade and command cards. This expansion allows a player to field a generic Imperial commander unit and to add a comms specialist, medical droid, and astromech droid to other units in their army. 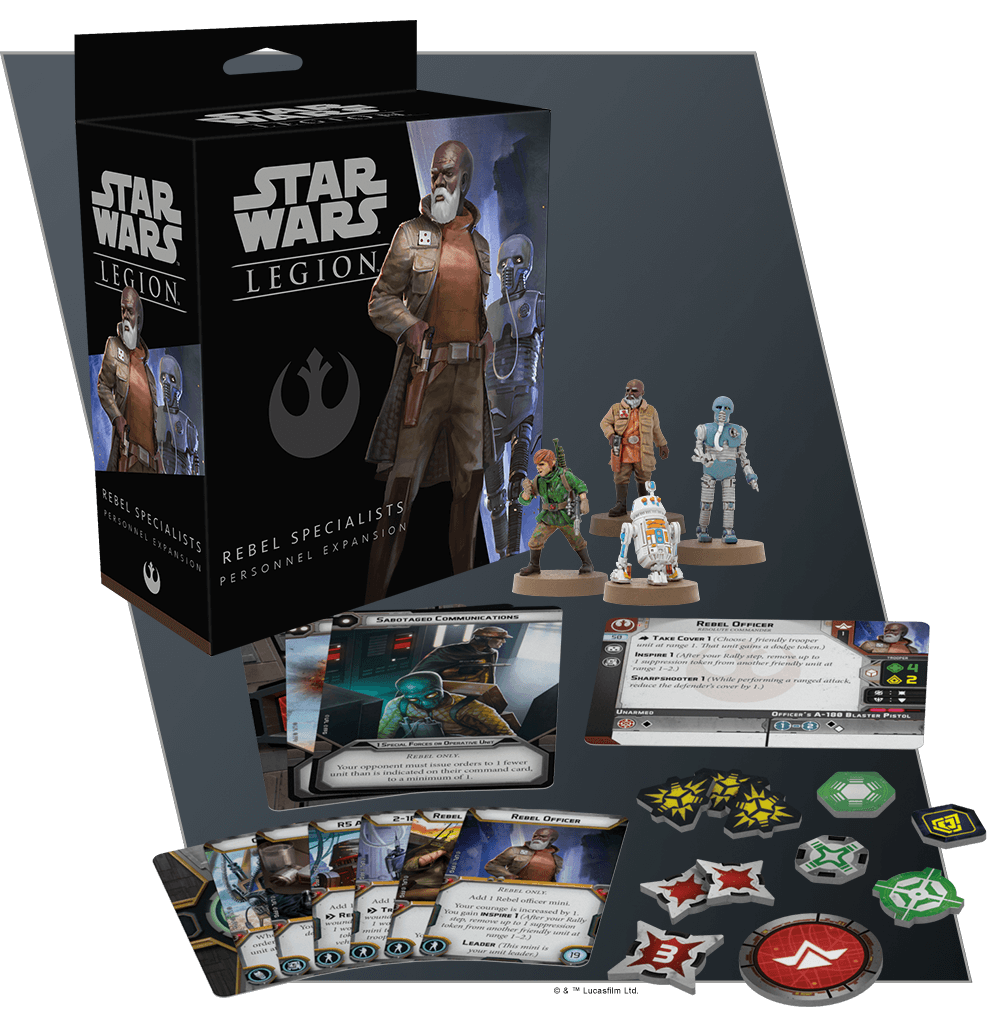 Armies are more than just soldiers. To wage an effective war across the countless battlefields of the Galactic Civil War, the Rebel Alliance needs recruits who can do more than fight.

This expansion for Star Wars: Legion contains four finely sculpted Rebel specialist miniatures, along with new unit, upgrade and command cards. This expansion allows a player to field a generic Rebel commander unit and to add a comms specialist, medical droid, and astromech droid to other units in their army.

I think the medical droids have a pretty obvious role – but the astromech droids? Anyone want to take a stab at what they will do on the battlefield?