The Rumor Mill is spinning up again and this time they are going into overdrive for Chapter Approved 2018. Check out what’s on deck to get hit with the Nerf Bat and what’s getting a buff!

It looks like the up coming Chapter Approved 2018 has sprung a leak and info is finding it’s way online. We’ve got lots of points adjustments across the board and some more teasers about Sisters coming. Just remember, these are considered rumors and standard salt caveat applies: 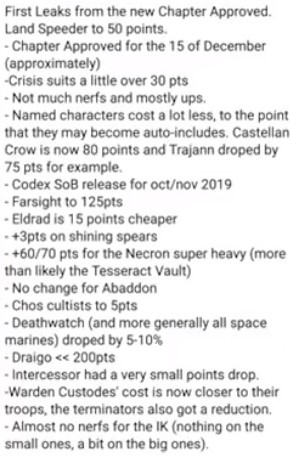 Now these rumors are pretty light – lots of points tweaks but there are a couple of big ones in the mix:

Again, I want to stress this, these are RUMORS. Some of the things in this list are very suspicious while some of the items are no-brainers. Could this list just be a fabrication by a fan or is this a legit leak? I guess we’ll find out in a few weeks. For now, let the speculation begin!

What do you think of these leaks? Do you think they are true or is someone pulling our collective legs? Let us know in the comments tab!