D&D: Ranking Up With Ravnica 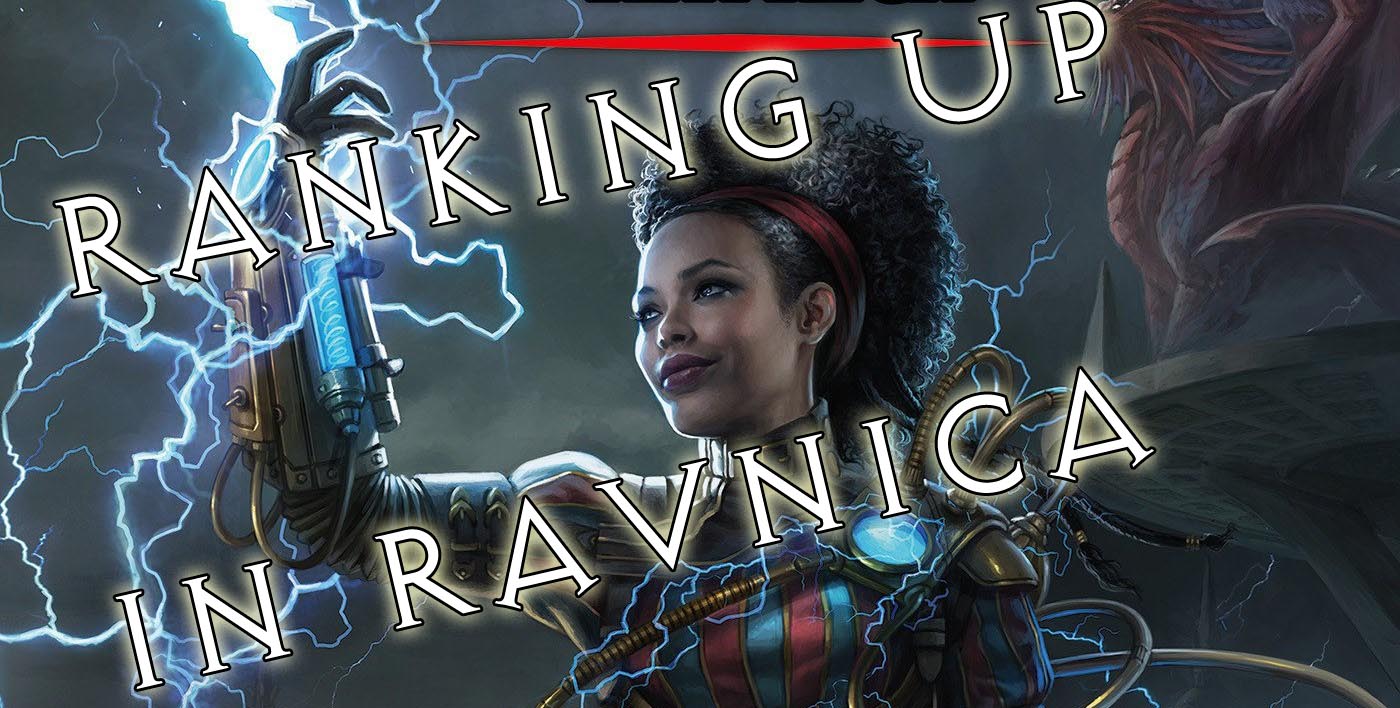 The new Guild Rank system in the Guildmaster’s Guide to Ravnica is an innovative reward that increases player agency and immersion.

The Guildmaster’s Guide to Ravnica does a lot of work–it introduces a setting, introduces new player options, a swath of new lore, and a ton of helpful tools for DMs looking to increase immersion or build party cohesiveness. In short, this book is amazing and you should get it, but we’ve already told you why it’s so great in our review. But where it really shines is in how it brings the Guilds to life. It doesn’t just say “here are these Guilds, this one’s the evil one, these lot are kind of pants, but everyone loves them; ooh look here’s an evil demon circus, isn’t that fun?” No, the Guildmaster’s Guide brings these Guilds fully formed into your world. Ravnica feels like the book that the Sword Coast Adventurer’s Guide wanted to be. 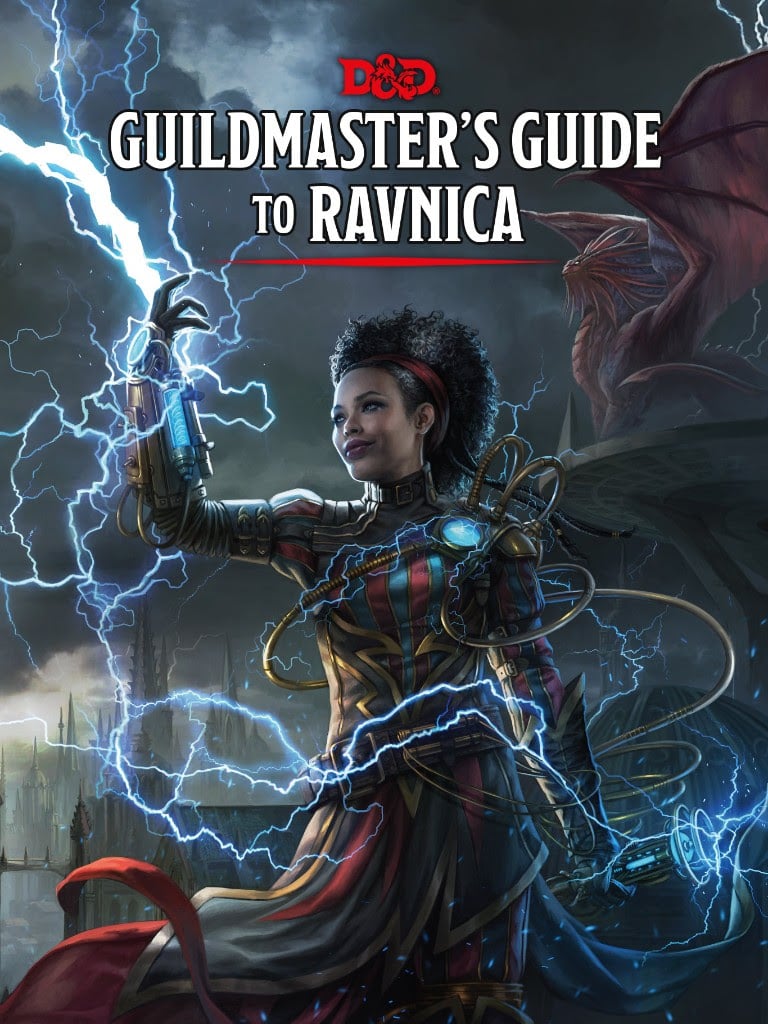 And a big part of that is because it understands that players and DMs need to be able to feel how the world is meant to work. But wait, you might be saying, half the fun of D&D is figuring out my own world–and this is true, but in order to start co-opting systems to power your homebrew D&D campaign that’s loaded down with custom tables and house rules you’ve inexorably woven into the rules–you first have to see what the thing does. 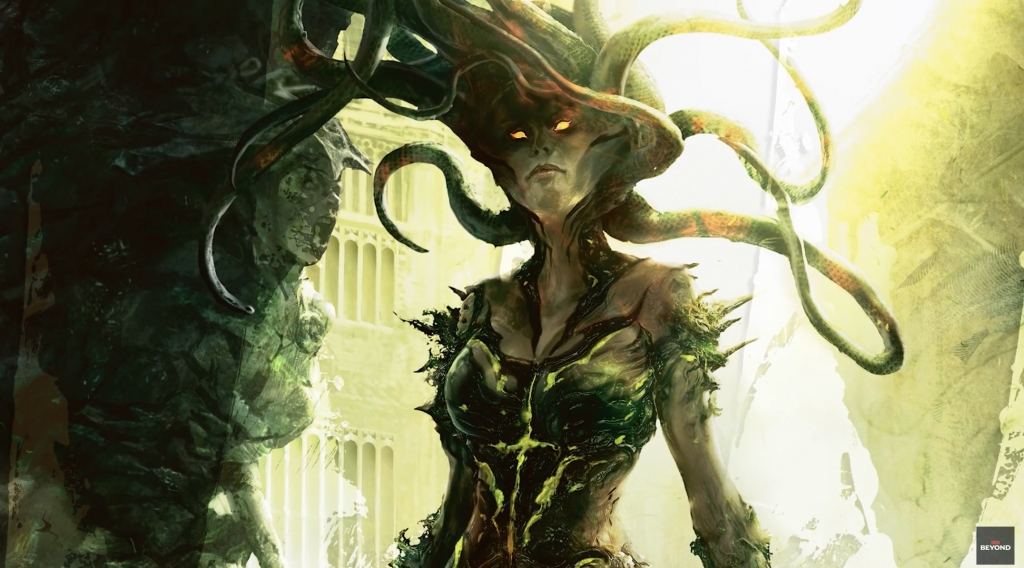 It’s like seeing a wheel turning and moving something before you stop and think, ‘hang on, I could use this to do some heavy lifting if I just wrapped a string around it.’ And the Guildmaster’s Guide to Ravnica is full of these expert little flourishes that make the game hum. Today we’re talking about the Guild Ranking system. It draws on the skeleton of faction renown rules that you can find buried on pages 21-23 of the Dungeon Master’s Guide. Which is amazing–it fleshes out this subset of rules that are actually kind of bland in their native setting. The gist of the Faction rules are “a faction is an organization, you should think about what they do and how they fit into your world, and how players might interact with them,” but offer very little guidance otherwise. And Renown is something that you might gain or lose from a faction, depending on whether you’re inviting them in for tea or inviting them in for tea and murder. 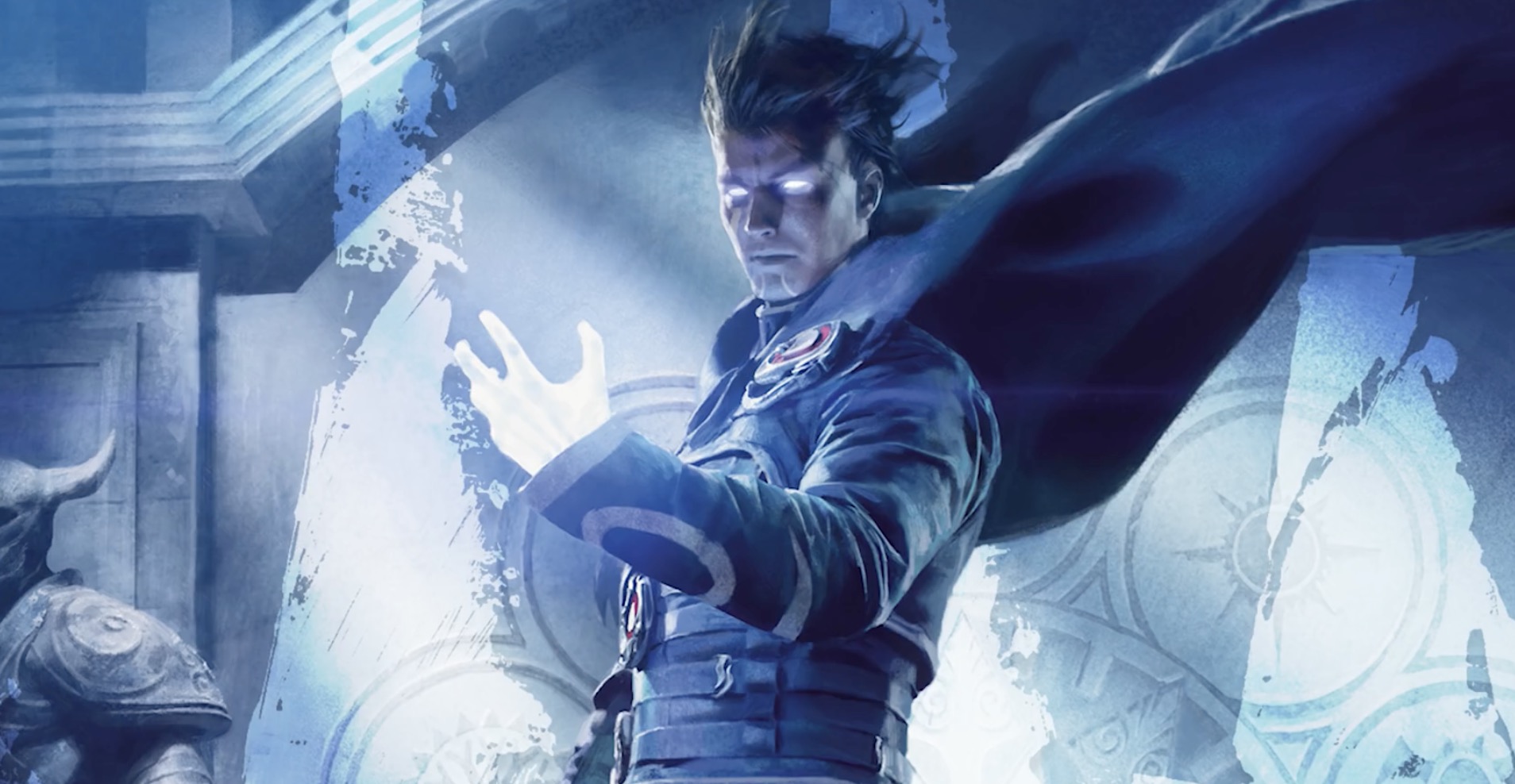 Ravnica on the other hand takes this framework and shows the work, and in doing so, shows you how it’s all meant to fit together. Like a long division problem that manages to make the math less intimidating by taking you through some example steps–when you see the system at work, it’s much easier to understand what’s at play. It’s such an artful system that does so much work without adding much complexity to your table. The key to it is, it’s chock full of ways that you can increase a character’s power level in ways that feel reflected in the story. Let me walk you through the way Renown works in the Simic Combine, and as we wade through the ranks, I’ll show you what I mean. 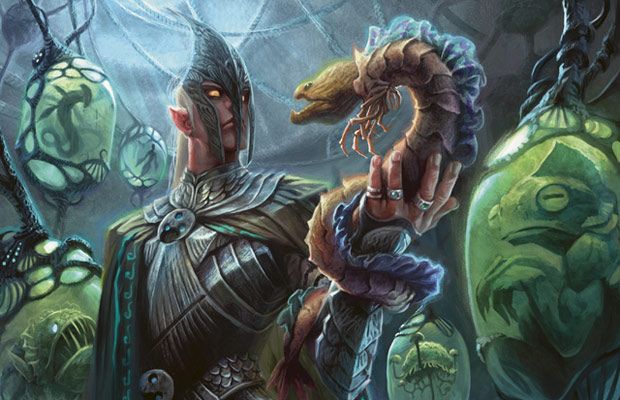 It starts with the basic assumptions of the world. If you’re playing a game using the Guildmaster’s Guide, it’s assumed you’ll be using this system. When you create a starting character and join a guild, you earn a Renown of 1 with that guild. And as you adventure this is a score that will increase or decrease depending on what you do. We’re following those zany bio-mancers in the Simic Combine today so things like conducting experiments and creating new creatures will help advance our Renown score, and we want to advance it because doing so gets us all kinds of cool things. 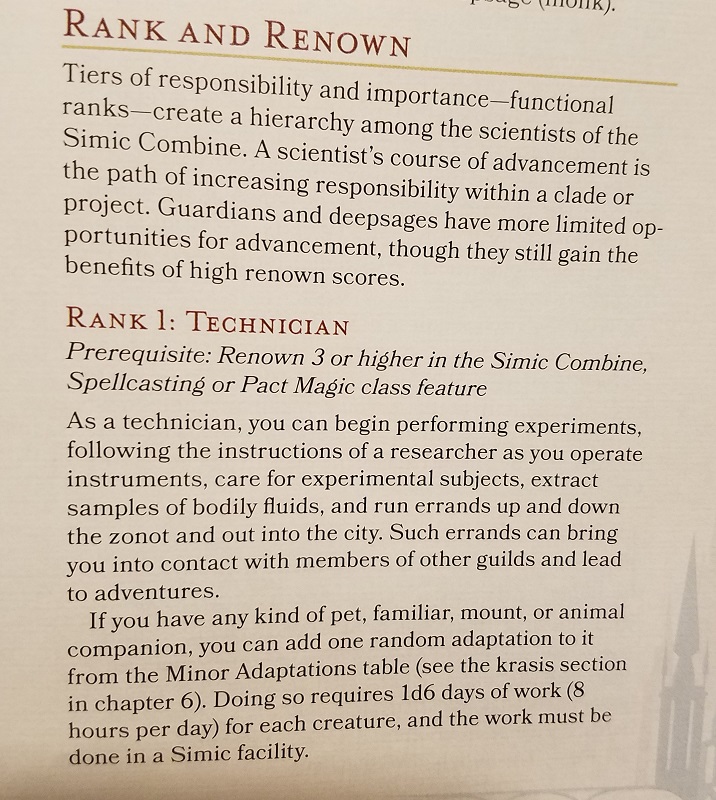 And right away there’s some cool stuff on display. All we have to do is a mission or two that benefits Simic and suddenly our character is someone who is being noticed by the rest of the faction. And that’s why I love this system–it puts the emphasis on the individual characters while still making them feel like a part of something so much bigger. Now that we’ve done a few things, there’s a concrete reward: our character can adapt their friendly, unsuspecting animal companion into a beautifully mutated monstrosity. 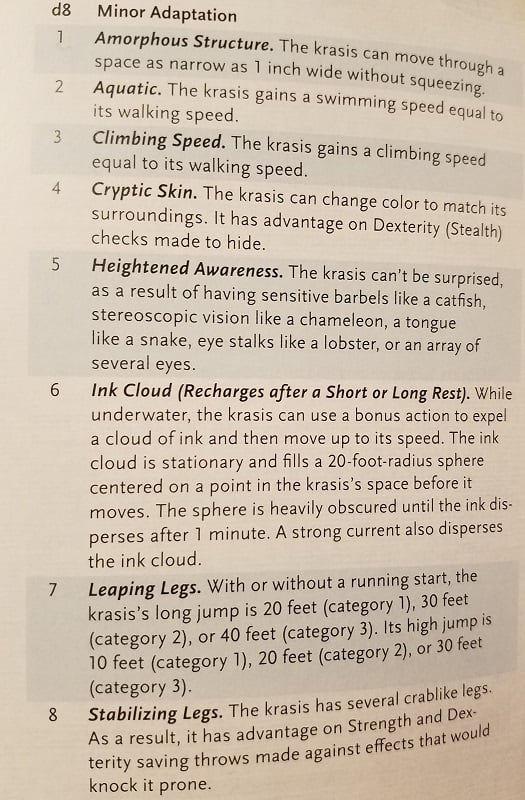 Each of these adaptations is rewarding to both the character and the player–you’re customizing your character, making it unique. You might have a cat that can squeeze into any space, or a scorpion that can leap 20 feet into the air to strike at foes. And yeah your character gains a pretty clear benefit, but it’s rewarding to the player, giving you a clear path to power you might not otherwise have.

But wait, gaining a rank also comes with expectations. As a technician you’re expected to follow the instructions of a researcher–you might be sent out on missions to collect bodily fluids from the monsters in the ruins where your party is sent. Suddenly there’s an extra layer to each mission. Suddenly there’s an NPC, a researcher, who cares specifically about what your character is doing. And as any player can tell you, that feels good. Knowing your actions have consequences is what we want out of D&D–and if those consequences are positive, that’s even better. We want to feel rewarded for our actions in the game, that’s part of the fantasy of it, and this is a great way for any DM to offer up a cookie to the player. More than that, it’s got structured guidelines for how to keep doing it. Say our technician starts doing bigger and better things… 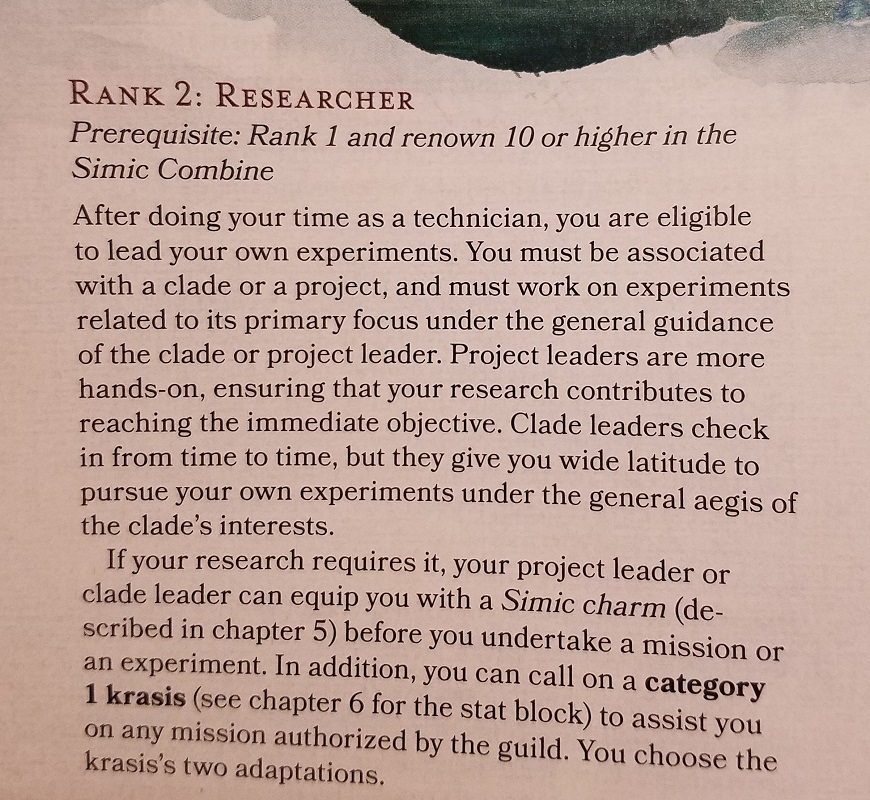 We might get promoted to a full blown Researcher, which means we can lead our own experiments. We get a little more autonomy, which is good because we’ve had all of Rank 1 to learn what exactly a Researcher does. And hopefully this is time to figure out how we fit in to the Guild. We have an NPC to show us what a successful experiment looks like so we can emulate and iterate when doing our own. Plus at this stage you qualify for one of the amazing Simic charms which are some fairly sweet consumable magic items. There’s one for each guild; the Simic charm lets you cast enhance ability, enlarge/reduce, or gaseous form once before vanishing.

But there’s more, you can also call upon the power of a Category 1 Krasis–a CR 1 friend who’s got two multiattacks and two adaptations (1 minor and 1 major) that can help customize them for whatever mission you’re about to undertake. 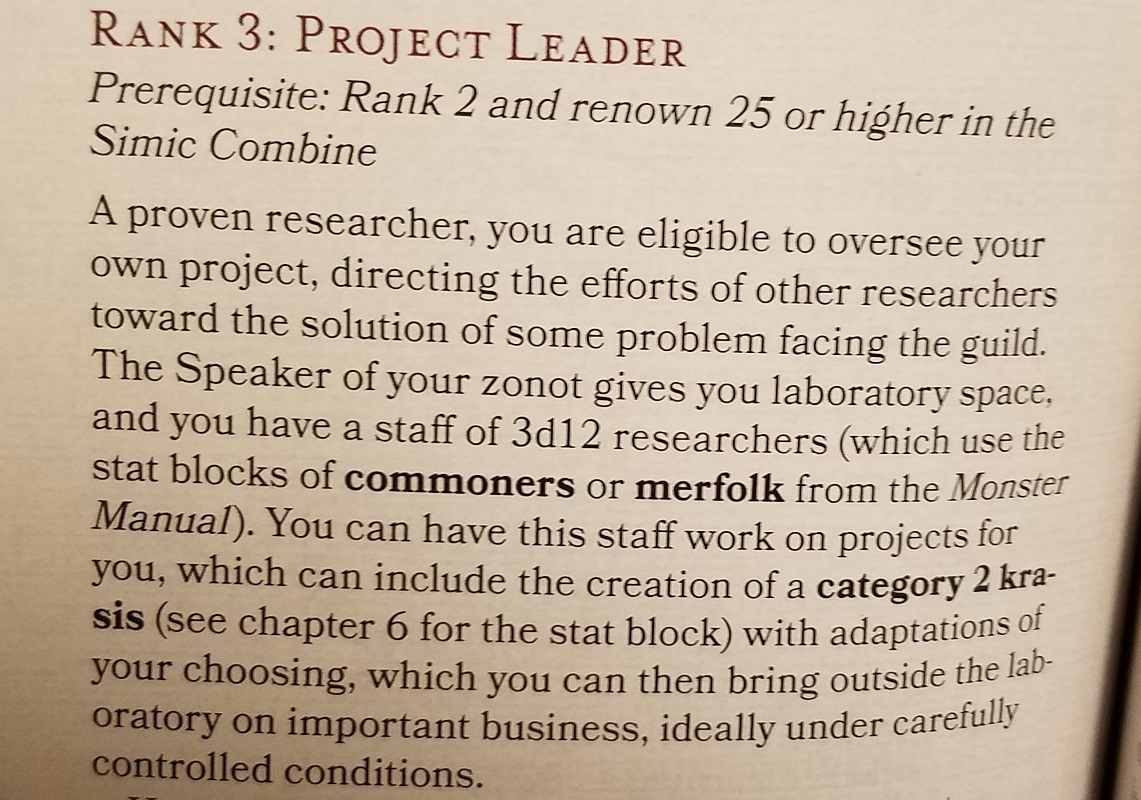 Rank 3 gives you even more responsibility and autonomy–and gives you more tools through which to do it. By the time you hit this, you’ve got a whole staff working for you. Your NPCs might even have names–suddenly you’re not just a random figure in the Guild, but you’re becoming someone important. You can have your guys get out there and make things, literally creating monsters that you custom design. But more than that, you have your own real estate in the form of a laboratory where that staff hangs out. And as we all know the whole purpose of having stuff like that is for it to get attacked, so there’s even more for you to care about. Even more to tie your character to the ongoing story of the game. 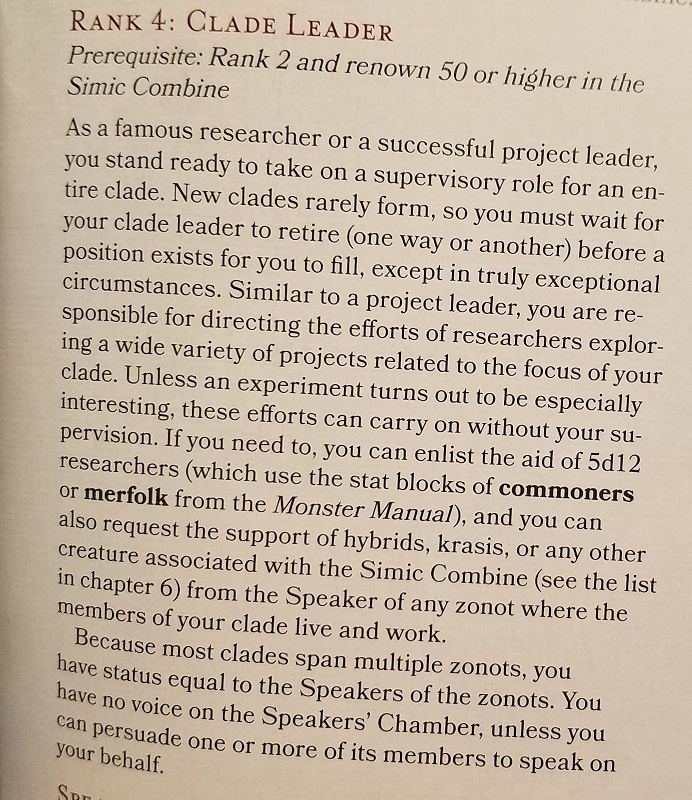 At rank 4 you’re a mover and a shaker. You have all kinds of intangible benefits (along with a few more tangible ones). You’ve got a whole list of associated creatures to call on–it’s a lot like the old Name Level tables from earlier editions of D&D. These were the rules that allowed for higher level players to settle down and build a castle/druid’s grove/floating metal wizard sphere and attract some followers. Only there’s a clear system for what’s expected of you as well. And a guideline of what sort of followers you should be attracting at any given point.

But what if you don’t want any of this? What if your character isn’t a scientist? Well the Guildmaster’s Guide has you covered as well.

There’s a whole special role that has its own list of (not pictured) rewards, which include calling upon the vaunted Simic charm, as well as some of Simic’s special agents–you can get some NPCs, not just monsters, to help you out. And these agents are no joke. Depending on what you’re doing you might call in the equivalent of Simic Strike Force Omega. Heck you might be leading Strike Force Omega (hang on let me go write up a new campaign). 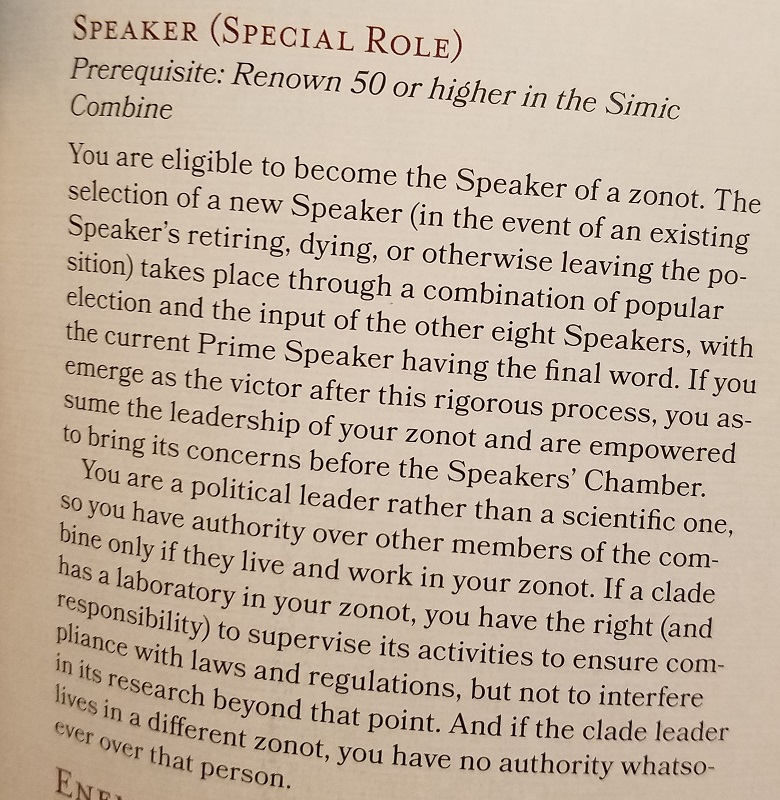 And it’s this last rank that I really like. It’s something that says to the players you can’t do this. At least not without trying. It lays down the gauntlet, so to speak. There are some very strict requirements to being a Speaker–you either need to find a new Zonot (which is an adventure in and of itself), or you have to create a vacancy, whether through subterfuge or honest service. But it’s a clear goal to work towards. Something you can’t immediately, or even easily, go out and do–but something to pursue as you advance through the ranks as something else.

There’s a system like this but different in place for each of the Guilds, which means you get a good look at how flexible these rules can be. Whether it’s the even more rigidly structured and hierarchified Azorius Guild, or the specialist-filled ranks of the Selesnyans, there’s plenty of examples for aspiring DMs out there. In researching this for the article, I lifted several of these mechanics for my own campaign, and put together a Thieves’ Guild for a few of my players who’ve just made their way to a big city for the first time.

I love content like this. It’s inspiring to both player and DMs. It gets you thinking about the world of the game, pulls you further into it, so you can start thinking about what you want to do two or three sessions from now. That kind of engagement is invaluable, and it drives home the wonderful parts about any kind of tabletop RPG. Whatever you can think of, you can do. And here’s a bunch of ways to do exactly that.