Wyrd: The Carver Joins ME3 as a Legal Model – Check Out His New Rules

The Carver model is fantastic, but in previous editions it’s ended up sitting on the sidelines. That is changing. The scarecrow has made it into the new edition with some nice abilities and some allies.

The “use if the Strategy allows it” restriction has been removed, and the Carver is now a legal model that’s ready to cause a frenzy on the the tabletop. He looks like a fun addition, if a bit expensive at 10 points. The Carver is a henchman that has the Nightmare and Woe Keywords, so he can be hired by those two factions with no penalty. Enemies will have to deal with his Terrifying Ability any time they attack him, and he’s got Feed on Fear to help him stay upright in a fight. He’s armed with Action is Breath of Fire, Glimpse of Insanity, and Shears to take a chunk out of his opponents.

Wyrd goes over his card point by point… 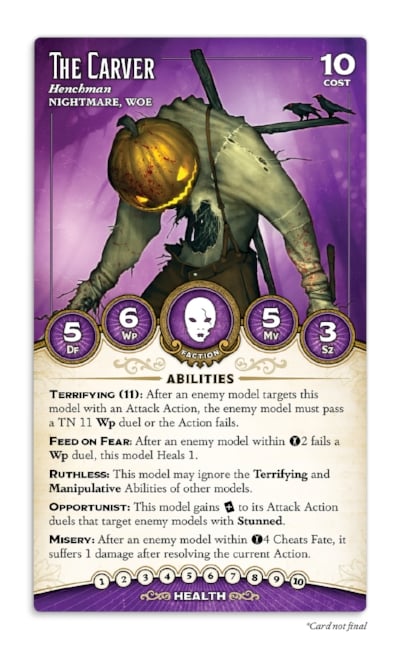 So right off the bat, you’ll notice that the Carver has a high Cost of ten, making him one of the most expensive non-Master models in the game. In M2E, models with a Cost higher than ten were in an awkward space; they had to be strong enough to justify their impressive Cost, but this often led to them having rules that were so strong they distorted games (and their Faction) around them. Nekima and Ashes and Dust are prime examples of this effect.

In M3E, we are capping the Cost of non-Master models at 10. The one exception is the Coryphee Duet, due to the interesting way that it can combine and break apart during the game (though that’s an article for another time). Capping the cost of non-Master models at 10 means that we have a ceiling on how powerful those models could be while ensuring that they don’t have to be so powerful that they would distort their Faction’s balance. 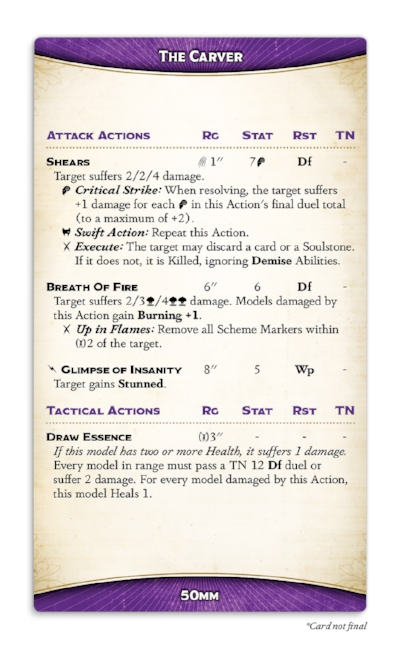 Flipping over to the back side of the Carver’s card, we have its melee Action, Shears. Engagement ranges and average damage have both dropped in M3E, but even then, 2/2/4 isn’t particularly great for a 10ss Henchman like the Carver. What makes up for it is its stat of 7, which is among the best of the best, and his built-in Ram, which allows it to automatically hit its Critical Strike trigger to jump up to a 3/3/5 damage track… or 4/4/6 with a Ram card or a spent Soulstone!

Read the rest of the sneak peek at The Carver here!