With Genestealer Cults around the metaphorical corner, more rumors are coming out of the woodwork. Here’s a look at rumored stratagems and warlord traits.

The Genestealer Cults are an army that’s known for being sneaky, using ambush and infiltration tactics to blend in and accomplish their objectives, and for layers of deception wrapped around an all-devouring truth. The same holds true for their rumours, as we’ve seen even more fakes and other trickery around this particular codex.

While it all seems appropriate, just bear that in mind, and maybe take them with an extra grain of salt–that said, is not unreasonable to expect some leaks at this point. These come to you from Blood of Kittens and show off their rumored Warlord Traits and Stratagems.

via Blood of Kittens

First up, have a look at these Warlord Traits: 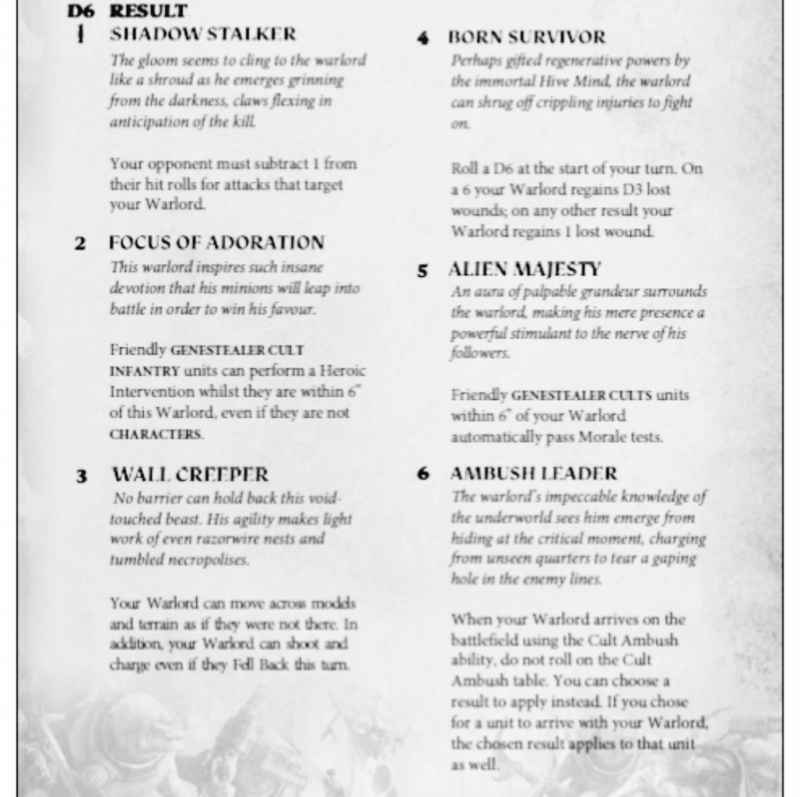 These certainly seem reasonable, and even play with Cult Ambush. Of these six, the -1 to hit is probably the most consistent one, but Wall Creeper does make for some interesting charges across tall terrain.

On the Stratagem Side of things, there’s a lot to dig through, so let’s take a look:

Now many of these look familiar. Numbers Beyond Counting makes a lot of sense–Tide of Traitors is already the perfect stratagem for Chaos Cultists, these other Cultists may as well have it too. And the 1CP/Ignore Cover stratagem I think we’ve seen before.

Far more amusing–and fitting are the Sabotaged and Final Detonation abilities, which seem particularly on brand for the GSC.

At any rate, that’s it for now. Be sure and check back for more rumors and news as the codex creeps closer.

Which of the rules rings true to you?