Titandeath brings the full fledged might of the Titanic conflicts of the Horus Heresy to the fore with rules to back up the colossal carnage wrought by the war for Beta-Garmon.

The Beta-Garmon system was the site of one of the largest battles in the Horus Heresy. Occupying the most stable and direct Warp routes to Terra, the Beta-Garmon cluster was a vital chokepoint. In order to prevent the Warmaster from reaching Terra, the forces of the Imperium arrayed legion upon legion in its defense–but Horus, knowing the importance of this world, brought the full might of his war host to the world.

And so the stage is set for Titandeath.

Titanic legions of untold numbers gather on the battlefield, and the fighting is some of the bloodiest and longest lasting throughout the heresy. Titans fight against Titans as the God-Machines of Loyalists and Traitors alike go to war. This conflict will be like no other before it, a world-ending battle that will determine the next phase of the war. 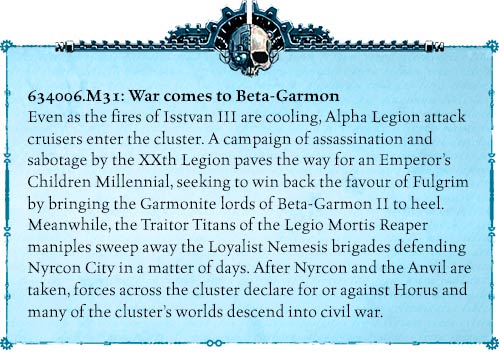 The expansion contains extensive background information on the worlds of Beta-Garmon and a complete timeline of the war to control them. Allied to this are a set of six narrative missions, each based on a key battle and providing rules for recreating it. These include suggested battlegroup sizes, Stratagems and series of mission special rules.

These missions range from small clashes for control of the shipyards on the moon of Theta-Garmon to full-scale engine war on a 6’ x 4’ table littered with the corpses of fallen Titans. Each provides you with a new way to play, and a very different experience – especially those games that use uneven forces. Pitting a larger battlegroup against a smaller band of beleaguered defenders makes for a tense clash.

So Adeptus Titanicus battles are getting a lot bigger–this sounds like a big step into some exciting new territory. Titanicus already plays fantastically on a smaller scale, but taking games to a 6×4 battlefield feels like the game can really stretch its legs and dig in and explore things like mobility vs. long range firepower–you’ll have a chance to feel the weight of the damage dealt as the battle drags on.

And each of the missions in Titandeath (or any you decide to play outside of it) has seven new sets of additional rules meant to simulate the worlds in the Beta-Garmon cluster. Caustic winds, airless voids, toxic storms, all providing interesting challenges for Legion commanders to deal with–will you risk danger and bait your enemy into one of these hazards? Or will you try and avoid them, possibly playing into enemy hands… 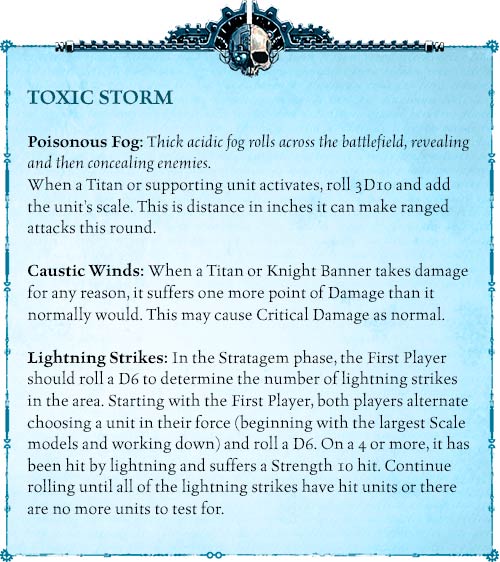 The other big thing that Titandeath adds is rules for Campaign play. Which continues a theme for GW’s releases this month. It does feel like the right move for Titanicus though–you’ll get rules for crew experience, honors your Legion might win, swanky loot, and rules for salvaging the battlefield after the fighting has come to a temporary halt: 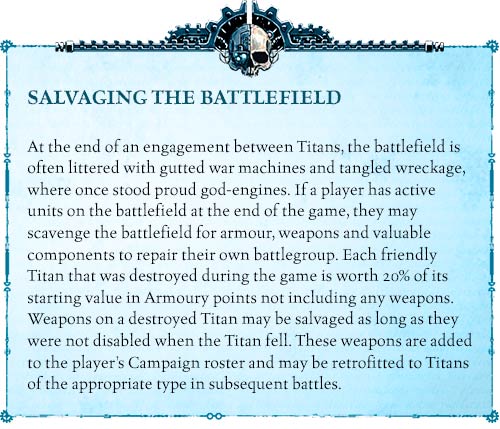 These rules add a sense of continuity and consequence to the battles–how will enemy and allied forces fare as damage is doled out to them–we’re excited to take an Adeptus Titanicus campaign out for a spin. There’s more coming this week, of course, as the days to Titandeath’s launch count down, so be sure and check back soon.