D&D: Monsters Of The Mad Mage

The Dungeons of Undermountain are home to many strange and wonderful monsters, and today we’re going to look at some of the best ones!

Waterdeep: Dungeon of the Mad Mage is a playground for creativity. It has some of the most extravagant dungeons you’ll find–each one of its 23 levels is home to a unique theme, a host of deadly traps, and of course it wouldn’t be D&D without monsters of all stripes to encounter. Some are friendly, some are antagonistic, and some are weird.

That’s what we’re celebrating today–the things that fire our creativity. So today we’re going to look at five of the monsters out of Waterdeep: Dungeon of the Mad Mage and see what makes them tick, and why the monster design in this book is just so good. A lot of it comes down to not being afraid to experiment. A lot of these monsters are designed with their lair, or their level, or even the specific room they’re in in mind. As a result, these monsters fit in with the rest of the dungeon, making every room feel distinct.

But though they are designed with an encounter in mind, they are by no means trapped to only the one written in the book. It just gives them a unique spin–which is something you might consider: when designing a new monster, think about a typical encounter, then think about a set piece battle–imagine what role they’d play in that, then design backwards from there, still filling out the usual monster design, but with an end goal in mind. Try and hang onto those thoughts as we dive once more into Undermountain. 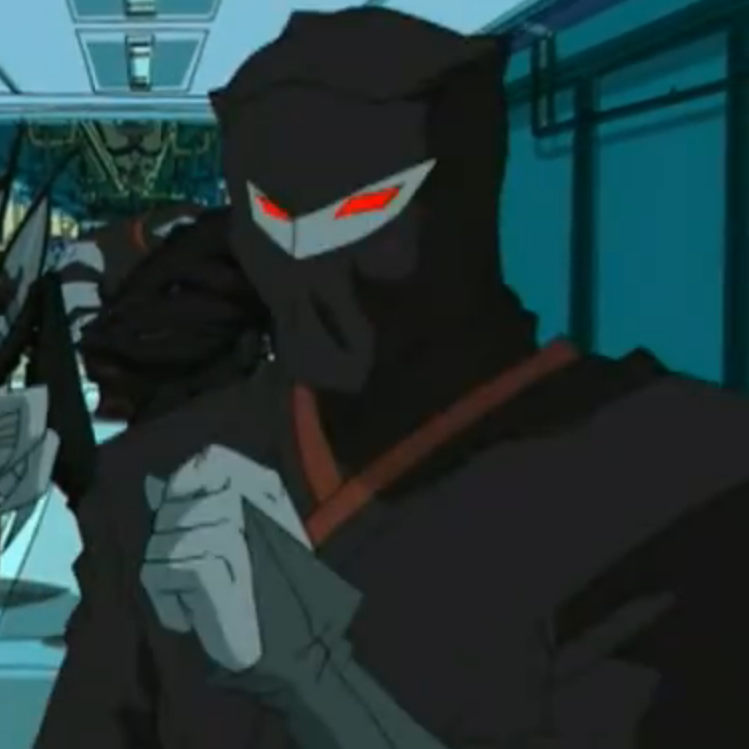 The Shadow Assassin is an unliving shadow that wields shortswords made entirely of shadow, that only exists to slay the living. It does exactly what you want it to–it’s an undead assassin that can get in pretty much anywhere, that can make a deadly attack, hang around for a few turns, then make its escape to continue harrying your opponent. It’s a great example of a creature that’s designed to fight the party more than once–each time its threat builds assuming you can have multiple shadow attacks before they get a rest, which should clue you in on how to try and run it. 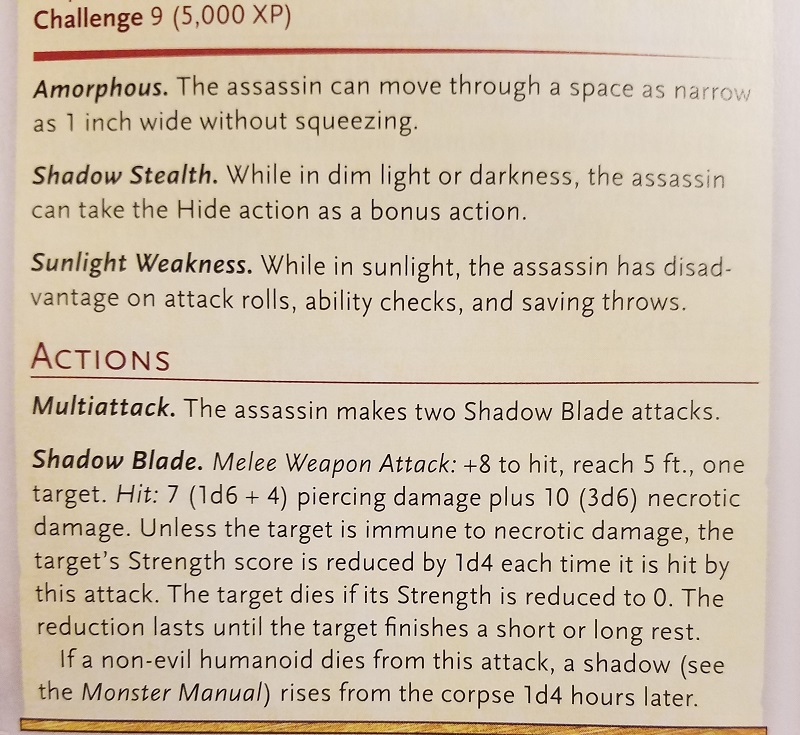 It’s an upgrade to the standard undead Shadow, coming it at CR 9, and with a move speed of 40ft, the ability to squeeze through a narrow opening of as narrow as an inch wide without squeezing, and the ability to hide in dim light or darkness as a bonus action, these stealthy assassins are designed with escape routes in mind. 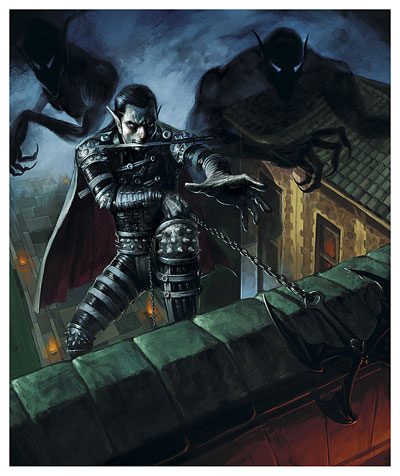 Combine this with their resistances–most elemental damage (save Force) and nonmagical weapon damage only deals half damage, and they cannot be paralyzed or grappled or otherwise trapped–and you can see they’re clearly designed to harry an opponent. Especially since every time a creature takes damage their Strength score drops by 1d4. The best way to run this assassin is to pick a target and then plan not one–but about three encounters, have the assassin pursue them through Undermountain, slowly lowering the Strength score until your players are desperate for an hour’s peace. With the Assassin continually pursuing and then retreating, it’ll up the tension each time. 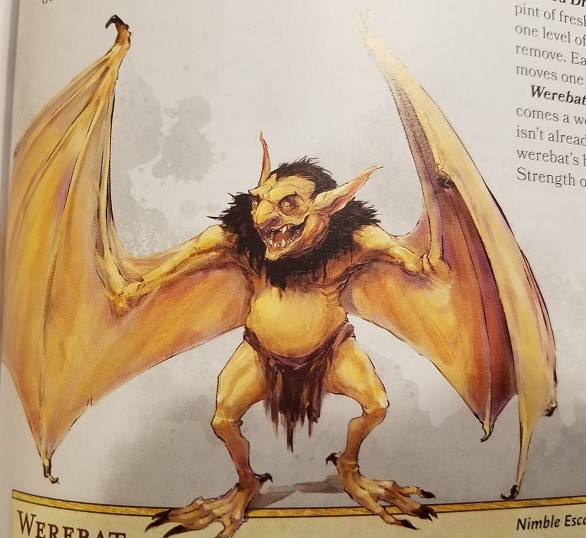 Probably one of my favorite monsters in the dungeon, the Werebat is a great example of how you can get crazy with building your own Lycanthrope designs. This is a goblin afflicted with a rare form of Lycanthropy that transforms it into a giant bat–they have to drink blood to survive and can transmit their curse which carries with it some interesting boons and penalties.

But as far as its abilities go, it looks like they took the abilities of the beast–a giant bat in this case–and combined it with a Goblin profile, gave it a heightened Dex (all werebats have a Dex of 17) and then tossed on a bite attack for good measure. Toss in a scimitar, a shortbow, and some blood drinking, and you’ve got yourself a great skirmisher. 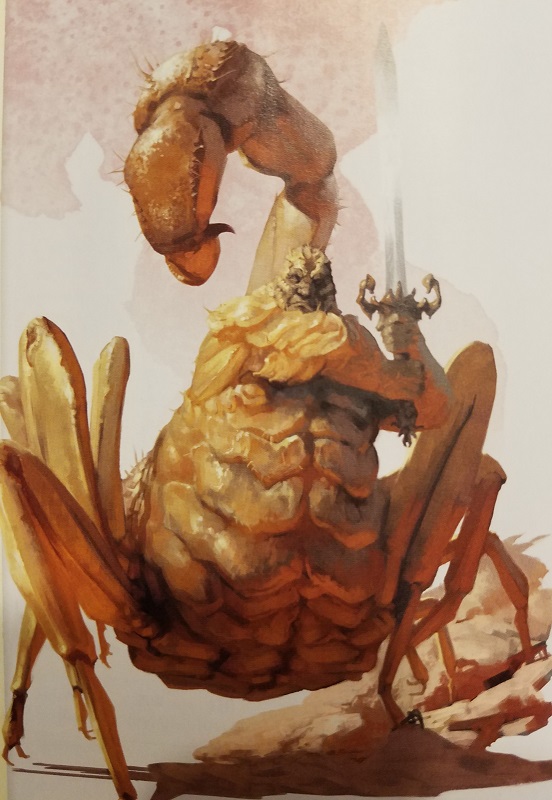 This is the monster I had in mind when I said many of these monsters are designed with a specific encounter behind them. Muiral is a potent level boss in Dungeon of the Mad Mage. At CR 18 with legendary abilities (and resistances) he’s no joke. Nor should he be, he’s Halaster Blackcloak’s loyal bodyguard who learned just enough magic to transform himself into a half-scorpion monstrosity and has been trying his best to be The Rock ever since. He hunts down adventurers on Halaster’s behalf, or just for a good Saturday night. 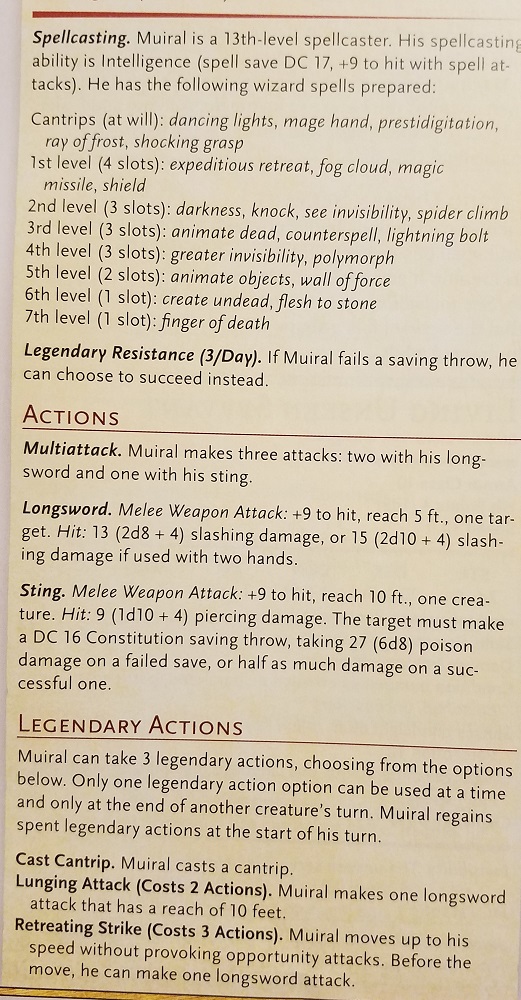 And as you can see, he’s got the tools to do it with–and apparently “just enough magic to transform into a human-scorpion monster” is 7th level spells, which makes him particularly deadly. He packs some pretty mean spells for hunting down opponents–things like Greater Invisibility and Polymorph can give him an edge in combat, while Wall of Force and Animate Objects can help keep multiple opponents from piling in on him.

I love the toolkit of this monster–he’s beefy, with almost 200 hit points, but he’s not hard to hit. He has a lot of powerful effects–but they feel good to survive against. None of them feel unfair, and they make for a difficult but satisfying fight. Muiral is great inspiration for those looking to design a boss fight. He’s got some subtlety but even if you just charge him in like a big sack of hit points, he’s got the tools he needs–especially where legendary actions are concerned–to give any party a good fight. And that’s what you want to go for when building a monster, Muiral’s magic and might back up the look of this Scorpion King. 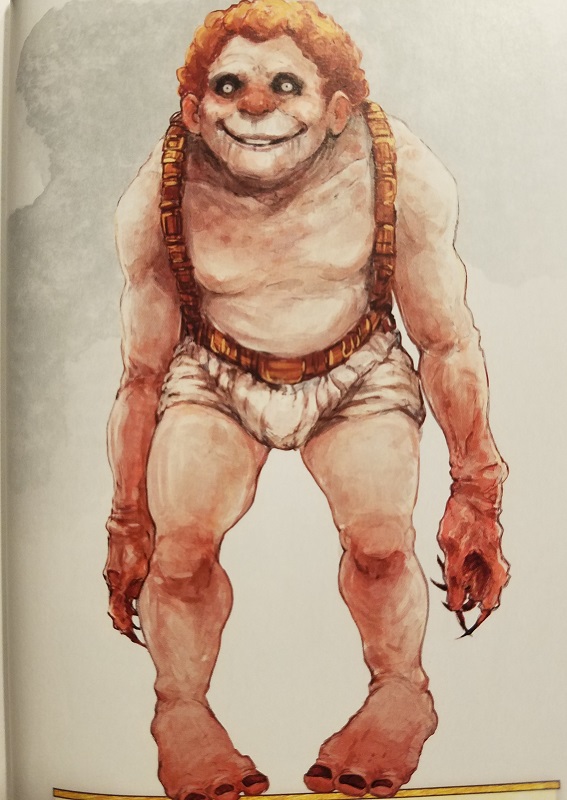 What I love about the Lava Child is not that they’re a threat on their own–these are CR 3 monsters that you’ll be encountering in a dungeon that goes from levels 6-20, but they’re very atmospheric, and when you encounter them near their native lava, it adds an extra layer of difficulty when dealing with these guys. Especially since they’re immune to metal and fire of all kinds.

Finally we have the Scaladar. These monsters are constructs designed by Halaster’s construct-crazed apprentice, Trobriand. Known as the Metal Mage, Trobriand specializes in construct creation, so naturally he created electric scorpion monsters–but he helpfully left control rings for the creatures scattered around. When the players encounter these creations, they might even be under the command of a friendly gnome–and it’s entirely possible that PCs might command such a creature.

Which is what I like about these monsters, they’re aspirational. Your players can see them in action, see what they do thanks to a friendly NPC, and then suddenly have a very achievable goal. Find a control ring, harness some Scaladar, and from there, profit. These can be used to build things, fight foes, pretty much everything except betray their true master, Trobriand, who has a master control ring that overrides any other commands the Scaladar might have.

So these creatures have two basic encounters built into their design. First there’s the initial acquisition, then, much later down the line, the Scaladar can turn on the PCs and their allies should Trobriand decide to take over their command.

And that’s what makes Dungeon of the Mad Mage so much fun–there’s a lot of creativity at work here, and you can find it in everything from the dungeon to the monsters. It gets you excited and thinking about how you’ll run your game, and when it comes to D&D books, what more could you want?