Gaslands: Why You Should Buckle-Up and Get Stuck In 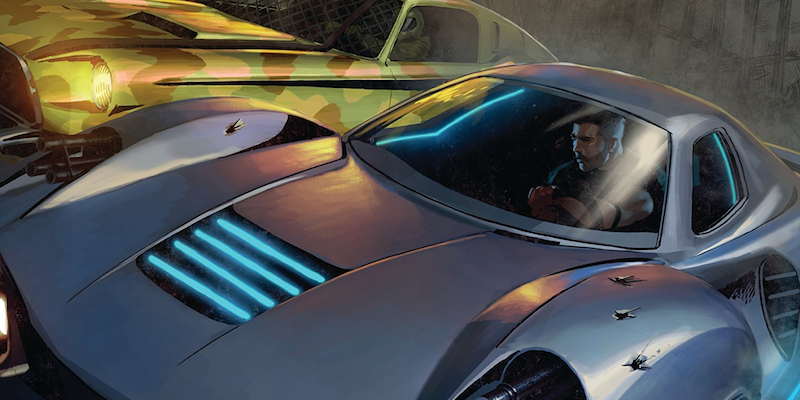 Osprey’s Gaslands, by now I think many of you will already have heard of it. I know I’m late to the party. However, there are certainly stragglers yet to discover the game, let alone be sold on it. So now, as much as ever, I believe it deserves a full-throated and only mildly qualified endorsement. I therefore present my review-ish thing dressed up as a Buzzfeed style “5 Things we love about X” article, wherein the X stands for Gaslands.

Back some months ago a friend said he’d come across a table-top game in which matchbox cars are dressed up Mad Max style for a variety of races, destruction derbies and other more ubiquitous scenarios like deathmatches and capture the flag. I’ll admit to some scepticism over the ruleset but would not pass up an opportunity to paint up some matchbox cars. So, I spent £6 on a pack of Hotwheels cars, picked out a pickup truck from the pack, glued the wheels in place, glued an Icarus Skyfire Array from an Imperial Knight onto the back, painted it up with some go-faster stripes, and hit the road out of London for a weekend of gaming.

As it turns out, my scepticism was ill-founded. That first game blew my expectations out of the water, then reassembled the wreckage, then blew them up again! After a few rounds I’d grasped the basics and could play mostly unassisted. From then, the game swerved violently between nail biting tension to moments of delightfully amusing carnage.

Since that game I’ve thought about Gaslands a lot. I’ve painted up another car, this time with a multi-melta masquerading as a comically oversized flamethrower, and I’ve spent 10 of my hard-earned pounds on a toy lorry to make into a war-rig (it would be better with an American style cab, rather than European flat front, but hey-ho we make do with what we’ve got). I’ve also played some more games, purchased the rule book, a set of dice and acrylic templates and spent more time than is justifiable trying to figure out how to make a Cadbury’s Crème Egg car into a weaponised halftrack. 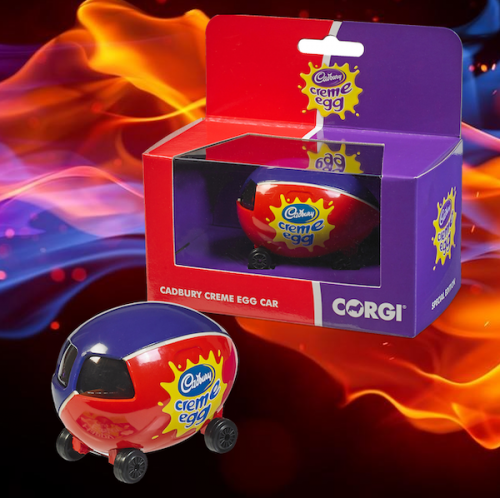 A chariot fit for the gods.

So, how did this game grab me, and so many others, so comprehensively by the throat? Here’s my list of 5 things that make Gaslands magic:

A lot has already been made of Gaslands’ affordability. I ordered dice and acrylic templates for my second game. They didn’t arrive in time, so I cut paper templates from the back of the rulebook and assigned the Gaslands skid dice values to regular D6s. It worked fine. Total cost: £10 for the rulebook, £6 for the cars. And even the cars you could readily steal matchbox cars from unwitting toddler relatives.

The game is also hugely accessible with a slim ruleset. To me it feels more intuitive than any other tabletop game I play. Many of the rules, once read, seem like a blindingly obvious way of doing things, which always signals that you’re onto a ruleset that is going to feel natural, easy to grasp and immersive. By my second game the rules seemed a doddle to understand and I spent very little time actually referring to the rulebook other than for weapons’ special rules and profiles.

Much has also been made of the amazing opportunities to set your creative-selves free when constructing your vehicles and adapting them for battle. From hulking war-rigs, to nippy dirt-bikes. From tanks to helicopters you are only limited by the types of vehicles that currently have a profile. What they look like, how you make them and where you glue on the bits – all this is up to you, and it’s incredibly liberating.

Beyond all the simplicity, it’s worth noting that the ruleset is also ambitious enough to feel like a full game with opportunity to experiment and explore. Not in Gaslands does streamlined mean fewer choices. Between the covers of the rulebook there lies a breadth of game-modes and vehicles as well as ways to change up your team with different sponsors and perks to ensure matches continue to feel fresh and give you a reason to endlessly discuss list building. And after all, isn’t endlessly discussing list-building half the reason wargamers do what they do? 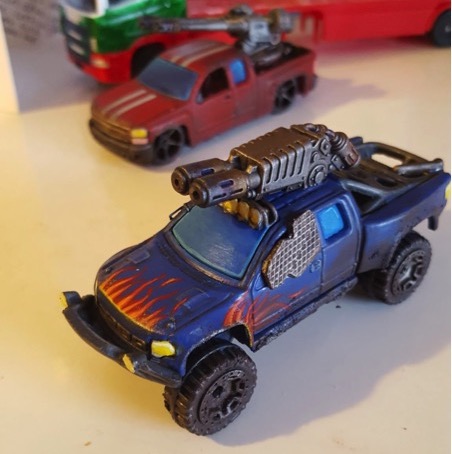 Superficially, Gaslands uses templates to move, templates and dice to fire weapons and has systems of cover and wounding; making it appear, save for a few novel quirks for things like skidding and sliding, like an X-Wing/Warhammer/other games mashup.

Fundamentally though, Gaslands’ gameplay is actually built on a system that demands you take calculated risks to remain in contention. A fundamental mechanic of the game is that vehicles perform actions which generate hazard tokens. Once a vehicle has six hazard tokens, it loses control and cannot participate any further in that turn. This is a big deal because turns are split into rounds, each of which provides an opportunity to activate your vehicles, save for the caveat below. Rounds proceed in ascending numerical order from one to six. So, if you spin out in round two, you’re potentially missing out on four activations!

To rachet up the tension further one of the most seemingly innocuous actions, changing gear, is absolutely vital to victory and also generates a hazard token. As the rounds ascend from one to six, you can only participate if your current gear matches or exceeds that round number. So, as you start the game in gear one, you’ll want to gear up at least to gear two straight away. Otherwise, in round two you’ll be out for the rest of that turn. This creates an amazing sense of urgency, like you’re constantly pushing your vehicle to higher and higher speeds to stay in the game.

This system is stressful in the best possible way. Sitting on 5 hazard tokens in round 3 feels like your really in the driving seat, smoke billowing from the engine, pedal very much pressed to the metal, teeth clenched, rocks and piles of twisted metal racing past as you hope your car holds together just long enough to finish. Back on the tabletop, with those 5 hazards you know that if you’re hit by another vehicle, go over rough terrain, are shot by an explosive weapon or have to perform a tight manoeuvre then you’re getting your 6th token. Then, at best you’re missing the turn and starting the next round facing the wrong direction in gear 1. At worst you’re spiralling headlong into another car, possibly yours, almost taking them both out the game… which really puts a sledgehammer to your plans, that I can tell you from experience!

To make things worse, vehicles in higher gears are less manoeuvrable. It’s all too easy blinding yourself with the ambition to hit top gear only to find yourself driving headlong into a scenery piece, another car or off the board before being able to change back down to make the turn.

In summary, as you pick up hazards throughout the game, you’re having to keep taking risks or fall irrecoverably behind. Taking that risk can pay off big time, or Gaslands can punish you for your hubris in the most spectacularly fiery fashion. 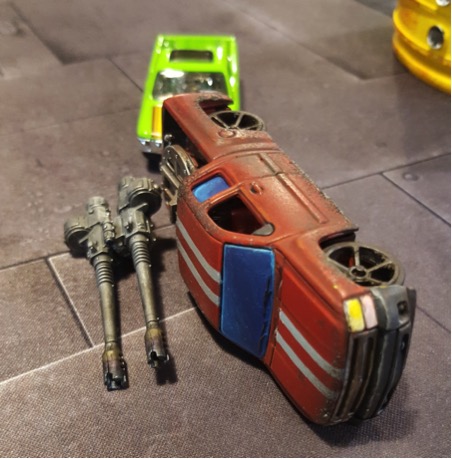 It’s a Physics Game – But Not as We Know It

Some of my favourite PC games are those in which the physics engine is the star of the show. Ever played Gang Beasts? Conceptually, it’s nothing more than amorphous dough-ballish humanoids fighting in an array of fragile locations. Each map is simply a playground for a physics engine that dishes out seemingly endless moments of slap-stick, physical comedy.

A tabletop game like 40k or Star Wars Legion is magic because we know the characters, units, factions, settings and stories. We enjoy Kharn standing firm against a tide of Orks, or Vader cutting down some rebel troopers because we can forge a narrative that lives in a universe we’re familiar with. Gaslands doesn’t have, and can’t ever have that. It will never have a range of stunning models or a world of characters for us to buy into. Instead, it does a great job of fashioning a physics engine for the tabletop that truly simulates vehicle movements, rickety engineering, collisions and explosions in a respectable manner.

It’s the Gang Beasts of the tabletop world. Except with cars…. and without the dough-ball people. Fine, it’s entirely different, but I stand by my analogy! 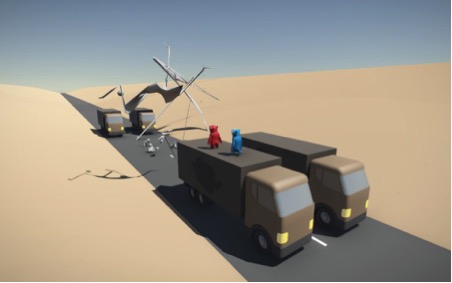 Gang Beasts, where the physics engine is… OH GOD, WHAT IS HAPPENING!?

Hit a vehicle from behind, that’s going to operate differently from a side-swipe or head on in a way that just makes sense without the writers needing to explain what the rules are trying to represent. I always find that games that manage to pull off this trick are all the more immersive for it, nothing breaks immersion like rules that disconnect the event on the tabletop from what we understand about the physical world. Ie:

“Why is it I can’t shoot that character?”
“Those troops behind that wall, which you can’t see and are in combat, are closer.”
“…. okay.”
“Just don’t think about it.”

Things can go wrong fast in Gaslands. In my first game, I was ahead with my pickup. A friend’s vehicle was just behind (typical tailgater (probably a middle-lane hogger too)). Behind that was my other car, attempting to block pursuers, then it was my friend’s other car and then another player’s car. (Got that? It’s my car one, friend’s car one, my car two, friend’s car two, other player’s car… I’m regretting this anecdote before it’s even begun).

The rear-most car fired his missiles off at the car just ahead of him, my friend’s car two. It exploded, careening into my blocker car which also exploded, taking out my friend’s forwardmost car which caused significant damage to my pickup in the lead. Half the models on the board dropped in an avalanche of burning metal and tires rolling out of explosions, Michael Bay style. It was the first death of the game… and the second, third and fourth. It opened the door to my lead car being popped the next round and the game was won by the car who had been trailing the entire race. He took to the podium as sole survivor.

The carnage in Gaslands has a real tactile feel to it. You can see it coming as the vehicles’ speed increases and hull points decrease. The tension rachets up and then when it all goes wrong the crashes can involve pile ups, explosions and game ending catastrophise in a way that is different every time, cannot be predicted and leaves no one ever really safe. This makes games feel like you’re playing on a knife edge which is great for getting the heart racing and gluing players to the table in a way that other games can struggle to sustain for the time required.

I’ve played Gaslands with two players and four players. No there’s no unpleasant quirks to the rules that don’t quite translate. There’s no faff, no fuss, just great gaming. I’d say it works better with more players for the party feel, but however you like to play it’s nice to see the game vault that hurdle so seamlessly. I’m not saying that’s unique to Gaslands, but it’s certainly nice to see.

~For those playing: what do you like most about the game?

Alex is a UK hobbyist. He started playing around 20 years ago and yet somehow still only wins events through his uncanny capacity for finding talented gamers to latch onto at doubles. His favorite armies are Craftworlds (he’s sorry), Harlequins (he’s less sorry), and Custodes (he’s back to being mega-sorry). 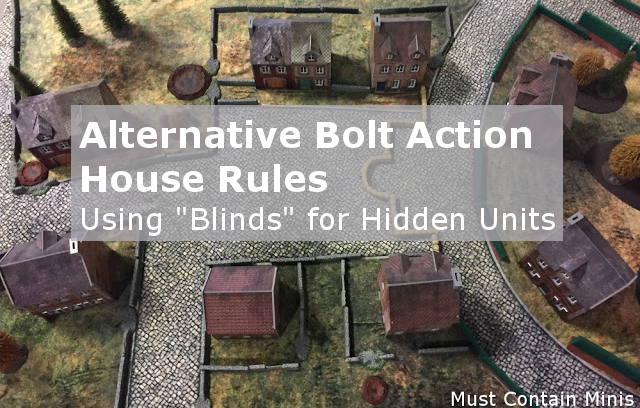