The Planet Killer is a massive Chaos starship that served as a flagship of Abaddon the Despoiler during the Gothic War and the 13th Black Crusade. The vessel owes its power to its main weapon, the Armageddon Gun, which can destroy an entire planet.

Sometime after the 10th Black Crusade, Abaddon discovered an ancient shipyard deep within the Eye of Terror. There, he discovered a half-constructed vessel. This was the original origin of Planet Killer.

Another perhaps contradictory account states that in 978.M40 Abaddon toppled Lord Teknos, ruler of the renegade forge world Baji IV. Teknos’ tech-priests followed Abaddon into the Eye of Terror, where they began construction of the Planet Killer, using data recovered on the halo world of Lanamorgstein.

The construction of the Planet Killer was finished in 139.M41, shortly before the launch of the Gothic War. In a ritual, sorcerer Zaraphiston bound several daemons to the vessel in order to decrease the needed manpower on board.

The Planet Killer played a crucial role during the Gothic War. Once the vessel was fully operational and manned, it followed Abaddon and his forces into the Gothic Sector where it acted as the Despoiler’s flagship.

With the Planet Killer at his disposal, Malefica Arkham decided to create his own empire. At first he was successful and conquered Gonnacrash and Quinrox Sound, but as he moved the ship to Kharlos II he faced the four Lunar class cruisers of battle group Omega. Without any other vessels to support him, the Planet Killer was reportedly taken out by continuous torpedoing.

There have been many rumoured sightings of the Planet Killer throughout the 13th Black Crusade. Whether it is the original salvaged ship or a new ship is unknown. 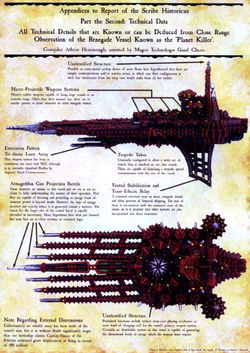 Built around a central energy cannon of immeasurable magnitude, the Planet Killer is also studded with numerous long range lances, weapons batteries and torpedo launchers. Well armoured and protected by a plethora of shield generators, the ship’s only weakness seemed to be its ponderous speed. It was this lack of pace which was to lead to its eventual downfall, as it was destroyed by salvo after salvo of torpedoes, fired at extreme range by the Lunar class cruisers of battle group Omega, shortly after the destruction of Kharlos II.

The origins of the Planet Killer are a mystery to Naval authorities. It bears no resemblance to any Imperial ship design and is assumed to have been constructed within the Eye of Terror by Abaddon’s forces, just prior to the Gothic War – in fact several of the Adeptus Mechanicus doubt whether its construction would have been physically possible outside of warp space.

Learn More of the Chaos Fleet

~ Astropaths report a possible vision of the Planetkiller in the aftermath of the Vigilus invasion.

Author: Larry Vela
Dad, Gamer, Publisher, Pilot, Texan. All games all the time since junior-high. I started BoLS Interactive in 2006. I’m a lifelong tabletop & RPG gaming enthusiast, and internet publisher working to entertain and inform my readers every day. I've been playing RPGs and Tabletop Games since the 1970s. I'm been playing and covering Warhammer and Warhammer 40K for over 35 years.
Advertisement
Battlefleet Gothic Lexicanum Lore Warhammer 40k
Advertisement

Tabletop Gallery: A Weapon For A More Civilized Age