PAX East is happening, and one of the big features premiering at this is the pre-order announcement for the new WotC-backed Acquisitions Incorporated Dungeon Manual, coming later this year. With eight new “positions” and other player options, there’s something for everyone to dig into. Franchise options are open now, inquire within.

Earlier this year came the news that Penny Arcade’s Acquisitions Incorporated would be publishing its own D&D book. In fact it’s going to be the first official 3rd-party book for D&D, which means WotC is putting their official stamp on it, Forgotten Realms and all. D&D, as it stands, is already littered with references to this lucrative dungeoneering experience deliverer. And with franchise options open for new adventurers all the time, here’s your chance to join the Acquisitions Incorporated family. There’s never been a better time (because it hasn’t actually been possible before now). Announced at PAX East, the book is up for pre-order–with a June 18th release date–and we’ve got some previews of everything, let’s dive in. 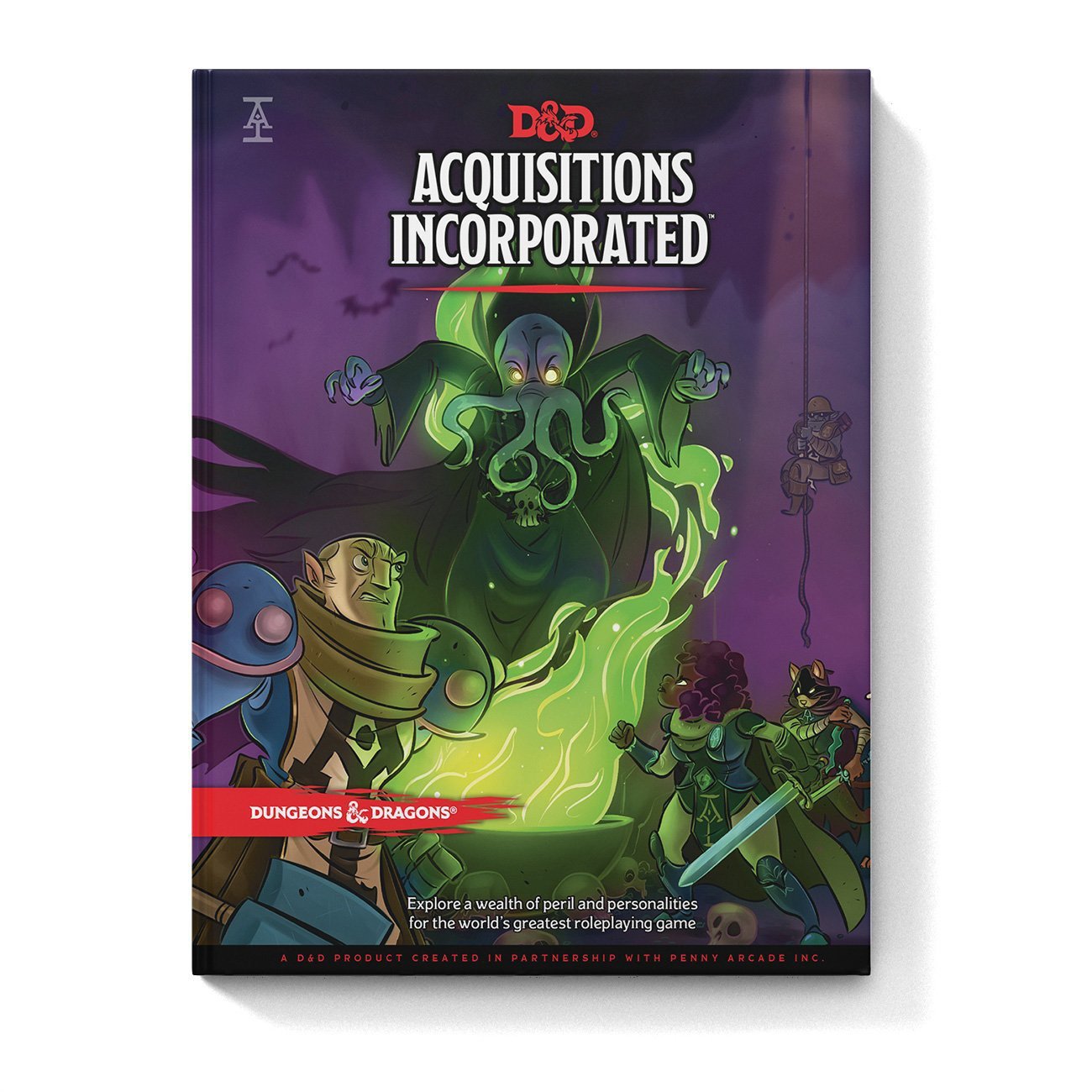 And that’s just the tip of the iceberg. Here’s more from the PAX East stream:

For starters, there are eight new player options you can choose from, reflecting different positions in the Franchise. Each of them comes with their own special party role power, as well as their own unique magic item. 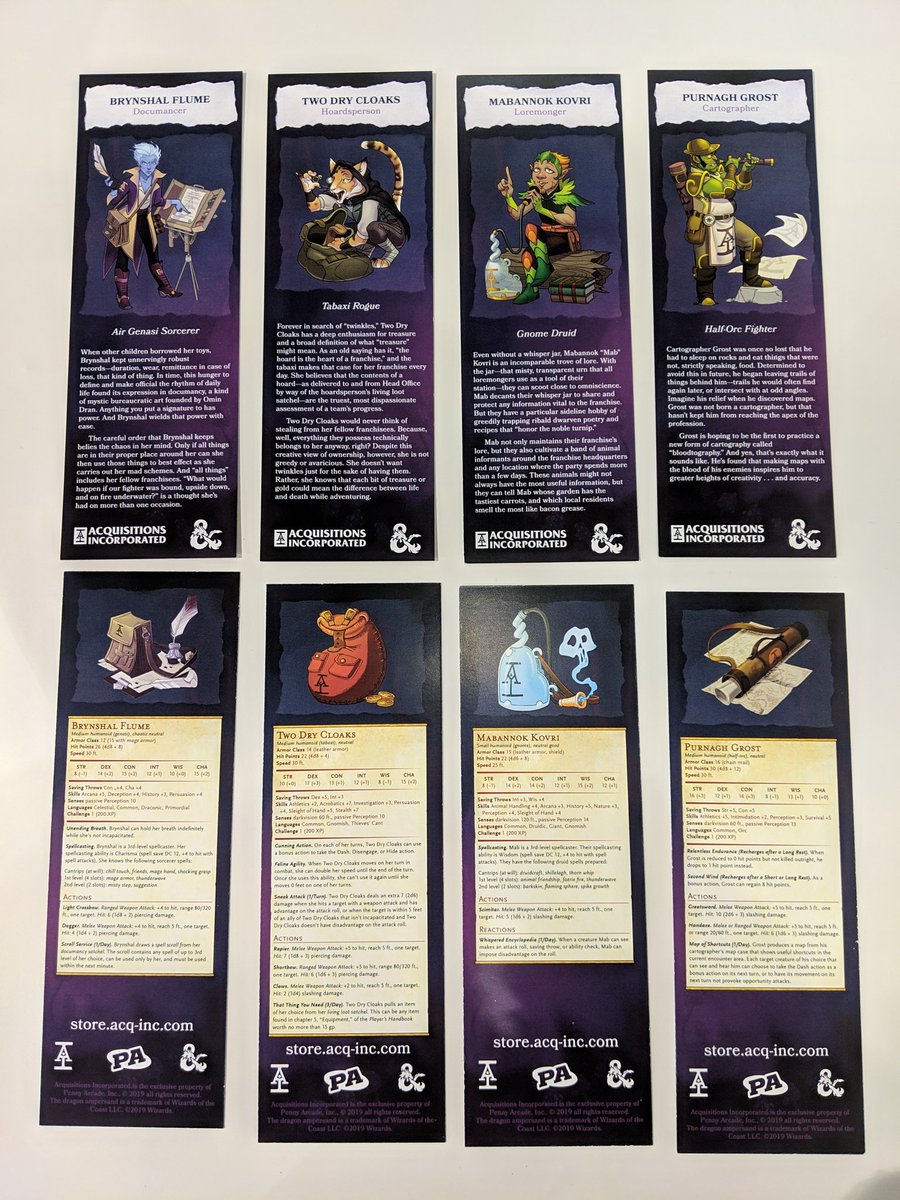 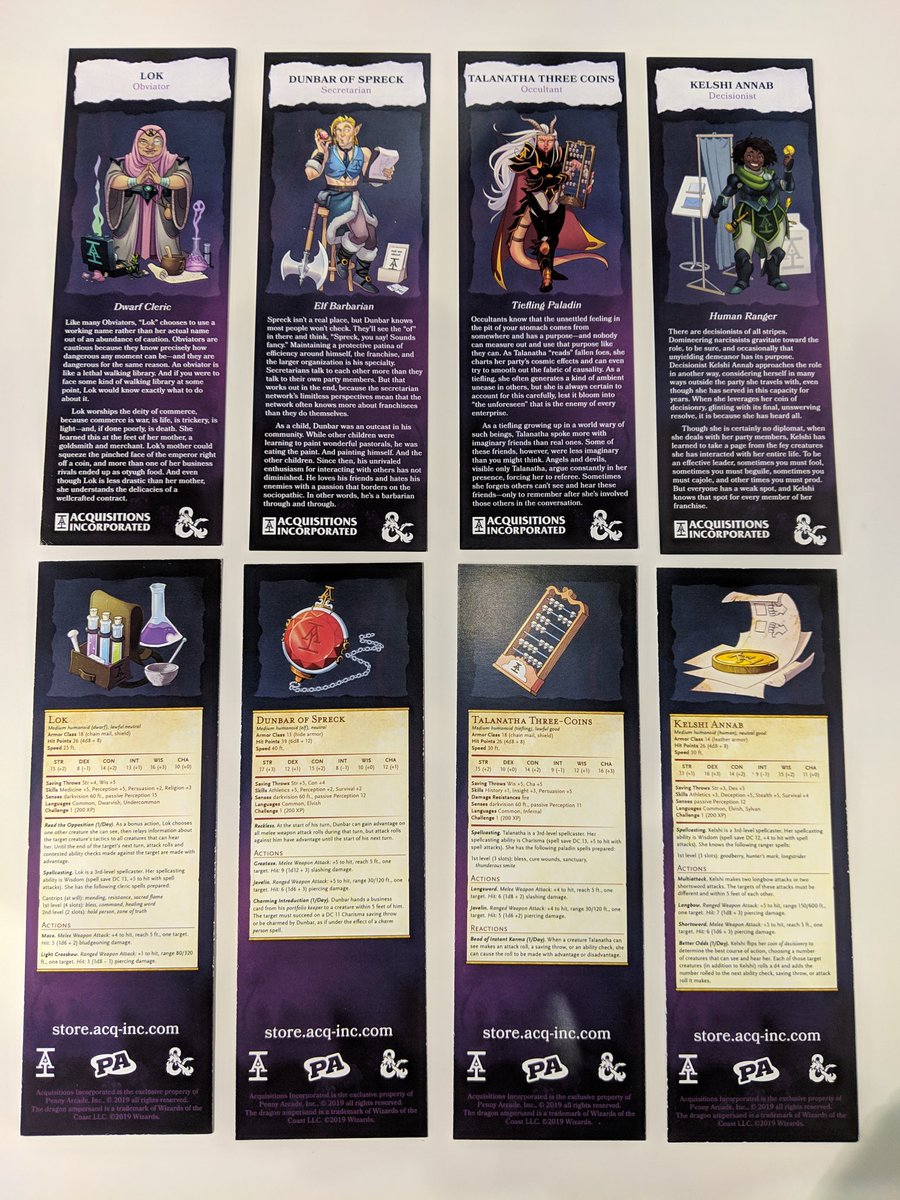 Here’s some more detail on these, coming to us from Twitter user @stormbreakerer

As we said, there are eight new roles all in all. 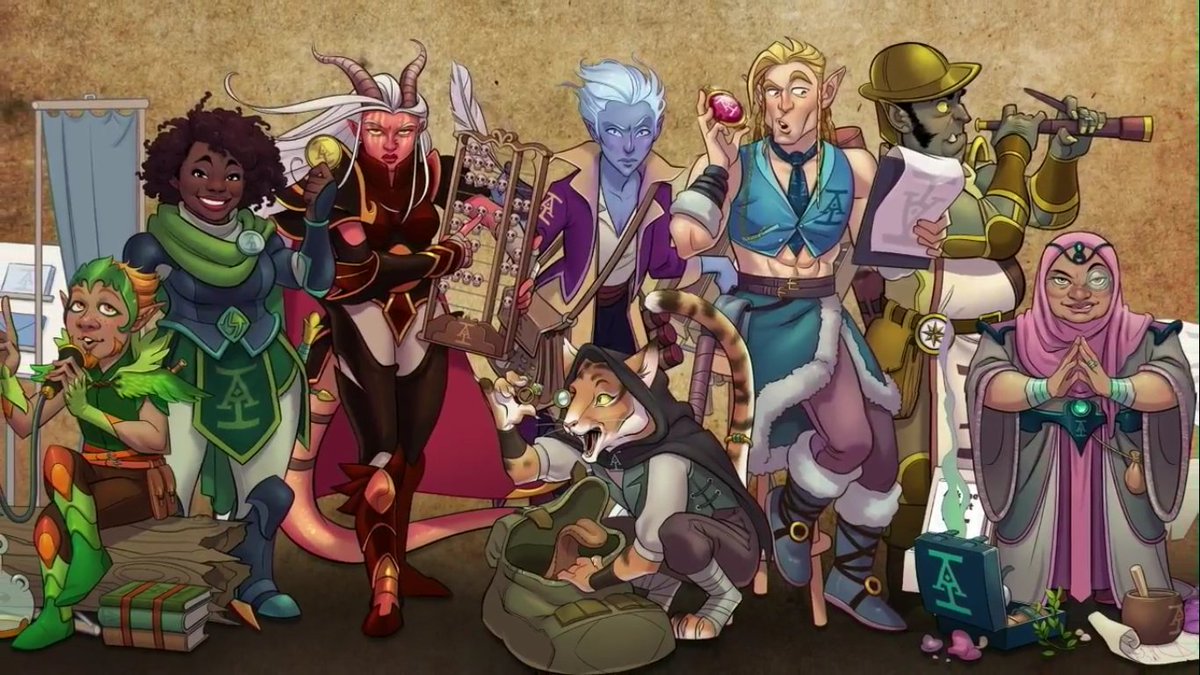 From left to right they are the Loremonger, Decisionist, Occultant, Documancer, Hoardsperson, Secretarian, Cartographer, and Obviator. Each has their own special function in a party as you can see above–but they all also have their own ranks, from 1-4, which allows you to gain access to more benefits from your role. 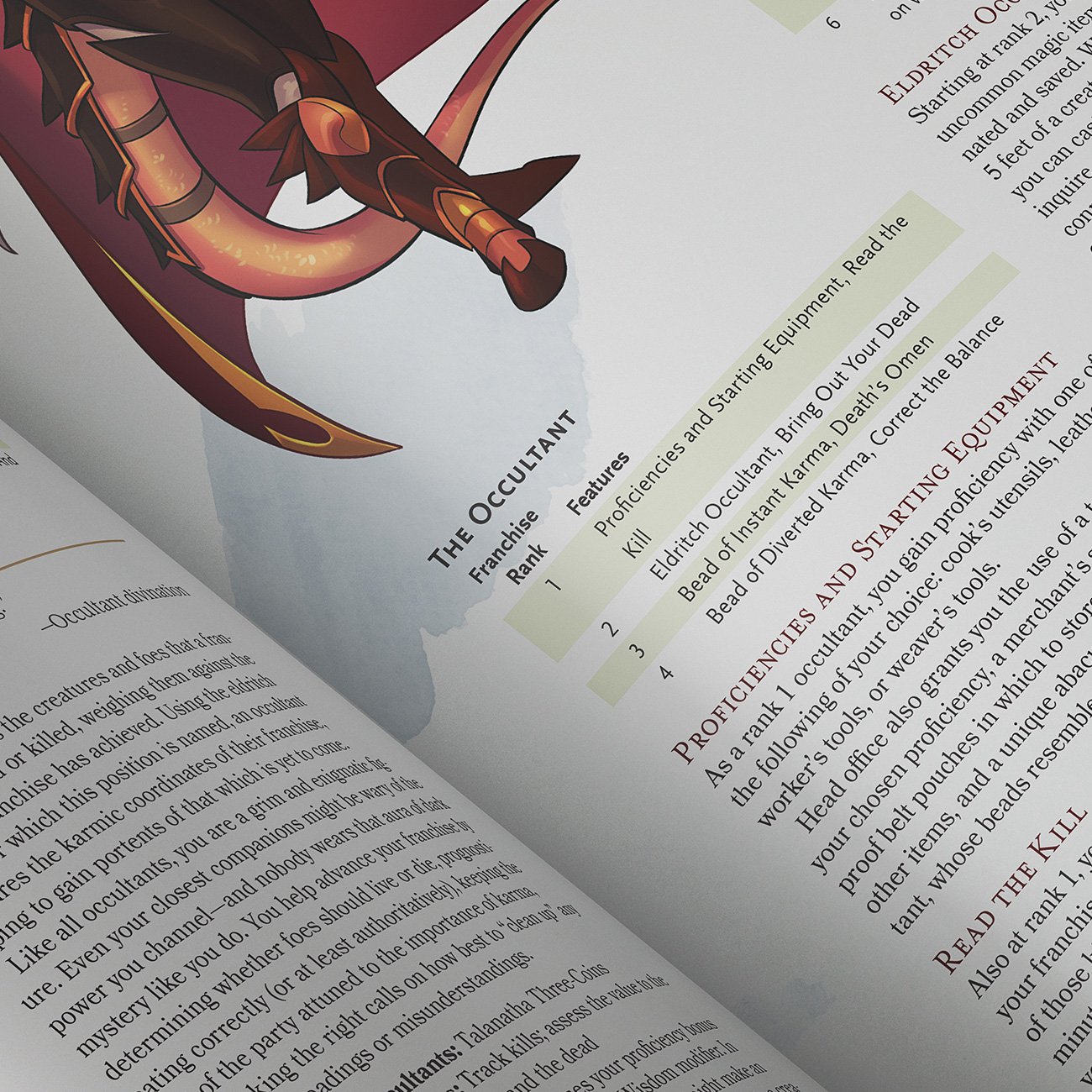 You’ll also find a brand new playable race, the Verdan. These are described as a species “without a culture but very interested in learning,” and aside from that, little enough is known about them. 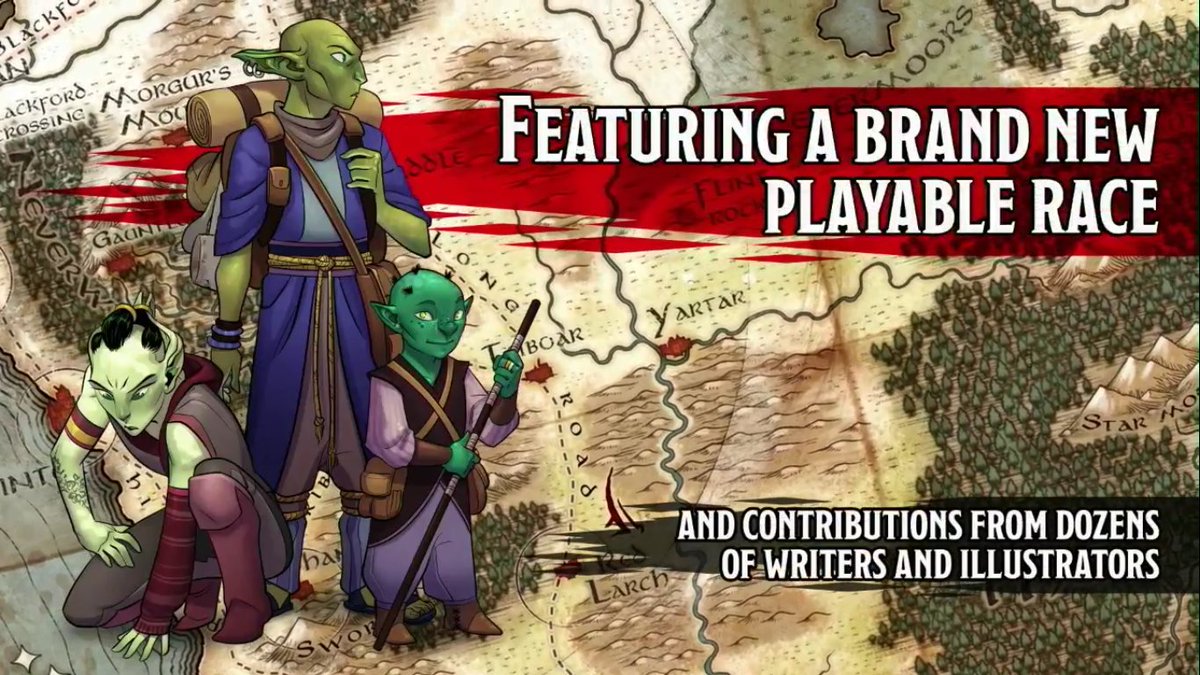 So you’ll have to wait for the book’s release to learn more about these aggressively adaptive creatures who originate when an army of goblins and hobgoblins were consumed by an eldritch power.

If you’re on the other side of the screen, there’s still plenty for you. Including a Level 1-6 adventure, as well as a whole swath of new lore to delve into about the venerable franchise. You’ll also find some new spells, monsters, and NPC stat blocks as well.

So if you’re looking for something new, with a little bit of a different flavor, keep your eyes peeled for the Acquisitions Incorporated Dungeon Manual. 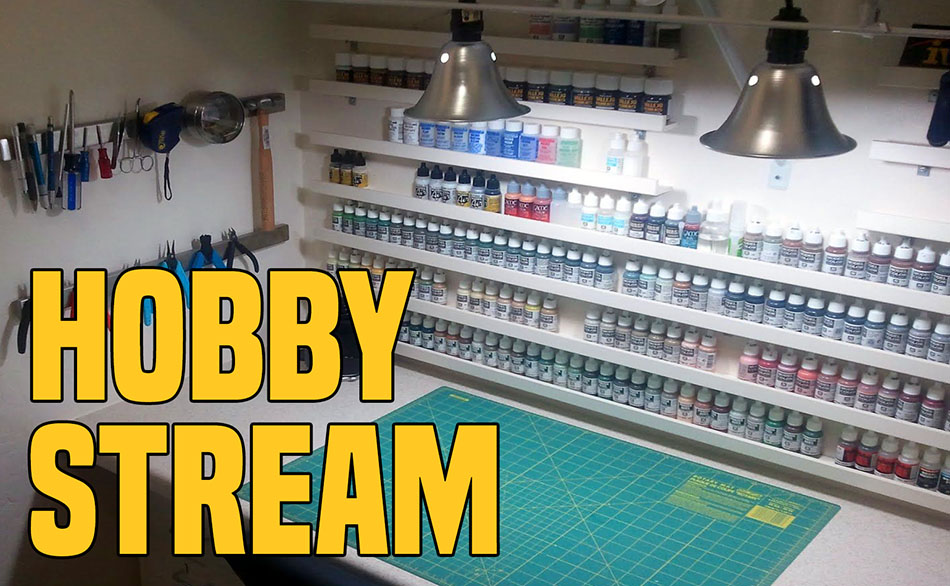