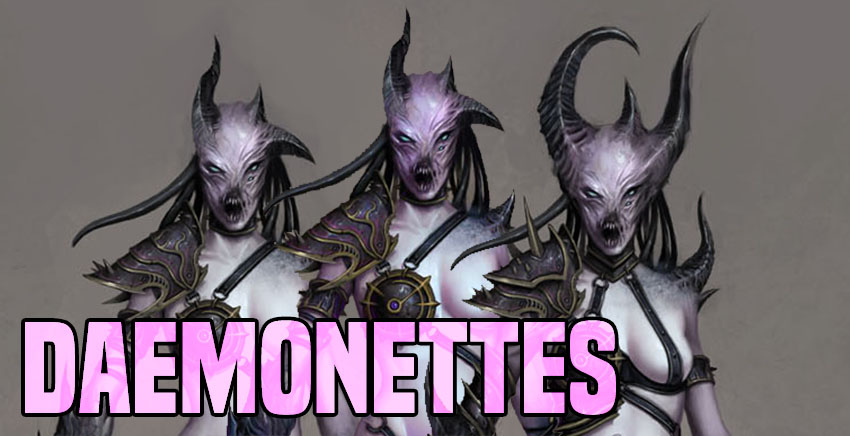 We are starting with today’s Daemonettes and rolling the clock back with each earlier version.

Daemonettes are Lesser Daemons of Slaanesh. They are the most numerous of his daemonic minions and serve him as handmaidens, warriors and agents.

Daemonettes appear as both beautiful and repulsive to those who look upon them. Their bewitching opal eyes and enchanting aura veil their androgynous features and grotesque claws, revealing an alluring appearance the beholder will always consider the epitome of beauty.

Depending on the situation Daemonettes can be gracious and swift warriors, using their razor-sharp claws when violent force is necessary, or subtle messengers and seducers who will haunt the dreams and nightmares of their victims.

Those Daemonettes that excel in their servitude may serve the Lord of Pleasure personally as courtesans on his throne. The more privileged a Daemonette is, the closer she is allowed to approach the throne.

The most seductive and parying Herald of Slaanesh has been gifted with a brand new models this year. An all new updated version of the Masque is here to dance the night away.

With Slaanesh about to jailbreak out of town in the Age of Sigmar, his loyal followers are having a good time in the Grimdark. 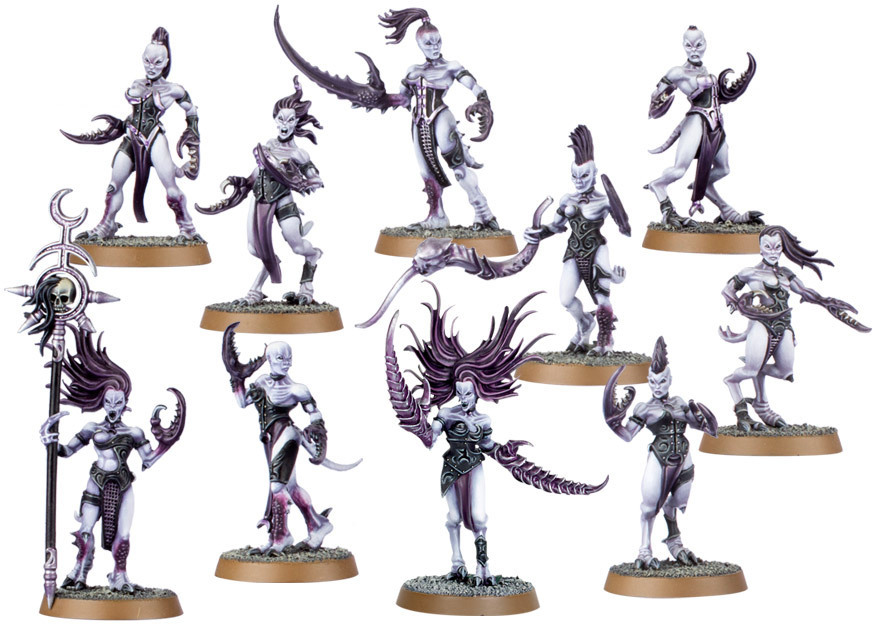 The current models. Out with the nudity, in with the corsets and the otherworldly hairdos (it’s the warp after all). Note the crabclaws – they change each edition. These are very much a PG-13 version of the previous daemonettes. 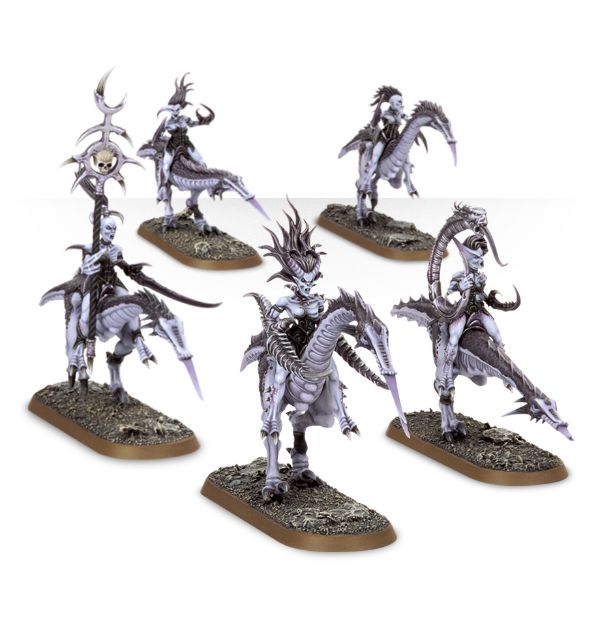 These ladies don’t feel like walking, the Seekers ride hard and fast across the galaxy – running their prey to ground.

Turning back the clock to 3rd Edition takes us to the most overtly sexual of the Daemonettes.  The last of the metal daemonettes was sculpted by Juan Diaz and they had a very different vibe than the minis that came before. Deadly stabbing claws and breasts (2-6) out front – these are still collected to this day. 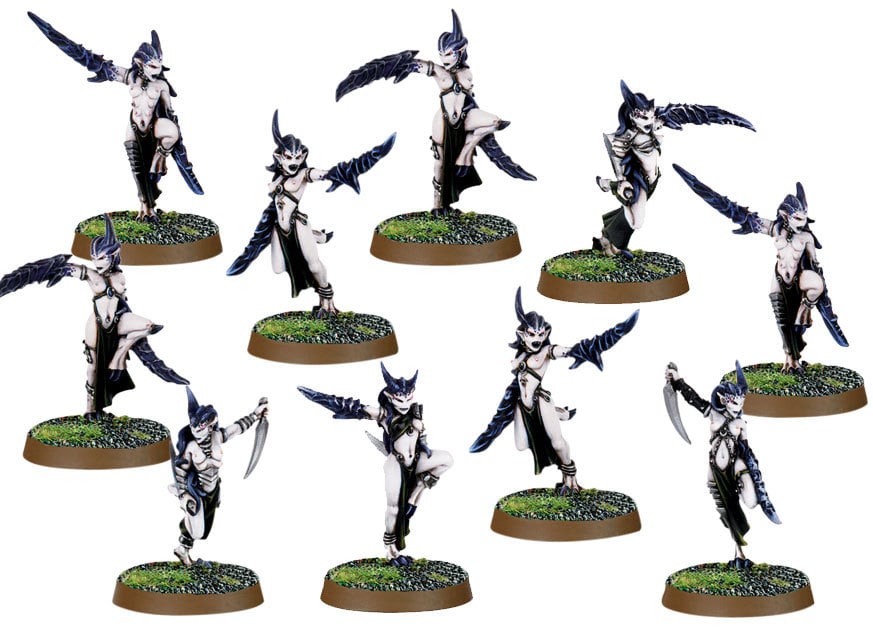 Out with the Crab Claws, in with the straps, stabbing hands and long knives. These ladies wanted your attention and weren’t shy about reaching out to get it. 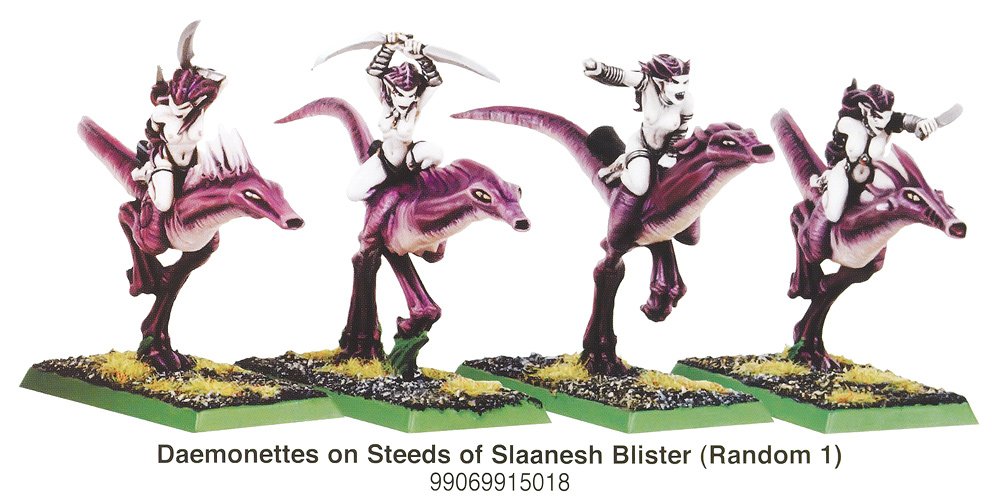 We’re headed back to 2nd Edition, and 1999.  These metal minis are the second incarnation of everyone’s favorite crab-ladies. 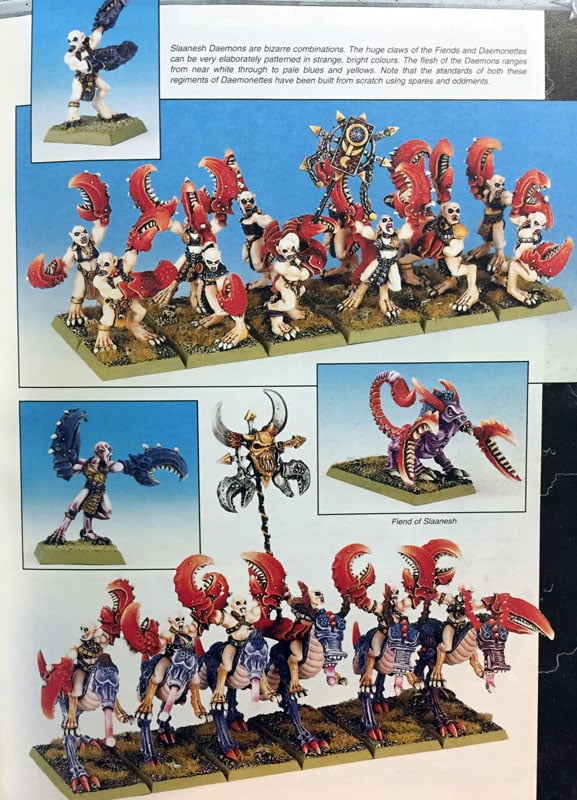 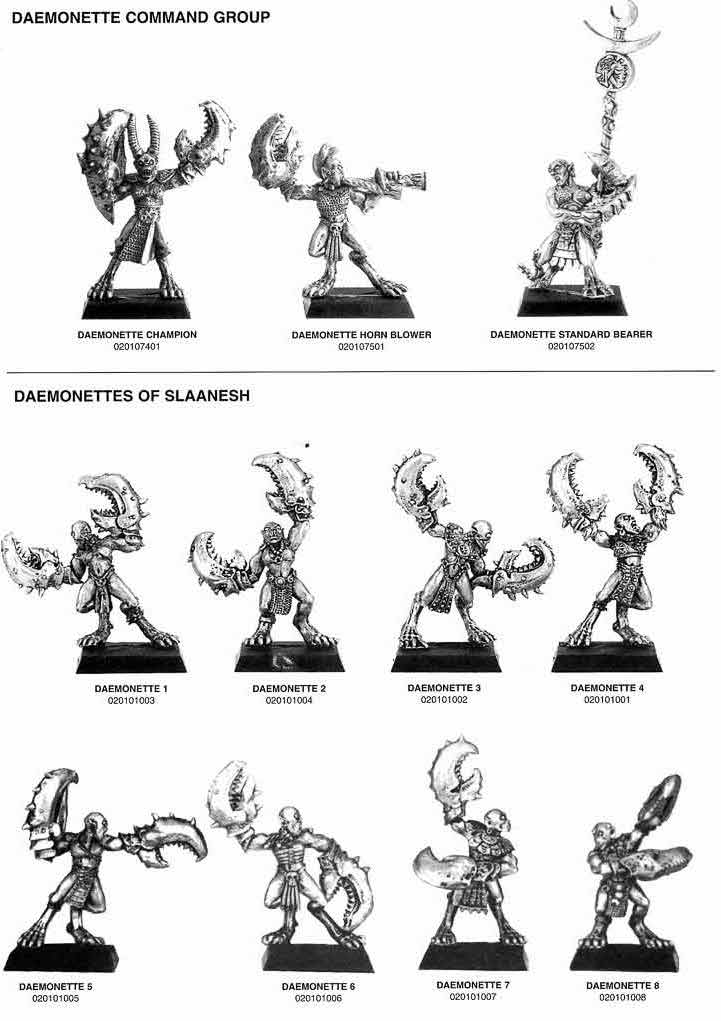 These are the most “horrific – daemonic” of the editions of Daemonettes. They have the largest crab-claws of the them all, an the same creepy bald inhuman heads. Giant eyes, fangs, and little to no nudity sum these ladies up. 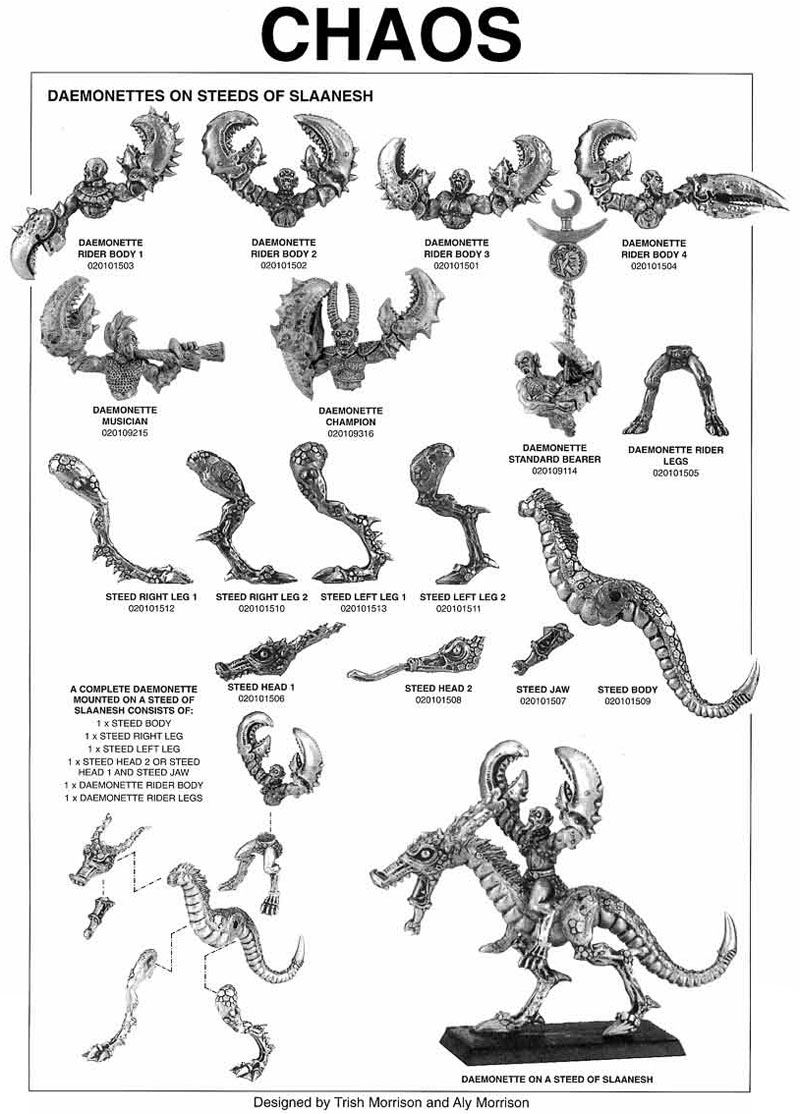 Here we see the 2nd Edition daemonettes on a steed of Slaanesh (that kind of looks like a dragon). These have the largest crab claws of them all.

Welcome to the 80s! Here we see the original metal minis for the Daemonettes that accompanied the Realms of Chaos books. 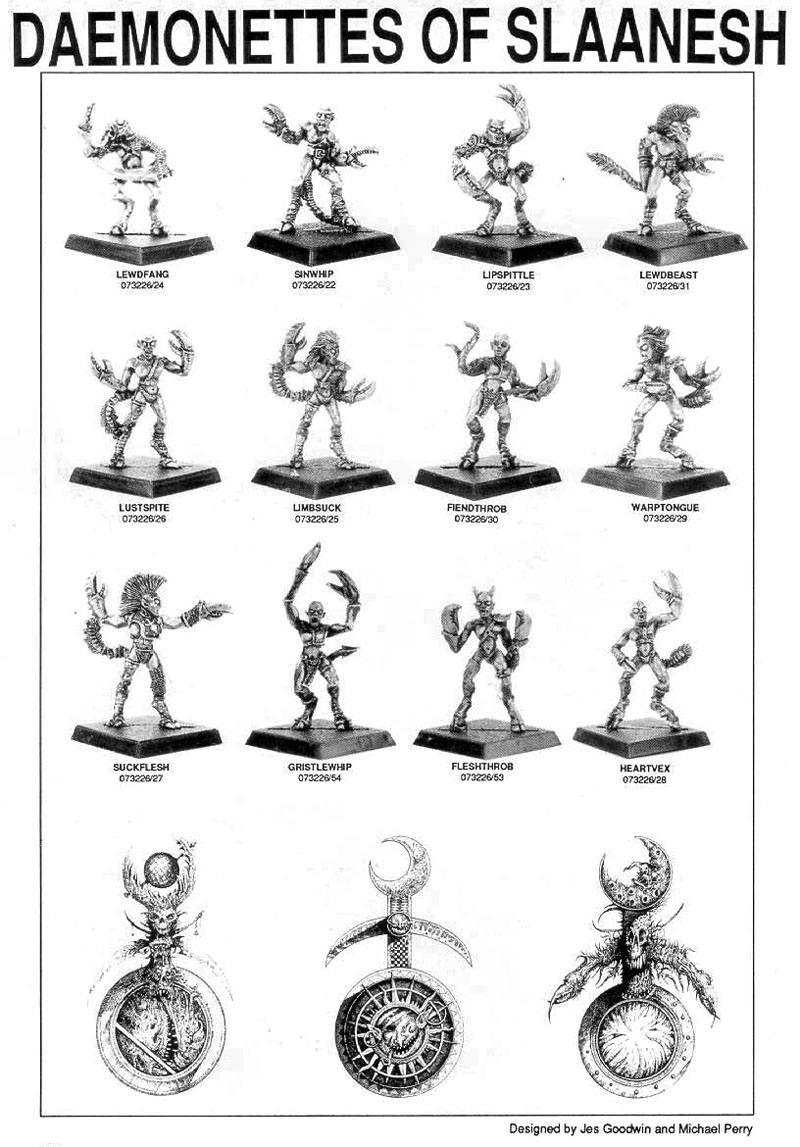 I bet you didn’t know GW named them! These are very slight of build, with quite small crab claws, but set up the original design of the bald head with oversized eyes and horns, plus cloven hooves. 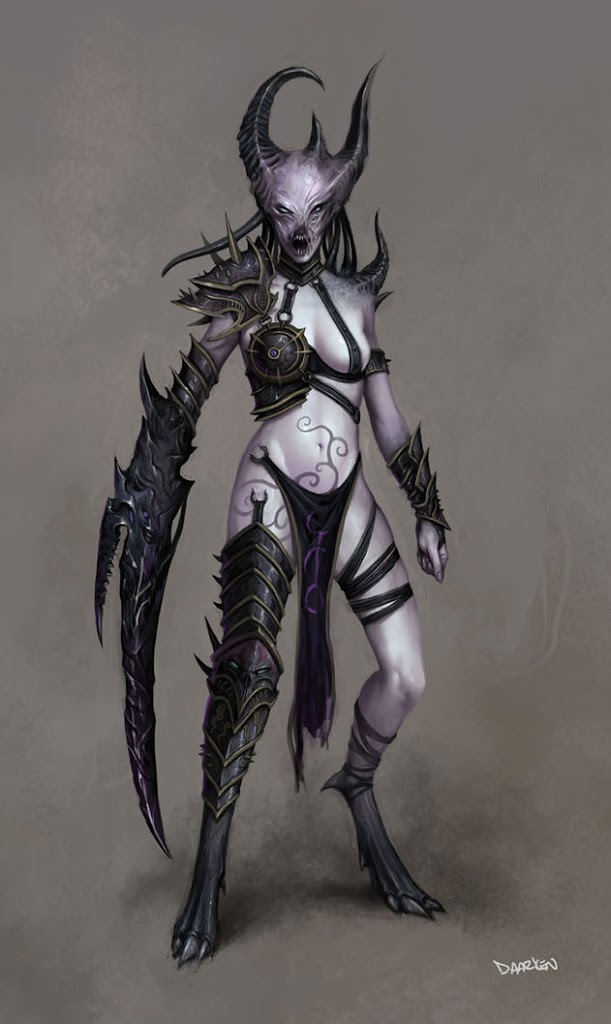