Battleground Fantasy Warfare is Back – Kickstarter is Live Now

The classic fantasy battle game is making a comeback – check out the latest army you can carry in your pocket! Battleground Fantasy Warfare is a miniatures game without the minis – it uses cards to represent units. You build an army the same way you would with other tabletop wargames: each unit has a point cost and each player has a point limit to build a list within. It’s a great compact option if you’re craving a complex, rank and file fantasy game.

Adam and J.R. give us a look inside the Men of Hawkshold box set included in the Kickstarter – and some of the other factions available now.

Along with a look at the game, we got a chance to talk to one of the owners of Your Move Games, Corey Somavia, about the history of Battleground Fantasy Warfare (BFW).

Note: this interview has been edited for brevity and clarity.

Could you tell us a little bit about your history in gaming, and how you found BFW?

In the late 1990s, I was introduced to miniatures games with Warhammer 40K. However, I could never get into Warhammer Fantasy Battles. I wanted a game where ranked units of warriors maneuvered for tactical advantage, but in Warhammer the characters so dominated the game that most units were little more than moving terrain or character escorts. And one day, a fellow gamer introduced me to this fantasy battle game where the miniatures were represented by cards: Battleground Fantasy Warfare. “But…there’s no minis!” I sputtered. But after a few demo games and chatting with a guy named Chad Ellis at a convention, I bought my first Battleground faction – the army I always wanted to play in Warhammer, Dwarves. 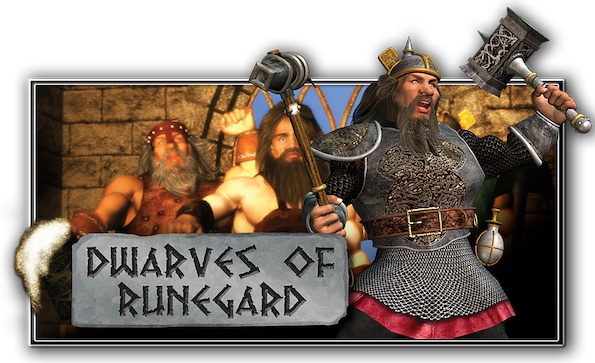 Your Move Games has been around a while – what’s its history, how did you get involved?

Your Move Games was founded by Chad Ellis and Robert Doughtery. Along with Darwin Kastle, they designed Battleground Fantasy Warfare, which won the 2005 Vanguard Unique Games Award at Origins. In 2016, Marcus Giegerich and I took over the reins of Your Move Games. Marcus was a Battleground playtester and community designer like me, but also he had a background as an entrepreneur. His business background was invaluable and together we set our sights on our first product release: reprinting the Men of Hawkshold.

Obviously, we aren’t the original creators of Battleground, but Marcus and I have been heavily involved in the design process for the better part of a decade now. When we had the opportunity to take over Your Move Games, we did so because we saw real potential in Battleground.

Tell us about the development process for Men of Hawkshold.

The phrase we use a lot is Tell the Story. When designing a new faction, we look at not just the unit and their stats, but also the special rules, faction abilities, and unique Command Cards. Every bit of that needs to Tell the Story of the faction because we want an immersive experience. And so the first step when designing (or re-designing) a faction is to decide what is their story. We kept this story in mind when we were considering how Knights, Longbowmen, and Great Swordsmen fit in with units like Spearmen and Lancers. Some units, such as the Pikemen, we altered to better match that story. 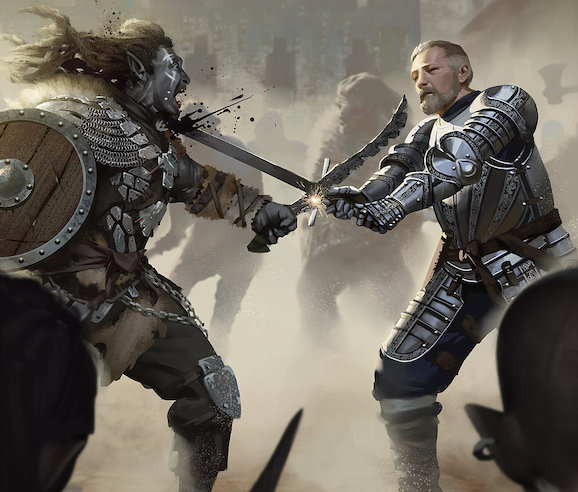 In addition to unit types, we also use the stats and special rules to tell the story. For example, with Hawkshold they are a disciplined, well-trained army. But this training emphasizes formation. And so their offensive and defensive stats are only average, but their infantry units have one more Green hitbox than most. This represents their ability to hang together in a fight longer.

We present the same themes with special rules. The Hawkshold army ability, Bravery, keeps them from running when the fighting gets tough. Their Command Cards are all about tactical flexibility. For example, Oblique Assault is a card that bolsters their ability to hit or to wound an enemy, and you get that choice when you play the card. 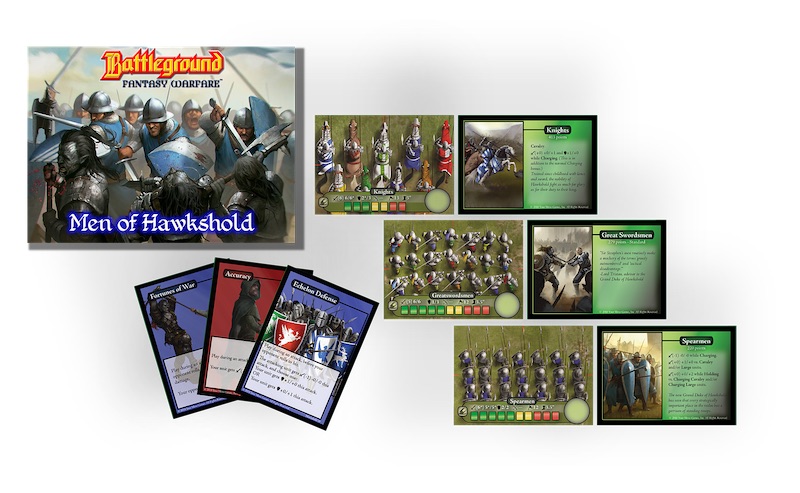 What lets us feel comfortable juggling all these variables is that we have a very robust formula that is the basis for all units and their stats. Designed by Chad and Robert many years ago, this formula is remarkably robust and has held up after years of play. This lets us tinker with adding a hitbox here or removing an attack die there and getting an accurate cost. Of course, we know that the vast majority of this backstory isn’t going to be immediately obvious to players. But our opinion is that even if people don’t vocalize that Hawkshold is a proto-modern state evolving from a late-medieval society, they’ll feel it. And this will make what is already a tactically rich game into a more immersive experience.

What is up next for BFW after this Kickstarter?

Eventually, we want to reprint all the Battleground factions with the new art direction we have for Men of Hawkshold. However, we will intersperse that with new factions. The Lords of Vlachold will be our next release. Vlachold was one of the lost Holds of Men, though overrun and lost during the first Orc Invasion. To survive the Lords of Vlachold made dark pacts that gave them immortality and inhuman abilities when they feed on the blood of enemies and vassals. The Lords of Vlachold is a medieval gothic faction where vampire units can feed on their thralls to heal their damage of their augmented their abilities. It also features other units drawn from gothic horrors, such as werewolf packs and ghostly warriors.

Follow that we will reprint Orcs, Undead, and Dwarves of Runeguard all at once. We’ve already started development on updating these factions and hope to post some trial rules on our development blog following the Kickstarter.