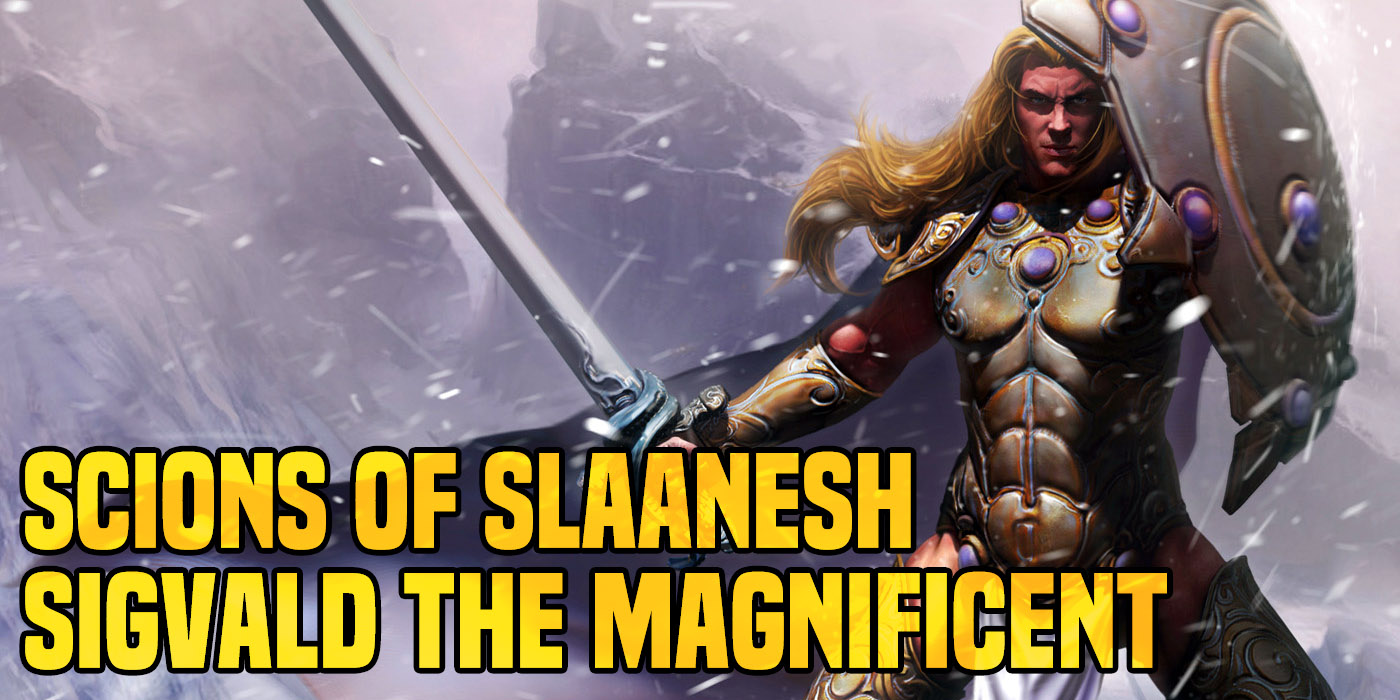 Come Loremaster and learn of one of the dread champions of Slaanesh – Decadence personified, eternally young – Sigvald, the Geld-Prince.

Sigvald the Magnificent, known also as Prince Sigvald, the Geld-Prince and also the Prince of the Decadent Host, is amongst the most infamous of Slaanesh‘s favored servants within the Old World, made legend by his prowess on the battlefield and his disturbing yet angelic beauty. Though he appears to be little more than sixteen summers of age, Sigvald the Magnificent has blighted the world for over three hundred years.

The personification of beauty on the outside, but rot within, the Geld-Prince rides at the head of an army of utterly devoted followers who would give their lives for him without a second thought. His elite bodyguard bear mirrored shields so that Sigvald might bask in his own divine glory, and dozens of exotic females attend to his every whim and desire. 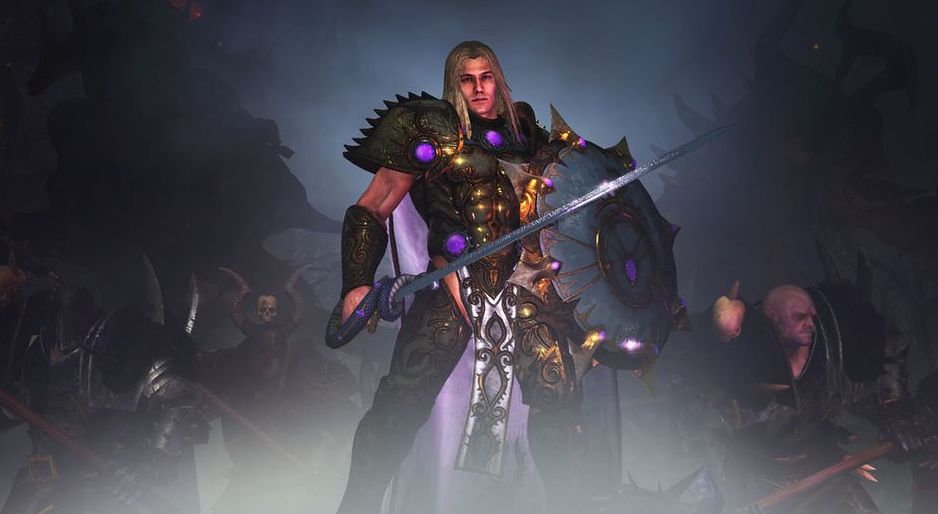 Such are the depths of Sigvald’s self-obsession that he will even call his retainers to attend him with their mirrors in the midst of battle, preening and murmuring compliments to himself as men plunge into battle and die all around him. Sigvald’s baroque armour remains forever untarnished by age or the tiniest fleck of dirt, and warm perfumed air surrounds him even during the fiercest blizzard. The ground itself reshapes itself to let Sigvald pass, and his feet float an inch above the world’s surface so that his boots are never touched by the mud or gore of the battlefield. He has defeated warriors twice his size with a contemptuous flick of his rapier, for Sigvald the Magnificent is the chosen scion of Slaanesh, his every wish granted in exchange for an eternity of depravity. 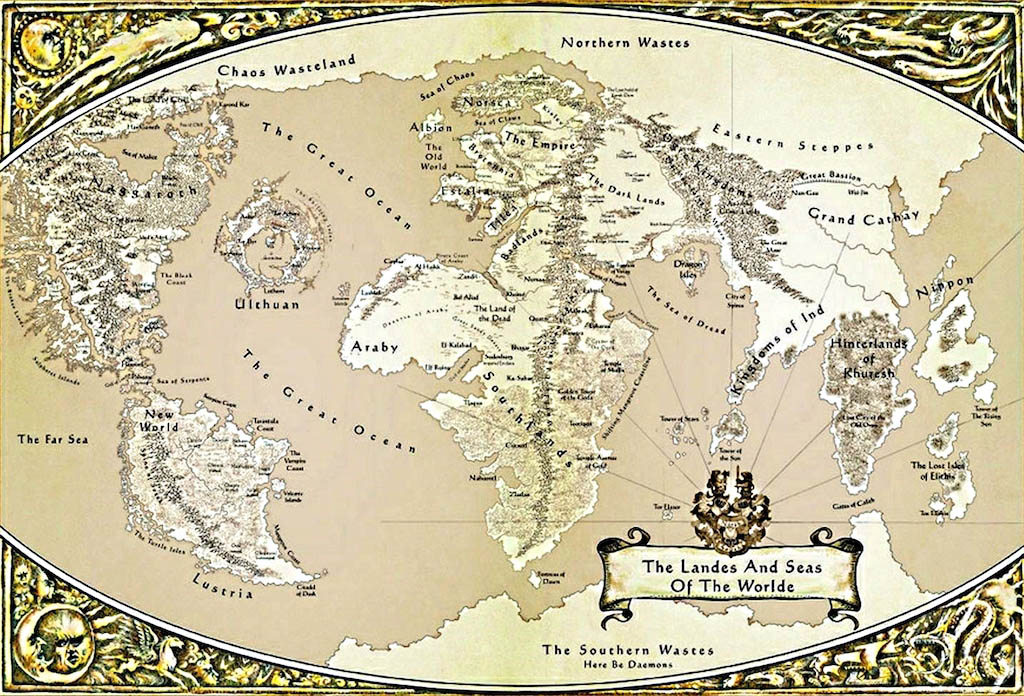 Sigvald was once the son of a powerful warlord-king whose dark desires led him to carnal and unnatural acts. When a child was born from the union of the warlord and his own sister, the bastard infant was handsome indeed. His hair was like spun gold and his skin was unblemished save for a tiny horned birthmark on the back of his neck. At first, Sigvald’s every wish was made manifest. However, the Prince’s excesses eventually grew too obscene even for his father and, when his fondness for human flesh was discovered, Sigvald was banished. The boy-prince feigned dismay, but when his father retired for bed, Sigvald slew him with his own blade. The boy-prince left the tribe, reasoning that a man of his calibre would thrive in the Chaos Wastes. And thrive he did, but not through honest toil. Before the next dawn, the young warrior had a new patron in the form of Slaanesh.

This all came to pass when Sigvald came upon a small valley nestled between a small mountain range, deep within the heart of the Chaos Waste. It is here that he found a serene and beautiful landscape, completely shielded from the horrors which rage across the northern hellscape. It was from here that Sigvald, in his desire for perfection, gave his soul to a daemonic Slaaneshi entity known only as Belus Pül. In exchange for his patronage, Sigvald promised the daemon that he would follow his dream and indulge himself in every kind of decadence no matter how slight. With his soul sold to the daemon, Sigvald was given the power he needed to acquire anything he so desires. 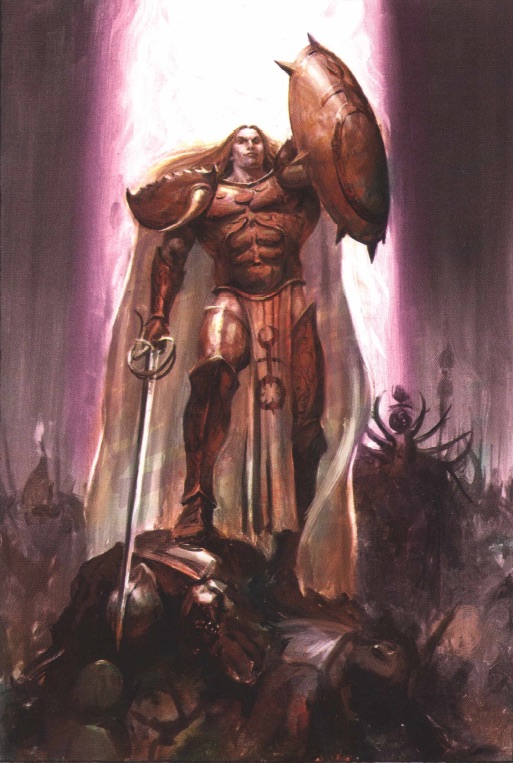 Hundreds of years later, Sigvald the Magnificent marches to war at the head of an army of admiring followers. Any who the Prince deems to be ugly, crude or irritating he has put to the blade, sometimes eradicating whole cities on a whim. Slaanesh spoils his adopted son as an indulgent father, and Sigvald’s wild excesses only serve to elevate him further in the Dark Prince’s favour. Jaded and capricious in the extreme, Sigvald the Magnificent ever strives to plumb new depths of cruelty in his conquests. He inspires fanatical devotion in his followers, for they know that in the aftermath of battle, they may sate their most unholy lusts without restraint.

It was the year 211 of the 11th Phoenix King. Having long felt aggrieved that the folk of Ulthuan were renowned for more fulsome and golden locks than he, Prince Sigvald took ship to the Island, his goal to scalp every Elf who crossed his path. With him traveled an army of blood-hungry Chaos Warriors, who cared not why Sigvald brought war to the Elven realm, so long as there was plunder to be taken and the glory of the Dark Gods to be earned. 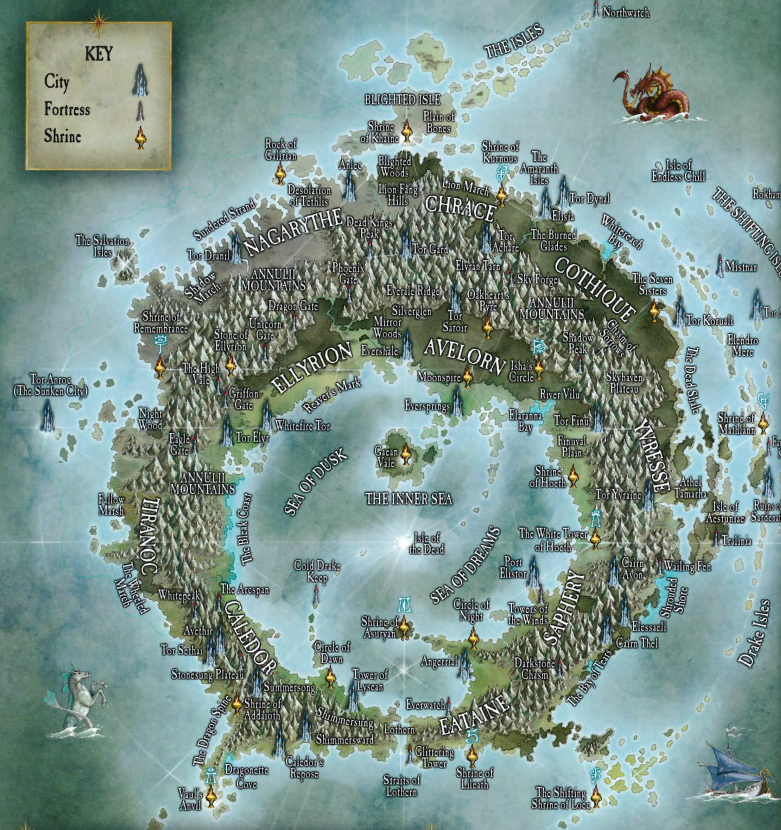 Princess Eldrya, by now a general in her own right, led the counterattack. Initially unsure of the Chaos horde’s size, Eldrya elected to harry the force as it headed inland. Charioteers were tasked with hunting down and eliminating Sigvald’s scouts, whilst Shadow Warriors launched daring night-time raids to destroy supplies, slay horses and assassinate the Chaos Lord’s lieutenants. At Eldrya’s direction, spells of concealment hid towns, waystones, and mansions from the oncoming foe. Harried and blinded, Sigvald’s army was soon lost in the Cothique highlands.

Division soon set in amongst the Chaos ranks, for there was little plunder, and no glory at all in enduring the lethal pinpricks of the Shadow Warriors’ attacks. Sigvald had to best ever more frequent challenges to his leadership, yet pride would not allow him to turn back or compromise his goals. Soon, he had slain as many of his own lieutenants as had the Shadow Warriors who plagued his advance. It was in the midst of one such death-duel, begun by a hulking brute named Dranak Goredrinker, that Eldrya finally unleashed her attack.

Pennants streaming, great spear-formations of Silver Helms pierced the heart of the Chaos army, slaying a great many of the Northmen before they could even form up. Even then, the Chaos Warriors could have prevailed, had Sigvald found it within himself to set aside his enmity with Goredrinker for a few hours. As it was, Sigvald’s vain refusal to halt the death-duel for such a trifling occurrence as an enemy attack cost his army dear. By the time night fell, the High Elves had won a crushing victory. Goredrinker had fallen to Sigvald’s silver blade, and what little remained of the Chaos army had scattered and fled. For his part, Sigvald simply wandered off in the final stages of the battle, hacking down any who tried to stop him. Goredrinker’s spilt blood had reminded the prince of a particularly rancorous bottle of Bretonnian wine he had once sampled, and he was suddenly minded to wreak vengeance on its creators. 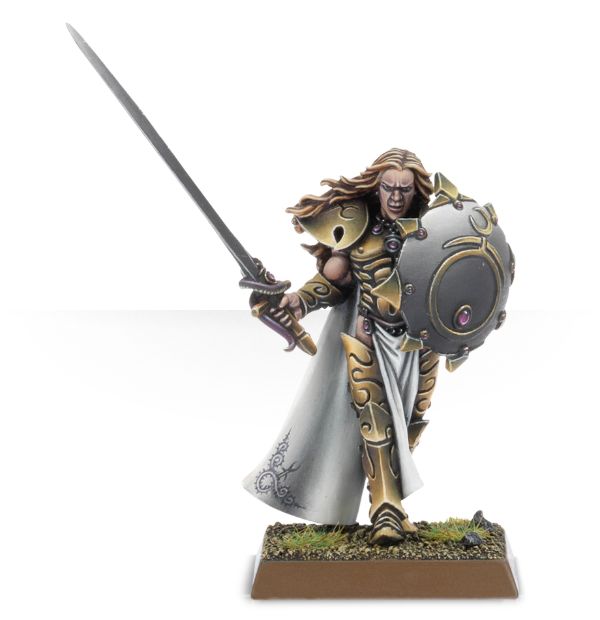 Sliverslash, Prince Sigvald’s sword is forged from a sliver of Slaanesh’s own blade. It moves like quicksilver, striking its foes down in a flurry of lightning-quick blows.

Auric Armour, The Auric Armour is a sculpted suit of plate mail forged from ensorcelled gold. Tendrils of dark energy constantly caress the skin of the wearer, rejuvenating his flesh and closing his wounds with a tender touch.

Learn More of Slaanesh In the Old World

~Will the Dark Prince pluck Sigvald’s soul and give him new life in the Mortal Realms?

Author: Larry Vela
Dad, Gamer, Publisher, Pilot, Texan. All games all the time since junior-high. I started BoLS Interactive in 2006. I’m a lifelong tabletop & RPG gaming enthusiast, and internet publisher working to entertain and inform my readers every day. I've been playing RPGs and Tabletop Games since the 1970s. I'm been playing and covering Warhammer and Warhammer 40K for over 35 years.
Advertisement
Age of Sigmar Lexicanum Lore Warhammer Fantasy
Advertisement