T’au Tactics: Lighting Em Up With the Tetra Scout Speeder 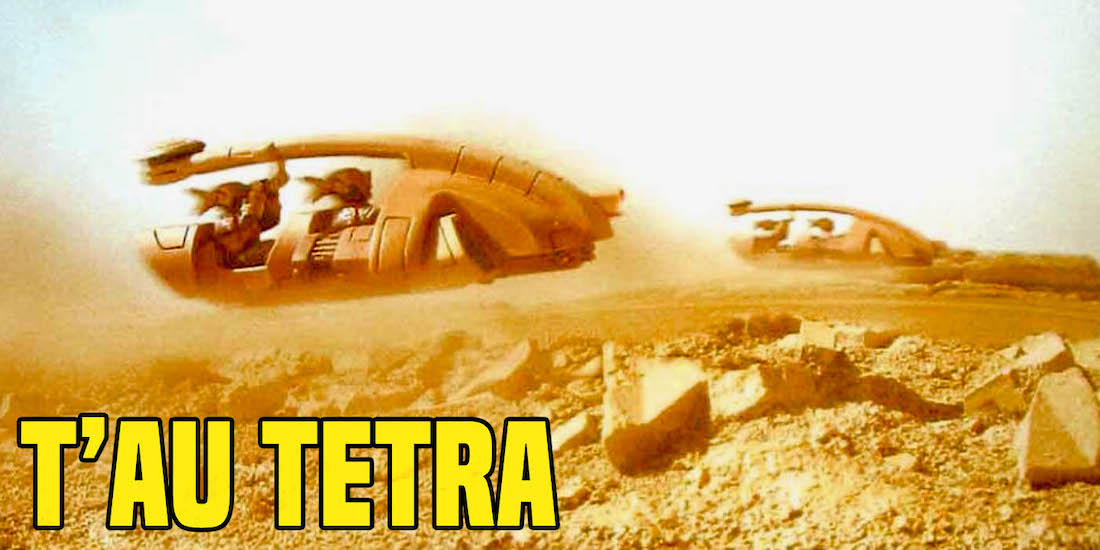 Piloted by two T’au Pathfinders, the Tetra excels in highly-mobile recon-gathering and forward scouting missions. Like the pathfinders that pilot it, the Tetra is not armed for direct engagements, but rather well suited for supporting other T’au forces through the use of its high-intensity markerlights. What’s a high-intensity markerlight, you ask? Apparently a super-duper laser pointer, this baby has “drone-controlled gyros” and can emit longer-lasting beams of light so that more salvos of T’au firepower can be unleashed with a single hit that the regular, old markerlights. On the battlefield, they are often seen in squadrons (probably due to their relative fragility and redundancy’s sake) supporting the core of the T’au Empire’s forces for that engagement. They can directly engage the enemy but with so few armaments, most try and avoid it.

On the tabletop, Tetras are a Fast Attack choice that must be taken in units of at least 2 but can include 2 additional Tetra chassis.

In general, the Tetra is a very fast, fragile vehicle with very little offensive power. It’s very fitting for the fluff. Unfortunately, though the fluff states that it can be a significant force multiplier, this is not the reality on the table. While it’s movement is very fast (the fastest in the T’au empire minus Fliers and the Coldstar Commander), moving at all will detract from its ability to hit with the high-intensity markerlight (HIM). And after all is said and done, that’s what you’d really be bringing Tetras for, the HIM. Because of the fact that it really is just a fast-moving markerlight platform when evaluating it, we need to keep in mind the other markerlight platforms – most commonly pathfinders, Cadre Fire Blades (CFB), and Firesight Marksmen.

As already stated, it trumps these other markerlight platforms in terms of movement significantly. I’m sure there are uncommon situations where you might value that movement more so that probably hitting with the markerlights. However, in general, you’ll only be hurting yourself when taking advantage of that phenomenal 18″ movement. This also applies to its special rule, Shadow Strike, since coming in from reserves counts as having moved for the purposes of firing Heavy weapons. You’ll be protecting it for a turn or two, but it can only wait until turn 3 before having to come in (or being destroyed) and when it does it probably won’t hit what it shoots, negating the whole purpose of taking it. Even if you wanted to use it as an objective grabber, there are better objective grabbers out there than the Tetra. 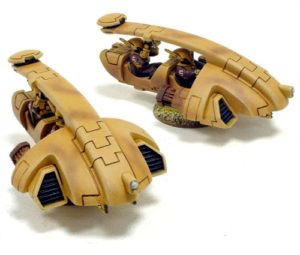 This ties in with a comparison of accuracy between the other units we’re looking at. Marksmen don’t want to move. They want to be deployed in cover and stay there for the rest of the game so they should generally never suffer from the -1 To-Hit from moving and firing their markerlights. CFB’s are slightly more mobile, usually following along with any gaggles of Fire Warriors you might have brought along. Even still, they’re hitting on 3’s thanks to being BS2+ and this is usually stomachable. Meanwhile, the Tetras are at best hitting on 4’s, but on 5’s if they move. Though the reward might be greater (more markerlight counters) the risk is much greater too. Competitive play and strong lists (in a lot of cases) are built around the concept of reducing as much variance and “luck” from the game as possible. This goes markedly against that.

Though it is T5 it is also W4 and Sv4+, meaning that it’s really not at all resilient against any number of common weapons. A small handful of plasma shots would, generally, wreck one easily. Compare this to the CFB’s and the Marksmen and even though their stat lines are not as hardy, they both have the <Character> keyword which, in general, doesn’t allow them to be targeted directly. The Assassin “Codex” might change those units’ movement restrictions and positioning in the future whereas the Tetra would not really need to give a second thought. However, nearly every army is going to be bringing weapons that seriously threaten the Tetra purely coincidentally and therefore I don’t ever see the Tetra being a superior choice based on resiliency. In addition, after you lose one of the required two Tetras, the Ld6+ means that you’ve got a 1/6 chance of losing a whole chassis. Piranhas are hindered by the same problem and are one reason why I can’t stomach the thought of running large squadrons, despite loving the concept.

So how exactly do we find the silver lining on this one (maybe I’m being unfair, but probably not)? Sa’cea sept. While not moving, Sa’cea sept allows you to have a 75% chance to score three markerlight hits against a target from a single Tetra, thanks to the reroll. Even when moving you’d have a slightly greater than 50% chance of hitting. This is better but it also doesn’t factor in any negative To-Hit modifiers that your opponent might be benefitting from due to chapter tactics or psychic powers. Sa’cea sept would also increase your leadership to Ld7+ (something I forget about all the time), and therefore you couldn’t lose the other chassis in an MSU of Tetras if one was killed. Also, something to note when a Tetra is killed, they don’t blow up. That’s…nice? I guess.

If your opponent does bring Tetras and starts them on the board, know that that they’re easy kill-points if out in the open. If they deploy them being something that blocks Line-of-Sight, then know that they will have reduced accuracy the following turn when they have to move out to shoot. Aliatoc and Alpha Legion are a couple of examples to really compound one of the biggest weaknesses T’au have – stacking negative To-Hit modifiers. Use this to your advantage through any other means you can, not just against the Tetra but to protect against all T’au markerlights. If they do start the Tetras in reserve, screening against them is probably not necessary, since they don’t really want to be closer to you than possible. With <Fly> though, be careful you don’t leave a backfield objective unsecured as the 18″ range could allow a Tetra unit to make a surprise rush at a key objective later in the game. Overall, if you’re comfortable dealing with markerlights through negative To-Hit modifiers and range, dealing with the Tetra is not much different. Also, low leadership, in general, can make it a target for any psychic powers that target its leadership and it’s middling save (with no invulnerable save) means that even your small arms fire could pose a threat to it.

The Tetra offers no real tactical superiority over other markerlight platforms apart from its movement, which then directly reduces its functionality for its main premise and role. For its points you can either take a CFB or about two Marksmen, so why would you ever really take a Tetra? With the next Forgeworld book for T’au (Fires of Cyraxus) being all but dead in the water, it’s likely that the current rules for Tetras will be in place for some time. Therefore, it’s safe to state that Tetras will be gathering dust on many a shelf, suitable really only in Open or Narrative play.

Are there fringe lists that might make use of a Tetra to help Sniper Drones snipe Characters, or am I just being too wishful?

Author: Pablo Martinez
Warhammer 40k analyst, tournament reporter and Ultramarines enthusiast, I'm the man behind the 40K podcast: Signals From the Frontline. I seek to gather more knowledge about the Warhammer 40k and share it to unite both hobbyists and gamers. I began writing for BoLS in 2016.
Advertisement
Rules T'au Empire Tactics Warhammer 40k
Advertisement

40K: 3 Fanbois Butcher the Lore and Other Weirdness - FTN