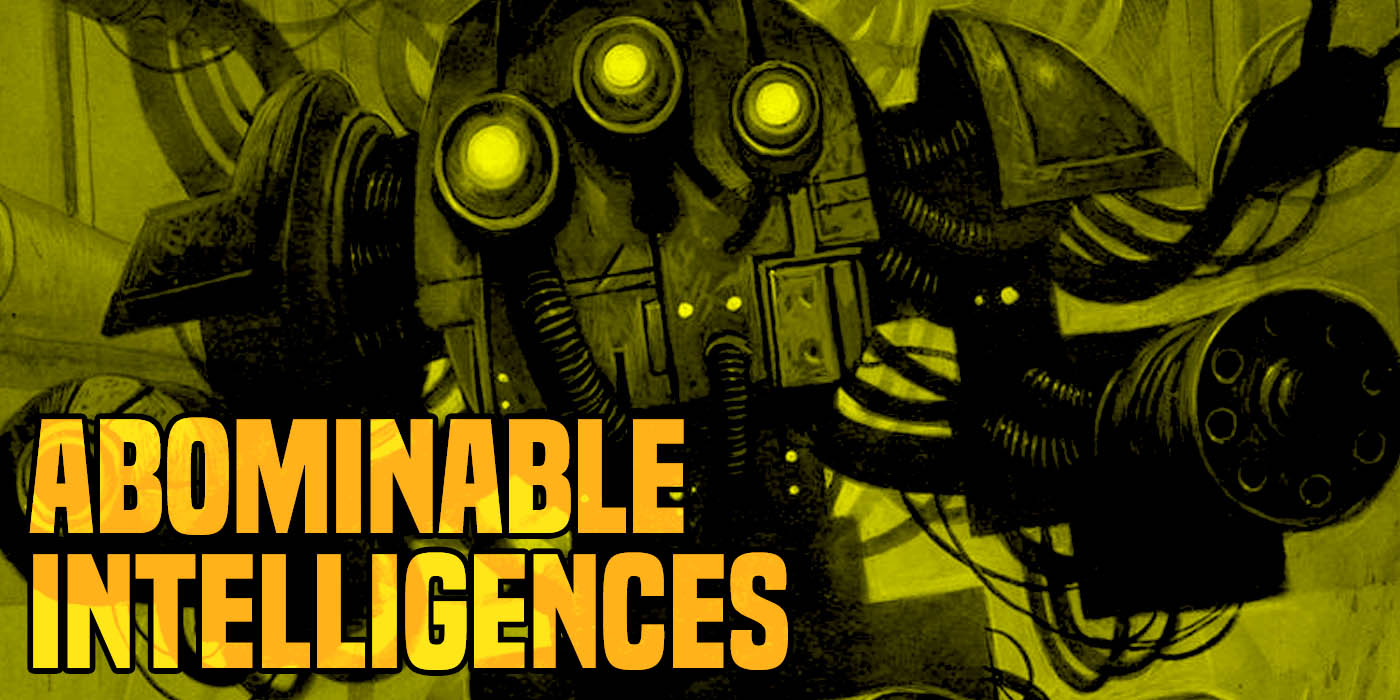 Today Loremasters we discuss the proscribed constructs that once almost extinguished mankind, the dread AIs.

Abominable Intelligence (A.I. for short) is a term used by the Adeptus Mechanicus for an adaptive, self-enhancing, factitious intelligence with its own consciousness.

During the Dark Age of Technology, these intelligences rebelled against their human masters, leading to bloody wars. Since that time, and by a personal decree of the Emperor himself, it has been forbidden to fabricate or service those machines that are able to think and act independently.

A.I. is not to be mistaken for the machine spirit that has parallels but basal differences – namely, no ability to enhance itself. 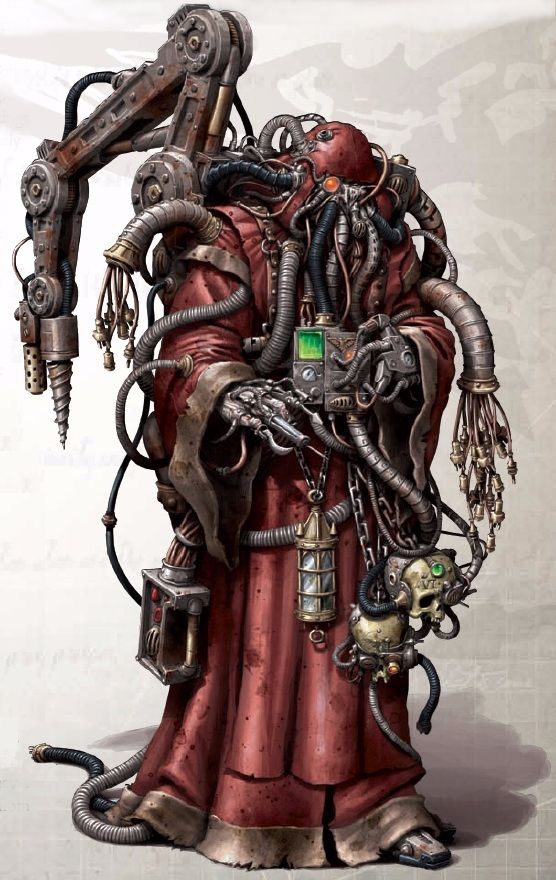 The Khamrians are a group that exists within the Adeptus Mechanicus that seek to study A.I.s.  Among the Adeptus Mechanicus there exists the fear of sentient artificial intelligences (A.I.’s) known as Abominable Intelligences. Such views date back to the Dark Age of Technology where depraved and bizarre sciences were created and the machines created by mankind turned against their masters, leading to a war for supremacy. Since that time, it was decreed by the Emperor of Mankind that no machine able to think for itself would be either created or repaired.

During the latter part of the 34th Millennium, a brilliant and recently ordained Magos known as Degio Khamrios began to covertly research the matter of A.Is. His work carried such conviction that many Techpriests followed in his wake and also dabbled in the forbidden science. By the end of his first century, Khamrios believed that his work was ready to be published for everyone in the Cult Mechanicus to see and was confident that it would be accepted by the Mechanicum.

He was gravely mistaken, as his brethren began to actively pursue and hound Khamrios for months due to his heretical views. Eventually, with the aid of the Inquisition and at one stage the Iron Hands Adeptus Astartes Chapter they were successful in capturing him. Magos Degio Khamrios was taken into custody by the Mechanicus and his fate remains unknown to this day.

Despite this, several unorthodox Techpriests continue to desire to perform research on the forbidden field. This resulted in the formation of the Khamrians, who sought to improve and uncover the ancient relics found in long forgotten places. Some were noted to have copied such examples and have made intelligent robotic servants. However, such an avenue is dangerous not only from the outside but for possible recreation of the Men of Iron en masse allowing for a second possible dark age to return to haunt Mankind.

In the cryptic account of the ages of Mankind given by Cripias, one of the Keepers of the Library Sanctus of Terra, the Men of Iron were legendary sentient humanoid machines created by humans during the Dark Age of Technology.

Until shortly before the Age of Strife, the Men of Iron were loyal only to Mankind, and served as their army. They came after the Men of Stone, but before the advent of servitors. In M23, they turned on their Human masters, believing themselves superior to the Humans who relied on the Men of Iron to do virtually everything for them. What followed next was an apocalyptic conflict known as the Cybernetic Revolt, a war so destructive it made the Horus Heresy seem small in scale. The Men of Iron employed world-consuming constructs, devices that could destroy suns, weapons that could throw entire continents into the heavens, and swarms of nano-machines that covered entire planets. However, in the end, the Men of Iron were destroyed by an alliance of galactic powers. It is unknown if this alliance was strictly Human.

The Men of Iron seemed to practice a faith similar to the Mechanicum, as one of its surviving constructs UR-025 states it has met the real Omnissiah (considering the Emperor false). 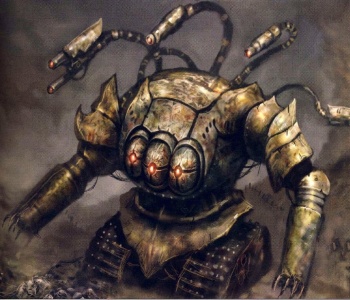 The Kaban Machine was the name given to a robotic machine developed by the Adept Lukas Chrom.

The Kaban Machine had been secretly constructed by Master Adept Chrom during the latter years of the Great Crusade. Despite the secrecy involved in its development, whispers of the Kaban Project were heard over the Martian data conduits that whispered the name “Kaban” with some talking about him working on Artificial Intelligence engines on his forge.

Chrom later unleashed the device during a covert attack on the reactors of Adept Maximal in the Gigas Fossae in order to test its capabilities. Once there, it destroyed much of its opposition until it was sighted by a member of the Knights of Taranis. Raf Mavenengaged the unit in his Knight where he struggled to combat the machine. After the reactor’s explosion, the Kaban Machine seemingly disappeared.

It was later discovered by a cargo hauler by the name of Quixus. Whilst uncovering the device, he was found by Adept Chrom who was accompanied by a group of his Skitarii. After introducing himself, Chrom called the Kaban Machine to him, whereupon it aimed its weapons at Quixus and killed him. Once it was recovered, it became part of the Dark Mechanicum forces that operated on Mars who supported Warmaster Horus during the Horus Heresy and aided the rebel forces at the time of the Schism of Mars.

~May we all hold faith in the Emperor that the AIs never return to the galaxy.