40K RETRO: The 11 Commandments of Apocalypse 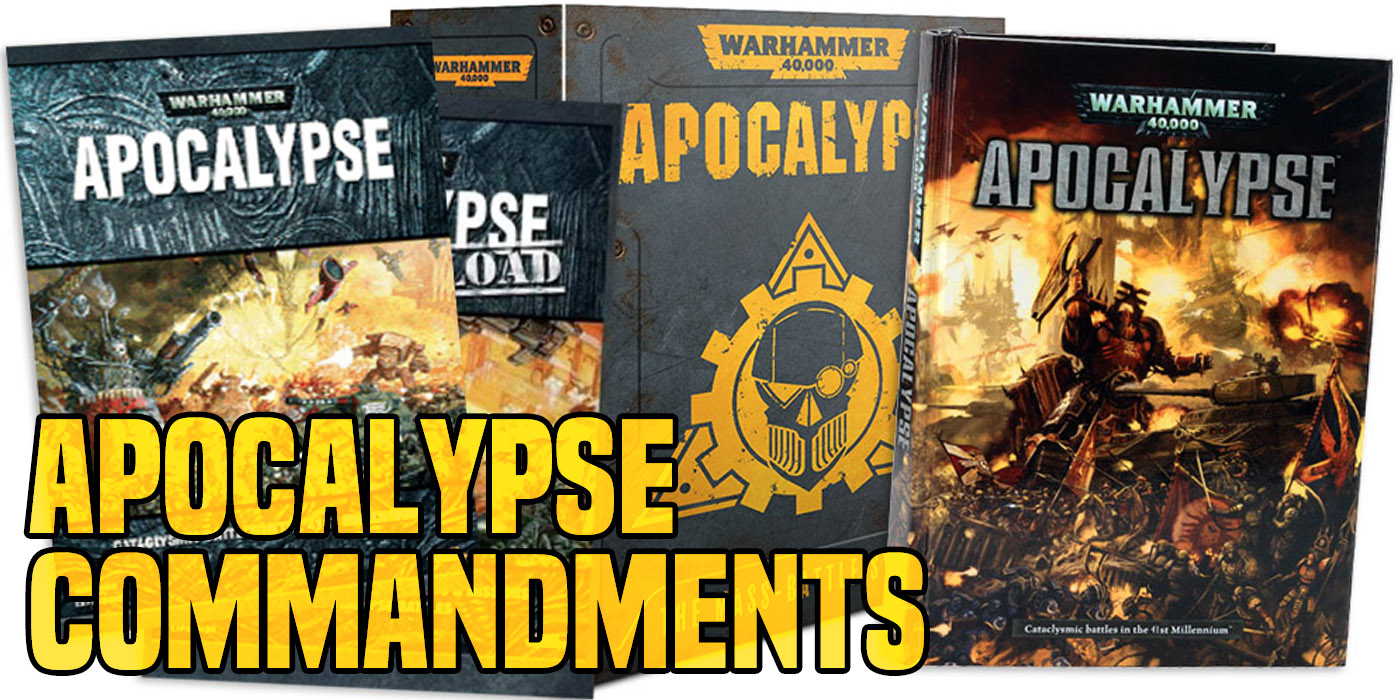 Apocalypse is coming in 2 weeks! We LOVED Apocalypse back in the day when it was shiny and new. We reached back 10 years for our “11 Commandments” to keep your Apoc games running smooth and fun.

NOTE: These rules were written 10 years ago for Apocalypse 1.0. We all have no idea exactly what the new rules will look like, and GW chatter says it’s an entirely new game – separate from 40K 8th.  We will be taking our giant toys and collections off the shelves, causing insane tabletop mayhem and will get you an updated set of these commandments as soon as possible.  So read the following with that in mind, and be thrown back to a simpler time, when the Baneblade was new, and 40K Knights were only a dream… Now we all know that an Apocalypse game can be one of the most fun spectacles that exists in the 40k universe. The bigger games can really be crafted to provide a type of experience that you just can’t get in the standard game. Entire companies of Space Marines storming into a breached fortress… Titans blasting entire Tank Companies into scrap, and so on.

However what the book doesn’t tell you is running a good tight Apocalypse game requires planning and discipline. If you want a recipe for disaster, just have 20 random folks show up and throw thier stuff willy-nilly on the table over several hours and see what happens…

Here are the Fly Lords 11 commandments for awesome Apocalypse games. You will of course need to adjust these to suit you local playgroup, but you get the idea:

APOCALYPSE COMMANDMENTS
1) REASONABLE POINTS PER PLAYER
We recommend no more than 3-4000 pts per person, not counting war machines. It is difficult for a single player to command more than that in a timely manner.

2) MANDATORY TEAM CAPTAINS
Pick your most senior player per side. His job is to keep your team playing efficiently. Not only does the team captain carry out grand strategy with his team, he is also there to:
-Let the individual players focus on their parts of the table, instead of having to worry about big-picture stuff (they can if they want to)
-He is available to roll for anything on his team if no-one is around to watch or take care of something.
-He mans the clock (bring an egg timer if you need to) and keeps the turn phases moving for his side.

3) NO WRECKS
Keep the table clean. If any non-warmachine is destroyed, it gets pulled from the table. Apocalypse games are notorious for getting all jammed up at critical areas of mass carnage, and becoming parking lots of dead models that make the board very difficult to play on. Just get the dead vehicles out of there.

4) NO DESTROYER WEAPONS WITHOUT APPROVAL ~ed, HA! I remember Destroyer weapons!
No one gets to bring Destroyer weapons by default. Only after both sides are balanced, do the team captains decide whether they wish to each take an equal number of Destroyer weapons. They should select these as a pair and dole them out to key team members so there are no surprises.

5) NO STRATEGIC ASSETS WITHOUT APPROVAL
Same as with Destroyers. To many Strategic Assets will ruin the game and tick off most of your players. Assume both teams have none, then have the team captains both select a small number per team that they both agree on. These should not be secret, and need to be agreed on by both sides, as the Strategic Assets pool is not balanced.

6) NO “BIG GUYS” WITHOUT APPROVAL
The following units must be pre-approved for use:
-Any super-heavy with more than 3 Structure points
-Any Gargantuan creatures with over 6 wounds
-Any Forgeworld Gargantuan Chaos Major Daemon ~ed.Back when Forge World big units were REALLY scary!
Have the team captains determine which of these will be allowed per side. Keep in mind that these become more powerful the smaller the game, and may need to balanced out with Destroyer weapons as well.

7) ONE WARMACHINE/FORMATION PER PLAYER
This just keeps things simple, and prevents lots of unbalanced combos. Its easy for a single player to devise and implement nasty combos. Its harder to coordinate such tricks between different people.

8) “ZONE DEFENSE”
Assign team-members parts of the board to roll dice for. First priority always goes to a model’s owner of course, but if he is busy, rolling elsewhere, in the bathroom, or anything else, have a player assigned to that board section who can roll quickly for anything required.

9) WATCH THOSE RESERVES
Enforce the reserve rules. If stuff is not on the table by the start of turn 3, its DEAD. Players arriving late and just throwing things onto an Apocalypse table late game will destroy the flow of the game and often give their side a decisive late-game advantage. Don’t let this happen to your game.

10) DON’T SWEAT THE LITTLE STUFF
Stuff like going to ground, and even break checks get forgotten all the time (especially from turn to turn). Determine if you wish to skip these mechanics altogether or streamline them into something that can be resolved immediately (such as counting pinning results as an extra d6 casualties, or having units which could rally do so automatically and having understrength broken units automatically destroyed). Alternatively you should mark pinned or broken units in some blatant way so they will not get overlooked next turn.

11) HAVE FUN
Remember that Apocalypse is about FUN and telling a great story. About half of all games will end in ties, so don’t get bent out of shape and just relax. The most important skill in running Apoc games is to KEEP THE GAME MOVING. The biggest time killers are slow setup (use the time bidding system and stick to it), and folks milling around towards the end of each phase (team captains need to enforce time limits per phase). 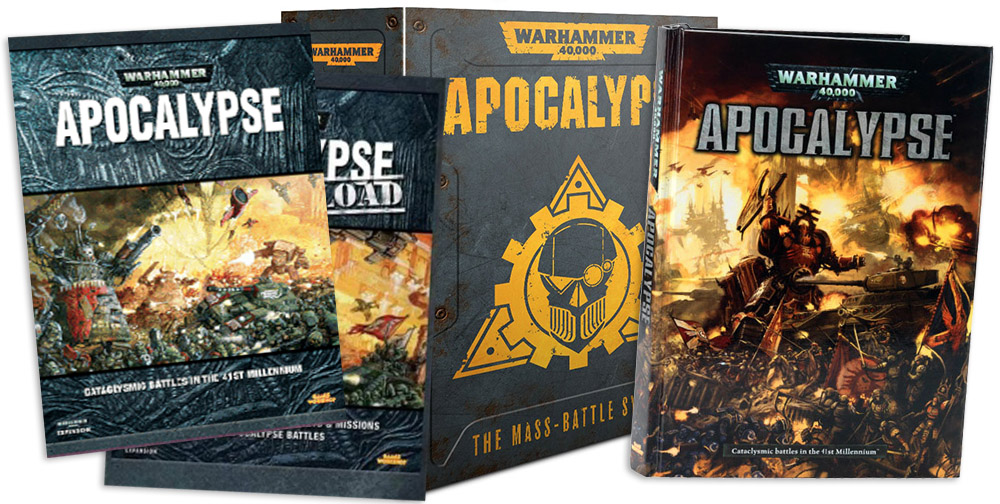 These simple rules should allow people’s normal collections to get used without being swamped by the big stuff, keep the game moving fast, and keep both sides feeling like they have a fair shot at winning. We have run 50,000 pt games with these rules that completed each full turn in about an hour. A well run Apoc game has the feel of the floor of a Stock Exchange, with 80% of folks running about moving, rolling, and laughing while the other 20% sit calmly, give key advise, and strategize. I hope you all like these, and lets hear about your local house rules for Apoc.

~The BoLS staff is SO excited about new Apocalypse!  We will be back with tons of articles, thoughts, and coverage as it rolls out!

Author: Larry Vela
Dad, Gamer, Publisher, Pilot, Texan. All games all the time since junior-high. I started BoLS Interactive in 2006. I’m a lifelong tabletop & RPG gaming enthusiast, and internet publisher working to entertain and inform my readers every day. I've been playing RPGs and Tabletop Games since the 1970s. I'm been playing and covering Warhammer and Warhammer 40K for over 35 years.
Advertisement
Retro Games Rules Warhammer 40,000 Apocalypse Warhammer 40k
Advertisement 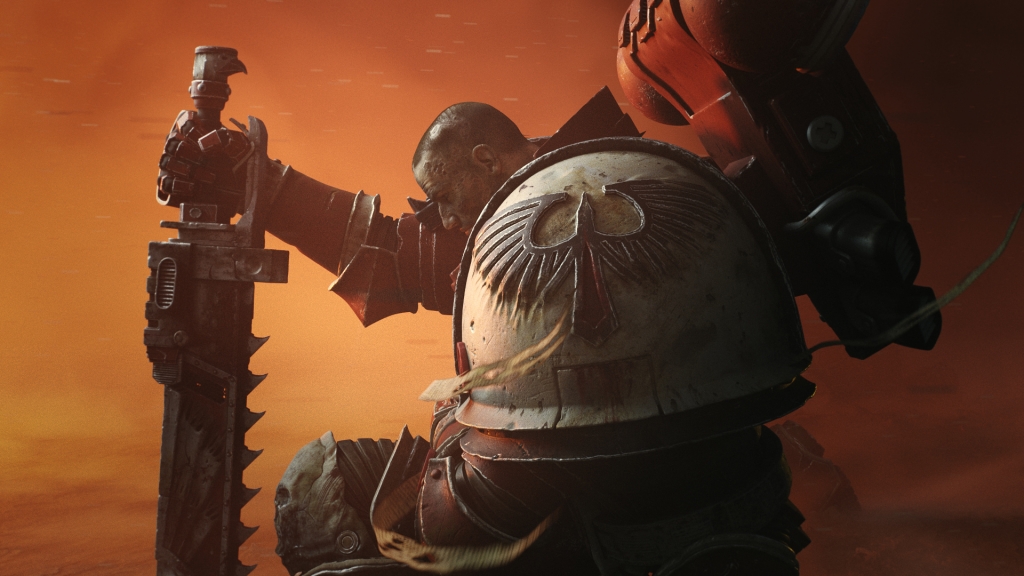