40K: Ten Stand Out Units From the Apocalypse Datasheets 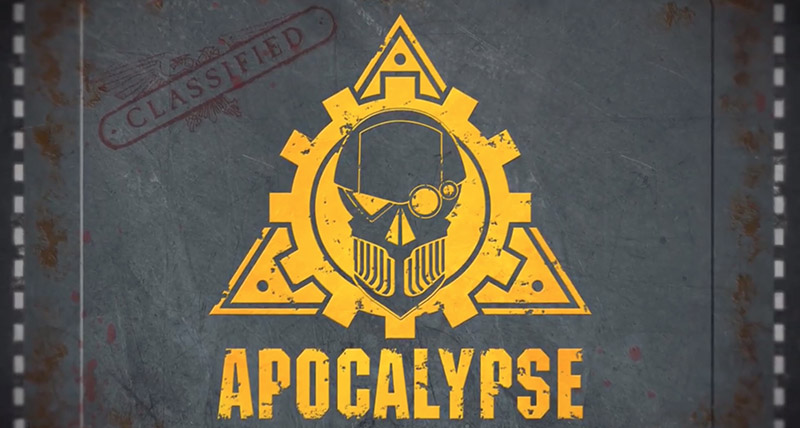 Let’s talk about some of the coolest and oddest units in the newly released Apocalypse Datasheets.

GW has just dropped the datasheets for every Apocalypse unit, both regular and Forgeworld, and we are having a field day. There is a lot to unpack here, with hundreds and hundreds of Datasheets to dig through and analyze. As we’ve been going through them a few have stood to us for various reasons. Here, in no particular order, are 10 of the datasheets that have stuck out from the non-GW section of the rules. 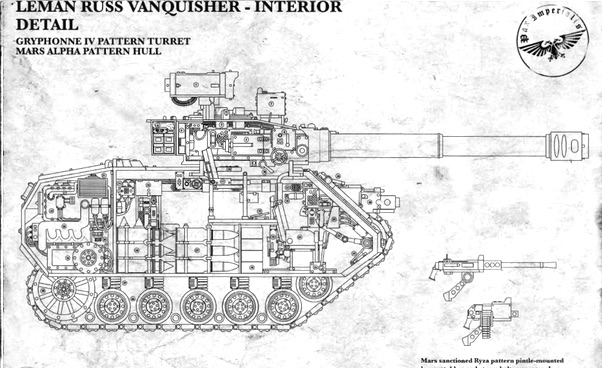 This one stood out for how improved the Vanquisher Cannon is in Apocalypse over its 40K counterpart. In 40K the Vanquisher has long been a pretty junk weapon, stuck with a single attack, on low BS its often considered a downgrade from the stock Battle Cannon. In Apoc the Vanquisher is actually a very solid weapon, with 2 attacks to the Battle Cannon’s 1 (as opposed to 1 attack vs d6). It wounds tanks on a 4+, and thanks to the Leman Russ rules can double its shots if the tank moves less than half its move. 4 shots that can wound a titan on a 4+ seems solid. 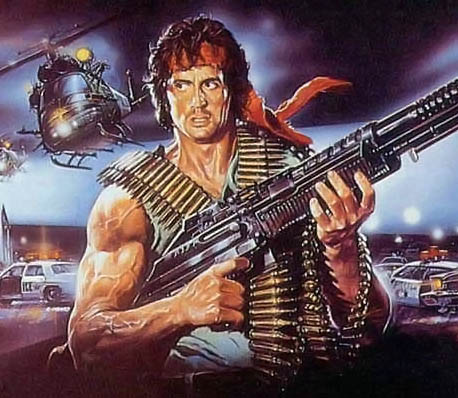 Overall Sly Marbo is a pretty basic unit in Apocalypse. This makes sense as he’s someone more suited to kill team then these kinds of battles. However his special rule Demolitions Expert does stand out as being pretty amazing. Once per battle Sly can just… hurt something, anything, anywhere, with no range or targeting restrictions. It’s a pretty decent ability and could be used to kill an important enemy character. But it doesn’t stand out for its battlefield use, what stands out is the sheer badassery of it;  you cannot escape Marbo, no matter where you hide, he will get you. 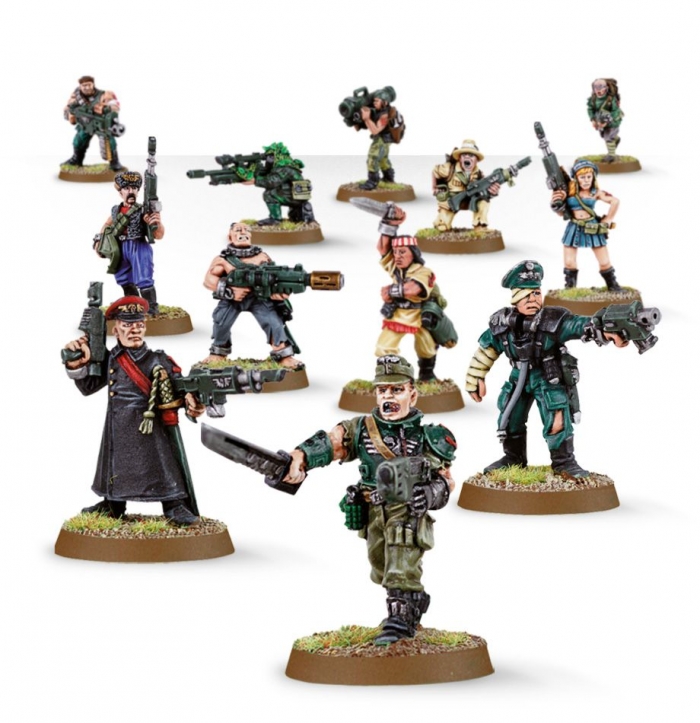 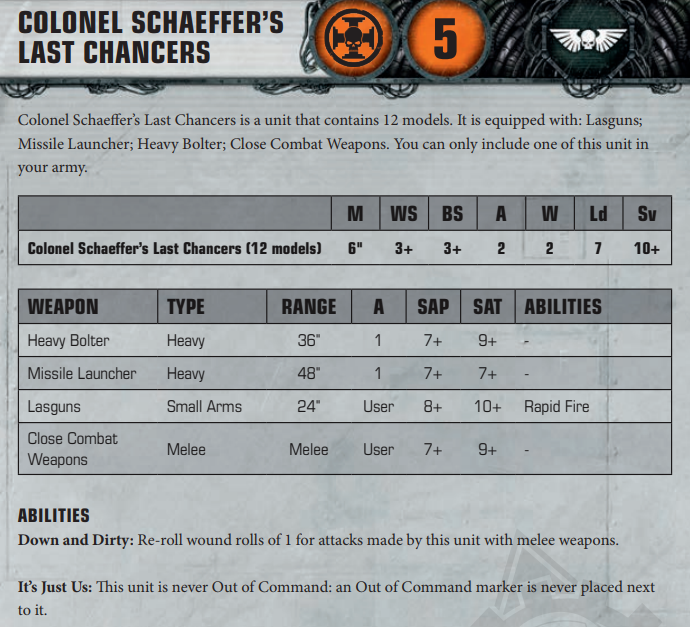 Holy Throne! Schaeffer’s Last Chancers are in Apocalypse. This is pretty cool/crazy since this is a unit that’s not currently in 40K. The fact that Apoc is including units that don’t have 40K rules shows how comprehensive they were with datasheets. Also, does this mean we could be getting Last Chancers in 40K again?? Please and thank you. 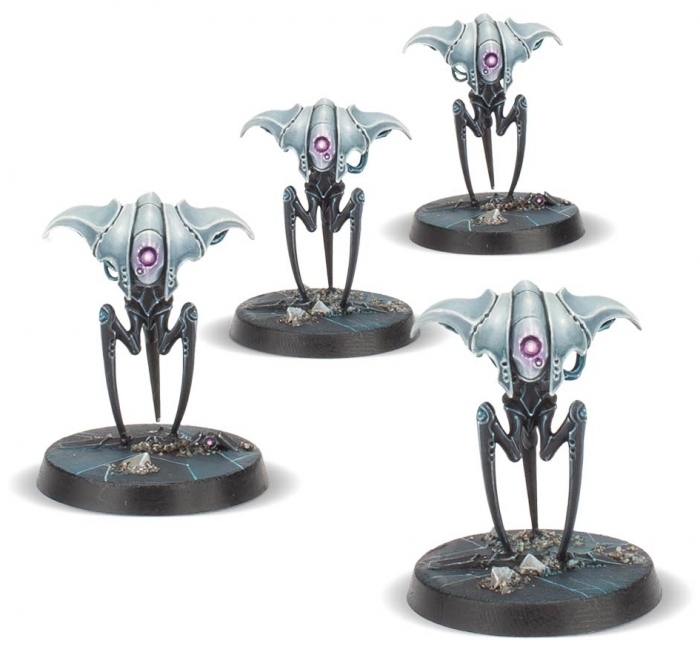 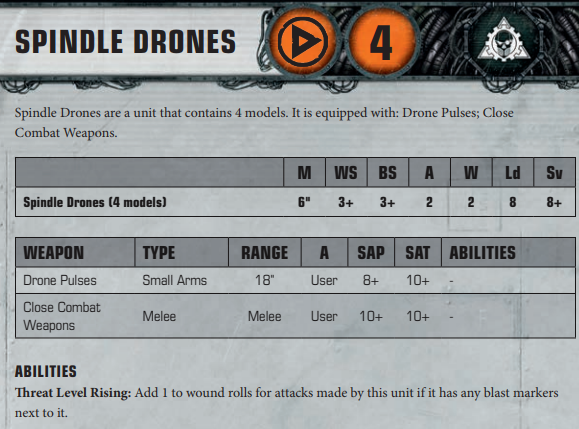 This was another unit that stood out to me as showcasing just how comprehensive the Apocalypse datasheets are. The Spindle Drones from Blackstone Fortress got rules, as did other strange units like the Gellerpox. Apoc really is bringing over all the units from 40K, even once like the Spindle Drones no one was really asking for. 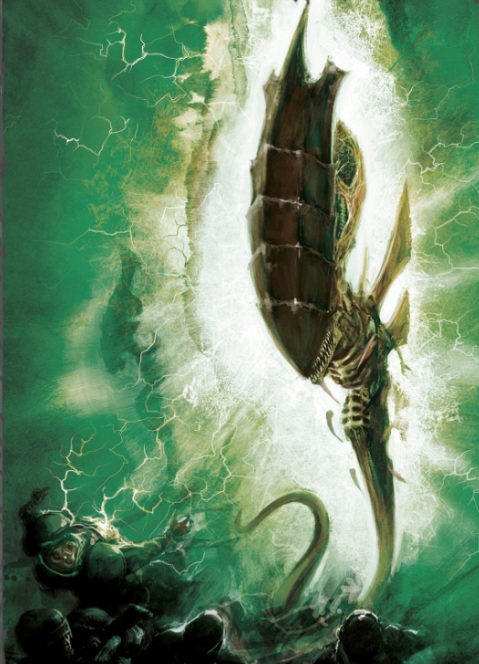 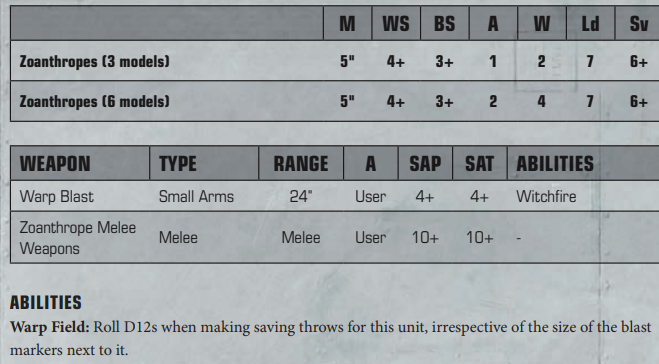 Zoanthropes are already a solid unit in 40K, but in Apocalypse they are going to be showing up a lot I think. Their attack packs a punch, but what really stands out is the Warp Field ability. We’ve seen other units with something like this, Abbadon for instance, but its pretty rare in Apoc and always getting a 50% chance to shrug off attacks is solid. 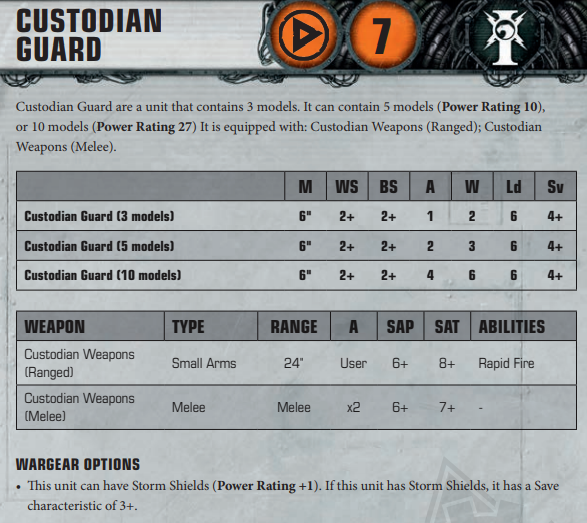 I don’t think it’s a surprise to anyone that Custodian Guard are a powerful unit in Apocalypse. While their weapons are a little weaker than I expected ( would have figured they would wound better in combat) a ten man unit still gets a lot of attacks compared to most infantry units we’ve seen. That is not however the real impressive thing. What stands out here is the Storm Shield option, which you should always take. In a game where a good armor save for infantry is a 6+, being able to get a unit with 3+ save is amazing. Couple that with the 6 wounds of a full units its about as tank-y as infantry get in Apoc. Remember that save is on a d12 for small blast makers, and d6s for large. This is a unit that will have a Titan light them up and walk away. 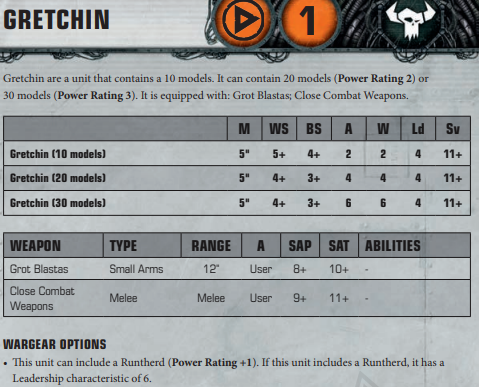 At the other end of the spectrum for the Golden Boys, are the humble Grots, possibly the worst and cheapest unit in the game. At 1 point for 10 models the only way you could get cheaper is for them to actually be free. Now while Gretchin aren’t great at all, a unit of 30 cost only 3 Power Rating and still has 6 wounds to chew through. They may not look like much. but you can get almost 300 for the same cost as 10 Custodian Guard, and I honestly think the Gretchin would win that fight. This might be the scariest unit in the game, IF you have the models. 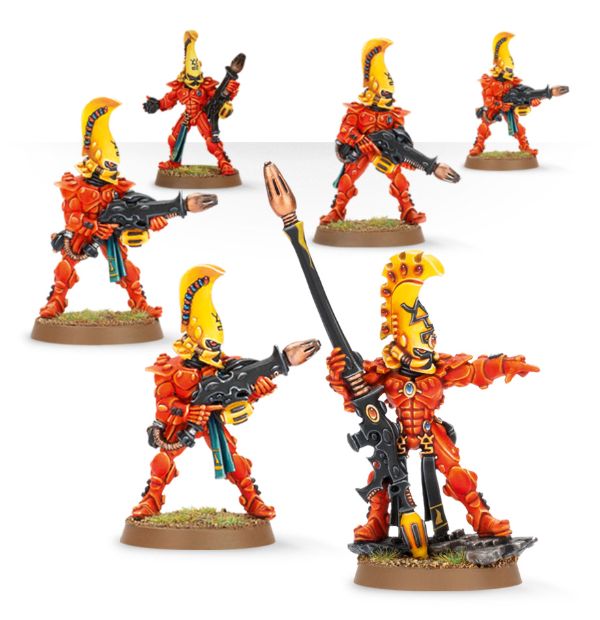 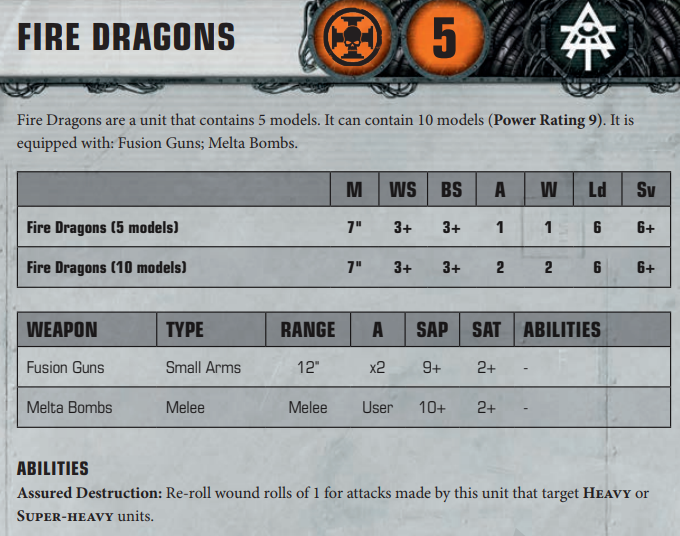 Fire Dragons are another unit that stands out to be for seeming to be pretty improved from 40K. Now 40K Fire Dragons aren’t horrible, but they are a bit pricey and have a limited role. In Apocalypse they seem to actually have a pretty reasonable price, at 5 PR for 5, or 9 PR for 10. What really stands out is just how reliably they are at killing vehicles. A 10 model squad will get 4 attacks with their Fusions Guns, against vehicle targets they are going to wound on 2+, on  a d12, and re-roll 1s. That’s as close to guaranteed to wound as you get. It’s pretty rare to see something like that.

This is a two for one because what really stands out on these dudes is their similar Primarch ability. This is basically Guilliman’s Primarch ability in 40K and Apocalypse – but given to his evil brothers. We know from using Gman that this ability is pretty bonkers, so having MORE models with it running around is… its fine, its fine, really. I bet Goatboy is already planning a Plagueburst Crawler battery around Morty. 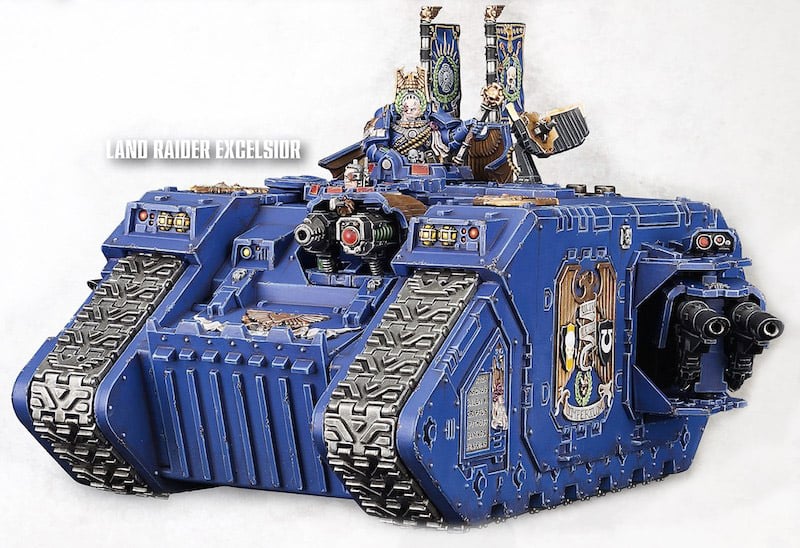 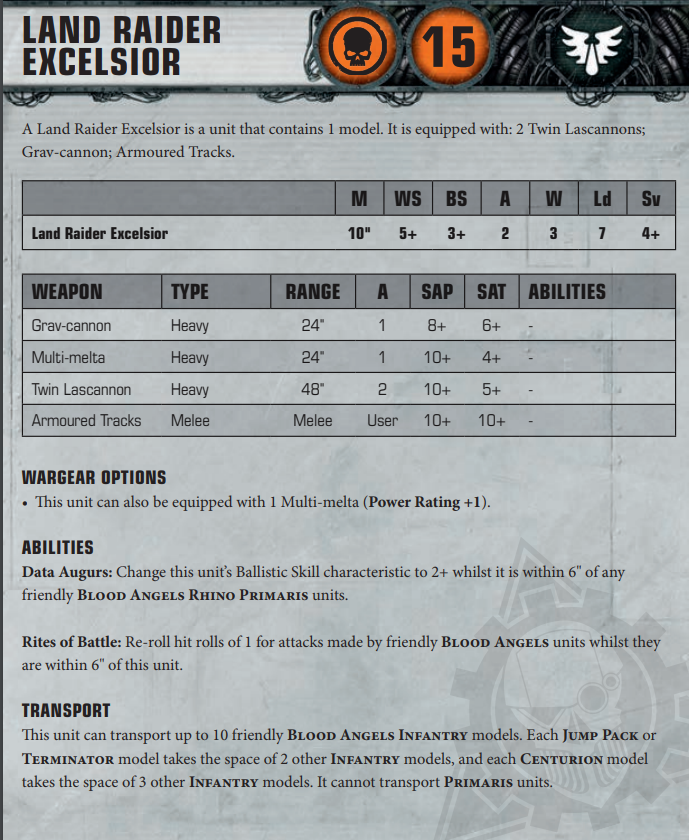 So uh, this is still a thing I guess? Another unit I had totally forgotten was EVER a thing gets Apoc rules, in the core set. And, I’ve got to say it’s not all bad at all. It’s a Land Raider that gives you a Captains Reroll aura at the same time. Overall, this is a strange unit, that could have a role. I think it could really fit in if you wanted an all armored force. It’s also an HQ option, so good for filling those slots for people we just don’t want to have any infantry on the table , and as a character it can be a warlord.

Let us know what Apocalypse Units really stood out to you, down in the comments!

Author: Abe Apfel
Abe is that rare thing, an Austin local born and raised here. Though he keeps on moving around, DC, Japan, ETC., he always seems to find his way back eventually. Abe has decades of experience with a wide range of tabletop and RPG games, from historicals, to Star Wars to D&D and 40K. He has been contributing to BOLS since almost the start, back when he worked at and then owned a local gaming store. He used to be big into the competitive Warhammer tournament scene but age has mellowed him and he now appreciates a good casual match. He currently covers 40K tactics and lore, as well as all things Star Wars, with occasional dabbling in other topics. Abe remains in mourning over the loss of WFB to this day.
Advertisement
Rules Warhammer 40,000 Apocalypse Warhammer 40k
Advertisement