Age of Sigmar: Painting a Loonboss on Giant Cave Squig 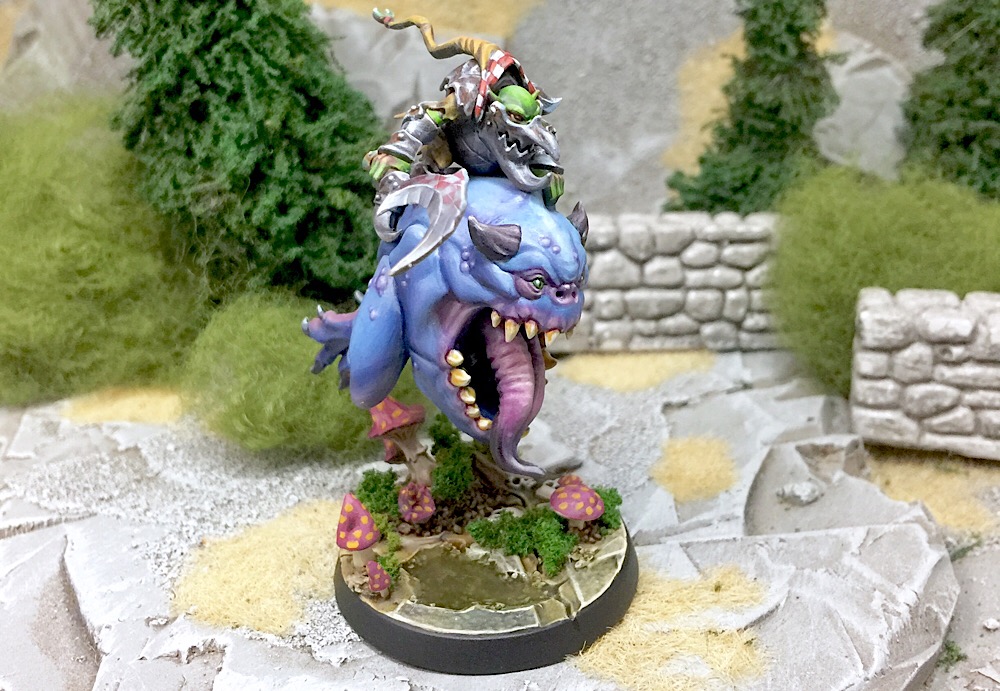 Come and join us as GentleBen takes you through the process of painting up a Loonboss to take charge of a horde of squiggly beasts.

I’ve painted up a Loonboss to lead my horde of squigs.

I’m still not good enough with an airbrush to do more than blast some zenithal highlights on in the early stages of painting. Here I’ve gone with a blast of Baneblade Brown over a base of Dryad Bark. Not much will be left of this by the time I’ve finished but it really helps give a guide when I get started.

Moving on I start intensifying everything with more layers. I add shading to the hood with just a little bit of Abaddon Black. Too dark – I’ll have to fix it later. Pure Fenrisian Gray is used now to really pick out all the edges of the armor. I’m going for an old but still kinda shiny iron NMM effect on the armor. That means narrow bands of really intense highlight against a much darker surrounding area. I also shade the metal with Abaddon Black mixed with a bit of Skrag Brown and Screamer Pink. The same colors are used on the scythe.

I continue with more layers on the armor, increasing both highlights and shadows. My attempts at shading the cloth still weren’t working out.

To fix the cloth I basically started it all over again with the original base mix trying to bring back in some more color. This time I went a little lighter on the shading, blending a small amount of Rhinox Hide and Xereus Purple into the shadows.

I also applied a bit of very thin Skrag Brown in some of the armor recesses to simulate rust. The rim of the hood began with a basecoat of Fenrisian Gray which was highlighted with White Scar. I was using the same colors to blast out the highlights on the scythe until it almost looked like it was glowing. Too much – I would have to tone that down too.

I was also building up the highlights on the boss himself. I began mixing Bad Moon Yellow and Pallid Wych Flesh into Moot Green to use as a highlight. I also pinkened the knuckles with some Screamer Pink and Cadian Fleshtone, highlighting them with a little Pallid Wych Flesh. The same pink went around the eyes and would have been used on the nose and ears as well – if they were visible.

The checkers on the scythe were an effect I’d been meaning to try for awhile. I got so involved in it I didn’t get any good WiP shots. Basically after darkening the NMM down to something that looked a little more fit for a grot, I applied each square individually with a thin glaze of Screamer Pink (which is not in any way pink) and a little Rhinox Hide. This is also when I painted the thin grid on the hood.

The grid was filled in with Screamer Pink which was then highlighted with Evil Sunz Scarlet. I applied the tiniest bit of the scarlet to some of the Scythe squares as well.

Of course the big squig had to be painted too. I gave him a blast of Kantor Blue from the airbrush. Then I mixed up a custom highlight with Maccrage Blue, White Scar, and a bit of Genestealer Purple and blasted it on for some quick definition. Then I slowly began to build up more definition. I actually painted on the highlights using airbrush paints with a traditional brush. I find their thin nature works just fine with my layering style.

All the shading was done with Druchii Violet, which is actually a Shade, not a paint. I’ve been mixing in more and more shades and washes along with my paint recently and I’ve been loving the results.

Using a mix of Cadian Flesh and Druchii Violet I began picking out all the exposed fleshy areas. These are highlighted with a mix of Cadian Flesh and Pallid Wych Flesh. I used the Druchii Violet to blend a black tip onto the tongue giving it a very narrow highlight of Wych Flesh. I also added some Screamer Pink to all the recesses around the teeth to really make the area pop.

This next set of pics is really all about those eyes. I started with a Caliban Green base. Then painted a thin line of Moot Green along the bottom of each. Next I painted on the slit iris shape with the same color. The next step is to draw a thin line of black down the iris leaving a lighter line on the edge to act as a highlight. Then give each eye a dot of Screaming Skull On the upper right. Pure white can work ok but sometimes it creates too much contrast.

The base is just one of the Shattered Dominion ones for AoS. To personalize it a bit I dug a big chunk out of it and filled it with some 2-part water after plugging the hole with plasticard and some grit..

The base set actually came with the extra mushrooms. And of course it needed some green flock too. 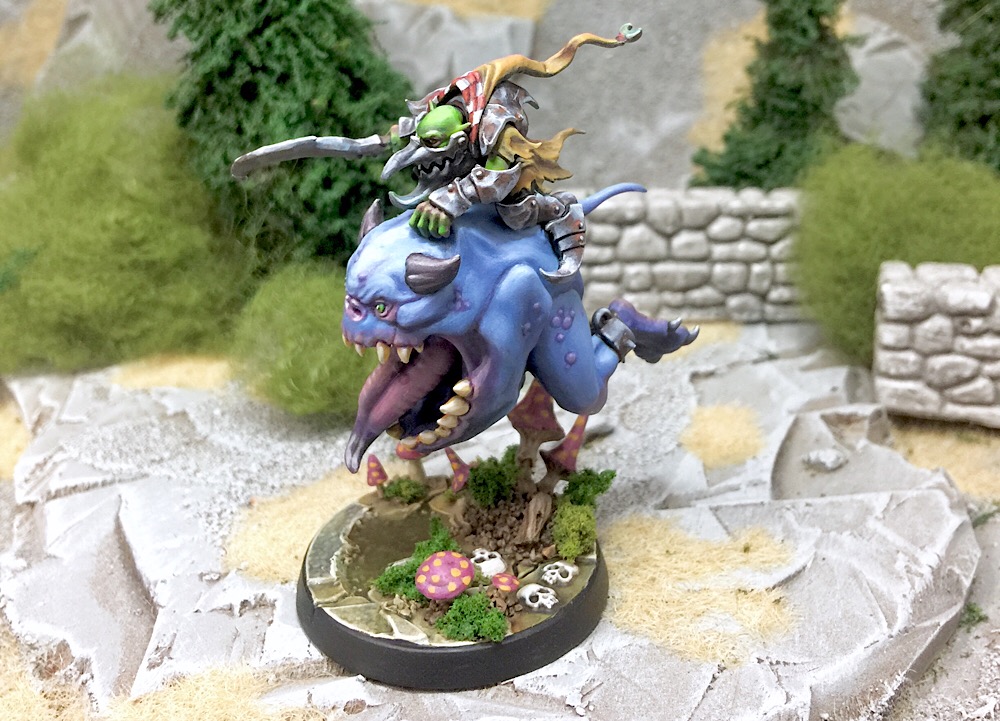 And here are some more angles. 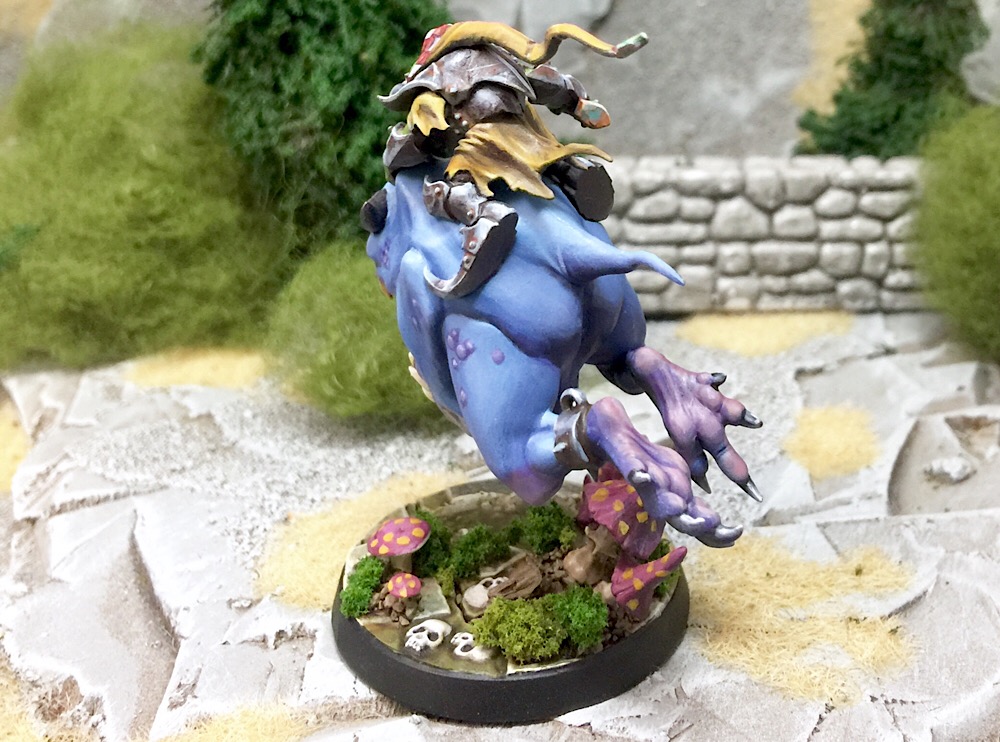 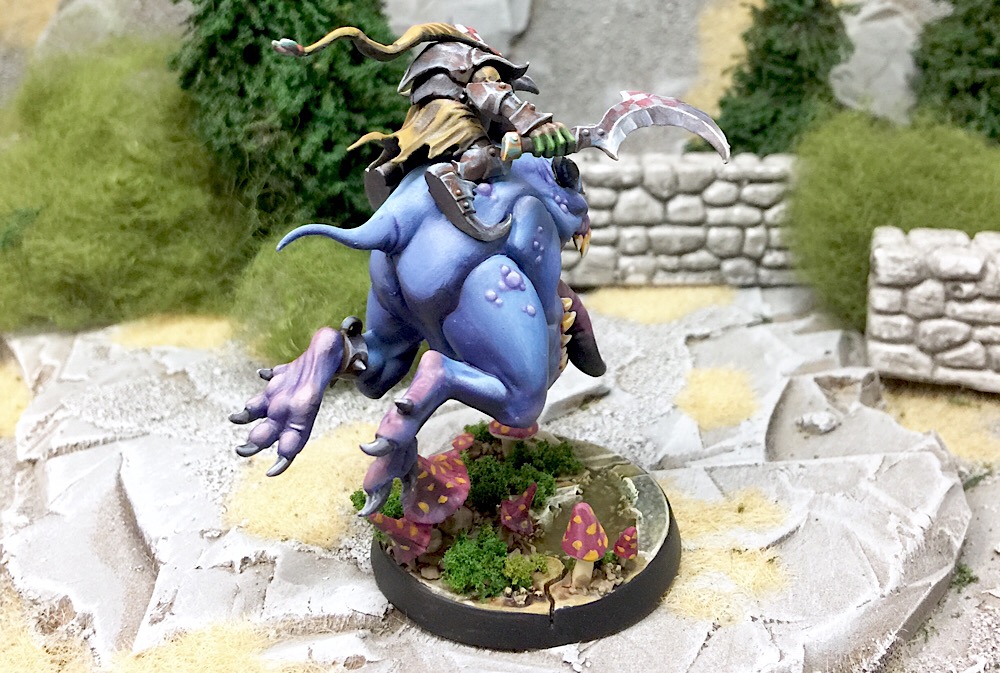 Hope there was something helpful for you in this article! There are a lot more painting articles on my own blog toomini.blogspot.com.

~And don’t forget, make sure to feed your squigs at least half a human a day to make sure they’re happy and healthy!

Author: Ben Williams
Ben Willimans is a Professional Painter and Columnist at Bell of Lost Souls. He has been involved in the hobby and art side of miniatures and the tabletop gaming industry for over 20 years. He has won multiple national painting awards.
Advertisement
Age of Sigmar AoS Destruction Hobby Painting
Advertisement