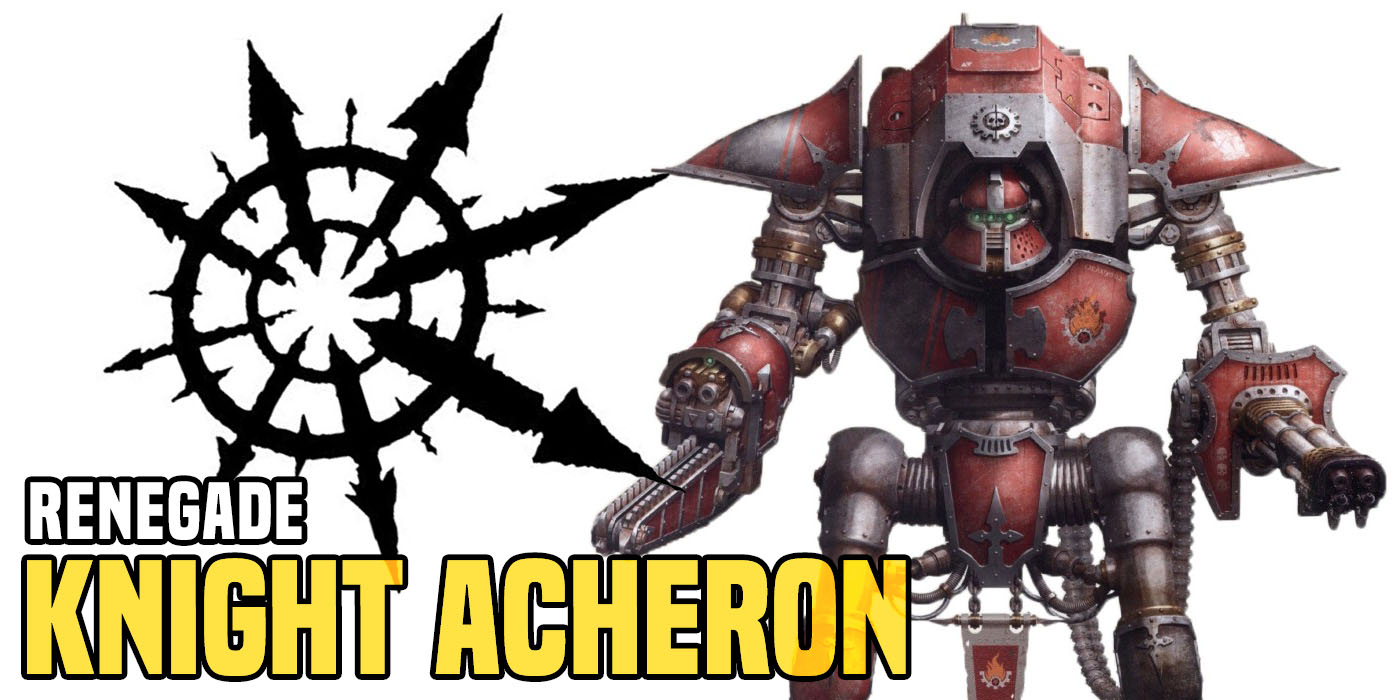 Today, we are looking at even more Forgeworld goodness for our spiked walking death machines, the Renegade Chaos Knight Acheron. If you love flamers, this is the Knight for you. 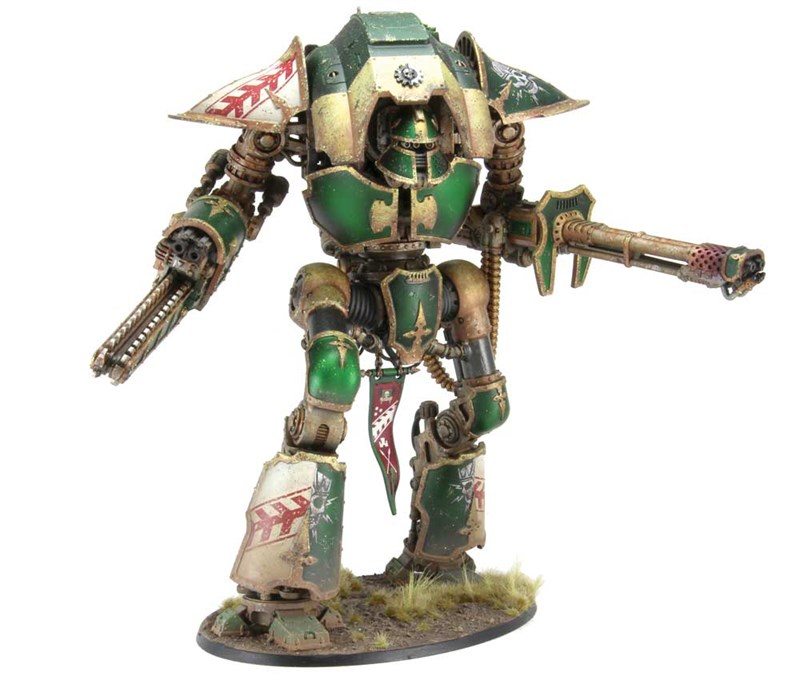 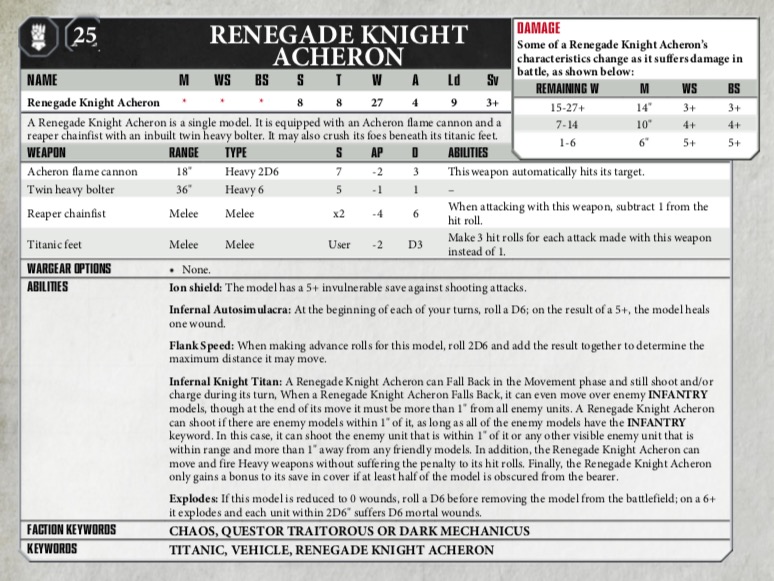 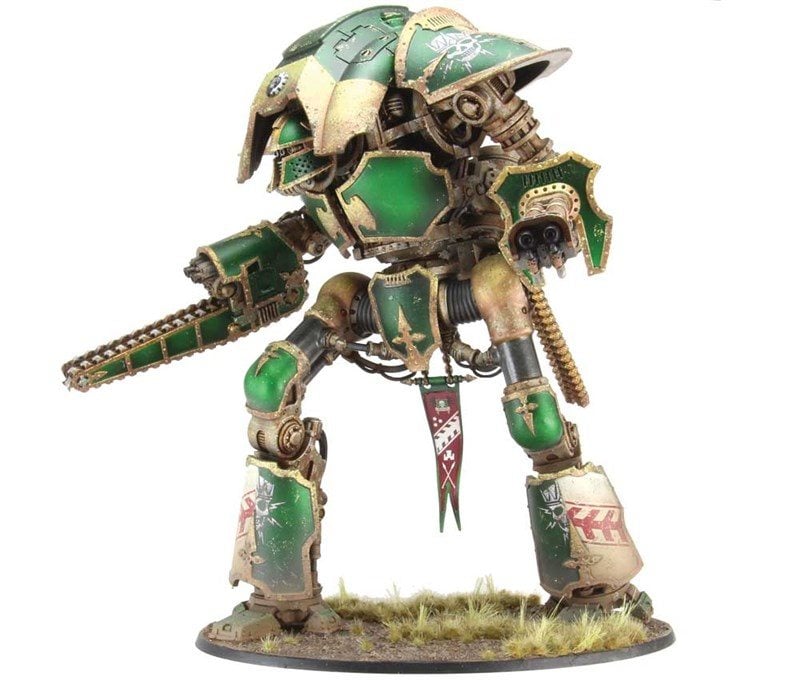 The Acheron is like a budget Flame Tyrant, and while you lose out on some volume of fire, you get an offensive weapon that also doubles as a strong piece of board control. The flame cannon is money, to put it lightly. At S7 and damage 3, it is a weapon that will absolutely murder just about anything shy of T8, and even then, with a good roll on the number of shots, you can put enough heat through as even 2 failed saves is suddenly 6 damage.  Range 18” is short, but if you factor in a 14” movement when healthy, the Acheron has a surprising threat range where it is not too hard to get a juicy target into range.   Since it autohits, the Acheron becomes a good answer to flyers and any other unit that relies on negative modifiers to survive, and especially against anything T6 and below, that cannon is going to do work.  It also has the benefit of being area denial as you essentially create a bubble around the Acheron of “if you come here, I will flame you”.  Even more, charging the Acheron becomes problematic as taking 2d6 autohits from the cannon can absolutely devastate a unit or even a harder target. Even Genestealer Cult Abberants are not going to like taking those hits at all. It is not entirely easy to piece trade for the Acheron in melee since there is always the possibility that you simply die to the overwatch.  This is especially true for melee characters that may only have 5 or 6 wounds as all they need to do is fail 2 saves to die in the overwatch.

The Acheron also has strong melee potential as it has 4 attacks, not 3 like a Tyrant, at WS 3+, and as a bonus, it has a melee weapon. The chainfist is not a Thunderstrike Gauntlet, so you can’t sub it out for a relic, but you don’t need to as it is already an amazing weapon that hits like a Thunderstrike without the negative modifier.  With the 14” speed, it is very much possible to get a Acheron to fly across the board and punch the beejesus out of a hard target or get some stomps on.  Because it has an autohit weapon, if it degrades, it is still useable as one part of its offensive is always at full effect, which is nice reliability as some knights are great when healthy, but suffer once they are in the mid-tier, but with the Acheron, you know that the flame cannon is always there for you.  All of this for about hundred points less than Tyrant and losing only 1 wound in the process (and a few guns). 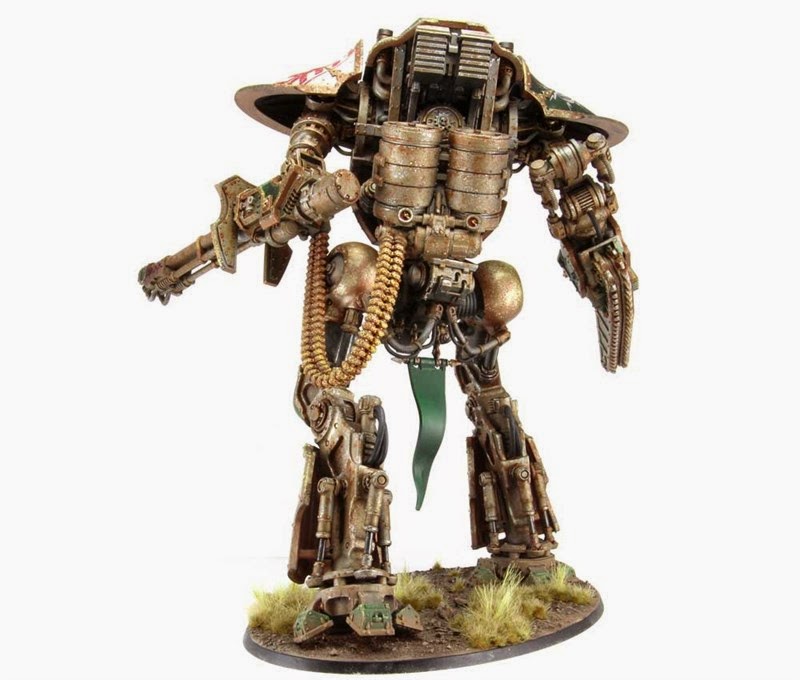 Ambition here is going to dictate how you want to play the Acheron. If you want survivability and more consistent melee, Iconoclast is a good way to go. The +1 attack and +1 to AP really makes the Acheron a scary melee threat with 15 stomps or 5 mega hits that are AP-5, which pretty much guarantees no armor saves on just about any target.  This also opens up a lot of juicy combinations with the Vows like Vow of Carnage to start wracking up the bodies to turn the Acheron super-saiyan in the midgame.  With the flamer and the heavy bolters, it is not too hard to get 10 kills a turn the first turn or 2, and then by turn 3, the Acheron charges in with 6-7 attacks or 18-21 stomps, and each 10 kills there is just more money.  As the Acheron is 27 wounds, Vow of Dominance is not terrible either to keep it alive much longer than your opponent would want, and again, since the flamer never worries about degrading, you can stick in the fight for a good while.  If the Acheron is going to be your main second wave threat that you want to stay alive and not rocket forward to die, the Veil is great for the  4++ all the time, but it is not necessary either.   Overall, Iconoclast gives you some opportunities to power up the melee and get more attacks with means more consistent kill.

Infernal is a great choice if you want full-speed aggression or a super soaker.  Being able to up-charge the flamer to S8 and D4 is insane, and if you roll well enough, that is a profile more than capable of taking huge bites out of hard targets.  If you plan to dance around at 18”, using the flamer more than the fist, this isn’t bad at all.  If you want speed and a first turn charge, Infernal is also good as +2 movement and +1 to advance/charge on top of 14” movement makes this a real possibility.  If your opponent deployed poorly, it is not hard to get the Acheron into their lines and snipe out a big threat on Turn 1.  Giving the Acheron the Blasphemous Engine isn’t bad either as it will take a long time to degrade, so you can sit and dance at flamer range and not worry about degrading if you need to also come in with the melee punch.  The Acheron is fast and somewhat short ranged, so it wants to be up close, which means you can easily get targets into range for Diabolic Rift to help hurt your opponent’s psychic phase.  Bind the Souls of the Defeated can work with the Acheron since it stomps just fine, but it is not likely to get you a ton of mileage.  That said, Pact with the Dark Gods on an Acheron is great as getting another turn with the flamer can be brutal, especially if your opponent had to over-extend to take it down in the first place.

Dreadblading depends on what you want to do.  If you aren’t planning on giving the Acheron the Veil or Engine, then Dreadblading has its place.  In Infernal, going for Daemonic Vigor gets you the chance for the super long threat. If you roll the 2+ movement, you are suddenly Mv 16”, and with Quicksilver Throne and Infernal supercharge, you are moving 18”, advancing d6+2, and with Full Tilt, charging 2d6+2.  That’s an average charge range of 32.5”, which is tasty to say the least.  This pairs well with 2 CP for Spiteful Demise as it is not likely to survive a turn in the middle of your opponent’s army, but you can make them pay of it.  Even if you roll the 4 or 5, getting WS 2+ on the Acheron just makes it a better melee threat. Path to Glory can be useful if going against another Titanics or character heavy armies where you want to make the most out of the fist, but that’s pretty corner case.  Daemonic Vigor is definitely the best option here. 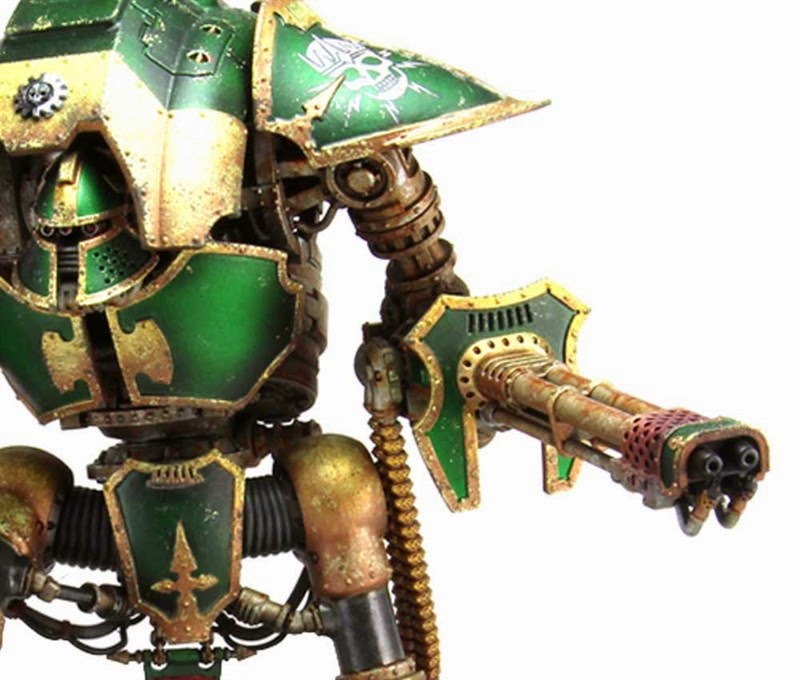 The Acheron, depending on what you’re doing, also has the benefit of being relatively CP light.  Since its primary ranged weapon does not roll to hit, you don’t need to spend 2 CP for Trail of Destruction for reroll hits, and it only takes 1 CP to Rotate Ion if you need it.  Of course, this depends on what else you are doing with it.  If you plan to Full Tilt and then Spiteful Demise, now you are spending a good amount of CP.

So what’s the downside here? Well, it is still 495 points, the same cost as a Dubgatt with much shorter range.  This means that the Acheron really needs to be close, and unless you build your army with a big screen that it can stay behind, it will likely die earlier in the game than you’d want.  The gun is also swingy, which is pretty on brand for Chaos Knights, as it averages 7 hits, but that’s just the average, which means on a turn by turn basis, you could roll 11 when you didn’t really need it and 3 when you do.  This is just the nature of it, and you have to either accept that and build a list with contingencies, or just let the dice happen and be stuck to their whims.  With only the flamer and twin heavy bolter, you are not generating a ton of shots per turn, so you fall victim to that toolbox style build where you have answers for many problems but none of those answers are particularly amazing.  The flamer is solid, but again, up to the vicissitudes of fate, and the gauntlet hits hard, but only useful against certain targets. Of course, there are also just the general problems that Chaos Knights have.  They require a lot of CP to really function at maximum efficiency, so you need to be taking at least a battalion of friends, preferably the Spikey 17.  They cannot move across the board freely, so it is easy to get wrecked by terrain, and of course, they are points intensive models that have to start on the board, so you are generally vulnerable to alpha strike. With all that in mind though,  If you are looking for a more swiss-army knife style Knight, the Acheron is a good pick, and if you are running a Conflagration Tyrant, an Acheron is a good replacement if you are trying to save points. 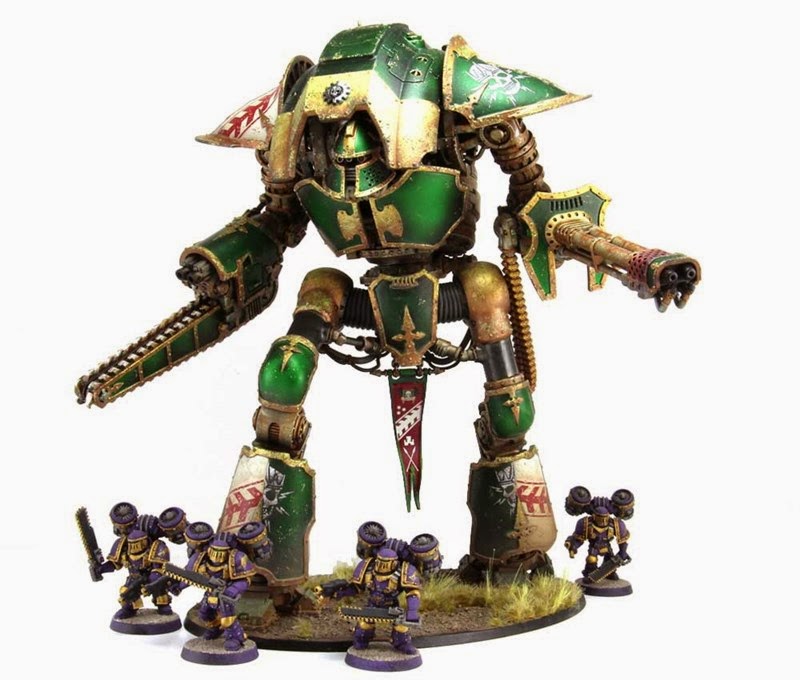 70/100 – The Acheron can do some good work in the right lists, and it is not so expensive that you cannot take other knights with it, and it has a lot of different play that you can leverage every game. It has one of the higher skill caps in the Knight line up, so a savvy general can use it in a variety of ways, but you need to be on point about how to use the Acheron from game to game. 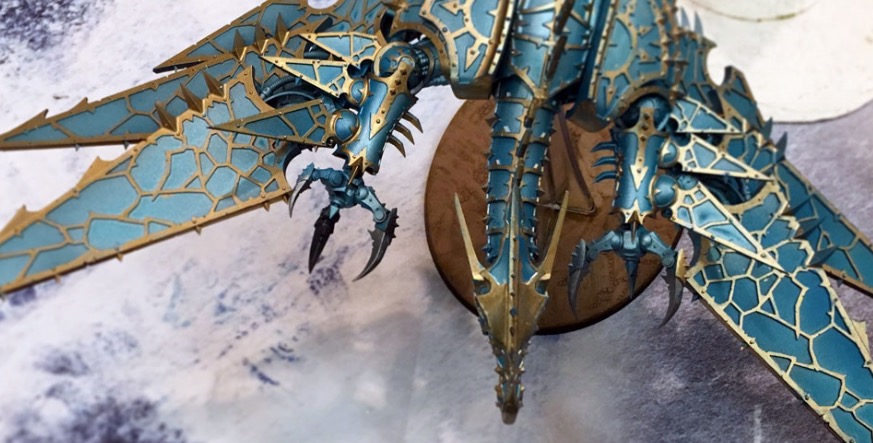