Board Games Retro: The WORST 90’s Board Game Ever?! 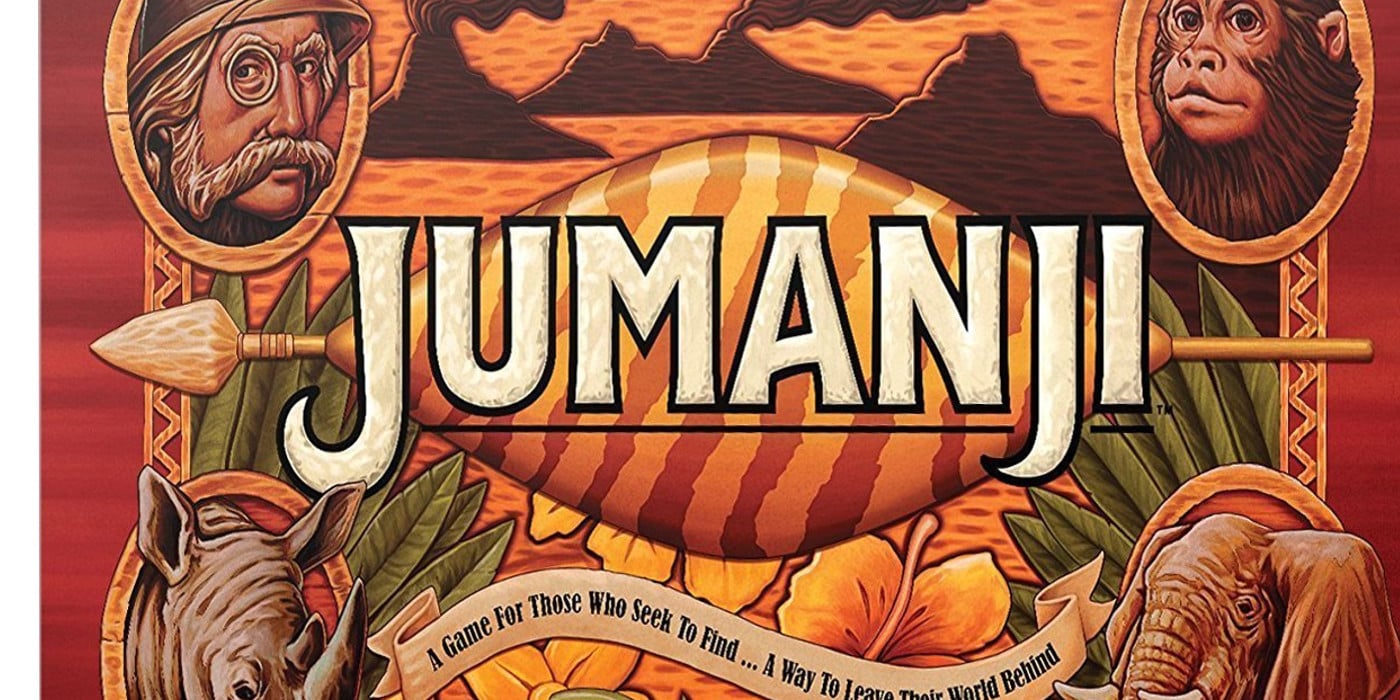 In this article you must wait, until the comment count reads five or eight (or even way more than that, if you want)

If you’re a rad 90’s kid, like me, then you can jam with the console cowboys in cyberspace and you probably also remember poor Alan Parrish who got stuck in the jungle after playing some crazy magical board game, but then turns out he didn’t actually do any of that because of some time-loop causality blankery. 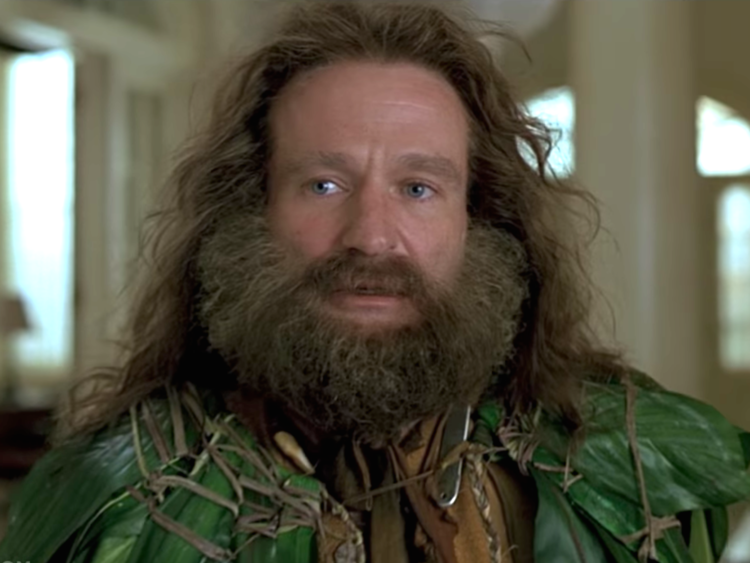 Jumanji was, with 100% certainty, the greatest piece of visual media ever created. At least that’s that 10ish year old me remembers and I refuse to allow him to discover otherwise. If you’re not a tubular 90’s kid and didn’t have kids around that time, you may have missed this masterful creation. So, 60 second summary:

Robin Williams finds a magic jungle themed board game and gets sucked into it for a few decades until some random kids accidentally let him loose as well as a plethora of jungle monsters and beasts. They have to play the game (which causes more jungly stuff to be released) to beat it to suck everything back into the game and make sure their parents don’t find out they are hanging out with a supposedly 38 year old man who had to discover puberty alone in the jungle. 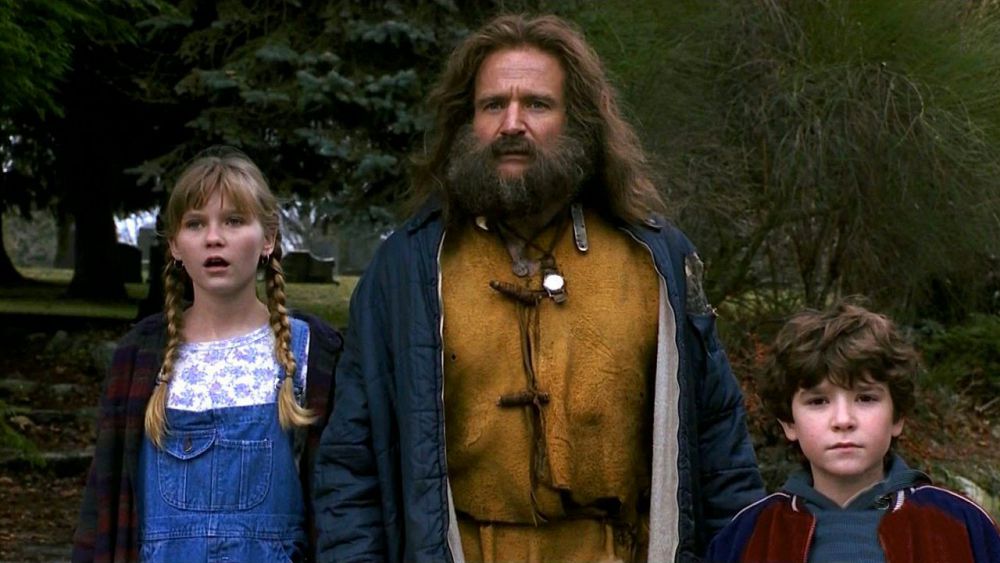 David Alan Greer had the right idea with this.
Also, don’t look directly into the camera, kid.

While poking around BoardGameGeek, as I am wont to do, I thought “I wonder what’s the lowest rated 90’s game?” Because these are the kinds of thoughts I have now. 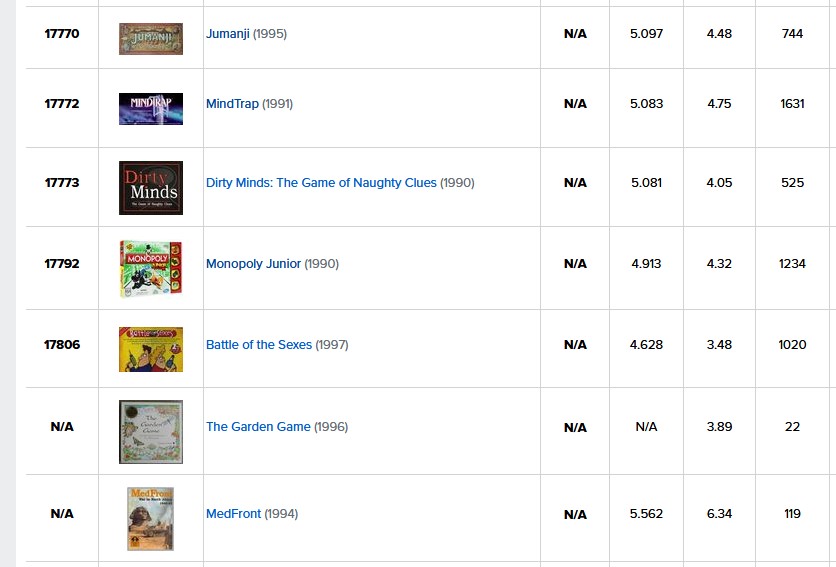 I decided to skip games without a Rank, because they don’t have enough votes to be property ranked); games that are trivia or puzzle based because they’re not game-y enough; and skipping Monopoly because I’m in charge here and I can do whatever I want. That left, surprisingly, Jumanji. I wasn’t expecting to see it on this list, but here we are.

I actually played this game as a kid since it was based off of the highest level of human ingenuity and creativity that has been or ever will be. But I’ll admit I don’t remember much about it except the card-reading visor. “What card-reading visor?”, you ask? Well, I’m glad you did because this is the part where we discuss…

Jumanji is a semi-cooperative but ultimately competitive roll-to-move game with some dexterity mechanics, kinda. The goal of each player is to be the first to reach the goal in the center of the board. 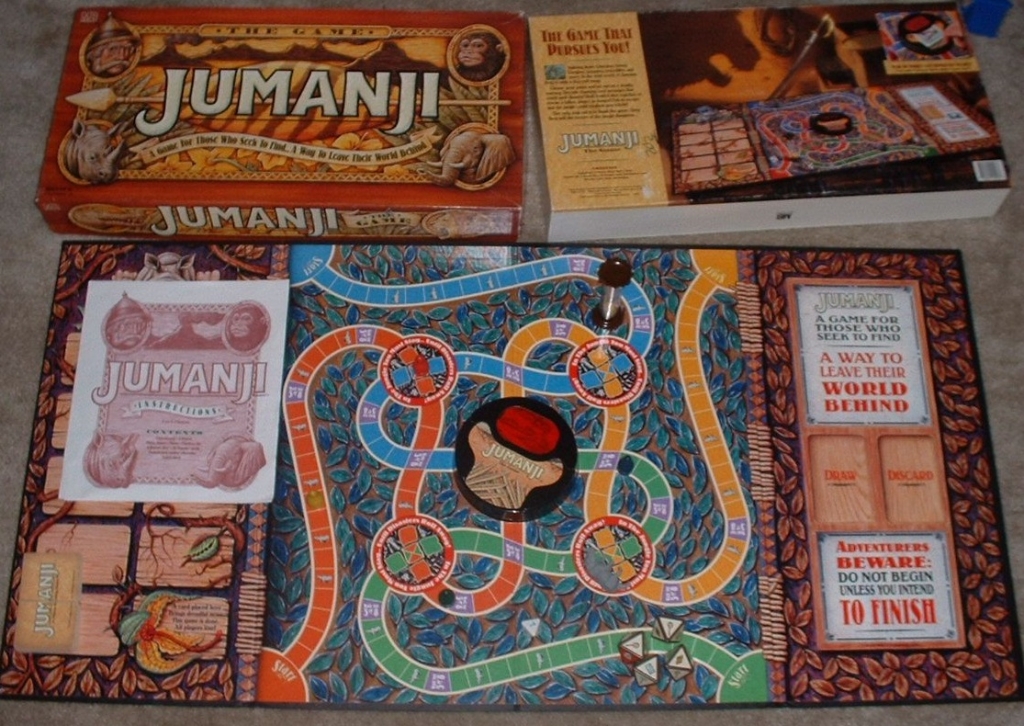 Along the way, players will land on one of 4 spaces:

The main mechanic of Jumanji are these Danger cards. They use that blue text on red scrambled background that was so popular with 90’s kids games. Clue Jr, anyone? 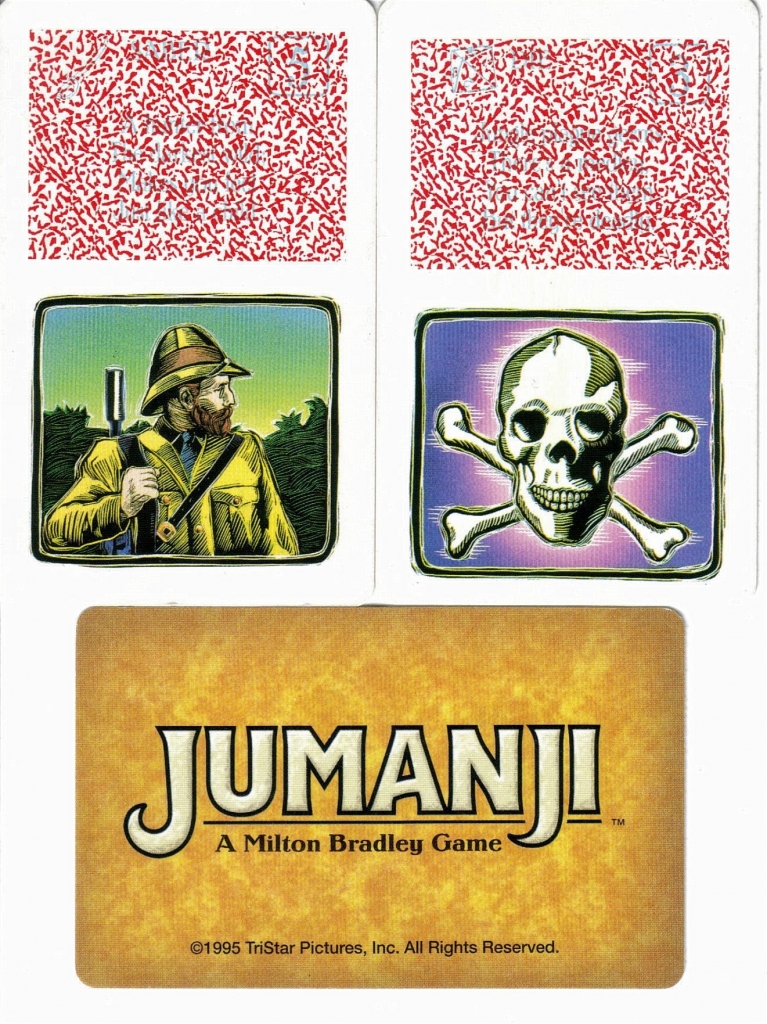 To actually read the card, you have to slide the card into the card-reading visor I mentioned earlier. 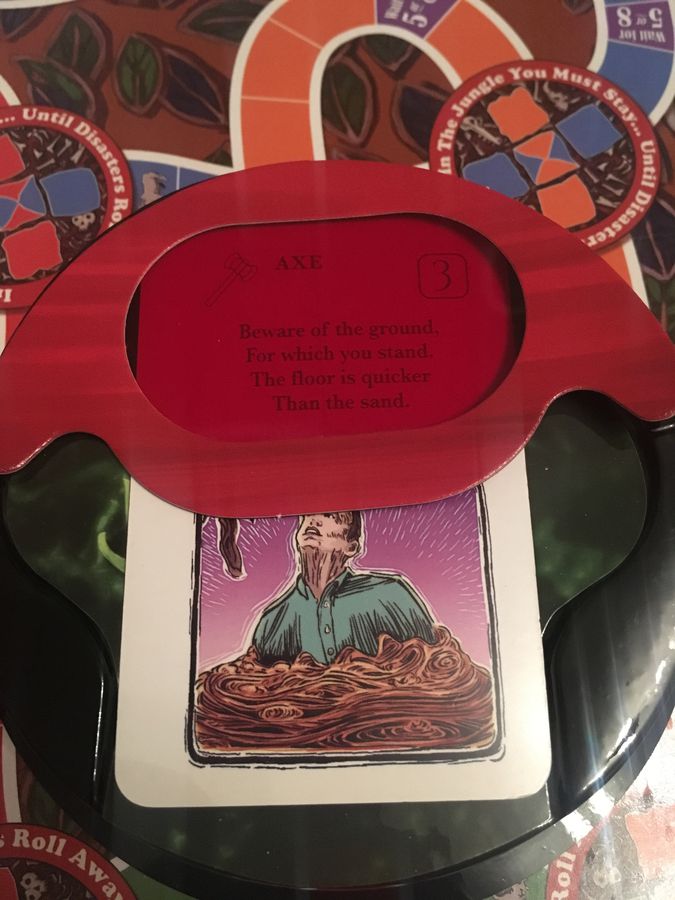 Or just let your eyes adjust to the blue text and read it direct from the card. Whatever.

This is where the dexterity mechanic comes into play.

Each player grabs a symbol die and one player sets the hourglass. 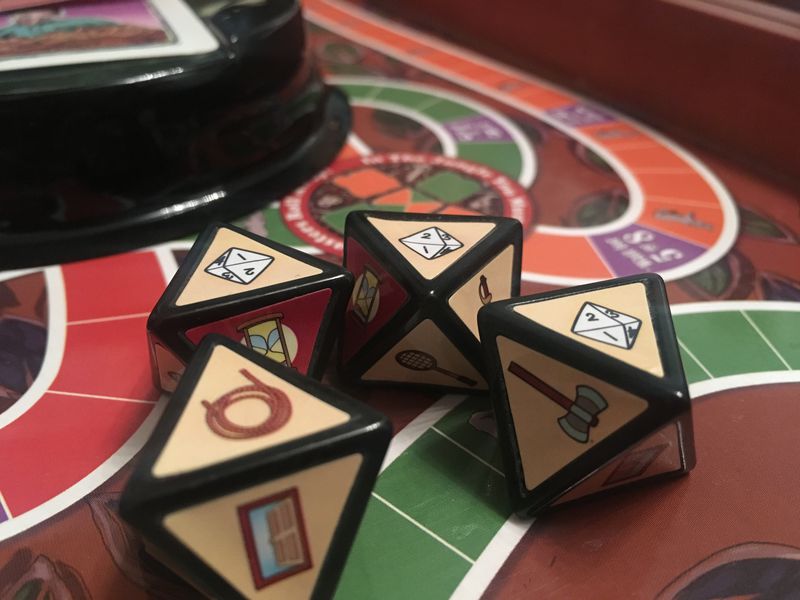 When the hourglass flips, all players begin frantically rolling their die, trying to match the symbol on the upper left of the Danger card. If all players do before time runs out (about 8 seconds), they beat the Danger.

If this was from landing on a blank space, ALL players move forward a number of spaces listed on the upper right of the card. If they failed, then the active player moves back that many spaces and everyone else stays put.

If this was from landing on a jungle space (those ones with the circles around them), then all players move forward on success and draw another card on a failure.

Each time a Danger card is failed, it gets added to the …. wait for it … … 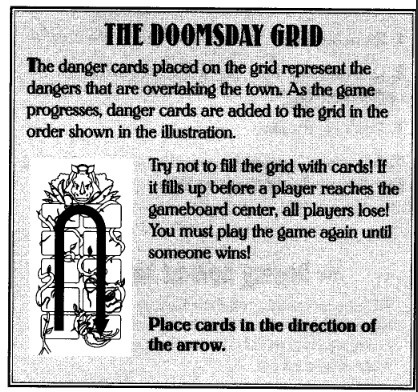 That the most badass part of this whole game and makes everything else worth it. If the Doomsday Grid fills up with failed Danger cards, all players lose. Sounds awfully familiar to another Doom Track I know…. 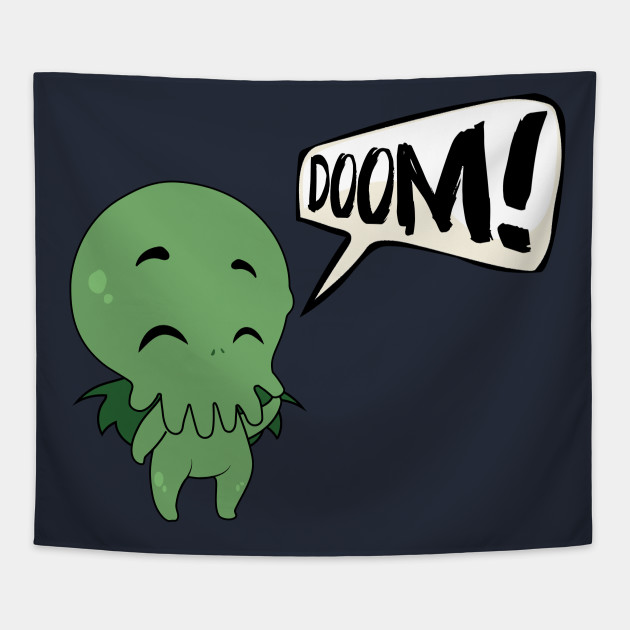 You heard it here first: Jumanji did it before Cthulhu did.

The first player to reach the center space and shout “JUMANJI!” wins the game.

There’s a fair amount to this game, mechanically speaking. The rules are 6 pages with lots of text and only a couple of diagrams. But you know what this game doesn’t have a fair amount of? Anything resembling player choice. It’s TOTALLY random! The only choices you really get at all are where to move the rhino and how fast you want to roll during any Danger cards.

The only saving grace this game has was probably by accident. You can choose to just not roll during Danger sequences, forcing that player to fail and move backwards, but moving yourself closer to everyone losing by doing so. That’s actually a pretty awesome idea, albeit very poorly implemented within this game.

Overall, if you’re a fan of the movie, it’s a fun 20 minutes. It’ll hit you right in the ol’ nostalgia. Otherwise, skip over this one and go watch the movie instead and become a fan.

If you could get stuck in any board game, what would it be?
For the first time ever, I vote Candy Land.