Starfinder is Paizo’s sleeper hit sci-fantasy RPG, which has steadily been carving out a niche for itself full of aliens, heroes, and magical power armor and laser-guided rocket launchers of flame. But if there’s one thing Paizo loves, it’s giving you ways to upgrade your characters. And that’s one area where Starfinder has been lagging behind a little–not so any more with the upcoming Starfinder Character Operations Manual up for pre-order right now.

Satisfy your adventuring in space cravings with many new options: new heritages, new training regimens, and most of all, three new character classes that let you challenge entropy itself. We’re on some Destiny 2 type lore here folks, so let’s go ahead and dive right on in. 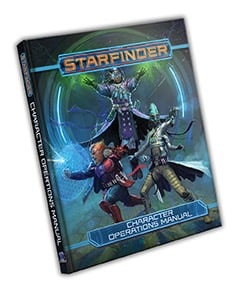 The Starfinder galaxy is an expansive and diverse collection of eclectic planets, strange creatures, myriad cultures, and ancient traditions! Characters can draw from far more backgrounds, heritages, and training regimens than can possibly be contained in just one core book. The Starfinder Character Operations Manual expands the universe of what is possible for characters of any class or race, providing new choices at every stage of character creation and advancement. Whether you are a veteran or new to the game, there’s something here for you! Inside this book, you’ll find the following:

The Character Operations Manual is up for pre-order now, and due to release in November. Happy Adventuring!