Ranking The Warcry Warbands For Age of Sigmar

The Warbands from Warcry are fully a part of the Slaves to Darkness army in Age of Sigmar – but are they any good? Let’s take a closer look a figure out who’s the best!

Games Workshop has done a great job of integrating the warbands from Warcry into the Slaves to Darkness army. If you have any of the warbands from Warcry you can field them in your army for around 70 points per 8-10 models depending on your chosen warband. However, not all the Warbands are created equally. Today, we’re going to take a closer look at the rules for each one and then see how they stack-up. Here’s the thing – you can probably make them work in a list as long as you either build around them or just run them as a minimum sized point-fill unit. But what if you want to run them in even bigger blocks? Let’s crunch some numbers!

First up, we’re just going to take a look at each warband’s rules. This is not their ranking. This is just so we can all be on the same page. You can download all these rules from their respective product page on GW’s website. 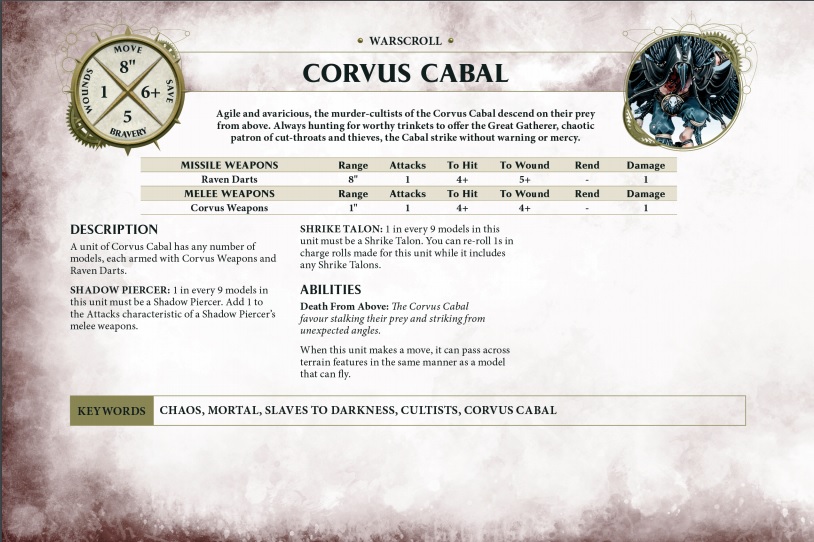 The Corvus Cabal has ranged attacks with an 8″ range and they have pseudo fly when they move. They don’t have great armor and a Bravery of 5. They are 4+/4+ in close combat as well. They are pretty fast however and that could come in handy as a harasser unit. 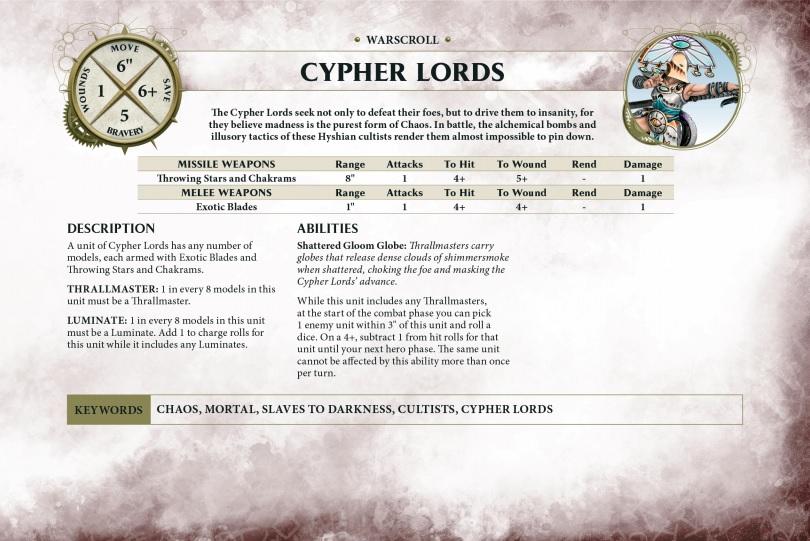 The Cypher Lords have ranged attacks up to 8″, and pretty much mirror the Corvus Cabal’s stats – with a notable exception in the speed department. However, their special shtick is that they can debuff an enemy unit’s hit roll on a 4+. With enough of them around, that could be a pain for some armies to deal with. 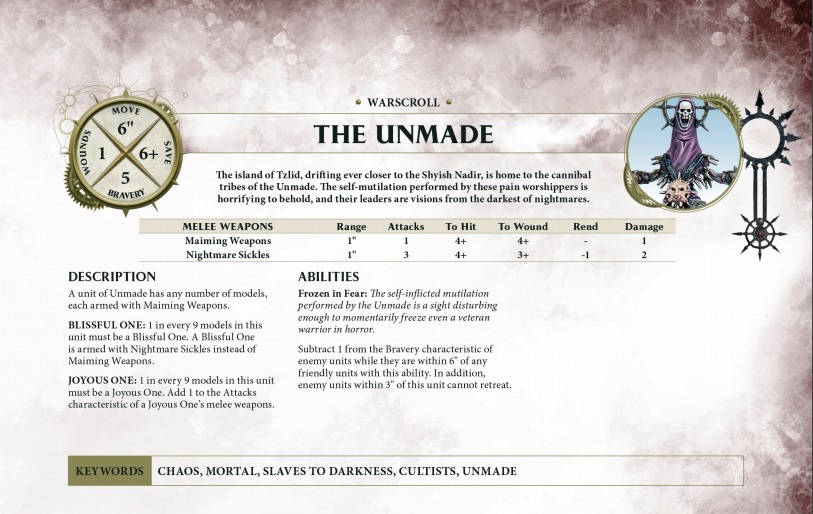 Other than being the winners of the freakiest models awards, the Unmade also have some other skills. They don’t have a ranged attack but they do have more attacks in melee and the Blissful One does have a fair amount of hitting power. Still move 6″ with a 6+ save and 5 Bravery. Their special ability is that they do two things: First they cause -1 Bravery to enemy units within 6″. Not bad. But their second ability forces enemy units within 3″ to stay and fight as they can’t retreat. That can be powerful for setting up units to take charges or stick around for another round of combat. 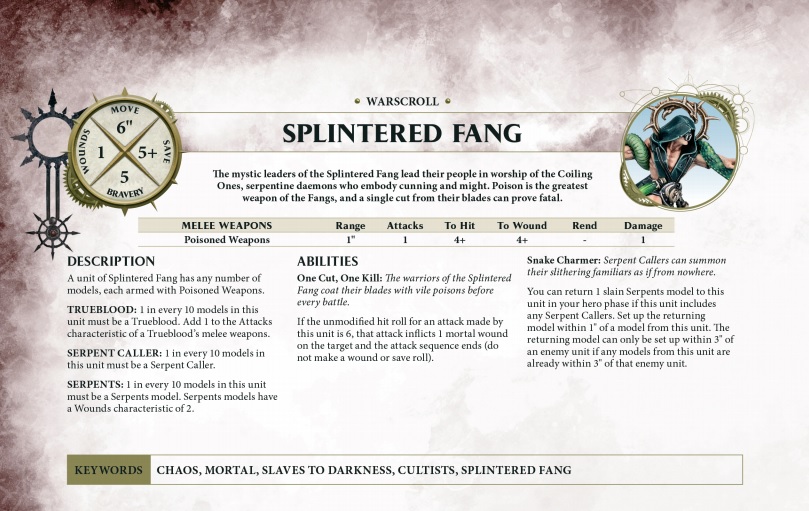 The Splintered Fang is similar in stats to the other warbands above, only they have a 5+ save which is marginally better. They also only have melee attacks but a few more special unit models as well that add attacks or have 2 wounds each. Their big advantage is that they cause mortal wounds on 6s to hit and have a 4+/4+ melee profile. The Serpent Caller can also return 1 slain Serpent model to unit every hero phase, and those are the pesky 2 wound models. Mortal wounds and model recursion, a nasty combo. 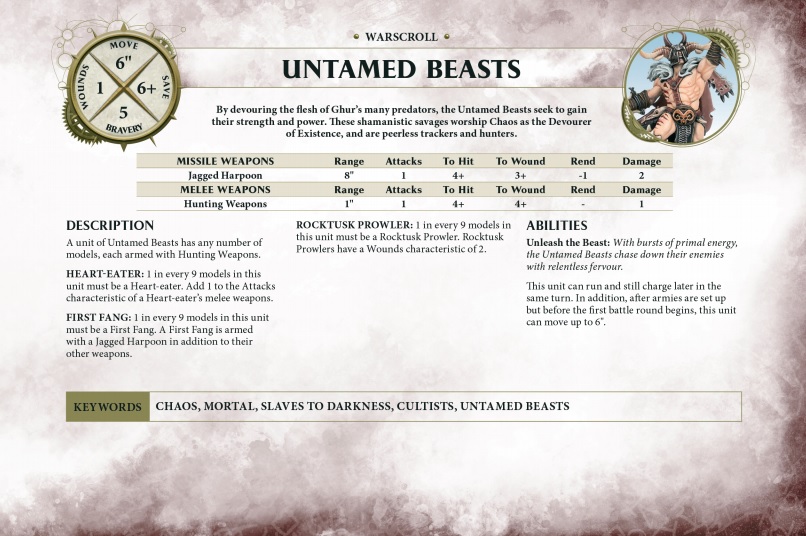 The Untamed Beasts have that standard stat pattern of 6″ move, 6″ armor, 5 Bravery and 1 wound each. However, they have a single model with a decent missile weapon attack at 8″ range. Plus the Rocktusk Prowler has 2 wounds. Their melee weapons are similar to everyone else with a  4+/4+. Where they stand out is their ability which allows them to run and charge in the same turn. Plus they can move 6″ before the first battle round. 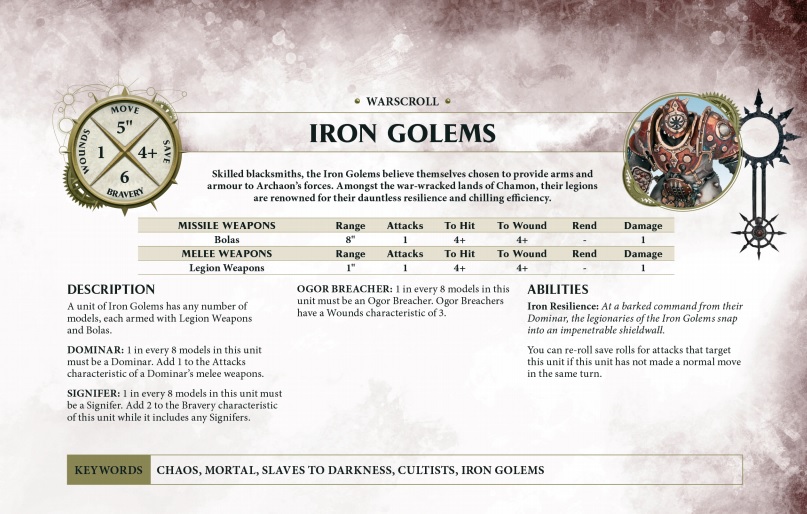 Iron Golems are the heaviest armored of the lot with a 4+ save. They all have ranged attacks that match their melee attacks of 4+/4+ so that will be easy to keep straight. They also have 6 Bravery or 8 when the Signifer is still around making them the bravest so far. Plus they have an Ogor Breacher with 3 wounds! And their ability allows them to re-roll saves if they have not made a normal move this turn. 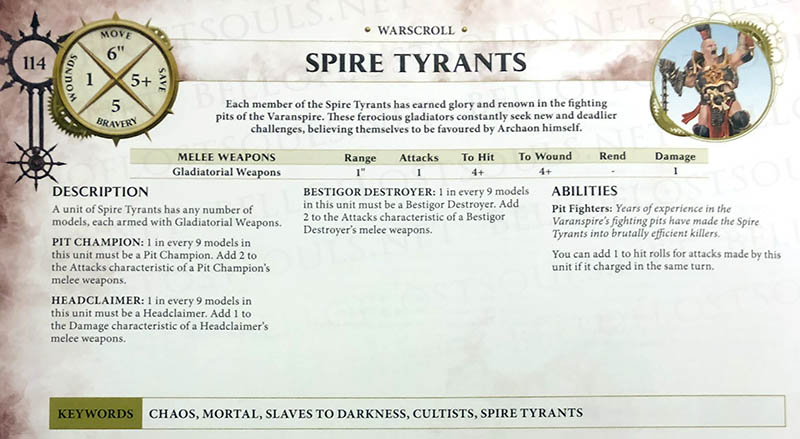 And finally we have the Spire Tyrants. Statwise, they differ from the rest of the pack with a 5+ armor save but similar stats everywhere else. They don’t have ranged attacks and also have the standard 4+/4+ melee weapons – although various models in the unit do get more attacks or more damage. Their ability allows them to get +1 to hit rolls if they charged in the same turn however.

One thing to note about these units across the board: They aren’t Battleline. So whatever list you’re running, you need to bring something else to fill that role. Where does that leave these warbands? Well, to me, that means they better do something special in terms of taking objectives or causing problems for my enemies and they need to do something different enough that it’s worth taking them alongside my army. Again, you can build around these warbands – but I think you’re going the wrong direction if you do that. Use these warbands to plug a hole your army list might have. They are relatively cheap points-wise, too. So spend those points on a combat role for these units that makes them worth their sacrifice.

Let’s be honest – none of them hit particularly hard unless you get really lucky with the Splintered Fang’s mortal wounds. The Iron Golem have the best armor save – but Chaos Warriors would probably be a better option if you want durable units. Plus none of them are particularly “sticky” in combat either meaning they probably won’t survive more than a round or two vs any “real” unit without help or numbers on their side. 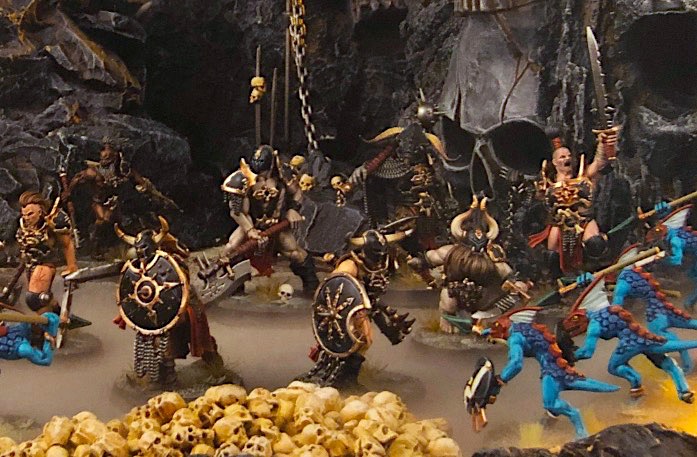 Based on those observations, I think the real value of taking these units is what extra do they bring to the table. So let’s rank them!

They just aren’t different enough from the rest of the options and their ability doesn’t make them “better” than taking a Chaos Warriors or Marauders. They don’t have any “tricks” other than the +1 to hit if they charged.

Their Fly and speed are nice and at least they all have ranged attacks. But they also don’t have anything super special about them to truly mess with the enemy army. It’s a good harrassment unit, but that’s about it.

Relatively slow but heavily armored is not exactly earth shattering. If they could have the re-roll to their armor save all the time they’d be much stronger, but you basically park them somewhere and hope you get in a fight for their ability to work.

At least they can cause mortal wounds on 6s to hit. Plus their Serpents keep coming back. They don’t have great armor but at least it’s a 5+ and comparatively, that’s not the worst of the lot.

That -1 to hit debuff they cause has some potential. Plus, it’s not a magic spell so you can have multiple units of them tossing that around. This is one option I could see running 2-3 units of instead of one big block to cause some problems for my enemy.

Their ability to lock an enemy into position for a turn is pretty good. They will have problems surviving past that but forcing your opponent to deal with them means they are a valid speed-bump in your lists. For that alone they are really useful.

I’m honestly kind of surprised myself. But they get a pre-game move which means they can threaten objectives quickly. Plus that whole run and charge means they can really force your opponent to rethink their own movement strategy. They won’t last long, but if they get to the objective first, claim it, and then force your opponent to account for their speed, I think they’ve done their job.

That’s our list – how would you rank the Warcry Warbands?

Warhammer 40K's Most Amazing Models... Rules, Not so Much 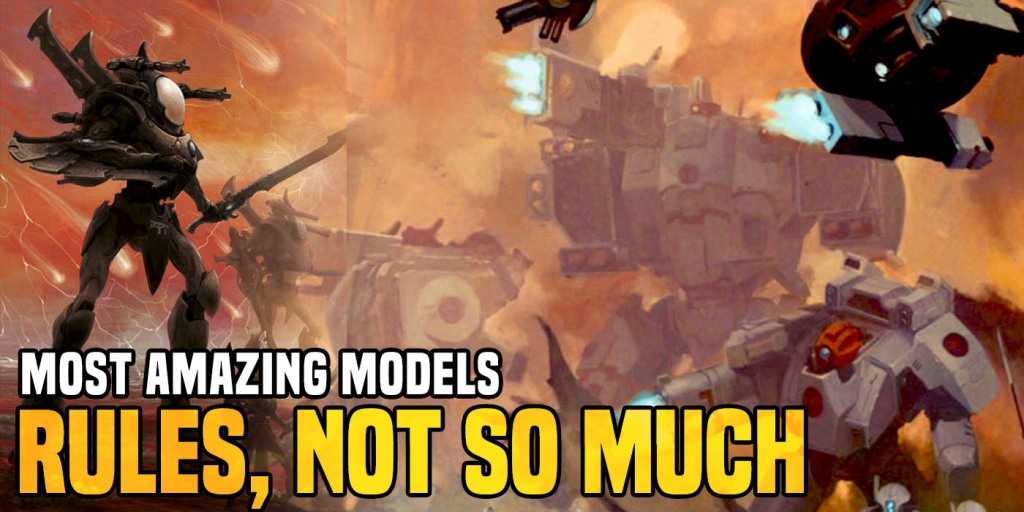