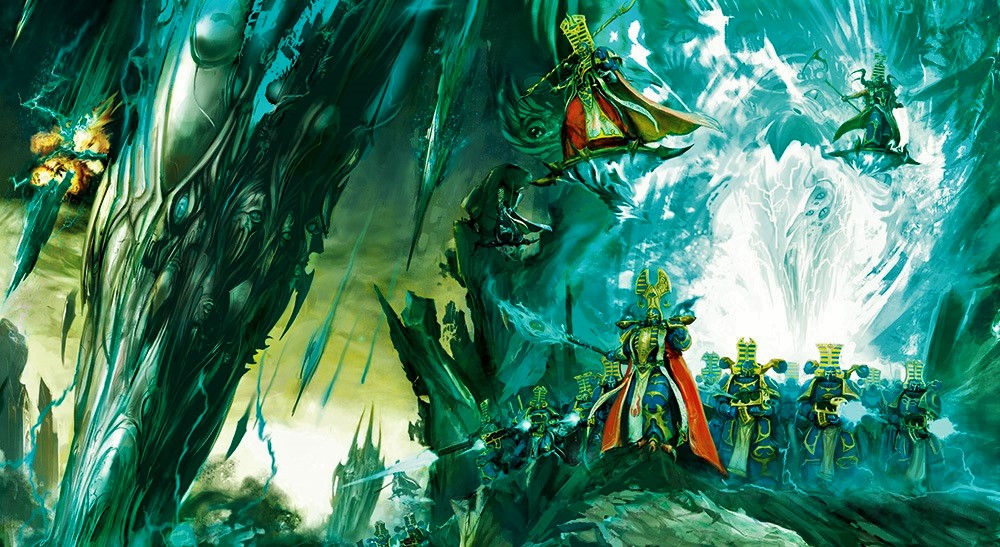 It’s time to take a first look at the new rules for the Thousand Sons in Ritual of the Damned!

The Thousand Sons have been hard at work recruiting wayward psykers from all over the Imperium. Why have they been doing this and what’s the purpose of all these psychic messages? Well, if the title of the book Ritual of the Damned has any clues…it’s not going to be good for the folks involved. Today, we’re getting a look at what GW has planned for the Sons of Magnus the Red. And their new rules might be just what the Cyclops ordered.

The first big updated is that the Thousand Sons are getting Nine new Cults – these will be extra abilities you can use when you dedicated a Detachment to them. They will include additional Psychic Powers, Warlord Traits, and Relics – which is something we’re coming to expect for all the army updates via Psychic Awakening. First up, we have a look at the Cult of Time: 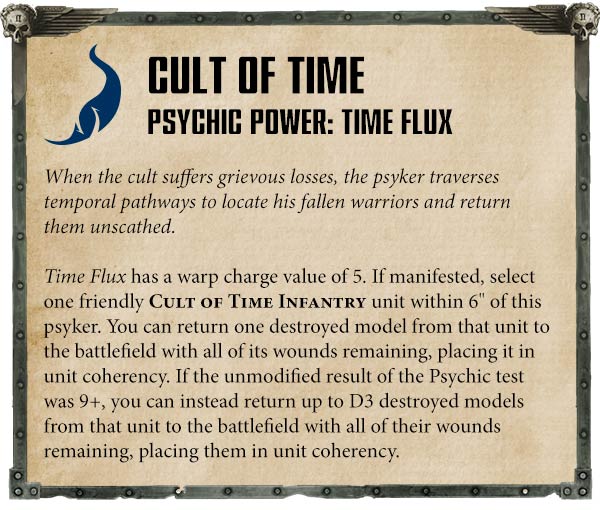 This new Psychic Power allows you to regen fallen Cult of Tim Infantry units back with all their wounds. And if you successfully cast this one with a 9+, you’ll get back D3 models instead! I can easily see this getting used on Scarab Terminators to keep them in the game and fighting. Heck, even on standard Rubric Marines it’s still useful. 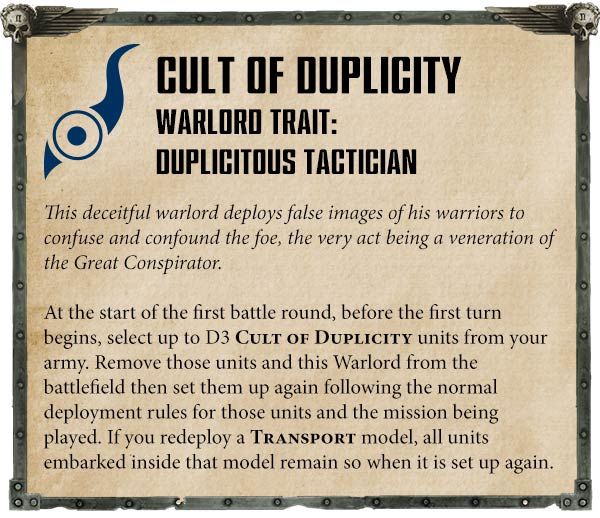 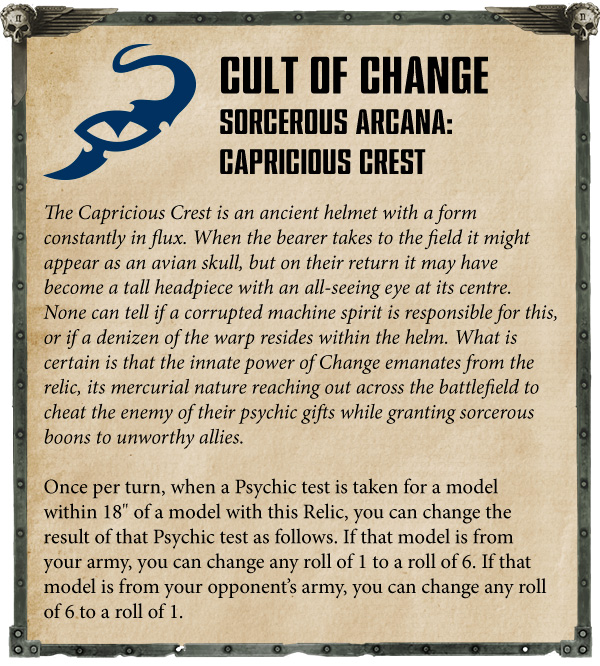 Here we have the Cult of Change’s Artifact – the Capricious Crest. This thing is kinda mean! For friendly units taking a Psychic Test, it can change a roll of a 1 into a 6 and for enemies, it does the opposite. That can really save your bacon!

Now, if you’re unsure about dedicating yourself to a specific cult, you can still play your Thousand Sons and get a benefit from this book. Here’s a look at one of the many new Stratagems you’ll gain access to: 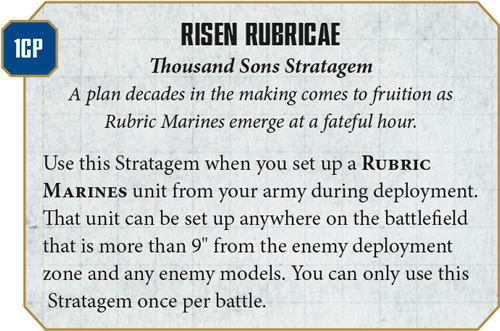 Hey, how about a unit of Rubric Marines in your opponent’s face for 1 CP? What’s funny is there isn’t a restriction on what size this unit can be. As far as I can remember, Rubrics can be taken in squads of 20. That’s a lot of points. But this takes place during the deployment – not the first turn. So if you’re going first, and can also move this unit in to Warpflamer range. And you can replace ANY Inferno Boltgun with a Warpflamer. Is 19D6 auto hitting Str 4 AP -2 shots good? Gee, let me think about it. 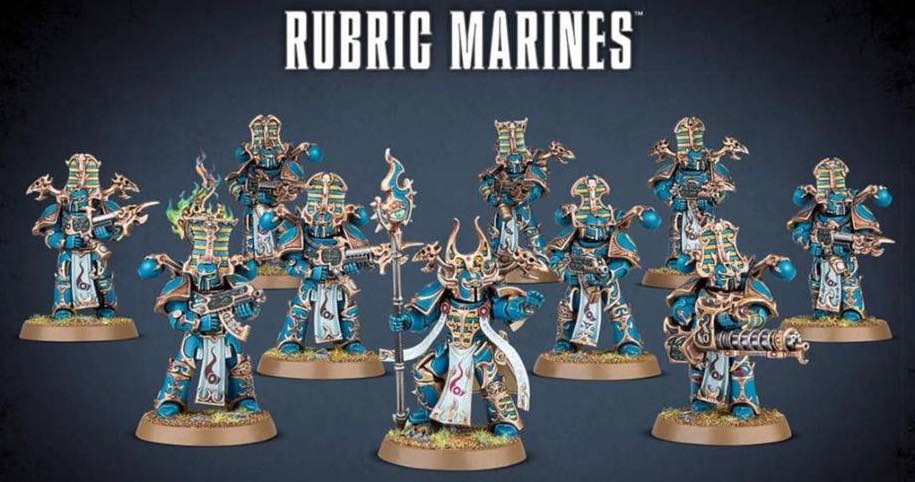 Ritual of the Damned goes up for Pre-order this Saturday. Are you ready for the Thousand Sons to turn all to dust? Or is it ash? With all those Warpflamers, it’s probably ash, right? 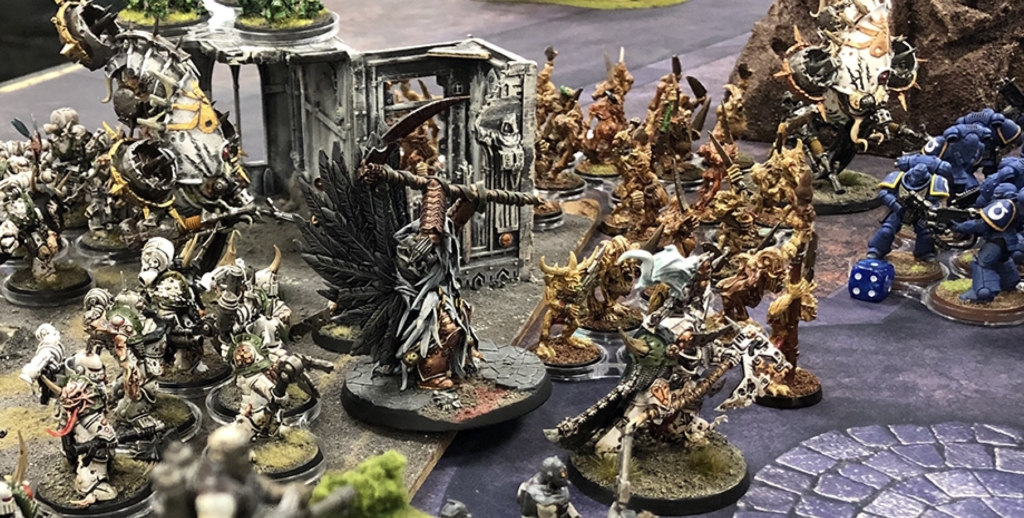