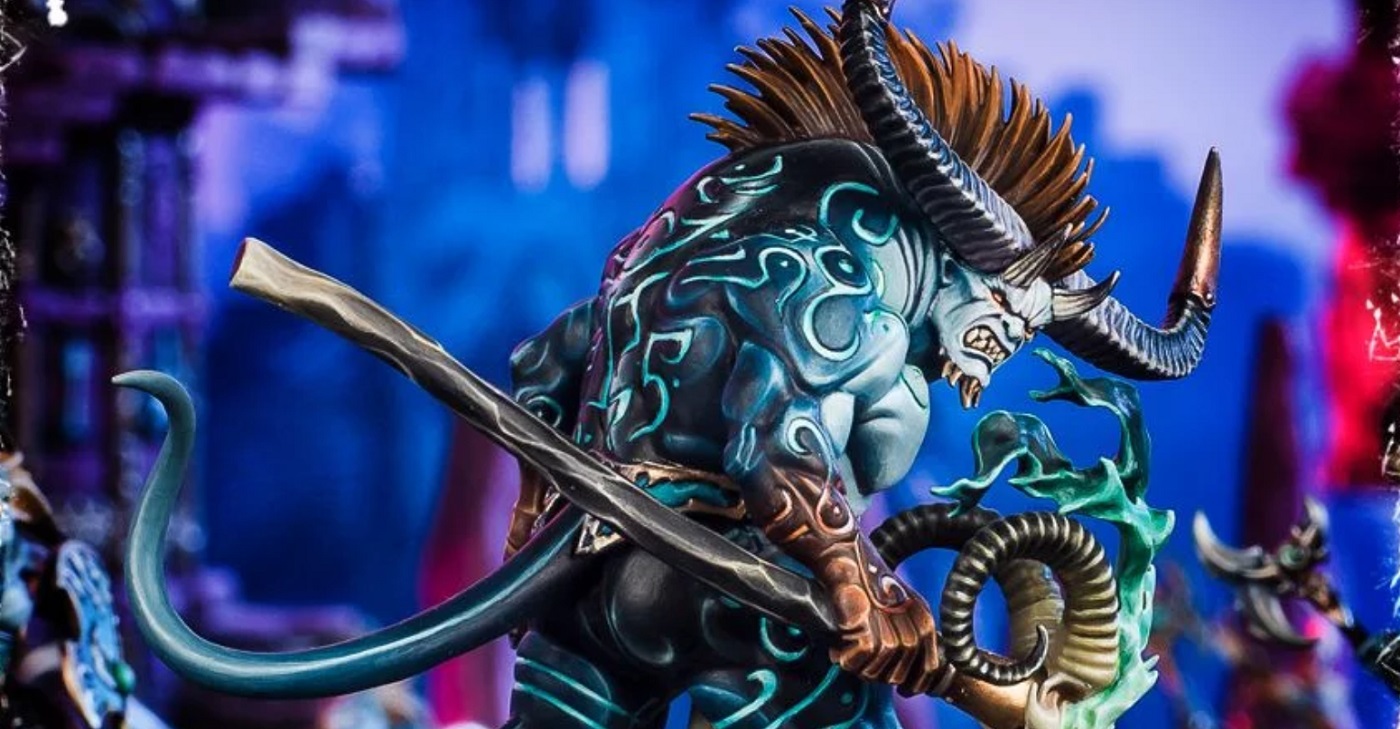 The Ogroid Thaumaturge is a big blue bull-rushing wizard who will stomp across the battlefield leaving magical terror wherever they go.

Last weekend, I wrote up the gladiatorial Ogroid Myrmidon, and mentioned his magical cousin the Thamaturge. As an avid follower of Tzeentch and lover of all things arcane, I felt it only right that I should give the big blue guy a write up of his own. So here’s my thoughts on the Ogroid Thamaturge, and some strategies for using him on the tabletop. 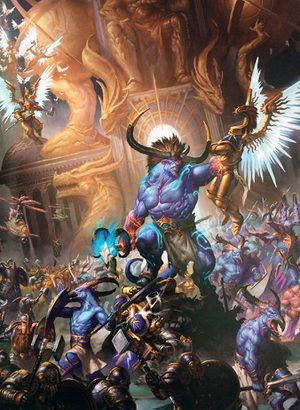 The Ogroid is an absolute unit on the battlefield, and carries a huge threat bubble wherever he goes. He has a 6” move, 8 Wounds, and 8 Bravery just like his Myrmidon counterpart, but only a 5+ Save, so he isn’t quite as durable, but he more than makes up for that with punch. Even before he fights, whenever he charges, you get to pick a unit within 1” and roll a d6, dishing out d3 mortal wounds on a 2+. 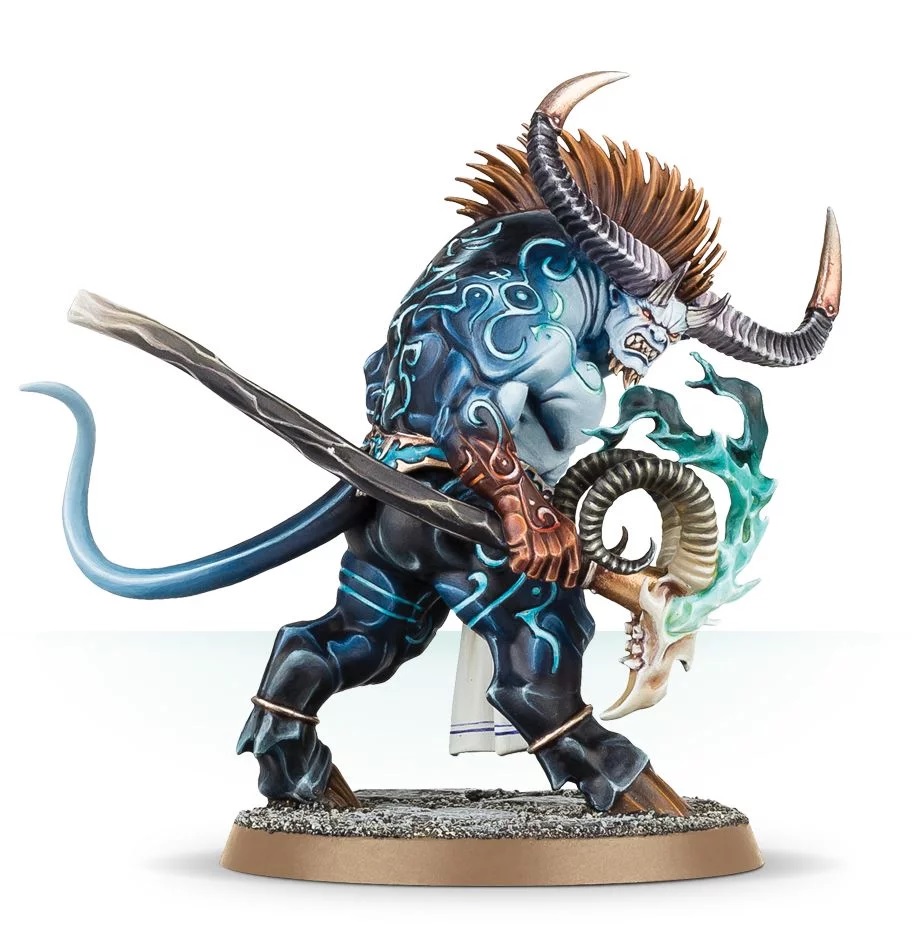 After he’s softened his target up, he gets a staggering number of attacks, even more than the Myrmidon! First, he can gore his enemies with his Great Horns, giving him 2 attacks that hit and wound on a 3+ with a Rend of -2 and 3 damage a piece. Next, he gets to crack them with his skull-headed Thamaturge Staff, giving him 3 attacks which also hit and wound on a 3+, but has a Rend of -1 and d3 damage a piece. 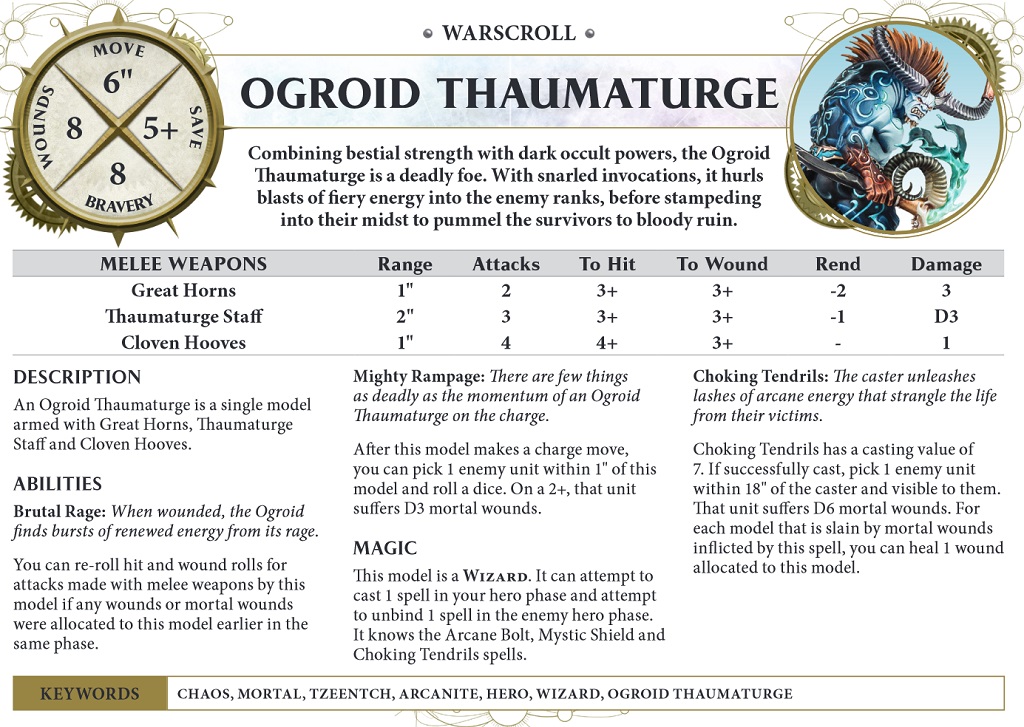 Finally, should anything still be standing after that onslaught, he can stomp them with his Cloven Hooves, giving him 4 attacks that hit on 4+, wound on 3+, and deal 1 damage a piece with no Rend. To add to his terror even more, should he suffer any wounds in the combat phase, he goes berserk, and for the rest of that phase he gets to re-roll all hit and wound rolls. For a Tzeentch hero, he is incredible punchy.

Of course, the Ogroid wouldn’t be a hero of Tzeentch if he wasn’t also a bit of a mage (I know the Fatemaster isn’t but he doesn’t count). The Thamaturge can cast and unbind 1 spell, and comes with a pretty snazzy signature called Choking Tendrils. Casting on a 7+, it allows you to pick one enemy unit with 18” and deal d6 mortal wounds. Then, for every model slain by the spell, the Thamaturge gets to heal 1 wound.

As powerful as that spell is, especially as the model gets below half wounds, you should also consider outfitting him with Infusion Arcanum to make him a living Fireball. It casts on a 5+, and if successful adds 1 to both hit and wound rolls, meaning most of his attacks hit and all of them wound on a 2+. Make sure he isn’t the first to attack in the combat phase and activate his Brutal Rage ability and you’ll get to re-roll any of your 1s, meaning he’s almost guaranteed to deal his max damage.

Do you bring this big blue Terror in your Tzeentch armies?