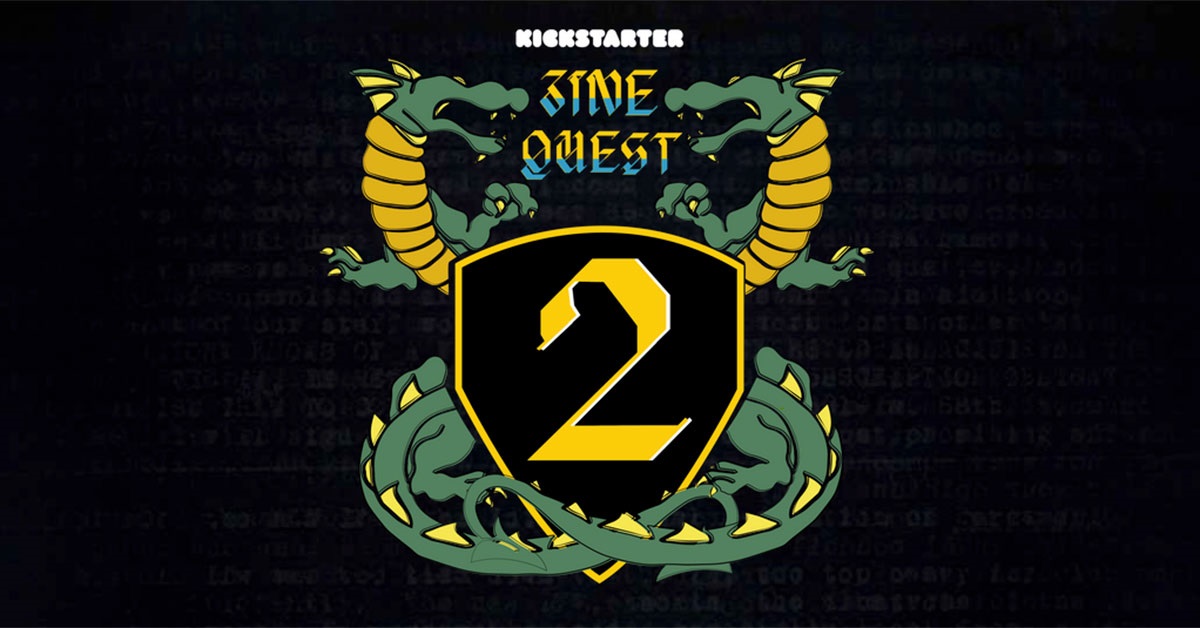 Kickstarter’s ZineQuest might be coming to a close, but what a strong finish. From getting to the MCR concert on time, to going on a journey, these games rule.

It’s the last week of ZineQuest, Kickstarter’s month-long exploration of weird and wonderful tabletop RPG zines. And it’s been the source of some amazing games that explore what exactly is good fodder for a roleplaying game (basically everything). From games about escaping a deadly trap, to building a map with your friends, ZineQuest has a great variety. Here are eight to close out your week with.

Live out a drama of Shakespearean proportions in this roleplaying game that adapts the Forged in the Dark rules to portray an exiled claimant to a throne, who must make allies as they make their uncertain climb up the ladder to royalty. With each success holding the potential for new complications, there’s a lot of dramatic potential here. So grab your crown–if you can.

It is the year 247 of the Aonaicthe Empire, a centralized dominion that brought three warring kingdoms into unsteady accord. The kingdoms assented (or succumbed) to Imperial rule only in the face of an existential threat: a curse fell upon the kingdoms and the souls of those who die do not remain at rest. Monstrous wraiths plague the Empire, bringing suffering and destruction. Nearly three hundred years of coping with this crisis has changed life in the Empire completely. Fear of wraiths has calcified the already entrenched feudal structure.

The three largest houses style themselves kings and queens under the Empress: the ancient house Lolaire, the wealthy house Darach, and the pious house Nathair. Every other house has sworn fealty to these three. The three kingdoms have a duty to maintain peace and control the unquiet dead within their own borders. Peace is maintained by the Empress’s might, and by the fear that open battle would doom the kingdoms to a pandemic of wraiths. Without the ability to mass armies in the field, ambitious nobles must turn to subtler methods. In this context, the Claimant seeks to reclaim their throne from their treacherous uncle. They must face rival houses, members of their own family, and spirits of the unquiet dead in a daring ascent to power.

Alone On A Journey

Alone on a Journey is a zine full of games inspired by Takuma Okada’s amazing No Man’s Sky-esque game of exploring a vibrant galaxy with no one else there to share it. They set out to capture the feeling of playing the game late at night, and it definitely comes through. If you’re looking for an incredible Solo RPG then you should definitely check this out.

Alone Among the Stars is a solo adventuring game about exploring strange and fantastic planets and experiencing wondrous sights. I wrote it in the summer of 2018 while I was playing a lot of No Man’s Sky really late at night. If you’d like to check it out before backing the zine, it’s available for PWYW on my Itch.io page here.

Alone in the Ancient City was the first hack of AAtS that I wrote. It’s about wandering through an old city with new eyes, and was inspired by trips to cities such as Venice and Montreal. If you’d like to check it out before backing this zine you can find the plaintext version on my Itch.io page here.

Alone Among the Twisting Trees is a new game I’m writing for inclusion in this zine! It’s about getting lost in a mysterious forest and the strange artifacts that you find inside. It was originally conceived through playstorming with Quinn Vega and Avi Margolis as an adaptation of another game I wrote, Alone on the Rocky Beach (not included in this zine).

Keeping the Sci-Fi RPG train rolling, Kozmik Objects & Entities is a system-neutral series of encounters of interest meant to be used with whatever system you’re playing. If you’re looking for prompts and/or cool inspiration, this is a great option.

Kozmik Objects & Entities is a zine (that means a small book) featuring places and beings that adventurers can encounter in Deep Space! A garden asteroid, an abandoned space station, a black hole trading port, a sentient nebula, feuding space cults, and more! This system-neutral zine is meant to be used with the space-faring tabletop RPG of your choice. Games like ITLOAGS, Troika, Offworlders, Mothership, Solar Blades & Cosmic Spells, and Space Goblins.

The zine will be a square booklet with 24-32 pages. It will detail at least 6 entries that each function as a tabletop role-playing dungeon. Stretch goals will allow for up to 10 entries. Entries are designed to stand on their own and be used for 1-3 session adventures or strung together for an extended space-faring campaign!

You Got A Job In The Garbage Barge

You got a job, on a garbage barge.

The Garbage Barge has been slogging up and down the coast for years, putting into port and accepting unwanted things in exchange for gas to keep the tugboats running. It is a towering, leaking wreck, and it’s your home. You are a wizard or a pirate radio operator or a raccoon or a barge worker, or maybe you raise goats in the listing high rise that’s been dumped on the stern. Things grow in the trash. Chemicals are leaching out of rusted barrels, growing legs, and setting off to seek their fortune. Beetles tell you their life stories, raccoons steal your pens. Something in a diving suit disappears into oil-slick bilge water in search of baroque pearls. A forest of rebar sings in the salt wind. Out past the gas lake, there’s a town on fire. It’s been like that as long as anyone can remember. They say that no matter how far into the trash you go, it keeps going.

Most towns will pay just to get the barge to leave. Disposing of objects and people that are too dangerous, embarrassing, or on fire is a bonus. The barge is always hiring, and it’s a great way to get out of town quick. It’s not a great way to make money, but you might find something you never realized you were missing.

YOU GOT A JOB ON THE GARBAGE BARGE is a 30-ish page setting and adventure zine, ready to play with any rules-light osr style system. It includes maps, monsters, 100 kinds of trash and lots of drawings of raccoons.

i’m sorry did you say street magic is a citybuilding storygame, where players collaboratively explore a city that they create together. Each turn, a player adds to the city either a Neighborhood, a Landmark, or a Resident, nesting cards inside of each other to showcase and spotlight the relationship between the city’s inhabitants, and the places where they live. These cards are then complicated by Events that take place in the city: festivals, elections, ceremonies, natural disasters, mysteries, or discoveries that change the flow and focus of play. As you play cards, you unearth the city’s true names — quirks and qualities that make this place wholly, intrinsically unique.

Draculola, a little vampire girl and your friend, wants to make her home, the creepy realm of Zitterstein, a better place. You can help.

You’re also a child in that craggy, forested land. Naturally, you’re a monster, too (probably!). As part of a gang of little creatures, you get up to mischief and adventure all over Zitterstein, sometimes during the day (naughty!). You scare and thwart mean people and monsters; set up elaborate pranks; solve mysteries; and explore hidden places such as fog-shrouded vales and Castle Zitterstein’s endless dungeons.

Zitterstein is changing. Draculola is tired of the monsters’ traditions of scaring and hurting people. She doesn’t want to spend her unlife being nasty to nonvampires and stocking her castle’s catacombs with beasts as her parents do. With your help, she has plans to bring more cheer to gloomy old Zitterstein. Her parents don’t approve.

“Oh No I’m Late to the MCR Concert & I Have an Extra Ticket” is a TTRPG where the goal is to navigate New Jersey alleys in time for an MCR concert. The catch is that in every alley you’ll encounter a new cryptid that you can either defeat or romance into coming with you to the concert. There’s seven alleys to go through to reach the concert and there will be twelve cryptids which get randomly assigned each game (by dice roll by the DM), which means you can have a slightly different experience each time and can even play a few times before you get to meet all the cryptids! There’s going to be romance mechanics and battle mechanics, both with their own stats. Before the game starts, you get to choose a Cool Goth weapon that gives you certain stat advantages and certain initiative rolls can also give you neat boosts! You can play this with just yourself and a DM or you can play with multiple friends and compete over love interests and race to get to the concert first!

Settle in for a warm meal and warmer memories. These are the tools you need to carve your own fate in this forest.

Winter Harvest is a small tabletop role-playing game set in a small world. Players will take on the role of woodland animals who are protecting each other and their shared home over the four seasons by drawing on the power of community and memories passed on through oral history. In the final Winter session, players share a Midwinter feast that occurs both in-game and in real life! The table will tell the story of their year together, turning successes and failures into part of the world’s lore for future generations to call upon.