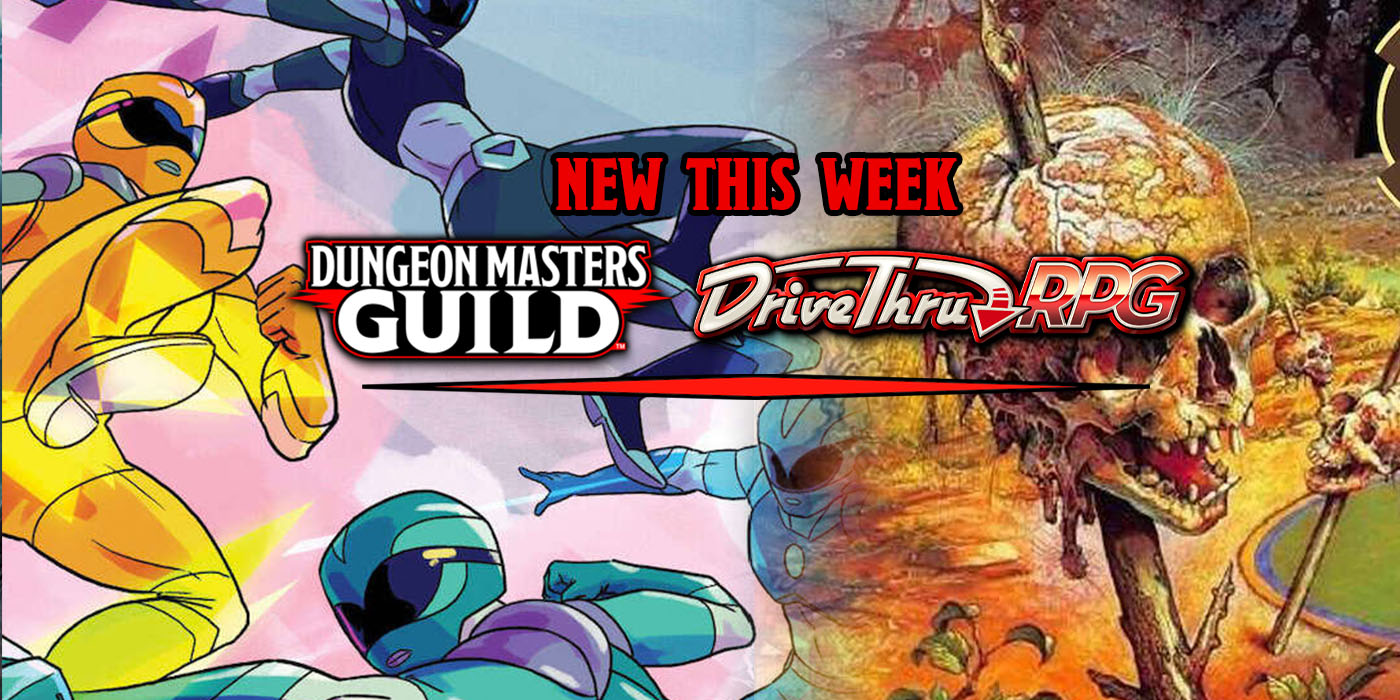 Gather ’round gamers and let’s take a look at some of the cool new titles out right now on DriveThruRPG and their WotC partnered sister-site, the DM’s Guild. This week sees the advent of spooky ghosts and goblins, instant adventures, and a sentai RPG that’s all about saving the world with over the top special moves and color-coded suits. Check ’em out! 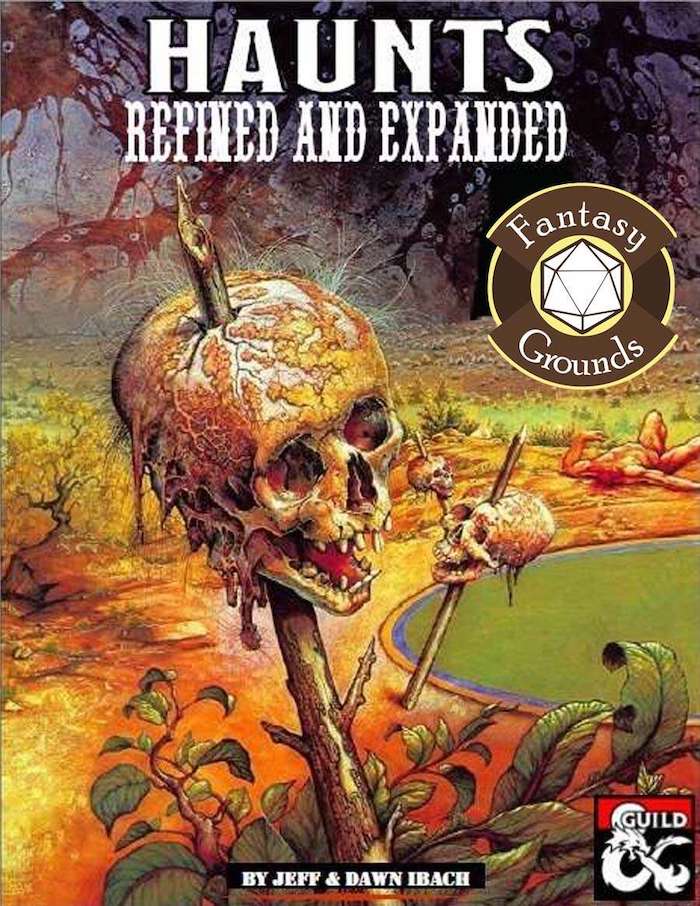 “Want to invoke fear or horror in your characters but not with a hack-n-slash fight with a ghost, specter or revenant? Want a way to confound and spook your players with mood and roleplaying and not just mindless combat?

This new edition has a few revised numbers based on feedback, now with 16 Complete Haunts (double of the original document) and a more extensive FAQ section!

Haunts provides descriptions for many bizarre supernatural “manifestations” that have left their mark on an area like an ‘echo’ of a spirit’s memories or terrible misfortune when alive. There are no new rules to learn because the haunt’s effects when interacting with the living emulate from spells like mage hand, sleep or charm person!

Help yourself to a great new way to challenge your players with haunts like the Seducer, the Judge, the Jealous Guardian or the Mystic Protector. Once you see how they work making your own is easy!

If you’re looking for a way to punch up your game’s spooky factor, look no further than Haunts. Using the already existing structure of 5E, you will be able to incorporate the feeling of horror into your game, turning any session into a haunted encounter. 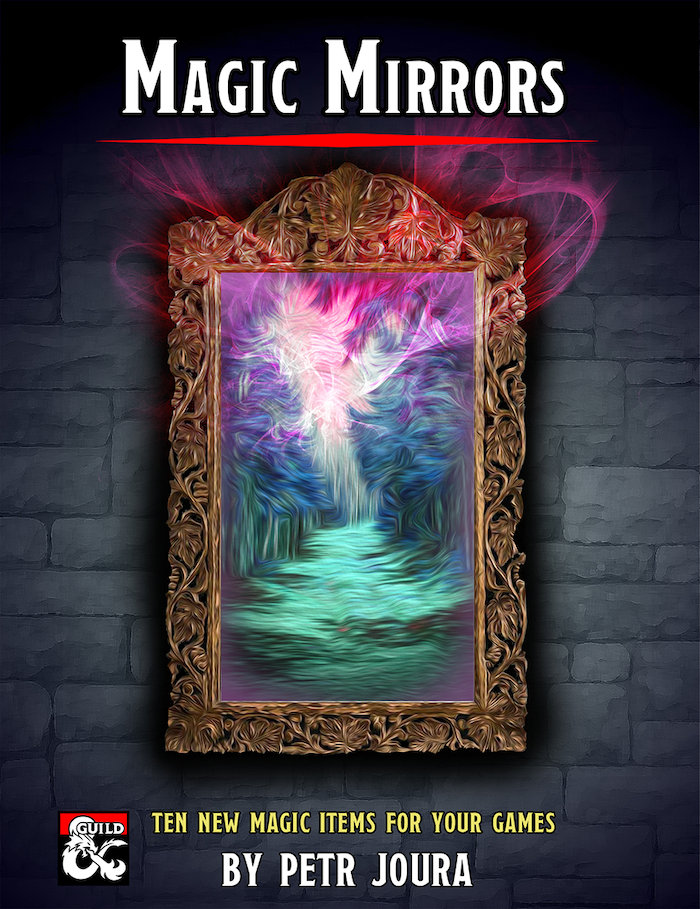 “Mirrors have an immense ability to fascinate us. They appear to hold entire worlds inside them, but close inspection reveals nothing more than a sheet of glass and metal. The worlds inside are illusions-  they do not exist. We know this, but still we stare.

For we see something even more interesting than illusory worlds in mirrors. We see ourselves. Mirrors provide the only real way to visualize the concept of self. In a way they help us form our very identities. But once again what we see are only illusions. For it is not ourselves we see in mirrors but the mirror’s version of us. A freckle on our right cheek now appears on our left. Scars suddenly switch sides. None of it is real, yet it forms the basis for our identity.

Although we think little of them, mirrors hold great power over us.

Now imagine what else they could do, with just a little magic.

This booklet details ten mirrors whose powers go well beyond the norm, and all the information you need to include them in your Dungeons & Dragons 5th Edition adventures.

It details their look, their feel and their powers; how they are crafted (for players), and possible encounters or adventures that can be built around them (for Dungeon Masters).

May you never again underestimate the power of mirrors.”

Mirrors feel like they should hold magic. Whether they’re telling the queen that she’s not the fairest in the land (and really should they be judging her like that?) or helping Keanu Reeves escape from computer simulations, mirrors are powerful. With this supplement you’ll be able to add that feeling to your D&D campaign. Whether you’re a DM looking to add a new magic aspect to your world, or a player with a mysterious new item, Magic Mirrors promises to add a fun, dreamy feeling to your campaign. 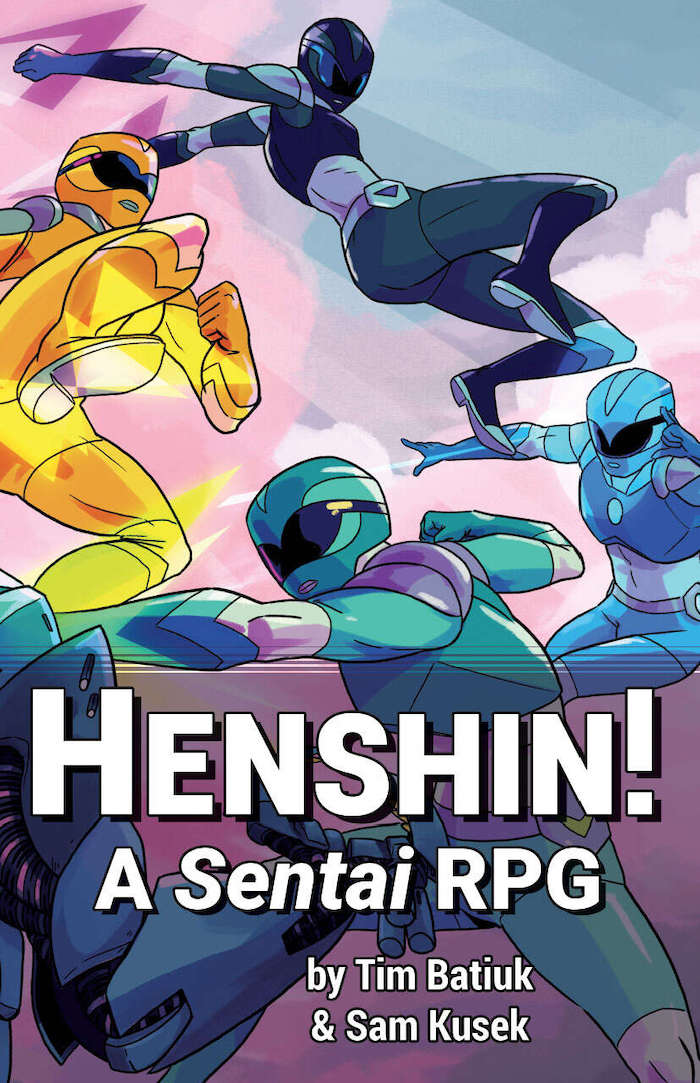 “Henshin! A Sentai RPG is a storytelling tabletop game about young heroes with transformative powers who battle both monsters and personal problems. It borrows from a Japanese superhero culture of color-coded masked teams, giant robots, and over-the-top special effects. Anyone can tell fun, collaborative stories in Henshin!, regardless of familiarity with the tropes, and the game showcases a diversity of settings and characters for every player.

This book includes instructions and actual play examples for everything needed to start playing Henshin! right away. Also included are the eleven Color playbooks, seven ready-to-play settings, original exclusive art, and references to digital downloads. Resources and information can be found at henshingame.com. Let’s Henshin!”

Sometimes I see a tabletop system created for a specific TV trope that and wonder how I had never seen one like it before. Henshin! is one of those systems. This particular super hero genre has existed through so many incarnations and the monster of the week style of their TV shows lend themselves perfectly to a very fun trope heavy game experience. Check out Henshin! and relive your Power Rangers phase with me.

Tomb of the Phoenix 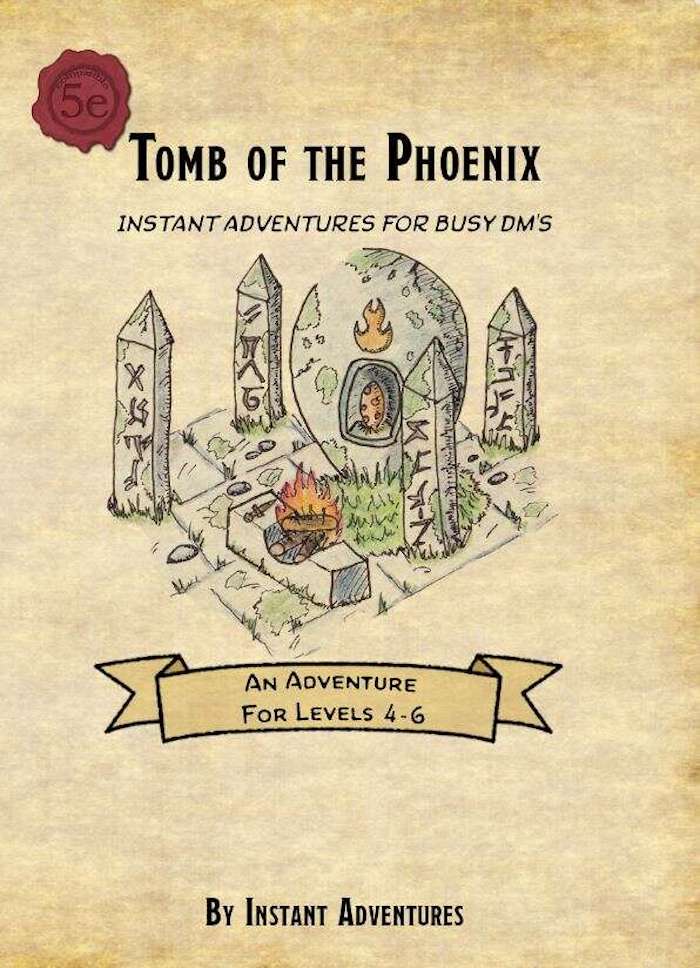 “The Tomb of the Phoenix’s underlying story is of a fire cult dedicated to guarding a great treasure, the egg of a phoenix. Their true temple is hidden away on the elemental planes. The shrine acts as a planar gate.

Tomb of the Phoenix is a drop-in adventure for your campaign or next one-shot.

Designed for a group of 4-5 players with low to mid-level characters.
Use as a standalone adventure, connect to an existing campaign, or as a random encounter in a pinch!

Tomb of the Phoenix had me at elemental planes and planar gates. This one shot module sounds like a fun, short and sweet game night and comes with maps as well as the game PDF. Plus, Tomb of the Phoenix and Volcanic Cavern are both donating all proceeds from these games to the Animal Rescue Collective. 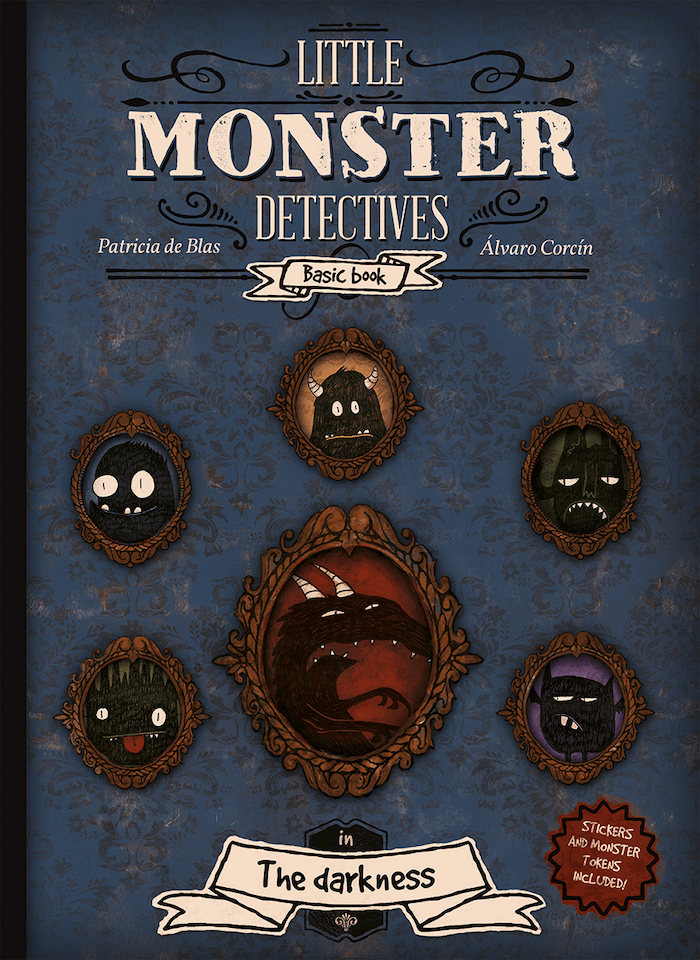 “This is no ordinary book. There are monsters inside! Yes, you got that right. Monsters exist and live with us. But don’t be afraid, they aren’t bad… at least not entirely

Have you ever noticed that you might be missing socks or that you hear strange noises in the dead of night? You aren’t absent-minded nor do the pipelines make noises. They’re the Monsters of Darkness! But don’t panic because there are brave detectives whose job is to catch them so they will stop bothering you. They are none other than the Monster Detectives.

What? Did I get that right? You want to be a detective too? Then this is your book! With Little Monster Detectives you can create a team with your friends and catch the monsters that scare you at night. Solve mysteries, get to know the Monsters of Darkness and prove how brave you are. But above all prepare to live a bunch of adventures and have a great time!

Welcome to the Monster Detectives Agency!

Little Monster Detectives is a game for children. Specifically, it’s a game to play with children. You love reading stories to your kids and you know how they like to question other aspects of the story and imagine different outcomes for the characters. They want to be involved in the story, change the ending and imagine what will happen next. Children are natural-born roleplaying gamers!

You can play Little Monster Detectives with children that are 5 or older. Of course, the game offers different rules and game mechanics to play with the youngest ones, who tend to have a short attention span and limited numeric comprehension. Older children, on the other hand, can take the role of Senior Detective (the Game Master of Little Monster Detectives) and guide their younger siblings and friends throughout the game.

This roleplaying game is mostly intended for children who are afraid of monsters that hide in houses. To help these children overcome their fears, we’ve created a game where they are the stars and they get to decide when and how they face these monsters.

Little Monster Detectives stimulates deductive thinking through the use of clues. Monsters always leave behind mischievous clues at the scene of the crime. Detectives must go there and investigate what happened. They will have to deduce which monster it is by finding clues and figure out the best way to catch the monster so it will stop causing trouble.”

Equal parts Monster Inc. and Clue Little Monster Detectives looks like a charming, child friendly way to turn tabletop gaming into a whole-family experience. The game mirrors the way children read stories and play to craft a game that allows them to become part of the story, while keeping it effortless and natural and fun.

Under a Winter’s Snow 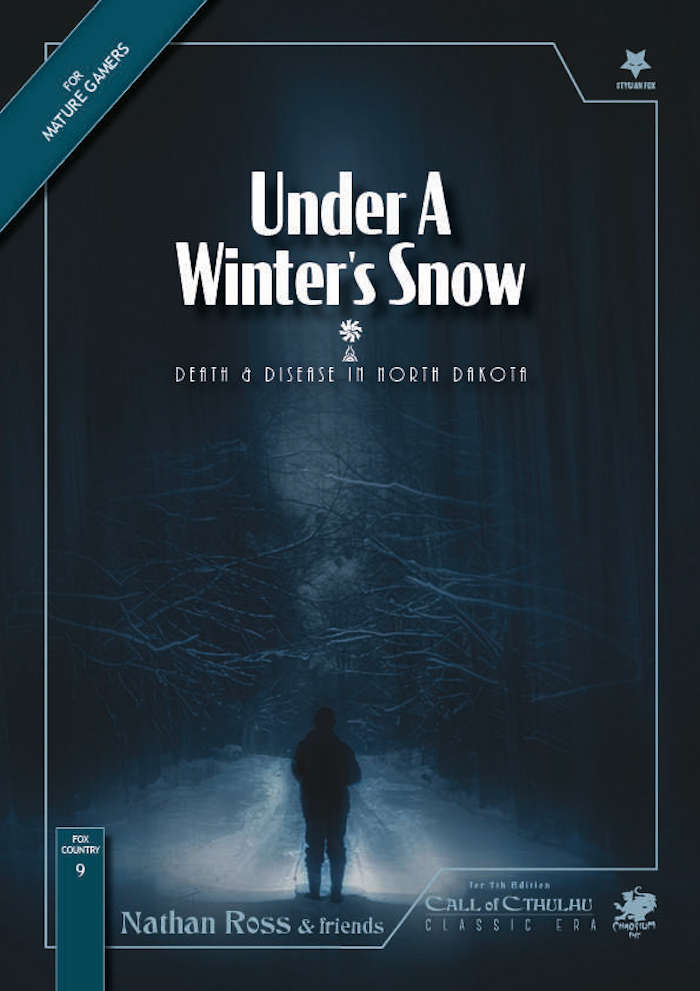 “Under A Winter’s Snow is a one-night scenario for the Call of Cthulhu roleplaying game published by Chaosium, Inc, edited by Chitin Proctor, and written by Nathan Ross and with art by Simon Brake, Badger McInnes, and Stephanie McAlea.

Taking its inspirational cues from Slenderman, Contagion, Who Goes There?/The Thing, and Fargo, the book takes a mature look at the horror of human nature and its ability to shirk from disease, the afflicted, and the causes thereof.

The scenarios deal with unavoidable fates, dark secrets, and seriously bad choices made by the antagonists. As so often is the case, there are no winners when fate has trapped you in a dice game for doom or destiny. As such, please be aware that some of the themes are quite mature and are suitable for Gamers who are at least of young adult age and maturity.”

Games that draw their inspiration from stories that people already know and love always pull me in instantly. It’s instantly enjoyable to fall into a world that I already know. Under a Winter’s Snow works from that commonality found in things like Slenderman or The Thing to set up a game with known stakes and a base level of creepiness. If you’re looking for a Call of Cthulhu one-shot to terrorize your friends with, consider looking Under a Winter’s Snow. 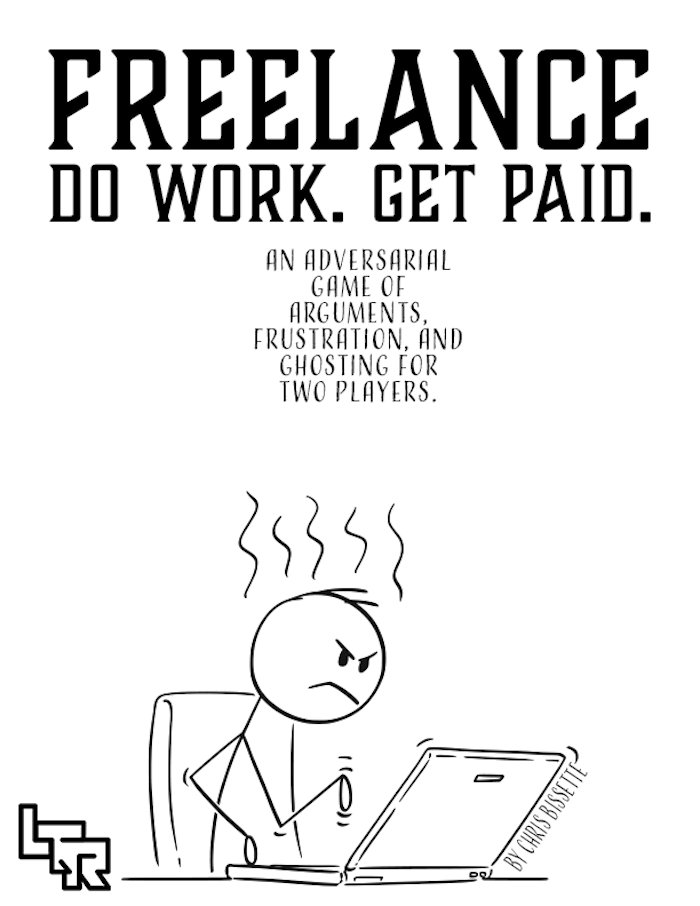 An adversarial game of arguments, frustration, and ghosting for two players.

You are a freelancer who has done work for a client but you have not yet been paid, and the shifty little **** keeps finding ways to dodge the issue. Your goal is to get paid or explode into a ball of impotent rage trying.

FREELANCE is a two-page microRPG for two players, who should probably be friends at the start of the game but may well hate each other by the end. You have been warned.”

If you’ve ever played Monopoly until somebody flipped the board and then voluntarily played again, Freelance may be the game for you. MicroRPGs are some of my favorite and some of the most interesting games on the market and this one promises to be fun if not a little frustrating.

D&D: What To Do When You Can't Get Through That Door 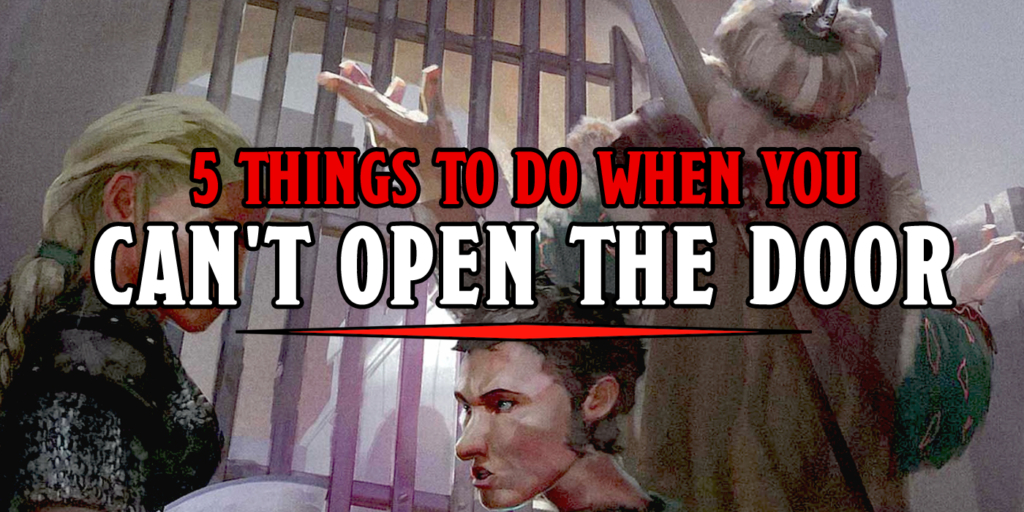