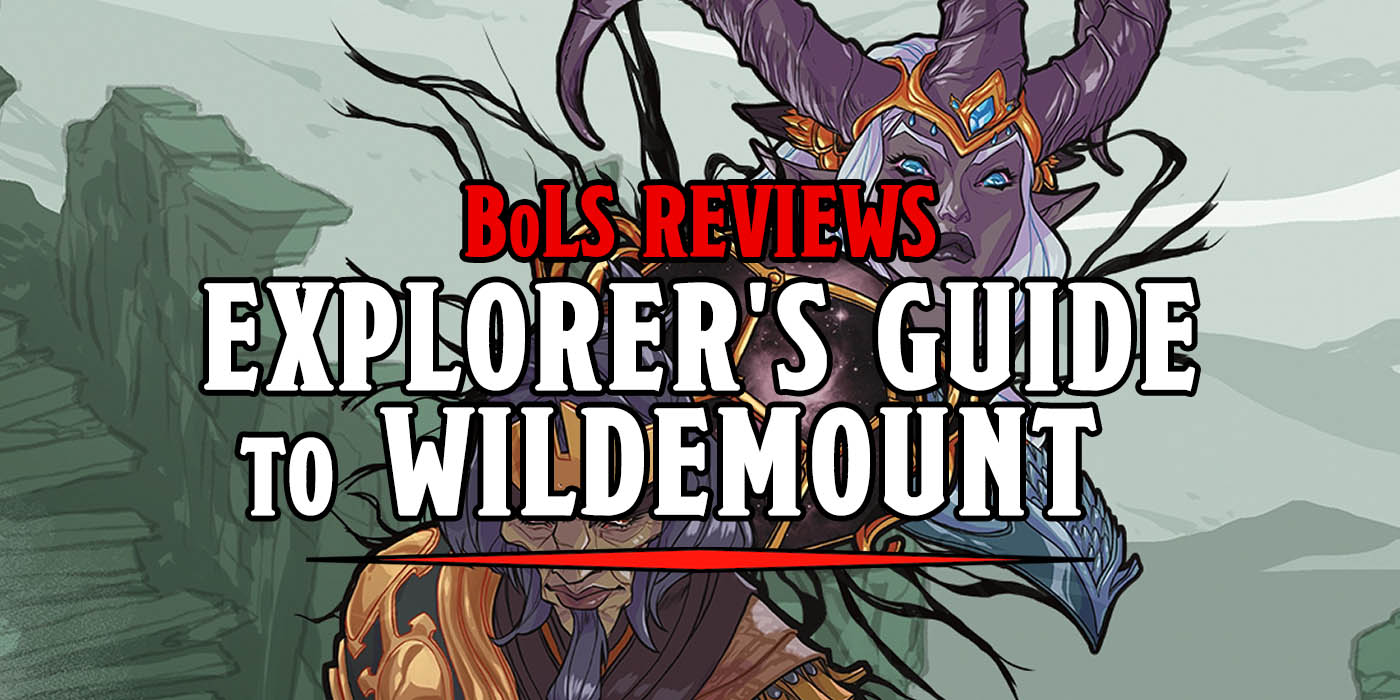 The Explorer’s Guide to Wildemount is here, ready to open up the world of Wildemount to players around the world. How does it hold up?

Five years ago, Critical Role helped D&D 5th Edition smash on the scene in the storied days of 2015. Everyone was excited about video coming to Facebook, Millennials were killing everything, and the world’s most innovative medium was still in full swing. RIP Vine, you keep trying to feed Ryan Gosling cereal in that great big internet in the sky. Back in those days, a bunch of “nerdy-ass voice actors” premiered their streaming D&D show on Geek & Sundry. 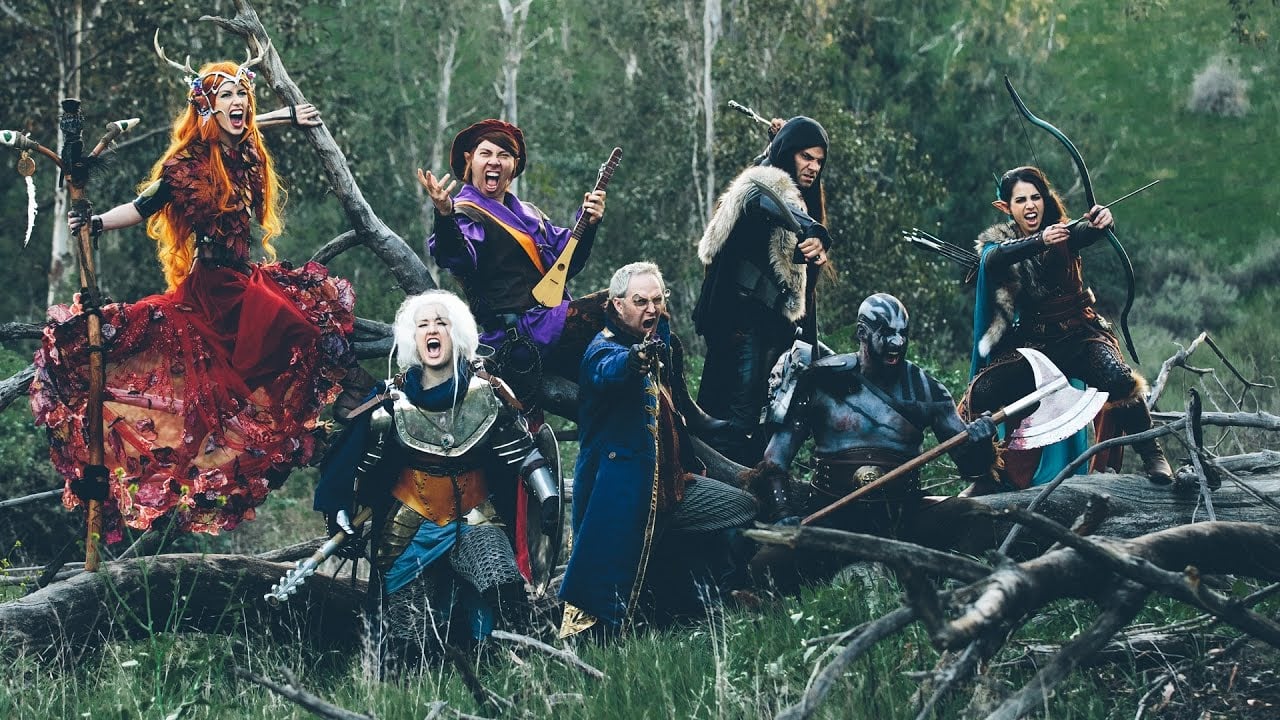 Smash cut to five years later, and Critical Role is getting ready for an animated series set to premiere on Amazon Prime, has successfully transitioned into their own independent media corporation with powerful creative agency representation, and has their own official D&D book coming out. All of this is borne aloft by an aggressively supportive community of die-hard fans. And I’m not just saying that. The day that this new book, Explorer’s Guide to Wildemount was announced, Critters around the world made it the best-selling book on Amazon for the day. According to WotC’s data it’s one of the fastest selling D&D books since the Core Rulebooks that launched the edition.

Honestly the book is already successful. Whether or not it’s good doesn’t matter to the bean counters who presumably sit in a room somewhere in the basement of Wizards of the Coast’s ivory tower where they sit up there all looking down at everyone going about their miserable little lives and–look the point is, this book was predestined to be a success. The fans of the show have snapped it up, and likely will continue to. The real question is, does it hold any appeal for people who aren’t fans of the show?

Or put another way, what is the deal with Wildemount?

To start with, Wildemount is packed full of information. This book is three hundred and four pages long, and more than half of that is lore about the world of Exandria. The first 159 pages are a crash course in Critical Role’s world, introducing Exandria, and more specifically Wildemount to players who are unfamiliar to the setting, and offering up a more detailed look at the world Matt Mercer created to fans of the show. And there is a lot of detail here. Covering things like the different Moons of Exandria, figures of interest in Wildemount’s different regions and powers, the history of the world from the beginning on, the list goes on. Flipping through the pages you’ll find names that sound familiar if you’re even passing familiar with the show.

The Clovis Concord, the Wildmother Uk’otoa, Eisselcross, Hupperdook, Xhorhaz–if it was featured, mentioned, or even hinted at in the show, it’s in the book. And that’s not always to the book’s credit. So much of this book is dedicated to telling you about Wildemount but not necessarily how to use it. Take a look at the book’s first few pages: we get an overview of the four main nations of the area, the calendar and time and seasons and moons of Exandria, as well as a blurb that tells us we can use the same standard D&D currency we have come to know and love.

There is a bit that talks about running the campaign during the midst of a war–but it’s only barely touched on. It sets out three levels of interaction people can go with, then has a segment titled ‘How to Run a War Campaign’ that boils down to “keep characters away from mass battles” and some loose guidelines for stringing a few military-themed combat encounters together. That’s it. Now I’m not saying that I expected this book to have an in-depth guide to mass combat or anything, but if you title your section ‘how to run a war campaign’ I’d like to come away from it feeling like I know how to run a war campaign. 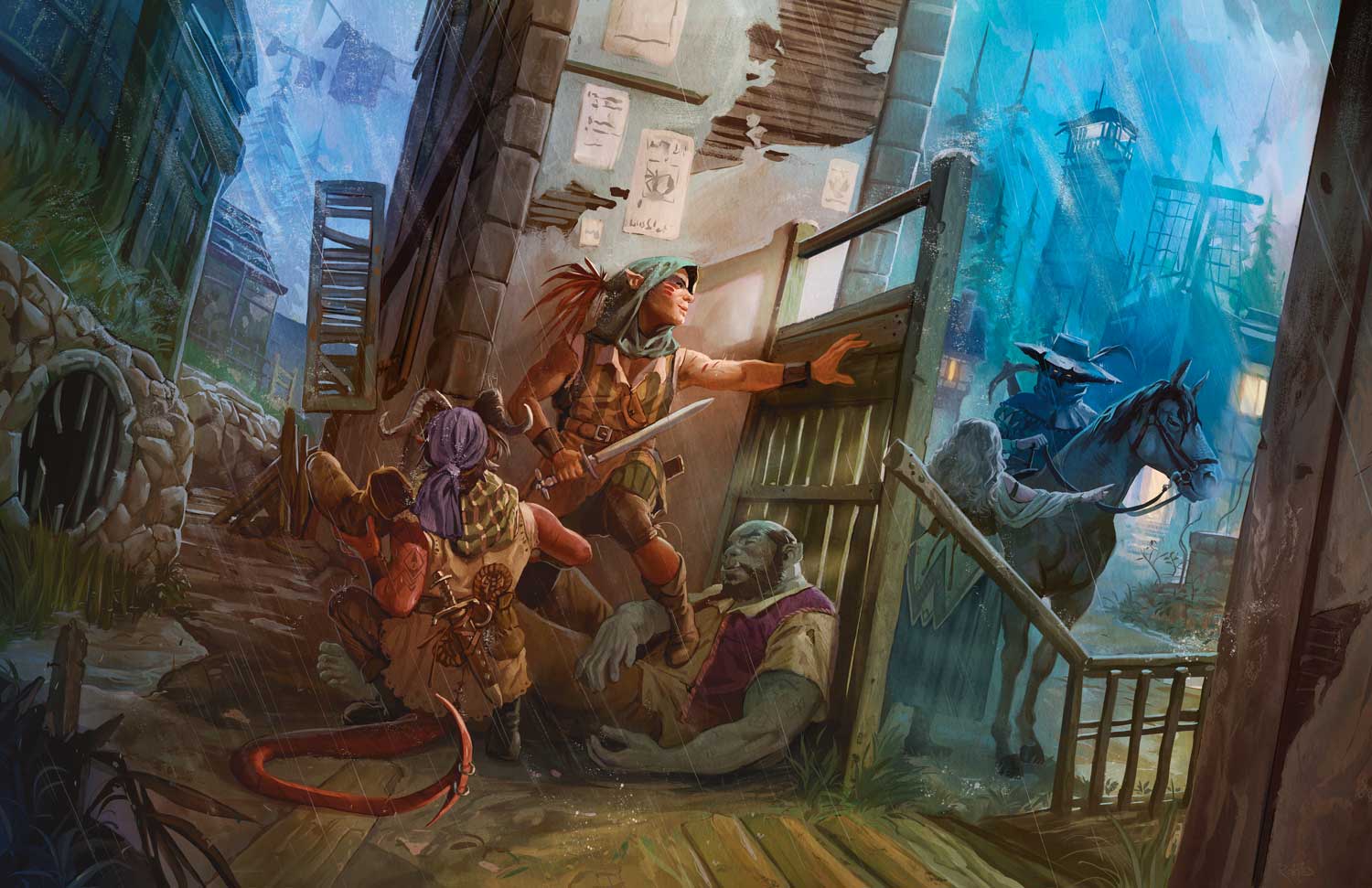 Compare to the first few pages of Eberron: Rising from the Last War. By page 5, Eberron has told you how to use the book, seven things that make Eberron different, given you everything you need to know about the world, and is telling you how to run adventures that feel like they’re set in Eberron. By the time Wildemount is taking you through the world’s creation myth, Eberron has you making characters grounded in a world of pulp adventure, and has told you how to run noir games, how to make rich villains, and more.

And that’s not to say that the lore sections of the book are bad either. Some of them are full of interesting facts that feel much more usable. The list of gods and their ceremonies is a great example of efficient storytelling. We don’t need the details of everything that the gods have done, but in the writeups, we get some salient points. Asmodeus, we learn, is a Betrayer God who once convinced his followers to earn the trust of and then slaughter the followers of Avandra and a new goddess, Raei, a goddess of hope and optimism. This story tells us a lot about what kind of evil Asmodeus is, and it hints at the backstory without getting lost in it. 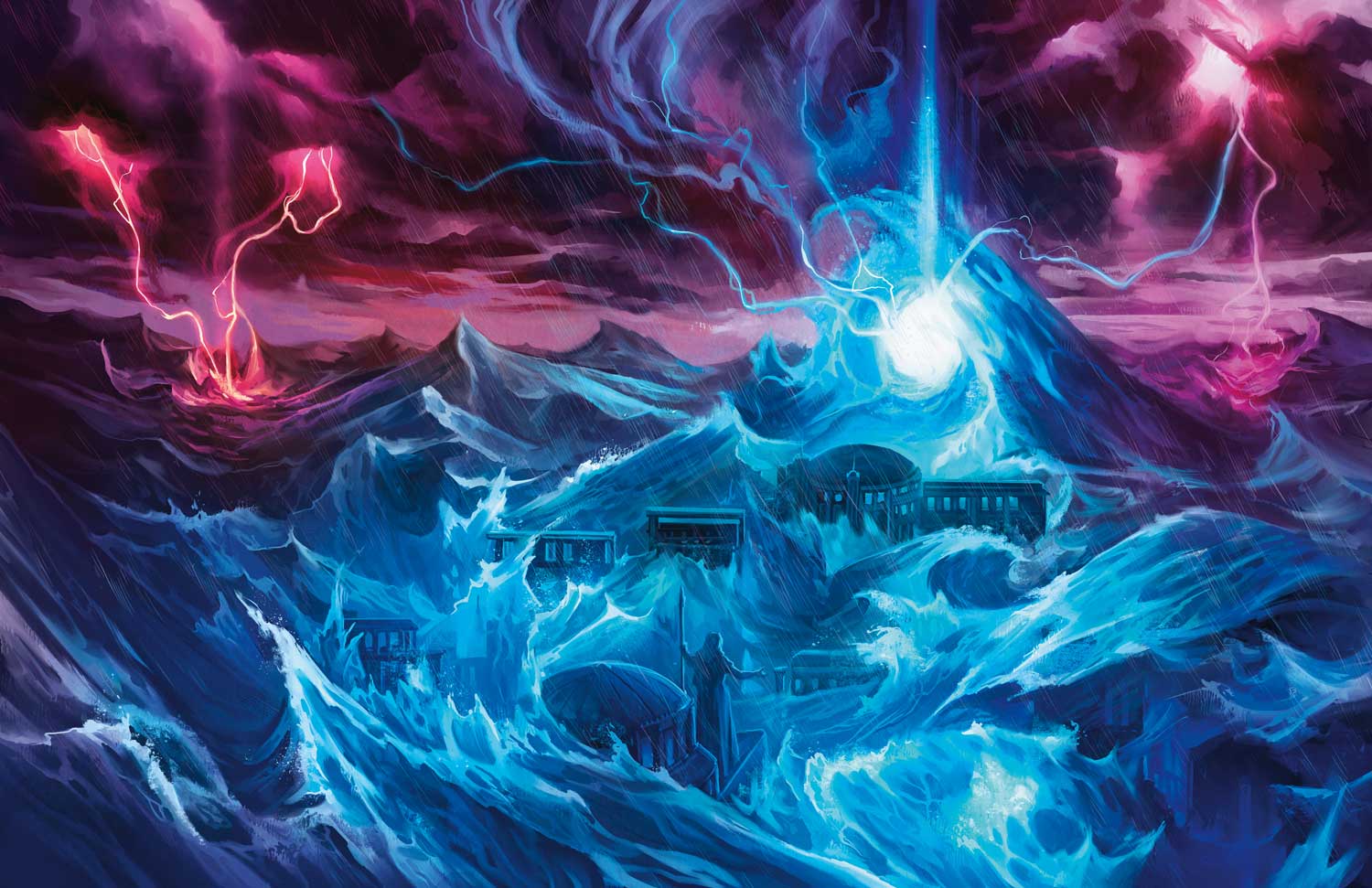 Places like that make the book shine. When you get to the character option section, you’ll find a wealth of information waiting for you. Each of the classic D&D races gets its own writeup, and many have new subraces, specific to Wildemount. You’ll find

As well there are reprints of the racial options out of Volo’s Guide to Monsters, including the updated Orc out of Eberron: Rising from the Last War. I think it’s wonderful that Critical Role and WotC seem to be moving away from intelligence penalty orcs–which is a much-needed step in the right direction. There’s also a new option for players: Hollow One–this is a supernatural gift, so it’s not necessarily something you’d pick at the start, but it’s got some powerful options that connect to the world. 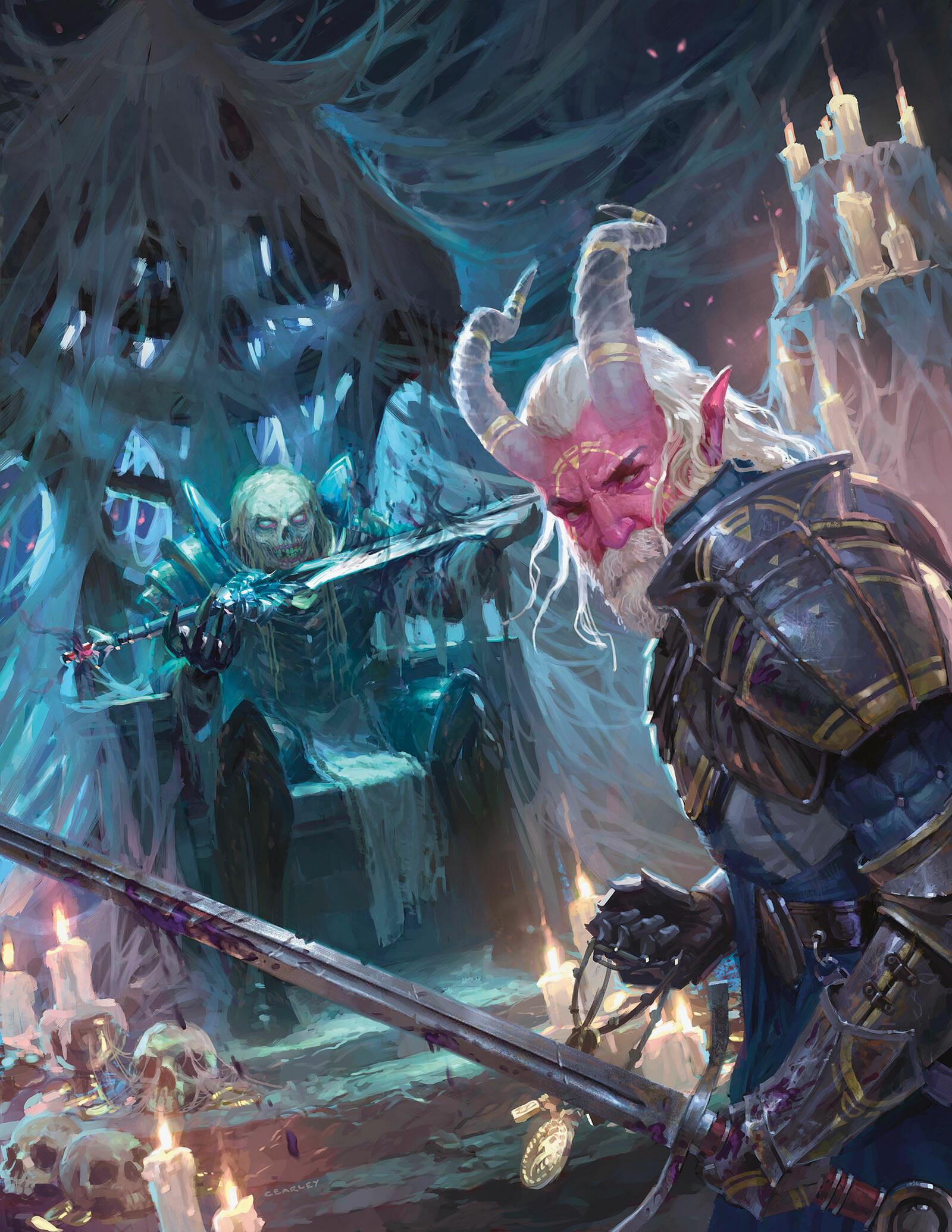 The new subclasses are even better. Echo Knights are a ton of fun. These are fighters who can call upon echoes of themselves from potential universes. You’re kind of like Jet Li from the One, but instead of being a surprisingly underrated action film, you get a shadowy duplicate that you can send into combat and make attacks from, even gaining extra attacks a few times per day. You can do all kinds of echo tricks, like having them take an attack for you and regaining hit points when they die. Best not to think about that one. 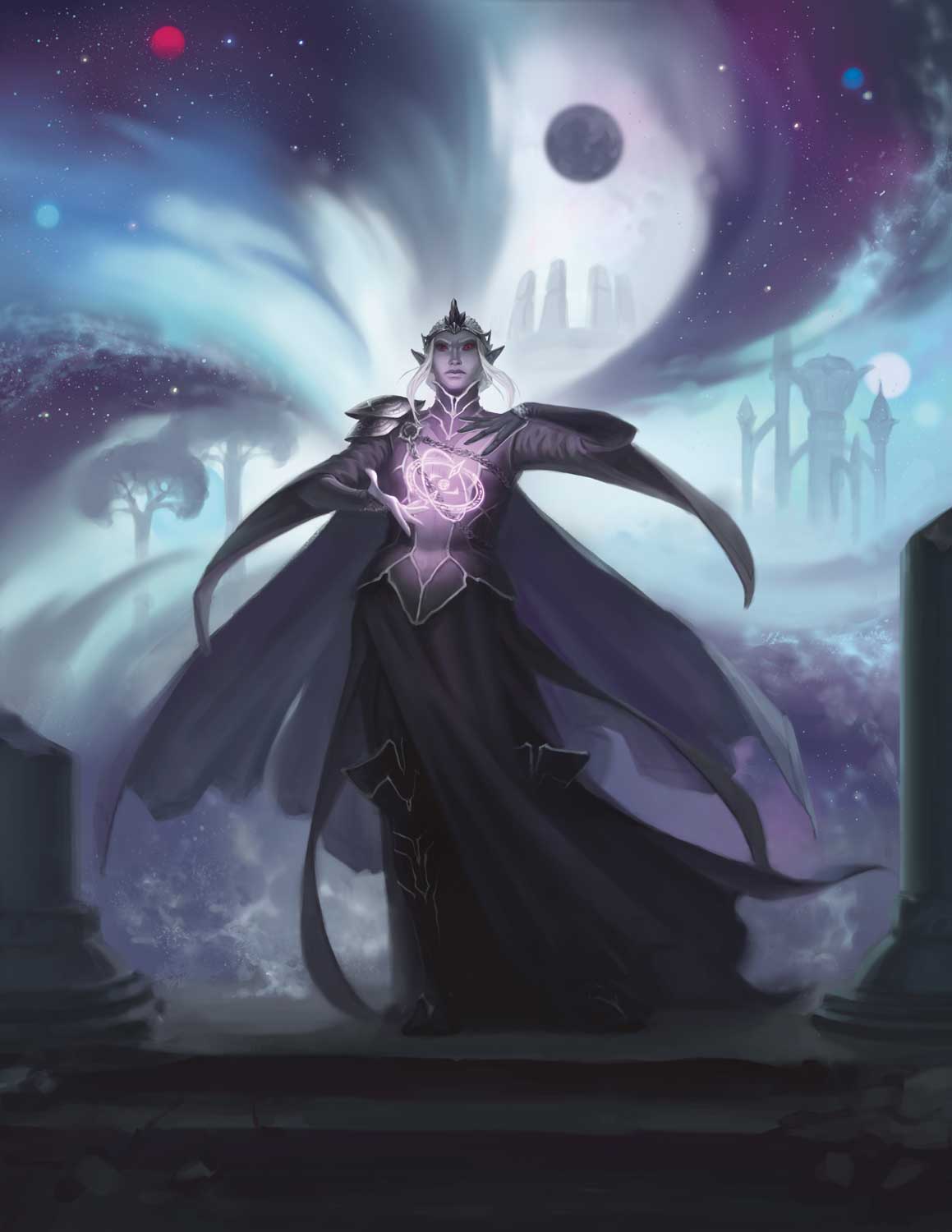 Wizards have two subclasses: Chronurgy Magic, a school of magic all about altering time. This one is going to give DMs headaches, because it contains some powerful abilities and lets you tinker with your spells, eventually gaining the ability to cast a spell, freeze it in time, and then hand it to a friend to cast whenever they want (for an hour at least).

But Graviturgy magic is probably my favorite. This school of magic is all about using gravity and black-hole terminology to damage foes and protect your allies. It’s thematic, and more importantly it’s fun. Both of these concepts highlight the new class of Magic introduced in the book: Dunamancy. Dunamancy is a school of magic that’s nominally about exploring time and space as elemental forces, but practically it’s about recreating some of the best parts of Final Fantasy in your D&D games.

As hard a time as I was giving the lore earlier, the new spell section is everything you’d want. There are fifteen brand new spells here, and though the section on the new spells comes with a disclaimer about how this magic is rare, these spells are just so cool. Whether it’s a simple spell like pulse wave, which damages enemies in a 30 foot cone and moves them around 15 feet (at least), to an ongoing spell like reality break which is one of my new favorite high level spells. It just lets you roll so many d12s.

Other things you’ll find in the book include the new heroic chronicle system, which is a life path system focused on giving your characters connections to the world of Wildemount (or even just your own story). It’s a handy guide to have if you’re trying to create a more interesting character, though I wish they would have talked more about how to make an interesting character instead of just giving you elements on a table–but the prompts are compelling and you can definitely use them to build drama into your party. If you want a deep backstory, this is the place for you. 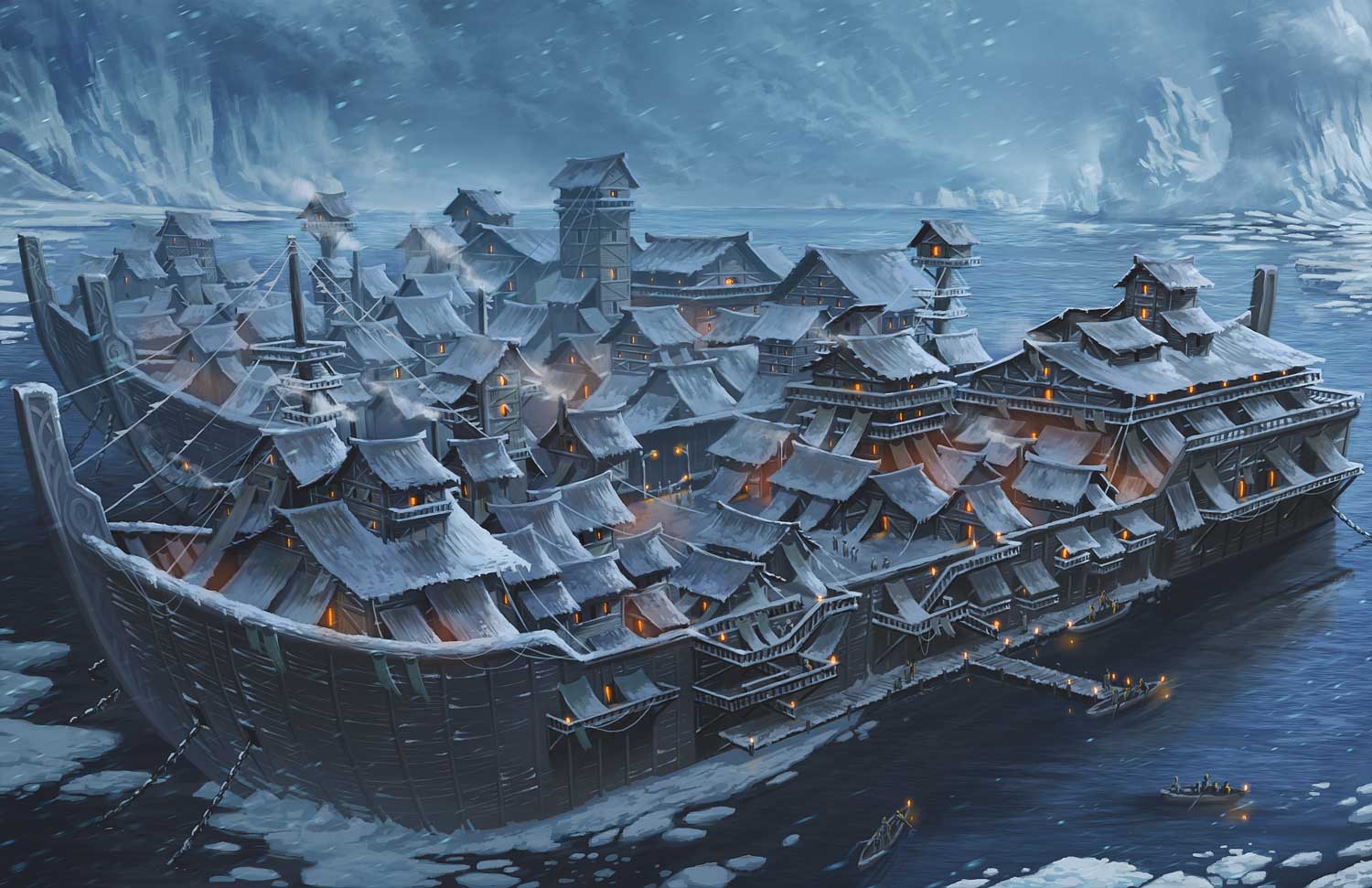 There are four adventures, each one set in a different part of Wildemount, 23 new monsters, and a whole suite of artifacts that are worthy of a whole article on their own.

All of that to say, if you’re interested in Wildemount, this book is definitely for you. This book adds a much deeper look into the world than we’re ever likely to see on the show. If that doesn’t sound appealing, this book probably isn’t for you–but there’s still interesting stuff in the new subclasses or the new spells or monsters. If you’re a fan of the show–the book feels more like D&D than Critical Role, for better or worse, but it really shines when they can lean into the things that make the show feel magical.