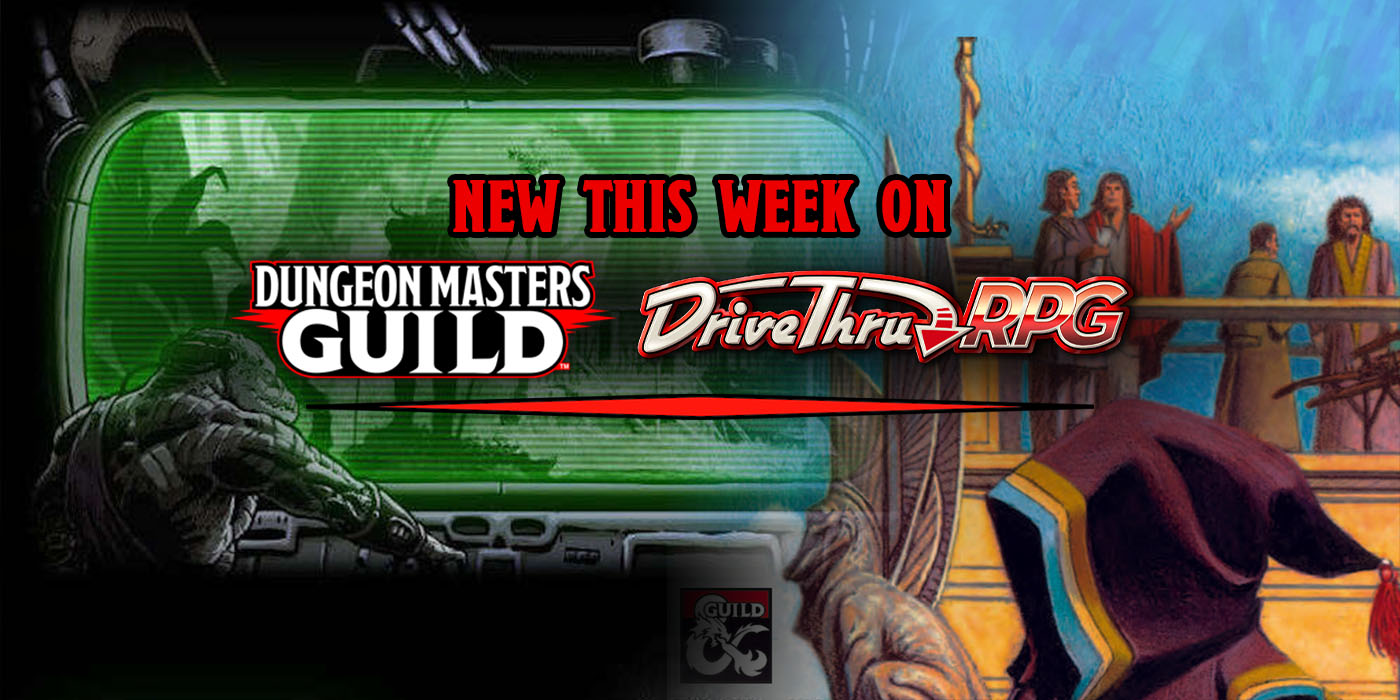 This week DriveThru RPG and DM’s Guild have angels, goblin astronauts, and punk faeries who fight fascism. There’s a lot happening and all of it is great.

Relics: A Game of Angels 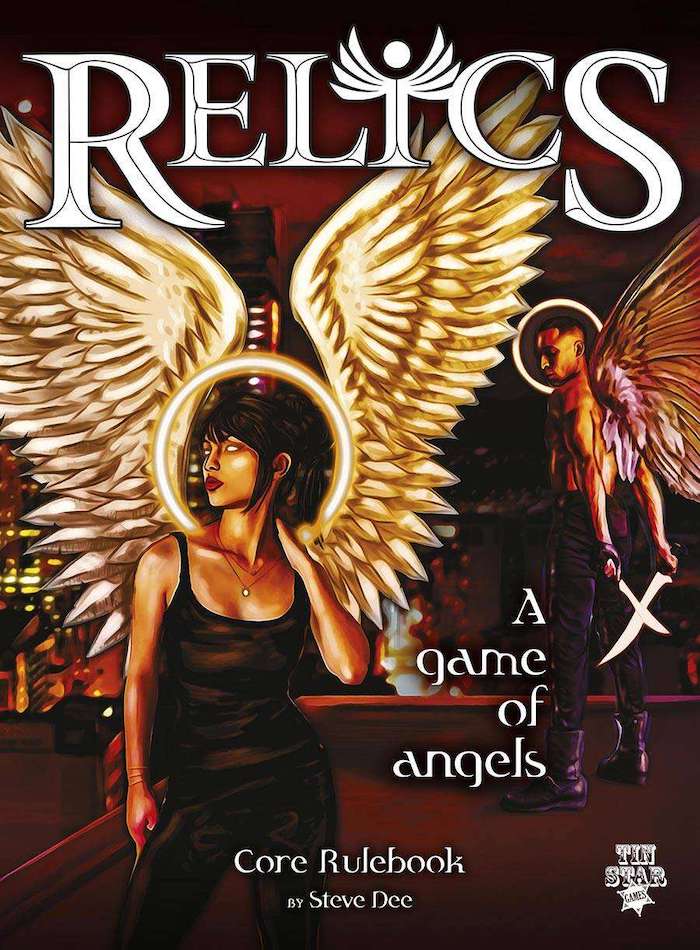 “Trapped on Earth. Surrounded by Enemies. Desperate for Answers.

God has gone and the Gates of Heaven have slammed shut, leaving angels and demons abandoned on the mortal world. Their powers, long trapped in physical objects, now begin to awaken and the cold war between the two sides erupts into a arms race to control all of creation. A desperate, brutal battle will be waged in the present on the secrets of the past.

Relics: A Game of Angels is a roleplaying game in a world inspired by Wings of Desire, Dogma and The Prophecy. Players take the role of angels who have lived on earth for hundreds or thousands of years. The unique memory system allows you to build an ever-growing backstory as you play, making you the unreliable narrator of your own past. Plus the simple Tarot-card system makes gameplay simple and fast, with characters made in just minutes.

Kitschy and stylized, this game looks like like fun. The ‘make it up as you go’ background / memory creation system could lend itself so well to difficult heartfelt moments as well as hilarity, plus any game that manages to incorporate tarot cards into he game is a winner in my book. Fun fact, I collect nerdy tarot decks and have a Good Omens deck that would be perfect for a one shot in this system. If you like unique RPG experiences with lots of improv and meaningful character interactions and histories, Relics may be heaven sent. 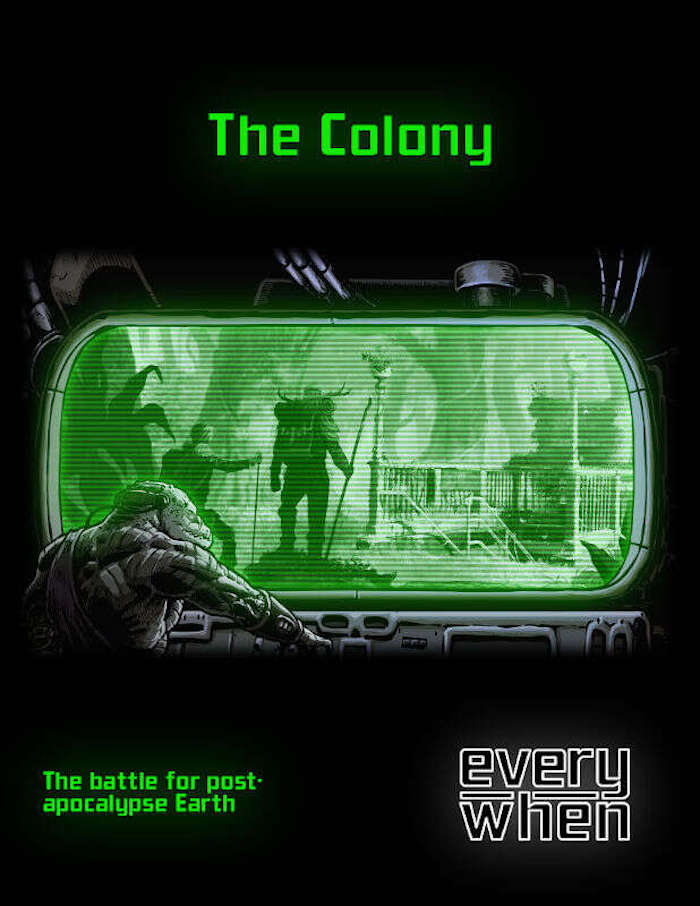 “The future. After a world-wide, virulent pandemic dubbed The Fourth Horseman wiped out civilisation, survivors at Ares, the international base on Mars, listened helplessly as humanity sickened and died. Communication became erratic before ceasing completely. The colonists were on their own, the last living people… as far as they knew.

The people of Ares no longer think of themselves as being from Earth. Nor do the aggressively genetically-engineered young adults of the Fourth Generation look strictly human any more: larger, thicker skulls, thicker bones, and big eyes. Sometimes, they catch the older people staring at them. Sometimes, even their parents stare at them.

Unfortunately, an unexpected side effect of the genetic manipulation was a boom in the birth of twins, triplets, and quads. Mars has too many strong, and loud, and disrespectful children, and there is friction between them and the adults.

The number of young adults in the Fourth Generation is too high. It is time to expand; it is time to take back the Earth… It belonged to them once; it will belong to them again.

A setting for the Everywhen RPG. Includes an introductory adventure, 6 pregens and a blank character sheet.”

The Colony provides a sci-fi setting which manages to be classic and obvious but also interesting and unique; it’s a sweet spot of engaging to play in while being comfortable enough where players basically know exactly what everything should look look like. This game comes with an intro module to get you used to what the universe should feel like and get your own campaign kicked-off, as well as 6 pre made characters, so if your group isn’t sure exactly what to be imagining, The Colony will get you kicked off nicely. Or, you can ignore those and make up your own space adventure using the general background and rules of The Colony. 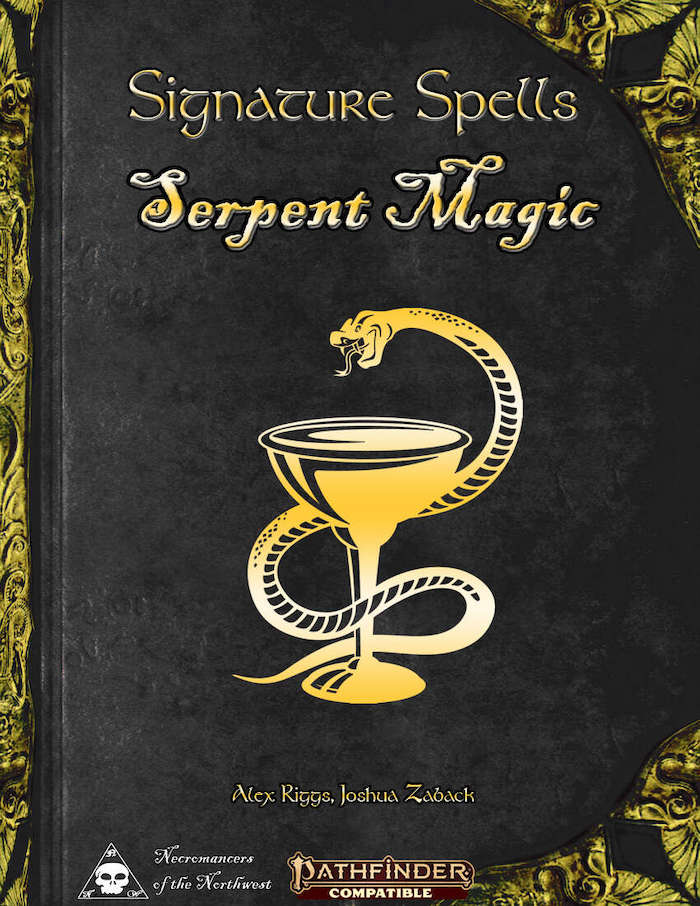 Knowledge is power, especially when that knowledge relates to casting spells. With a wide and wonderful world of magic out there to explore, a spellcaster’s repertoire of spells not only allows them to do fun and exciting things, but can also help represent and define who they are and what kind of magic they are wielding. The Signature Spells series, for the Pathfinder Second Edition Roleplaying Game, provides exciting new spells with strange and unusual abilities, all linked to a specific theme.

This book focuses on spells relating to snakes and serpents. In addition to simply conjuring, speaking with, and influencing snakes, you’ll also gain access to some of their signature abilities, including growing fangs that deliver deadly venom, shedding your skin to escape from harmful effects, and more. You can also curse others with serpentine aspects, even causing their limbs to wither away into their bodies. In all, you’ll find 12 new snake-themed spells to spice up your spellcasting.”

Snakes are cool! Not everybody loves a danger noodle, but I think they’re pretty neat. If your Pathfinder character has a very specific aesthetic, or just really likes interacting with animals and drawing inspiration from nature, this may be the book of spells for you. Plus, growing fangs and venom are pretty cool perks. 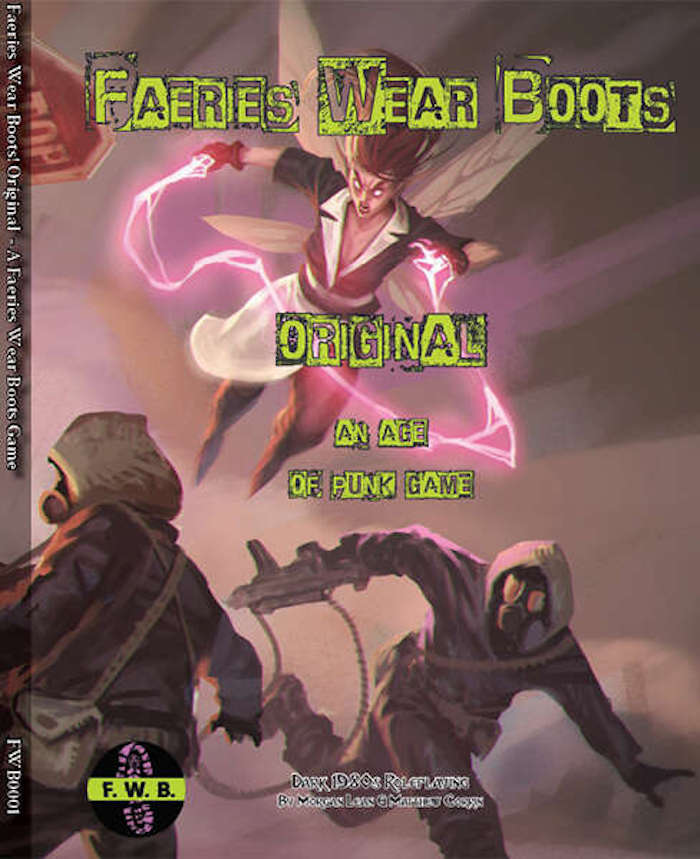 ““The carnival had been dark for decades; the smell of garbage and failed endeavour pervaded the place. Sitting on a fence the pixie eyed the mortal with a curious look. The elf woman, in tartan skirt and safety pins approached, in an instant he would forget he ever saw them, forget that the riot they saved him from was a cover for darker forces at work in Thatcher’s Britain. In this world, Fairies exist, and they wear Doc Martins.”

In this game the players play Faerie Punks working against the oppressive fascist regime of the British government. Transport yourself in a past un-remembered where you can be the force of change.

What’s in this book

♦ Rules for Playing Faeries Wear Boots! in the 1980s complete conversion.
♦ English Setting,
♦ 10 Faeries.
♦ Monsters, which have made it to the modern era.
♦ 1980s equipment.

A Roleplaying Game about Faerie Punks against the Establishment. Part of the Dark Stars Universe of Games. This is a complete role playing game with rules, monsters and setting information.”

Faerie Punks fighting an oppressive fascist regime. Do I need to say anything else? The only reason I didn’t smash the “order” button as soon as I read those words in a row was because I’m on a work computer instead of at home. Faeries Wear Boots! looks awesome; a way to incorporate the magic of D&D into something like a real world setting. Find your old punk CDs from high school and overthrow a regime with your friends this week. 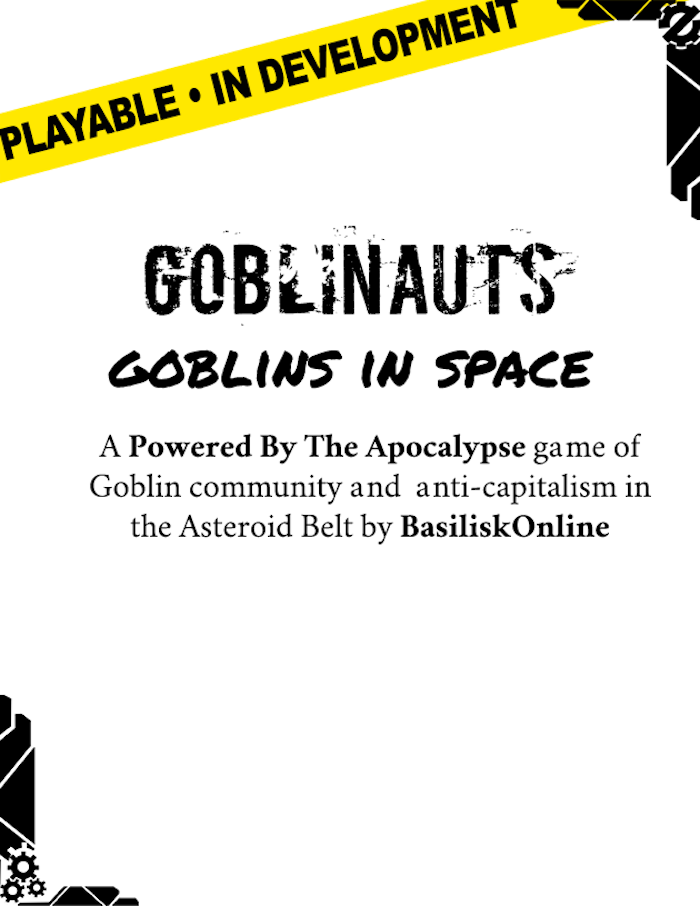 “To get away from those oppressive talls, we left Earth. Left behind all the horrible shit humans and the rest did to each other, all the violence and hate.

Many discussions were had. Everyone agreed the moon was too close. We were farther along than others, technologically, but they weren’t that far behind. If we were that close, it’d be only a matter of decades, at most, before we’d once again struggle with their boots on our necks. Especially in the shadow of the Earth itself. Nah, the Moon was definitely too close.

Mars was a contentious point. We were fairly certain we could settle it, several of our brightest minds already had the tech needed to begin, but that megalomaniacal fascist billionaire already had his eyes on turning Mars into a space slave colony… oh, sorry, it was indentured servitude. If not decades, only a century or more would see us once again in conflict with those terrible capitalists. No, Mars, too… was too close.

The Belt was the only place we could see to settle. So to the belt we went. In giant secret ships, almost every Goblin left the Earth and its terrible denizens behind.

Two-hundred years we’ve been here, on our own. Two hundred years of peace. Now they come knockin’, once again, but I’ll be damned if we are gonna give up ground twice. We ain’t gonna let them push us out, and we aren’t going to let them treat us like they used too.”

This is another game that I am entirely sold on with he description alone. Space goblins? The Powered by the Apocalypse system? Yes, please! The background story of goblins going into space to get away from humans is incredibly interesting but also very funny. And now the humans are spreading out into space, how will your space goblin respond to the invading talls? 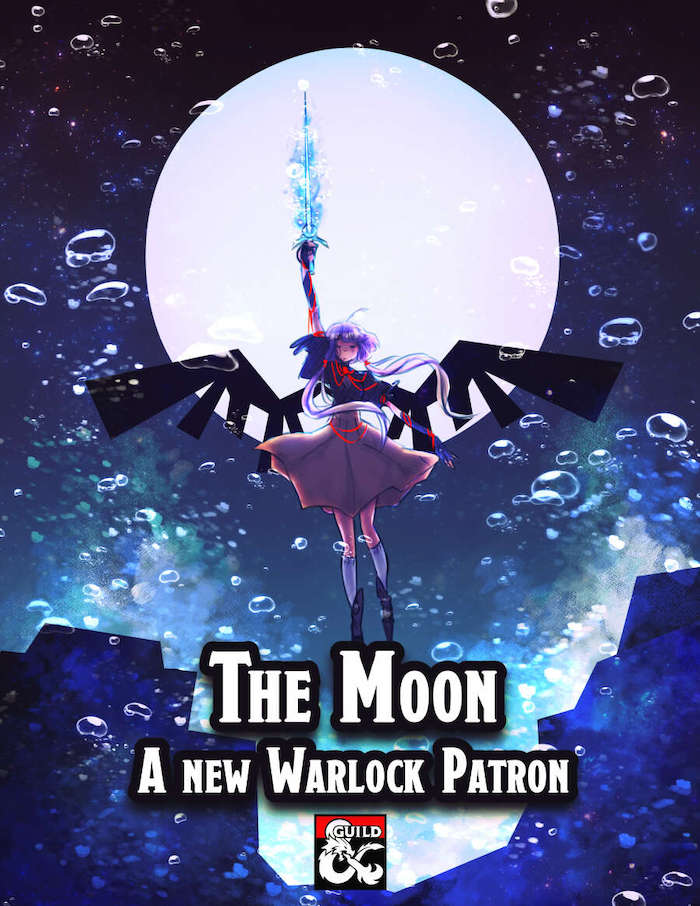 “Moon warlocks have made a pact with who many call “The Man in the Moon” – an entity able to bestow
magic and power to those who feel the world has wronged them, to those who understand that not
everything is as pretty as it is in bedtime stories.

What would you do if you had the power of the tides on your side?

What would you do if you could feel the radiant energy of the Moon ebb and flow through your veins?

Would you reach out and make a pact?

Moon prism power! Do you want to play a warlock but none of the existing patrons really speak to you? What about the moon? Yes, the entire moon. You control the tides. Are you stronger at night, or during an eclipse? Your new moon patron gives you new spells, invocations, and magic items as well as the bragging right that you are in with the moon.

The Oath of Spite Paladin 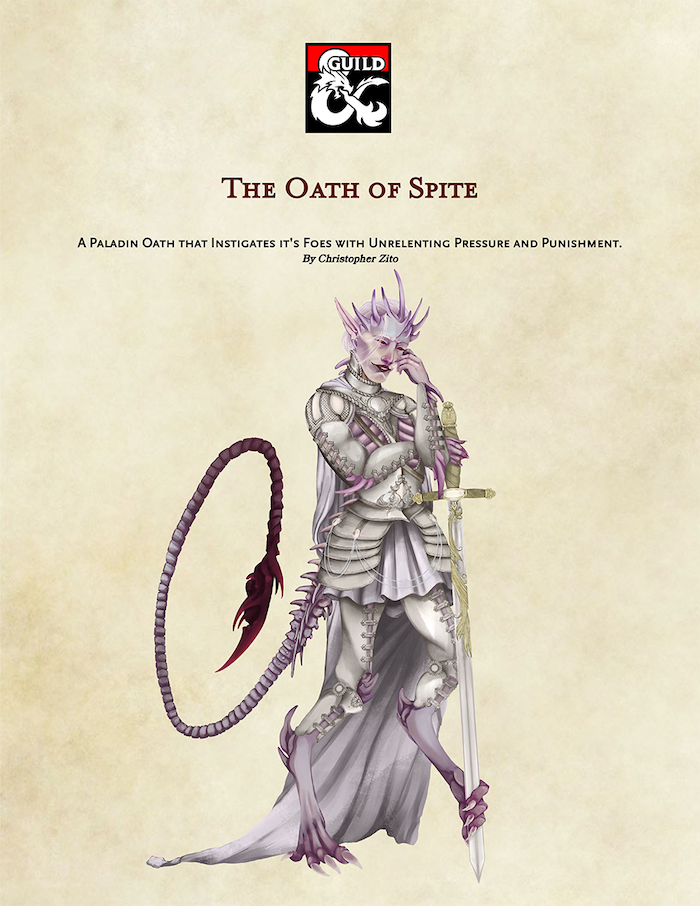 “A Spiteful and Vindictive Paladin Oath

Looking to play a Paladin who is not afraid to hit below the belt? Want to stop an your enemies tracks so hard that you are punishing them for even attempting to take an action? Want to deny your enemies just enough for your allies to swoop in for devistating blows?

…Wanna talk that good *#$! and actually get away with it most of the time?

Then the Oath of Spite Paladin might just be what you’re looking for!”

Every good paladin in every band of murder-hobos knows the frustration. It’s okay, give into your hate. Nobody else is playing fair, why are you? If you want to play a paladin that’s not quite as bad as the oath of conquest but also not as goody-goody as just about all of the other oaths, perhaps it’s time to get spiteful. 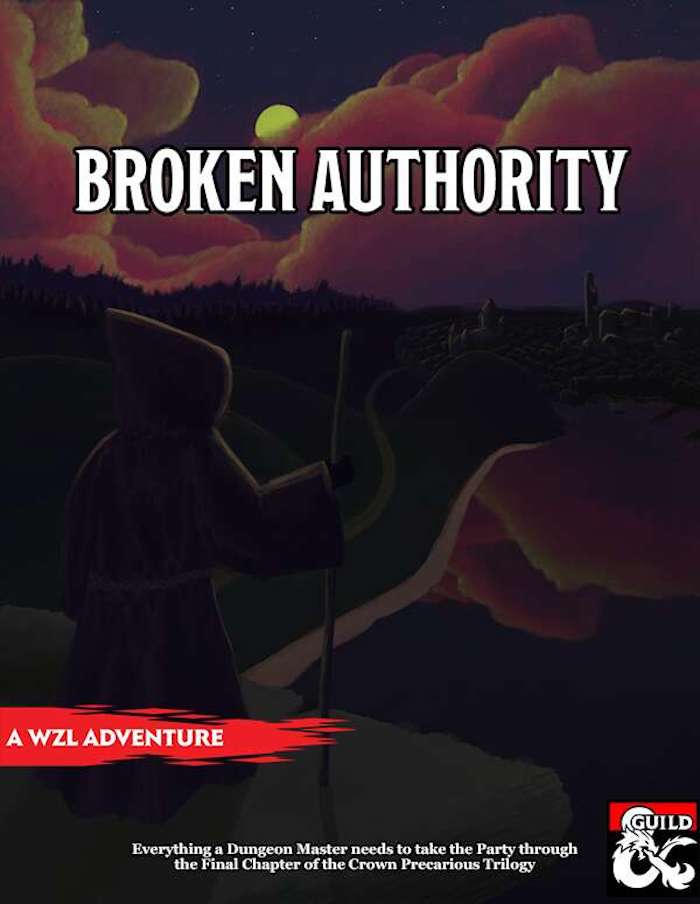 “A grave situation turns even darker, does your Players have what it takes to save the nation from two adversaries at once?

Let your Players embark on a journey through naked brawls, corrupted politicians, dragon backed invasions, lavatory escape tunnels, love sick gnome artificers, flying get aways, Zhentarim assassins, and a full blown siege with the princess trapped in the traditional tower! This four act adventure for lvl 6-8 characters is the grand finale in the Crown Precarious Trilogy, but can be run as a separate adventure.

This is the third part of the Crown Precarious Trilogy.

2. The Light at the End of the Tunnel.

The setting is Cormyr of the Forgotten Realms, but can easily be altered to fit the Sword Coast
or any other setting.”

I didn’t pick out any other models this week – there were just too many cool things. But this one stuck out to me. Twelve hours of play time is good for at two or three full sessions, plus illustrated maps, NPCs and variable encounters. This module is uniquely well thought out. Plus, the adventure description looks pretty fun. If you need something to do with your players for a few sessions, give Broken Authority a shot. 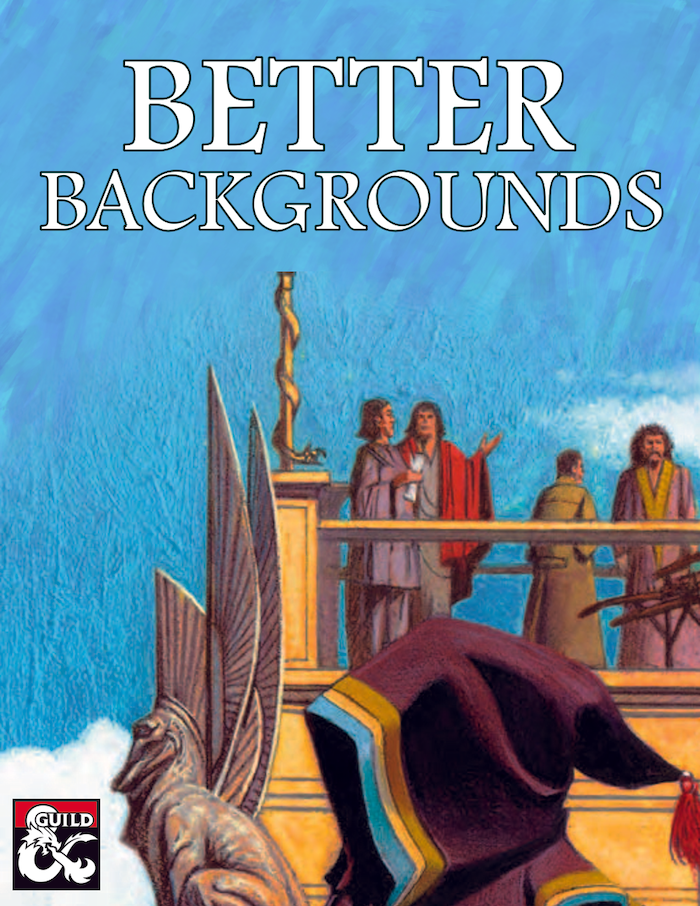 “Have you ever felt dissatisfied with backgrounds? Wanted more choices in your character creation, or the ability to further develop your background as you level up?

Some of the backgrounds in the players manual aren’t awesome. There just isn’t enough variety! Better Backgrounds adds more diversity of background and feats, making your characters more interesting and multidimensional.

What will you be picking up this week? Do you have a paladin that deserves to become a little spiteful? Do you have a new nerdy tarot deck for me to check out? Let us know in the comments!