Goatboy’s 40K: I’ve Got a Thing for Chaos Knights 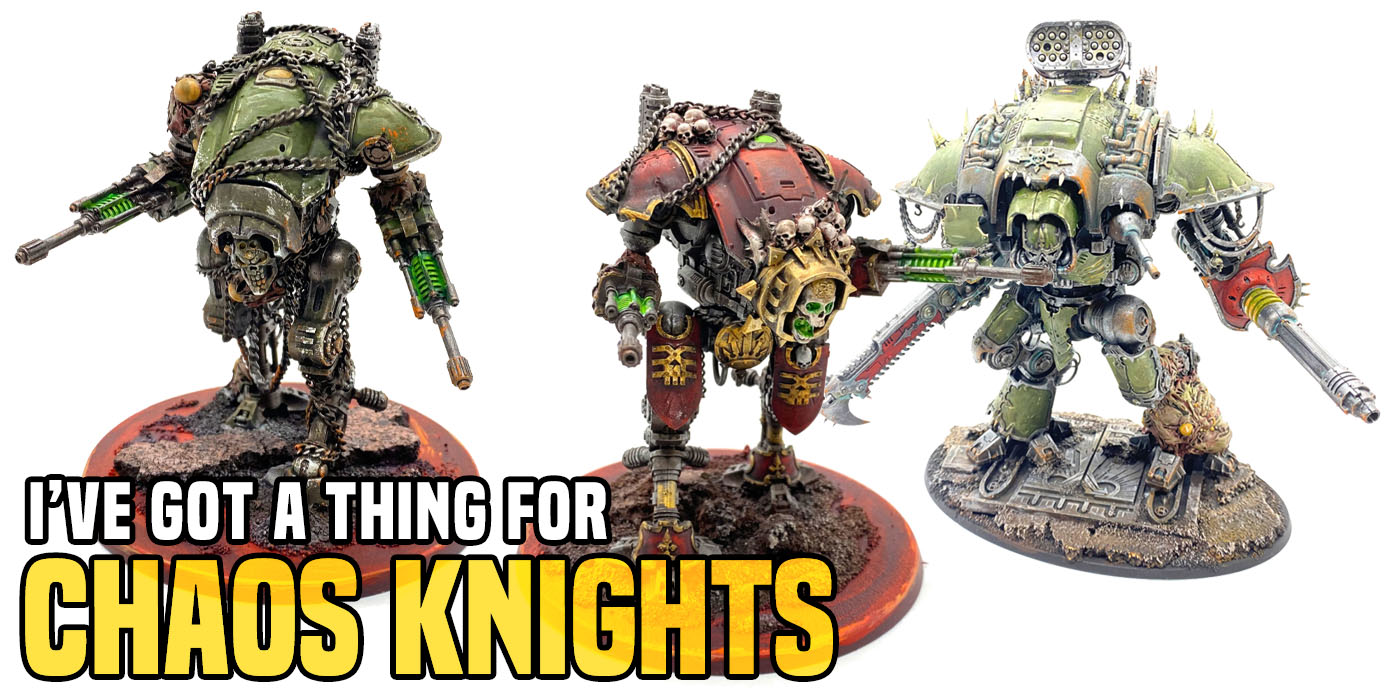 I love big ass crazy models. Thus I built these crazy dudes.  The Moriax for Chaos Knights is a very good model and the Lightning Coils are amazing.  Thus why I have 5 of them.  They are all magnetized so I can hot swap them for the Autocannons if I wanted too.  Either way they are here to shoot out a ton of lightning and kill all my enemies.  I also wanted to do a bit of conversions on them with crazy legs, chaos bits, and those cool guns coming from Decimators.

First of all will go with my Nurgle Leader Knight. I expect him to be one of a set of Knight brothers who has decided to dedicate himself to Nurgle (please let me do this in Engine War GW – pleeeassseee). I lost one of his leg plates and thus why he has that weird big fat stanky leg.  It was built from the weird Nurgle riders from Age of Sigmar. 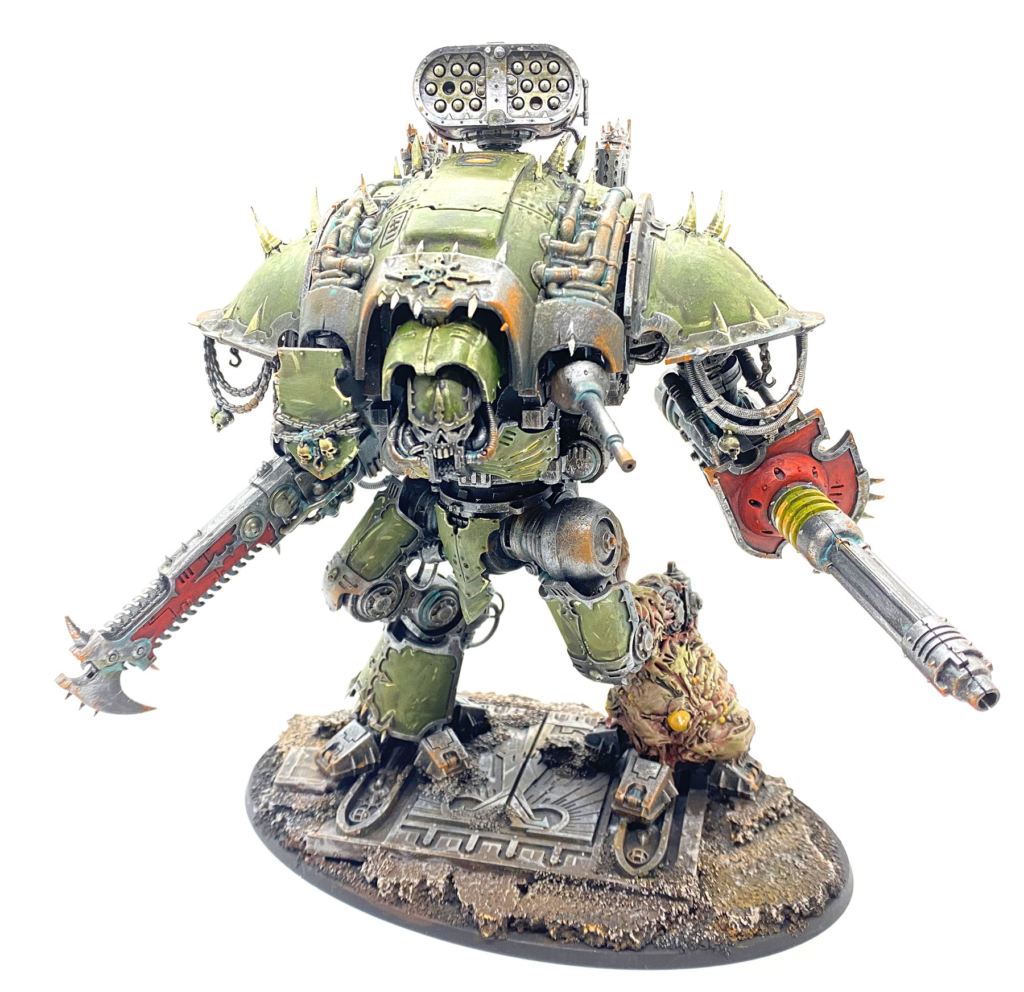 His arms are magnetized – so he can usually be the double thermals that are the best thing in Chaos Knights.

Next let’s go with his Khorne loving brother.  The FW kit on top a Knight.  You can see the shield that fell off on his base.  I guess I will fix that at a later point. 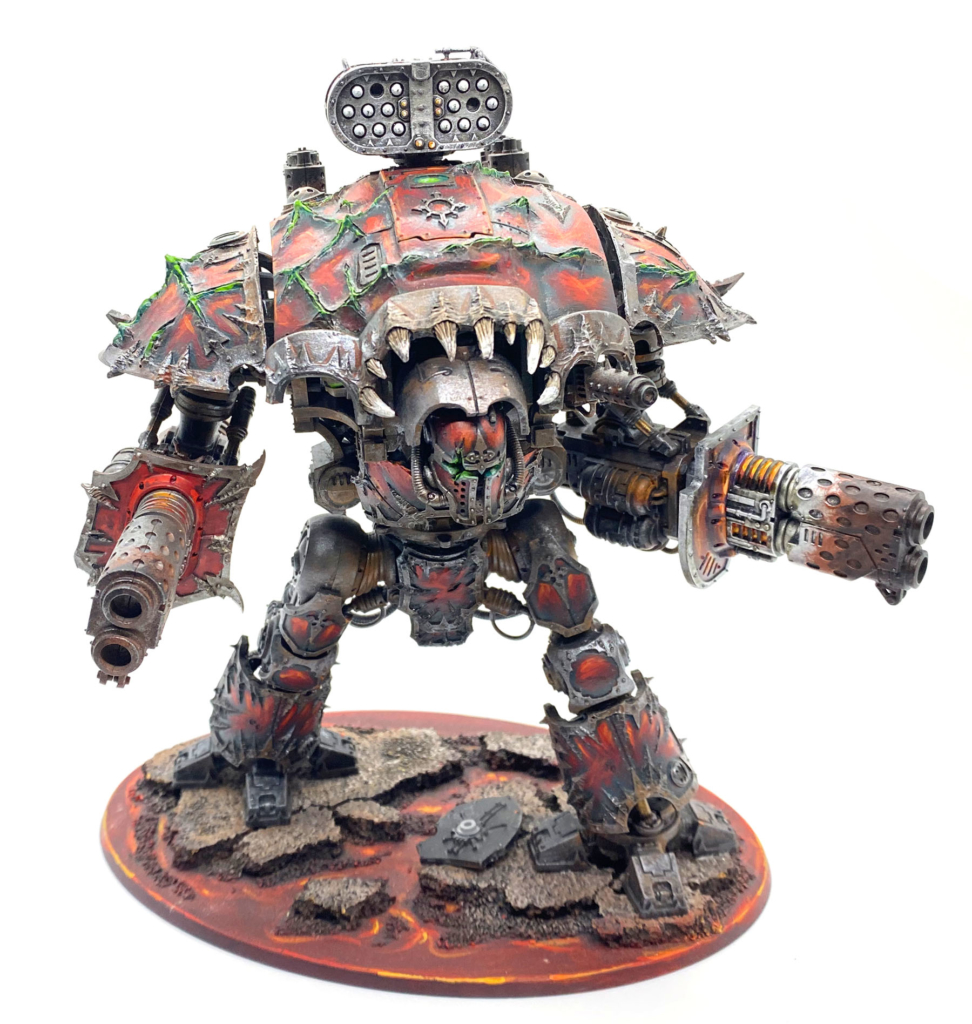 Now the meat and bones of these conversions – the Moriax’s.  I made 3 Nurgle ones and 2 Khorne ones to match up these Knights.  They all have some conversion/kit bash nonsense like using Green Stuff, plastic bb’s, jewelry chain, and even some weapon bits from a Chaos Decimator (modified Storm Lasers).  Speaking of which – I need to make one for a client. 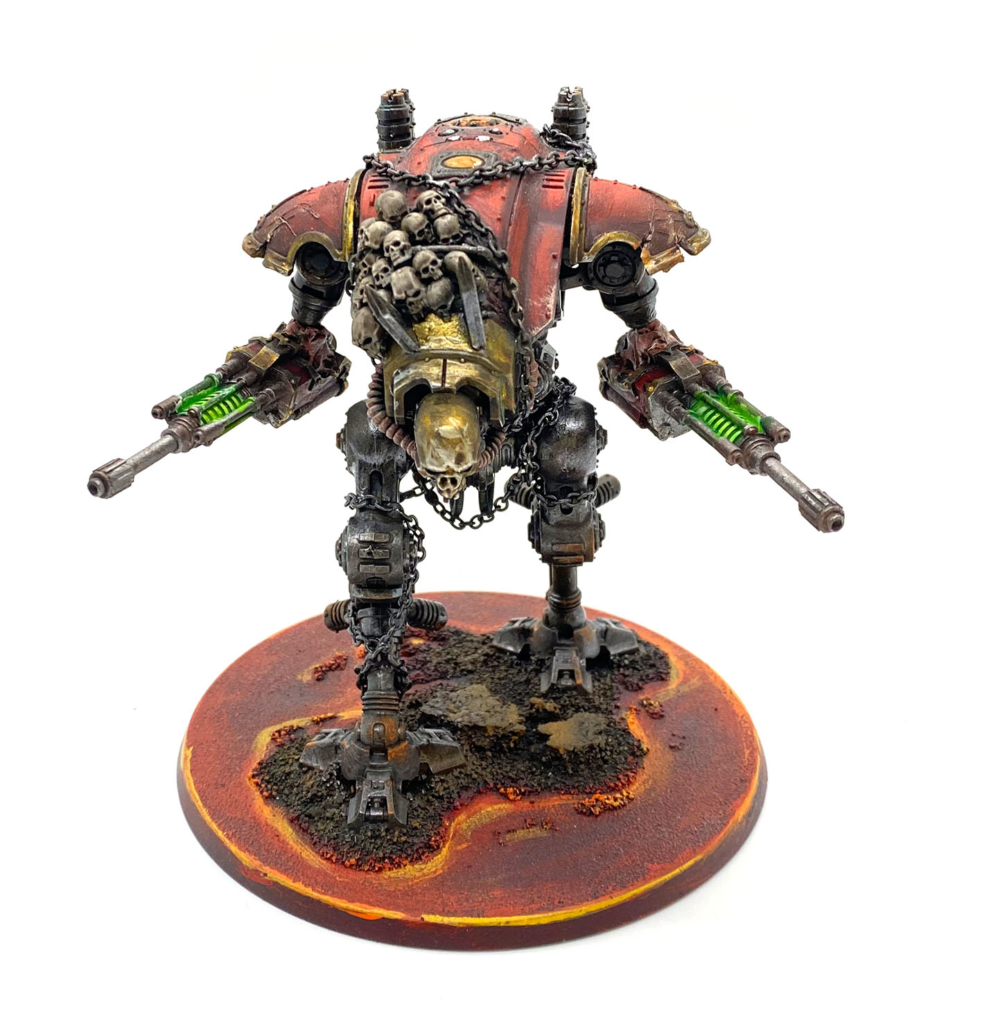 First a Khorne one I made – threw on the skull from the big GW skull kit, cut up some shoulder pads, used the lovely Tentacle Maker, and finally threw on some chain.  Got to love that Skull kit. 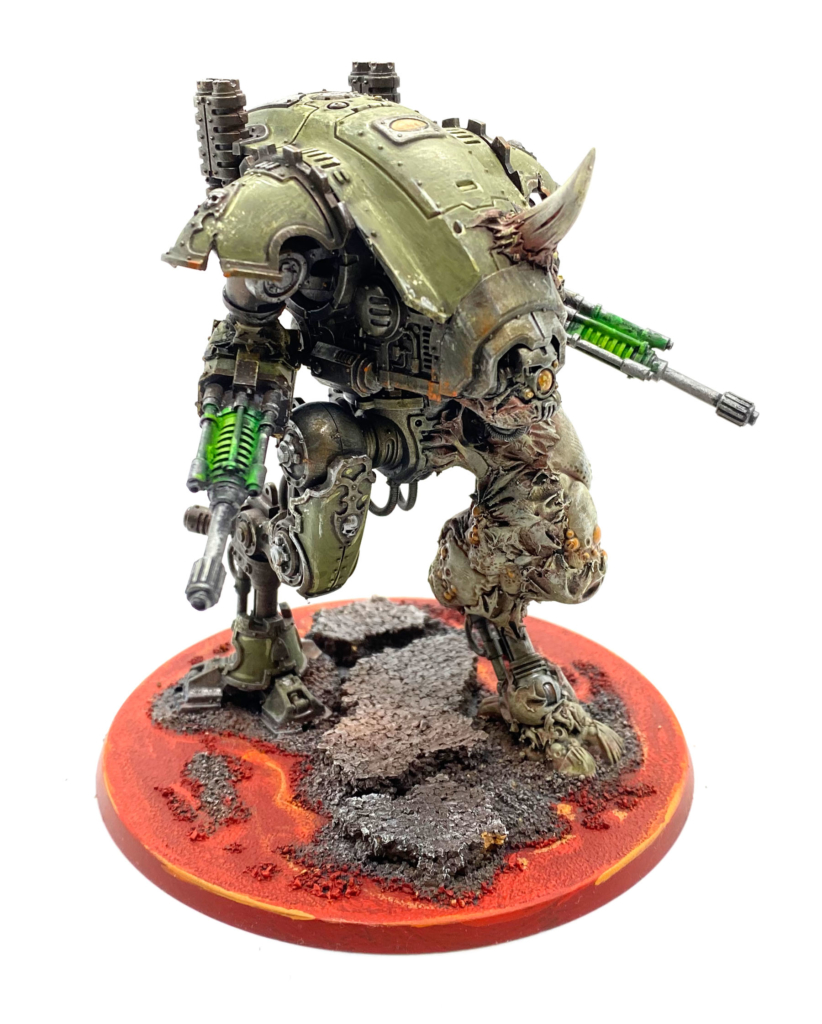 This was the first – stanky leg model I made.  He has a lot of the Nurgle Riders from AOS parts with some of the feet, lots of the body parts, and again some green stuff.  Just a gross model that I love with the weird yellow sacs of sickness pudding? 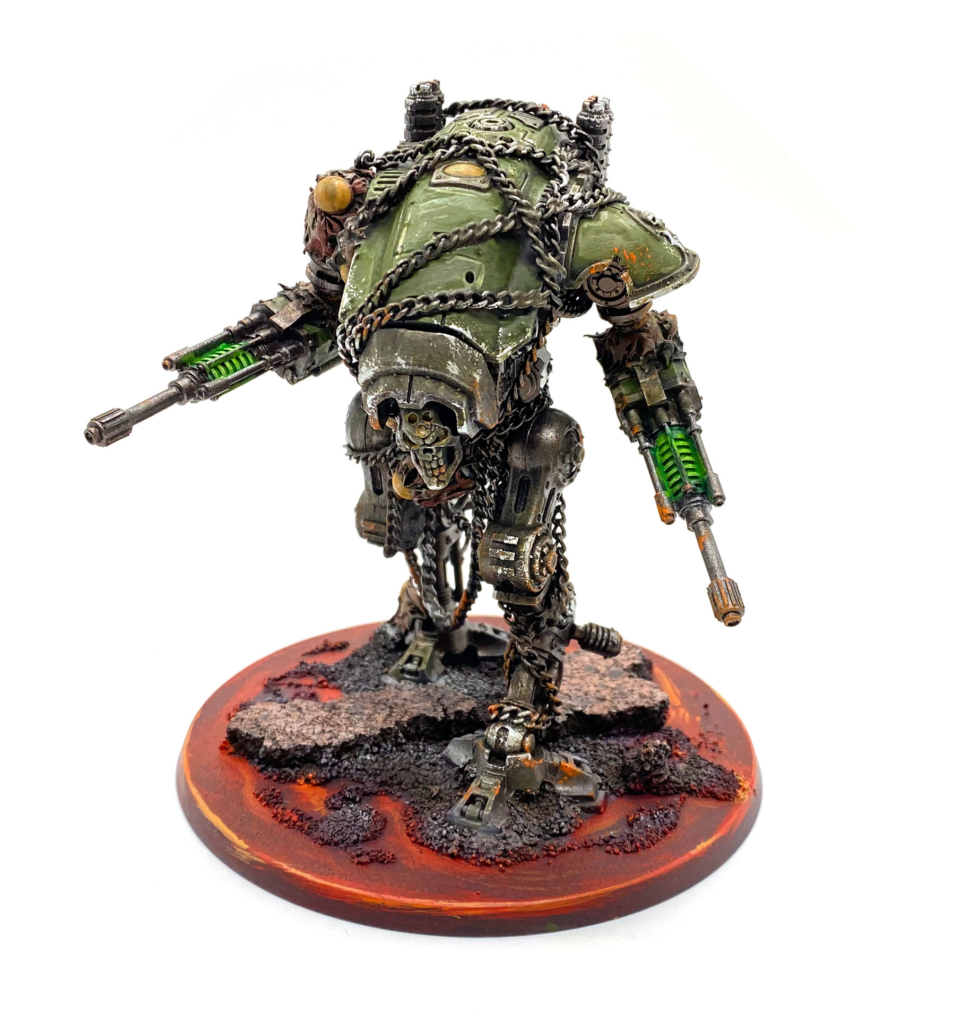 This was a fun one where I used the skull from a Great Unclean one flail mixed with a lot of chain.  I think I lost the shoulder pad too – thus the weird gooey shoulder of fatty muscle.  I love how his Skull makes him look crazed. 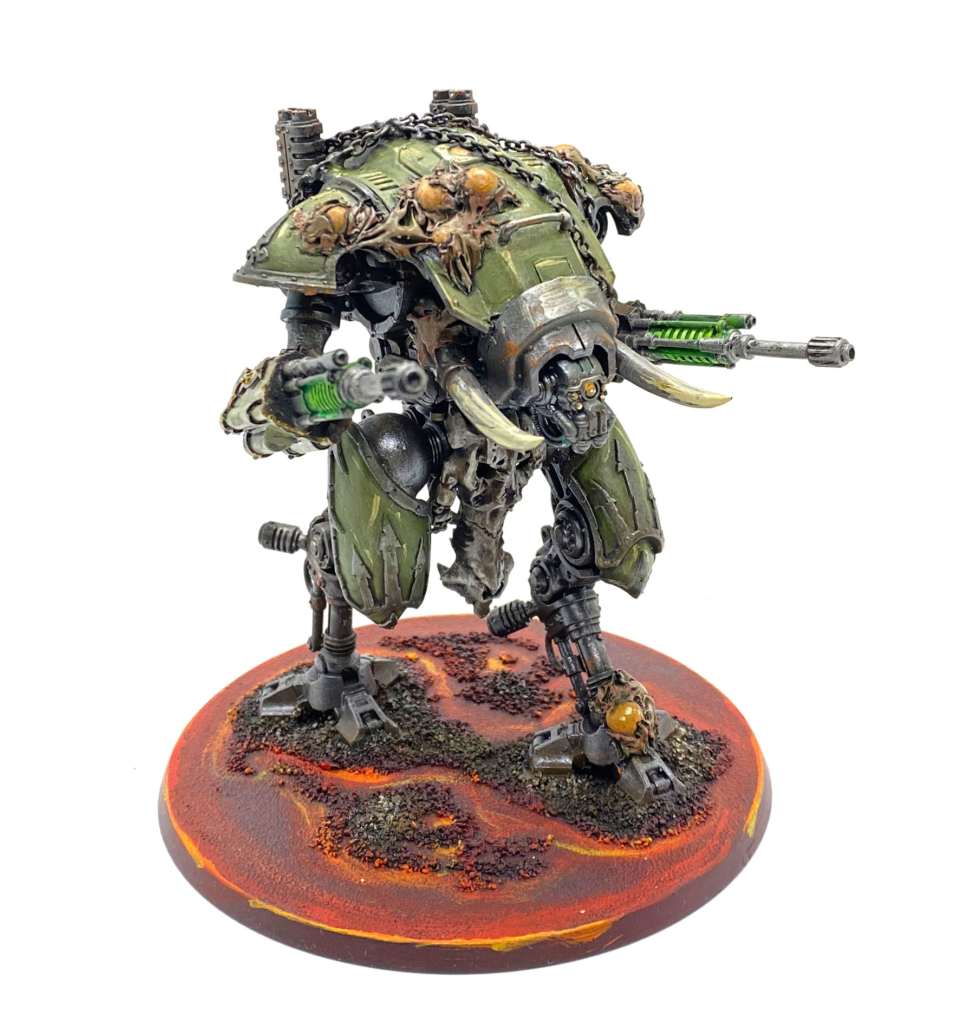 This was one of the first ones I did and thought – I got these extra Forgefiend parts – lets throw them on.  This is why he has a lot of extra parts on him like the giant horns from a Battle Wagon and the crotch skull thing from some Ogre parts.  Throw in some green stuff painted to look like weird gross silly putty and you got a chaos up’d Moriax. 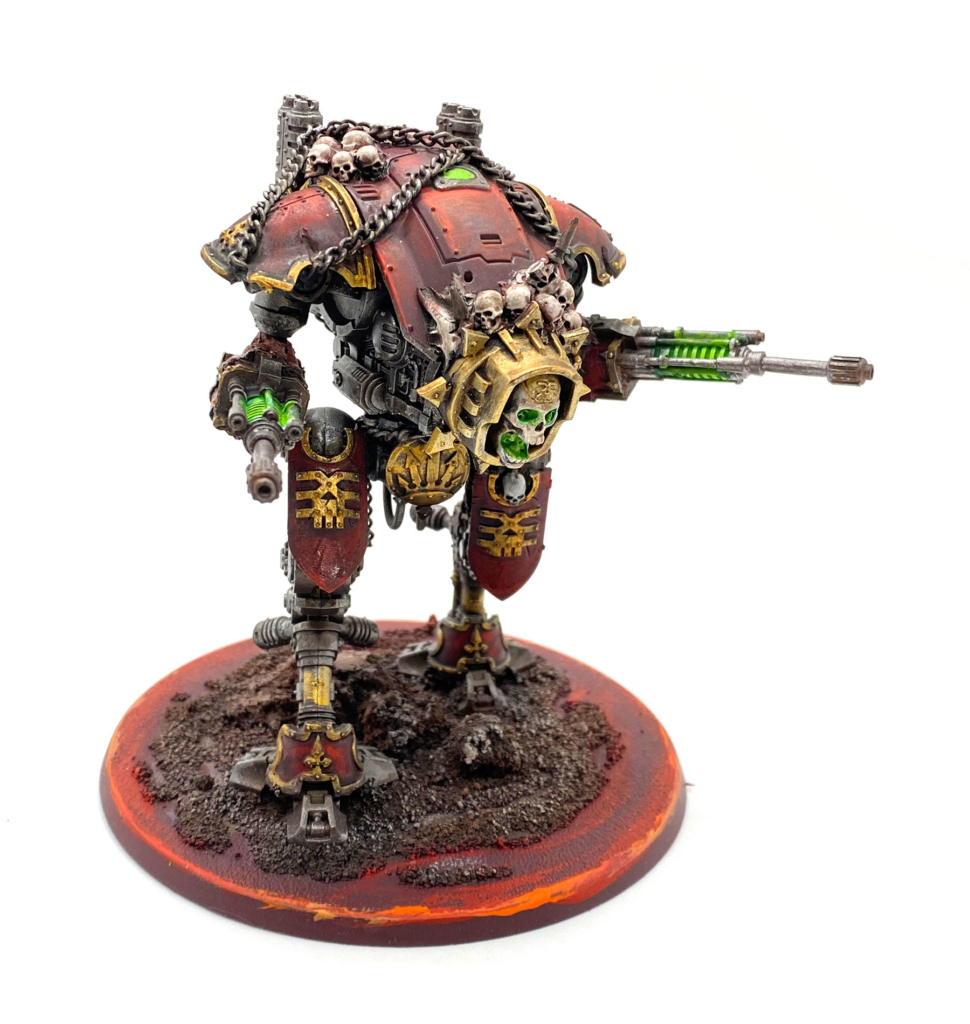 This one was due to finding some random Lord of Skulls bits for a Skull Hurler.  I thought it would make an excellent face for my Khorne Moriax.  I still love the chain and if you are looking at doing chaos stuff you should invest in a bit of it.  Throw it on a model, drop some glue into the chain bits and watch as they lock into place.  It lets you build some interesting things and help bulk up models quickly.

That is it for now – one day I will make the big daddy Knight model and Chaos it up.  I have a good guy version and think having access to the Valiant version for Chaos might be fun.

Author: Thomas / Goatboy
Thomas Reidy, aka Goatboy, the ever-evil member of BoLS. I do arts, play 40k, and even paint a lot of stuff. I have been playing Warhammer 40K since the 1990s, and have won multiple national events including Adepticon and GW GTs. I've been writing for BoLS for 15 years. Look at my Instagram to see what I am working on - or working on for someone. I am always doing something hobby related.
Advertisement
Chaos Knights Conversions Hobby Imperial Knights Painting Warhammer 40k
Advertisement 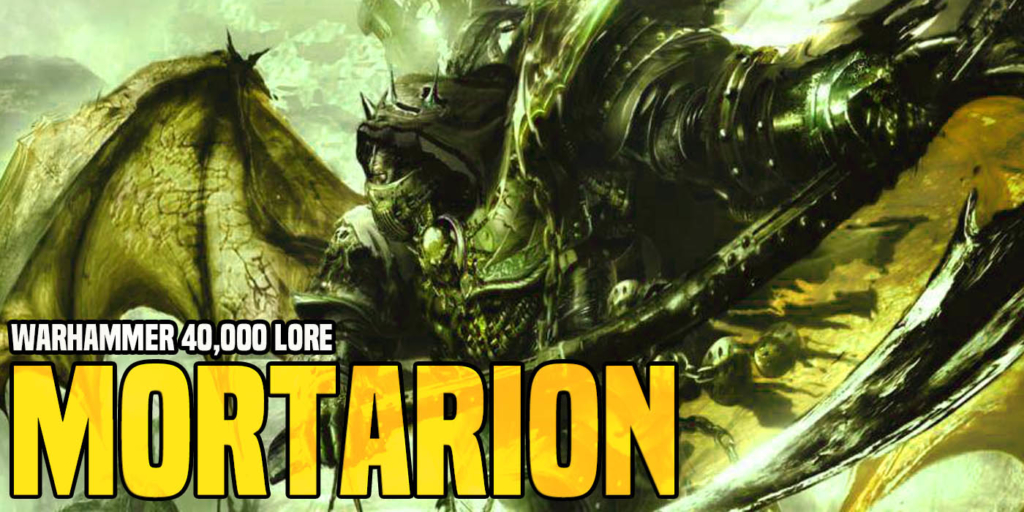