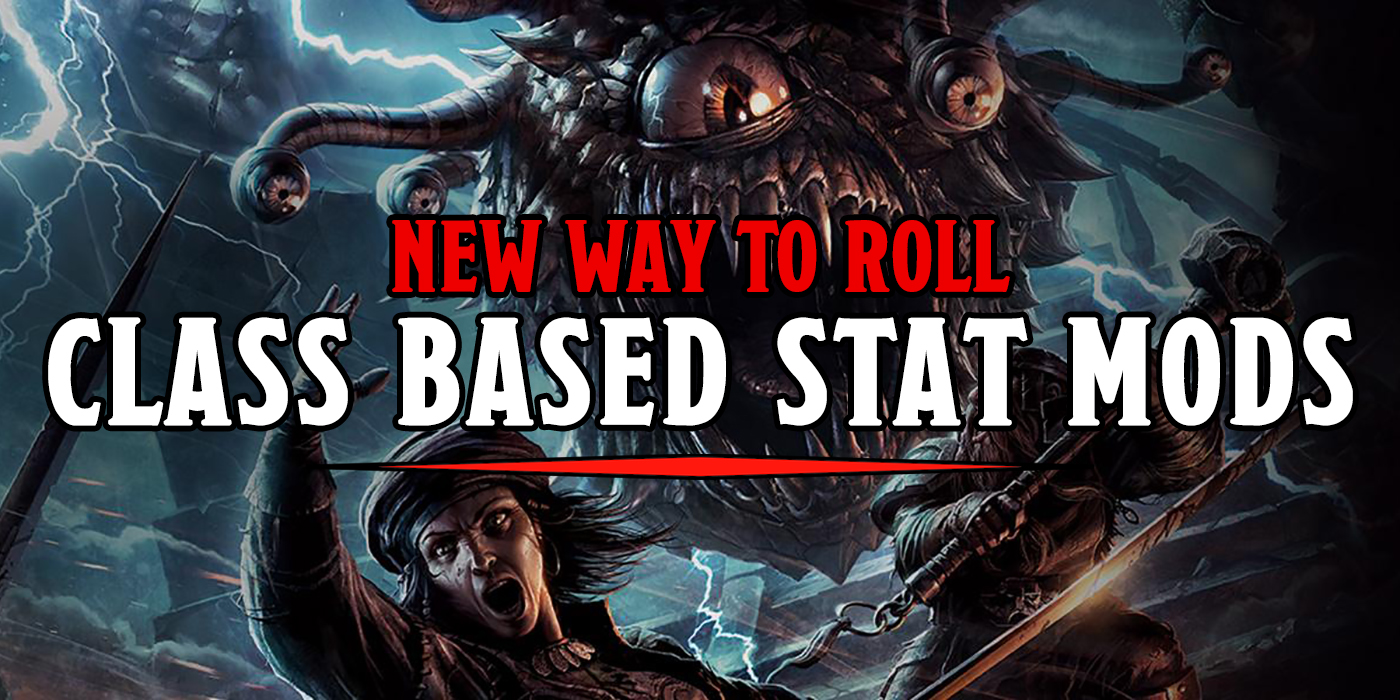 This alternate character creation system gives players a chance to build their characters with ability scores based on classes–check out these new options.

Are you looking for a new way to build characters for D&D? The 5e Class Modifier Module, by Gabriel Hicks, of Gabe James Games, is here to make sure that your Kobold Barbarians, Dwarf Rogues, or whatever other race/class combo you’d like to play is the best it can be. No longer limited by the concept of “racial ability score bonuses,” this new system offers an alternative where your stat bonuses are determined by your class–so that every Barbarian is an absolute beefcake, even if you’re a kobold.

Especially if you’re a kobold

We’ve talked before about how racial ability scores can be limiting, as have many others–and this comes at it from a mechanical perspective that lets you build the narrative you want. There’s an argument that goes something like “shouldn’t a gnome be less strong than a half-orc?” but when you look at it, there’s nothing that keeps a gnome or halfling from having 20 strength, it just takes them longer to get there. That’s where this new module comes in.

This module is made with the preference of rather than getting statistic changes from races it comes from classes instead in 5th Edition. This is to make the class choice both narrative and statistical rather emphasize that bonus through race so that a human ranger can be just as good as an elven ranger. This does NOT exist to change emphasis that certain cultures have a preference over classes, but instead to diversity it a bit.

The author stresses it’s not a correction, just a preference, and an alternative. And reading through this module, it’s just a system that allows for more dynamic character creation. The way it’s set up gives players meaningful choices to make about their character. But it’s not everyone’s style.

Many people enjoy the constraints of 5th Edition, but for those looking for a little more customization, this new system offers a window towards some more robust characters built with a specific narrative in mind. Let’s take a look at how this works for two of the different classes, just to compare.

First things first, using this system, all you’re doing is replacing the ability score increase trait from whatever race you pick. Racial abilities like an Elf’s Fey Ancestry or a Variant Human’s bonus feat still remain in play. It’s just the changes to your stats, which is done over three steps as the module prompts you to answer questions about your character. This approach grounds the game’s mechanics decisions through the personal narrative of your character, meaning you have a little bit more understanding going into the game. 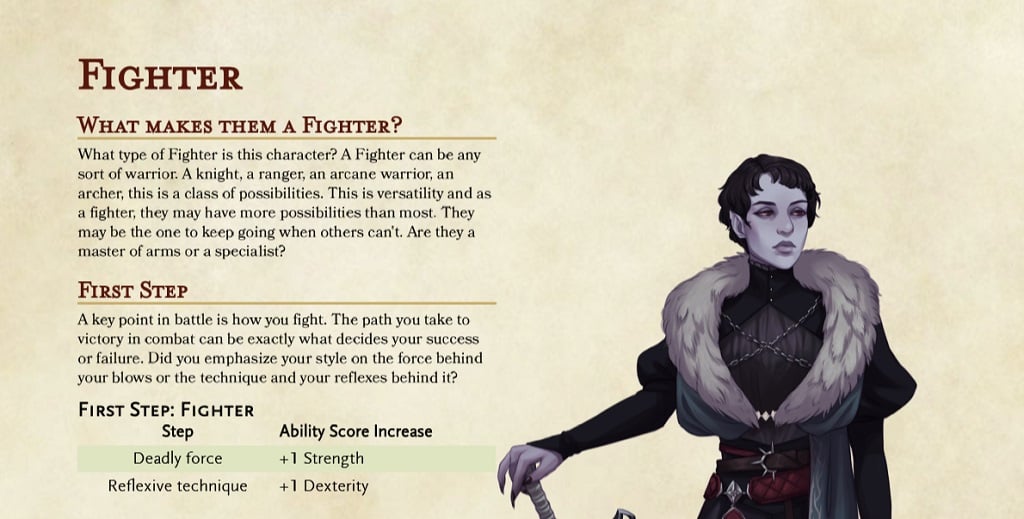 Here’s the Fighter’s approach. You start by answering questions about your fighter: what makes a fighter? Are they a master of arms, a specialist? And then it gets right into how do you fight–is it based on technique or force? That determines whether you’re all about +1 Strength or +1 Dex.

Step two asks if your character relies on their physical power to overcome obstacles, or their own endurance to get out of a troubling situation, setting players up to pick between +1 Strength and +1 Con.

The third and final step asks what you think when you face a foe with something dangerous (like poison or fire) on their weapon. Do you focus on avoiding being hit, or strong enough to resist whatever it is, giving you a choice between +1 Dex and +1 Con. 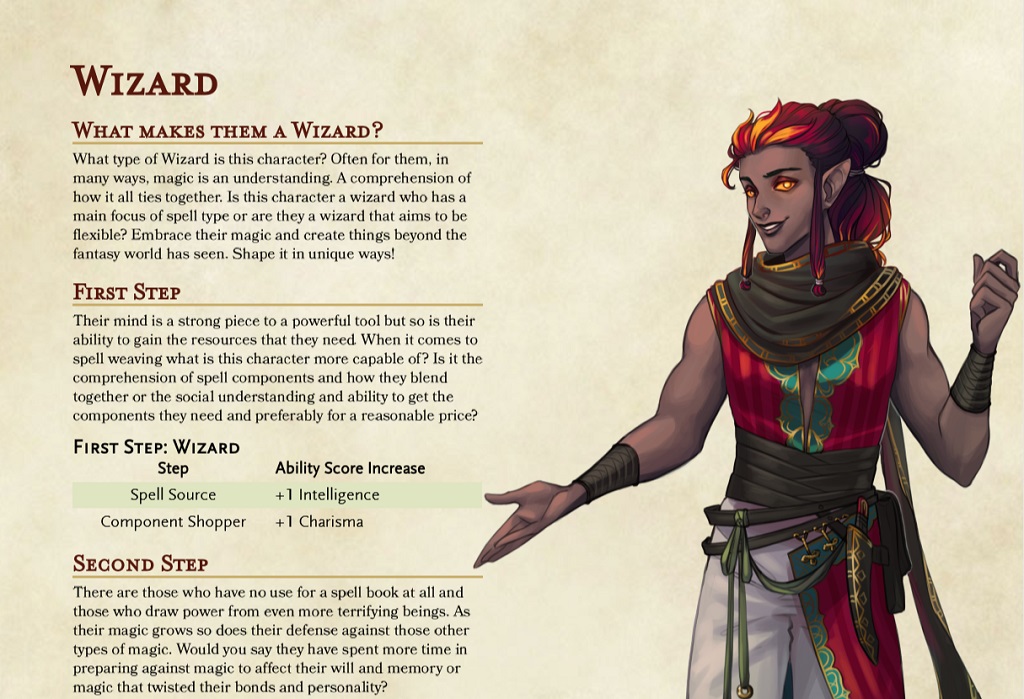 Similarly the Wizard option explores what makes your character a wizard. What is their focus and comprehension of magic? The first step asks you how your character goes about using spell components–do they focus on how the components blend together, or on being able to get what they need, giving Wizards an interesting choice between +1 Intelligence and +1 Cha,

Step two asks what kind of magic you’re used to defending against–magic that affects your will and memory or magic that twists your bonds and personality, this time shifting it to be +1 Wisdom or +1 Cha.

The final step asks what your character would do once they’ve found a new magic item: try to understand what the wisest decision is? Try to understand it? Do they make a smart or wise choice, once again going for +1 Int or +1 Wis. 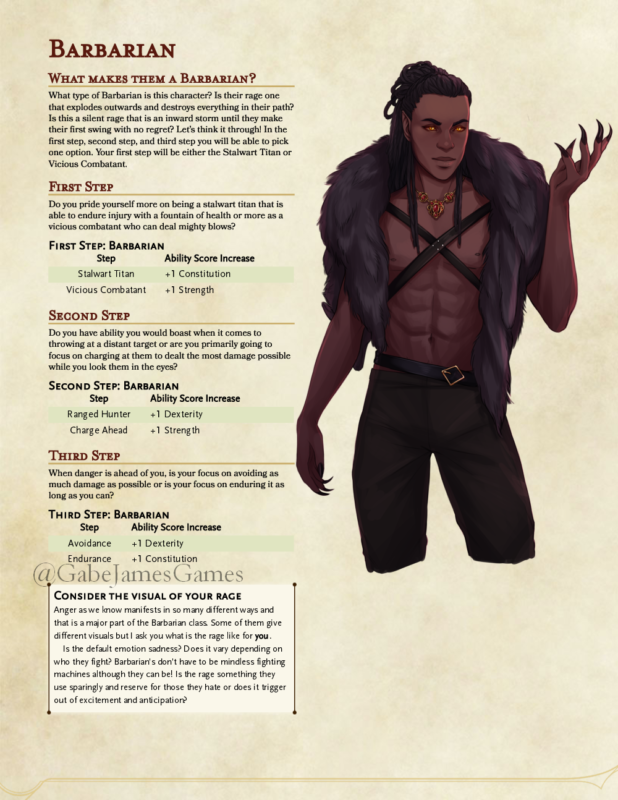 The net result of all of these is three questions that say something about your character–I’m smart, or cautious, or reckless, or whathaveyou–and either +1 in three different stats, or the ol’ +2/+1 combo that is prevalent in most D&D. The spread of stat bonuses makes for some interesting character choices. You don’t often see Wizards getting a lot out of Charisma, but a +2 Intelligence/+1 Charisma on a Wizard means that you might have some fun Warlock/Bard/Sorcerer multiclass options.

There’s a similar process for each of the classes, with gorgeous art drawn by Rachel Denton. Most of them tend to lean into common builds, Paladins focus on Strength, Con, or Charisma. Rangers are about Strength, Dex, or Wisdom. But each of the base classes (sorry Artificers) has some interesting choices to make from, and each of the six ability scores gets its day, so to speak.

You can find the project below, it’s definitely worth checking out, and it’s Pay What You Want, so now’s the perfect time to grab it. 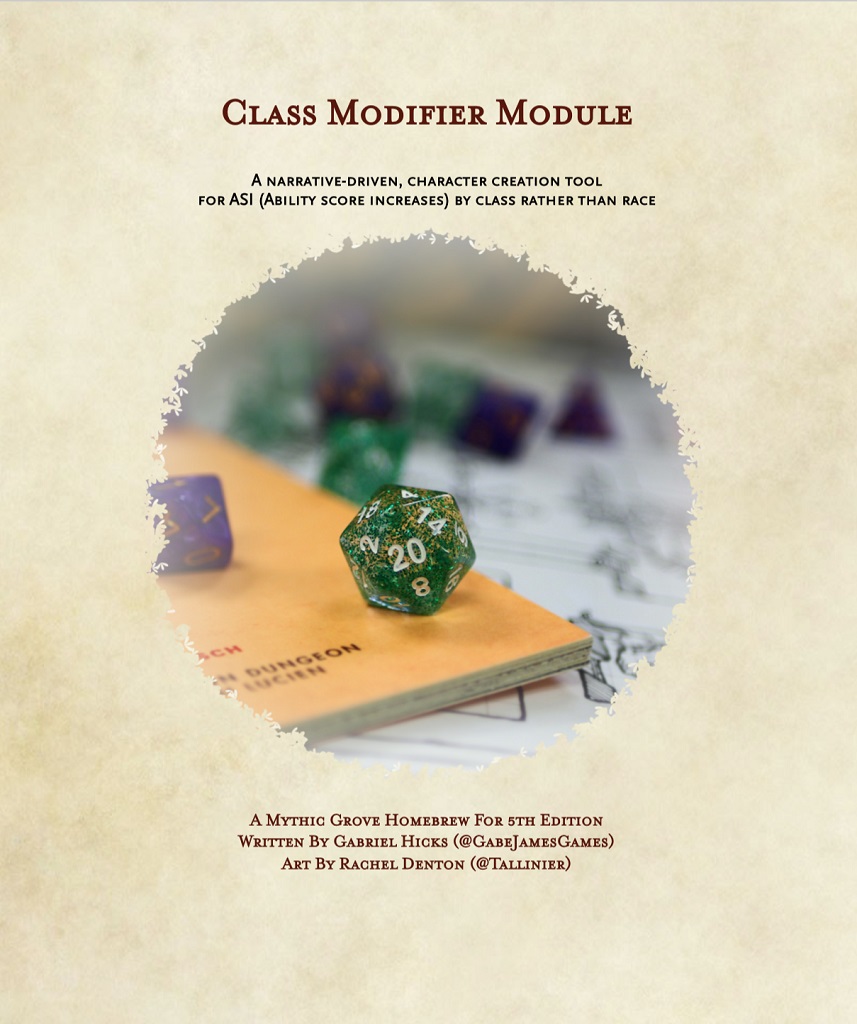 The Module has all of the base classes in 5th edition included! Artificer and the other classes outside of the base book may be done in the future.  The donations are split between the artist (@Tallinier) and I and helps get more art sooner than later! It comes in PDF form.

This module is made with the preference of rather than getting statistic changes from races it comes from classes instead in 5th Edition. This is to make the class choice both narrative and statistical rather emphasize that bonus through race so that a human ranger can be just as good as an elven ranger. This does NOT exist to change emphasis that certain cultures have a preference over classes but instead to diversify it a bit. Currently this only takes into note the base classes, but in the future I may update to include Artificer, Psion, and Bloodhunter (and potentially UA classes).

**DISCLAIMER**: THIS IS NOT A CORRECTION. THIS IS A PREFERENCE AND ALTERNATIVE.