Monster Spotlight: Air Elementals – Get Punched By A Cloud 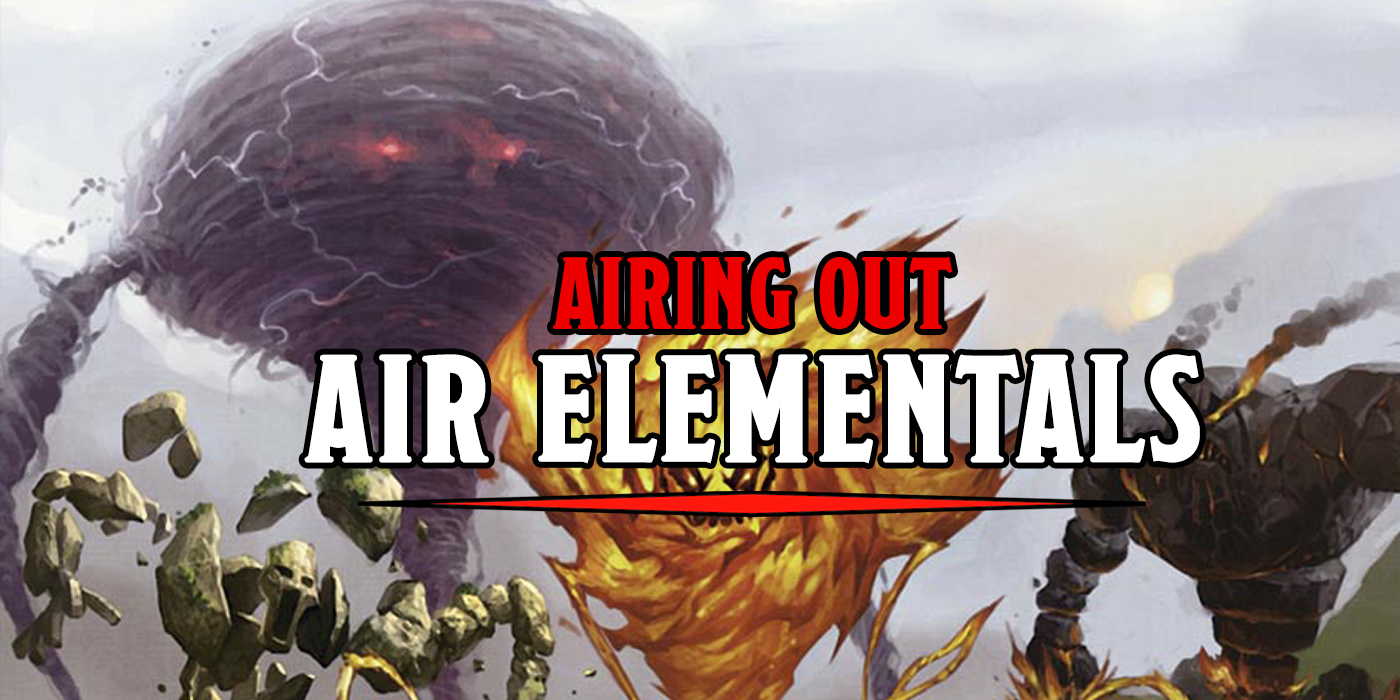 Long Ago all four elementals lived together in… wait… That’s a different thing. Today we look at air elementals, the angry tornadoes of the D&D world. 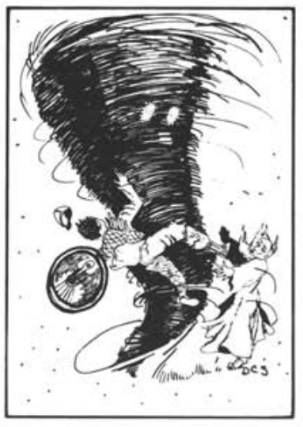 Large, neutral, and not particularly intelligent, if you you come face to face with an air elemental there’s a better than bad chance you may think you’ve encountered a run-of-the-mill not-magical tornado. Almost terrifying in their simplicity, early air elementals can have up to 16 hit dice, have +1 on hit probability and +2 on each die of damage they cause, and can shift form to become a tornado, doing up to 16 points of damage to all non-aerial creatures. An air elemental encounter would be a good time to play a flying character, but I’m not sure how many of those existed back in the 1E days. 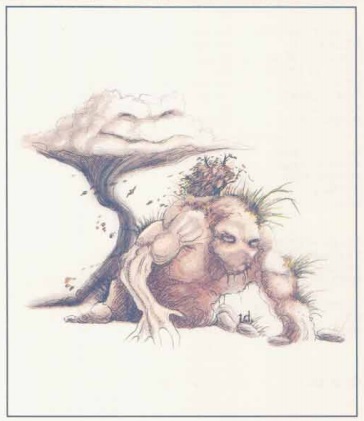 Air elementals are usually found in the Elemental Inner Plane but can be summed anywhere on the Prime Material Plane with open air and gusts of wind. They are described as looking like amorphous, shifting clouds with a language that sounds like “high-pitched shriek of a tornado or the low moan of a midnight storm.” As you can see, 2E got much more descriptive and flowery with the elementals, and I personally really appreciate that. Their attacks are also described in 2E as focused air blasts like being punched by a giant invisible fist while they’re not in their whirlwind form. You know you fog is really annoying and sometimes scary to be in? Well how about if it periodically punched you very hard? Air elementals! 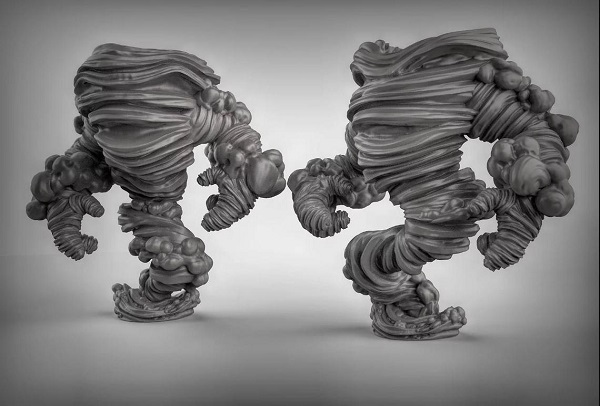 3E didn’t provide any official art for air elementals, so here are some minis you can get here to use in your next campaign.

Third Edition does two things with air elementals that I like a lot. First, providing a chart with different stats for small, medium, and large air elementals respectively. They don’t try to introduce demi elementals or mega whirlwinds or anything new, but a smaller whilrwind monster is going to be drastically different combat than a large one. The other thing 3E does is spends a lot of time talking about the air elemental’s whirlwind state and more importantly, what happens when a creature gets sucked up into the whirlwind. You adventure can’t move freely within the whirlwind but can attempt to cast spells or make attacks with a concentration check and -4 Dex respectively. There are rules to how many people can be trapped within the whirlwind at once depending on the cone’s volume, but the elemental can eject (the Monster Manual specifically said “eject”) any passengers at will. 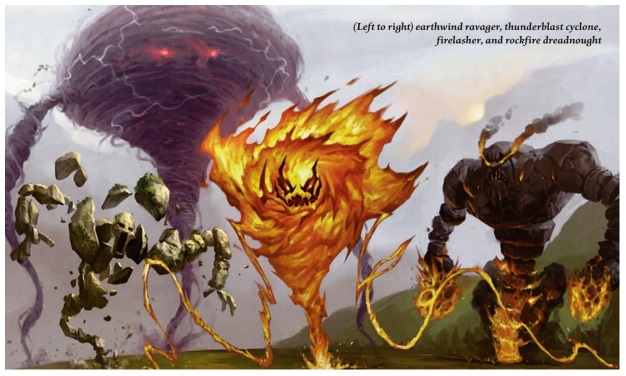 Elementals jump the shark a little in 4E as elements combine to form the latest version of elementals. There are three new elementals that include air being the Firelasher (air and fire), the Earthwind (air and earth), and Thunderblast Cyclone (air and water) and not one single element creature to be seen. On one hand, it’s a little jarring to see these tried and true creatures changed so significantly for fourth edition, but on the other lightning attacks make perfect sense for a cloud monster, and swirling vortexes of fire or rock are equal parts terrifying and very very fun to imagine. 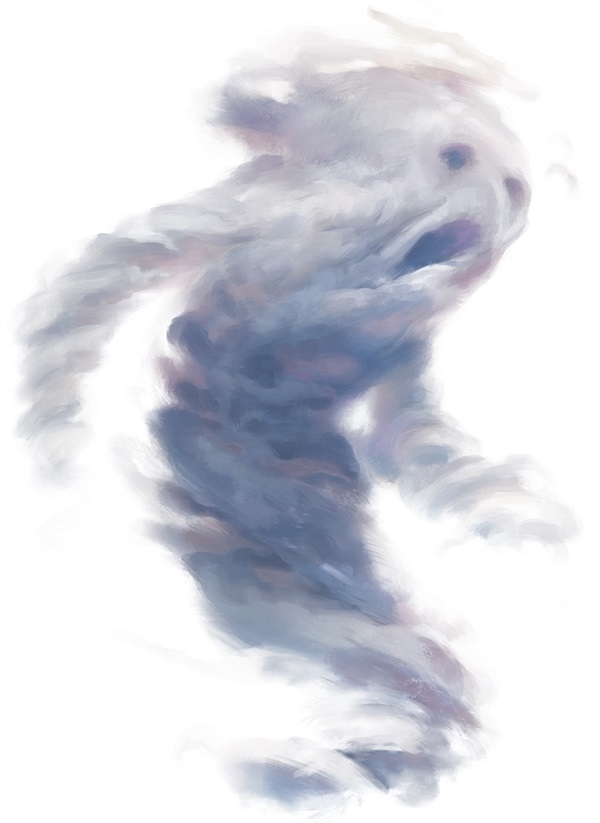 I’m not sure if I’m relieved or disappointed to report that elementals are back to normal for 5E; no rock-twisters or platypus-bears to be found. And one one hand, I’m pretty happy about that. It’s nice to get back to basics and see the elementals at their most basic. On the other though, 5E doesn’t do anything new with air elementals at all. They’re powerful but not unbeatable, they’re very fast in flight, they can punch you with air, and they turn into whirlwinds from time to time. If I may make a suggestion to any 5E DMs who want to mix it up a little – take a look at the 4E combo elementals and homebrew one or two into a game. Fighting an air elemental will be challenging and fun, but imagine it as a mini-boss before encountering a swirling angry face with lighting shooting out of it.

Which elemental is your favorite? Have you had to fight any elementals? Have you had a character get sucked up into a disgruntled whirlwind before? Let us know in the comments! 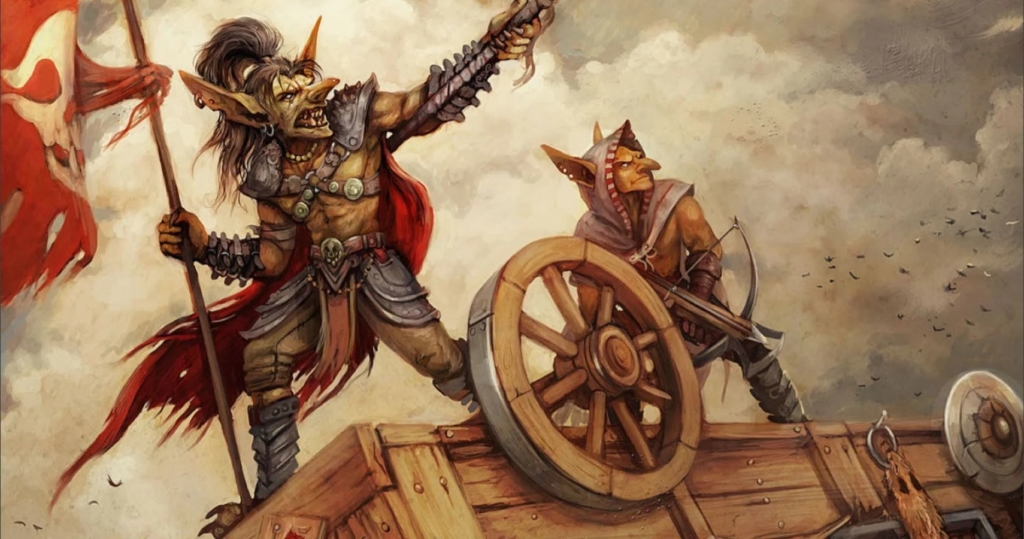