D&D: Let’s Talk About Those Mythic Monsters In The New D&D Book 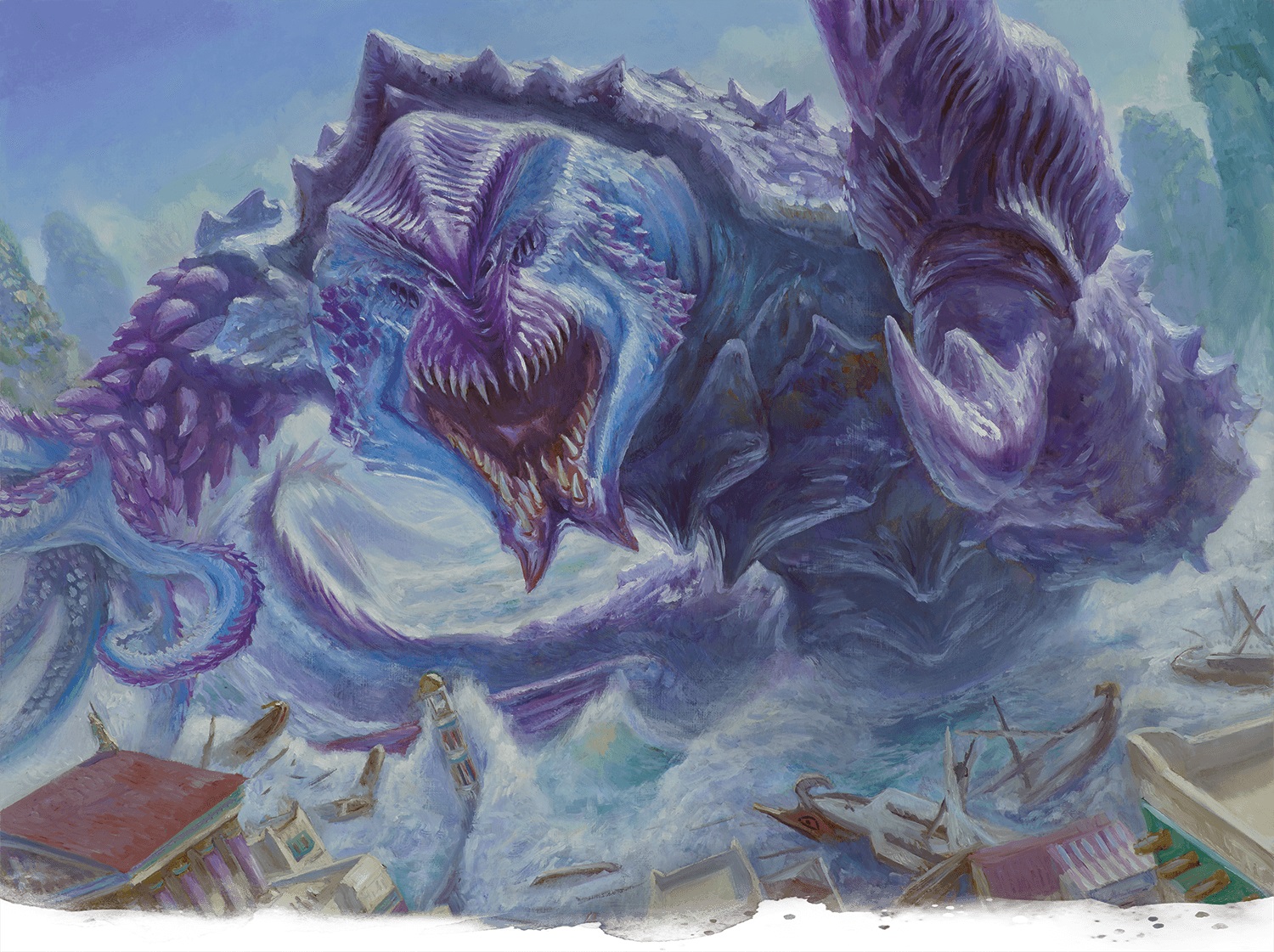 Mythic Monsters are one of the most hyped features about the new D&D book. Do they live up to it, or do these monsters fall flat?

Strap on your leather sandals, because we’re going back to Theros, this time to take an in-depth look at the new Mythic Monsters section. We only briefly touched on this in our review of Mythic Odysseys of Theros (and if you didn’t read it, this book is phenomenal, it has some bold new talent working on it and it shows, and you should probably get it) because these rules are worth looking at all on their own. 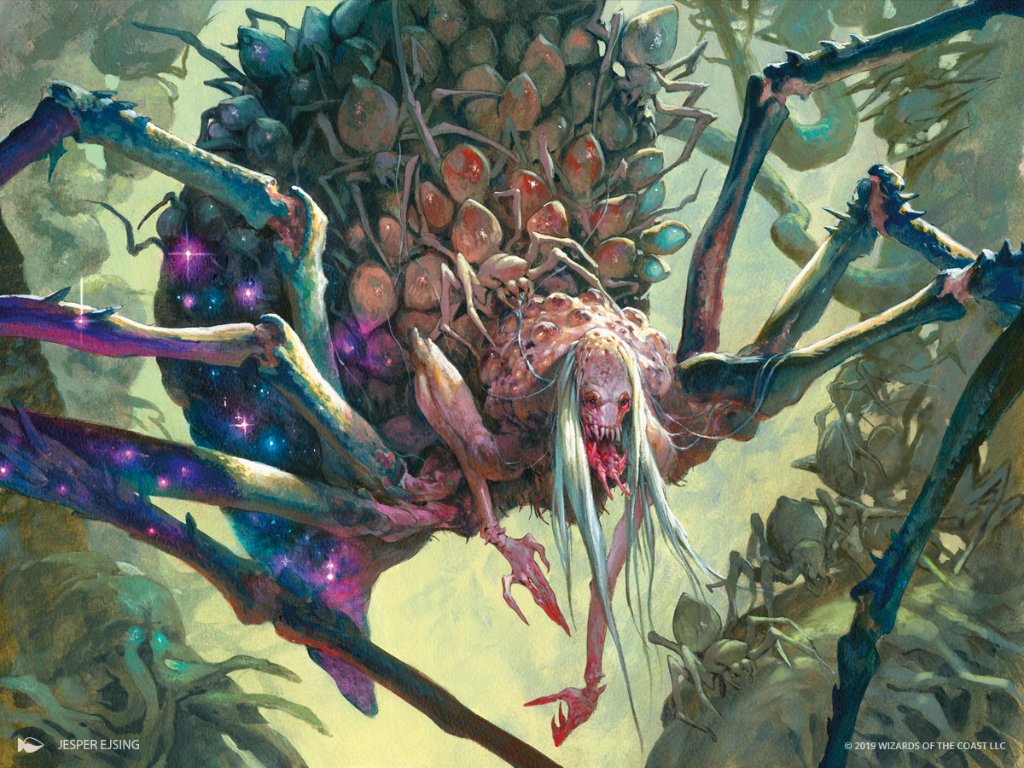 I feel like this is one subset of rules that stands out as something that could fit into any campaign. Mythic Monsters set out to provide the answer to one of the dilemmas that has been plaguing D&D since at least 3rd Edition: how do you make a fight with a boss monster feel scary and dangerous and tough? Now to be fair, there are some encounters out there that are fairly difficult–unless you roll well, or are prepared. It’s not that D&D doesn’t allow for dramatic, dynamic combats, it’s that the system rewards going ham with everything you have in the first round and not having to worry about followup.

While many of Theros’s greatest myths arise from storied terrors—like the hydra Polukranos or the dreaded titans—the monsters in this section have a feature that sets them apart: mythic traits.

Mythic traits transform battles into truly legendary confrontations, well suited to the climactic battles at the ends of adventures or whole campaigns. Mythic traits are optional; they don’t need to be used during combat with these monsters. If you so choose, you may simply ignore a monster’s mythic trait and mythic actions. If you wish to increase a battle’s stakes, though, using a monster’s mythic trait results in some mid-battle twist that changes the way the monster behaves, restores its resources, or provides it with new actions to use. As a result, the battle becomes deadlier and rages on for longer than most combat encounters. Each monster features an “As a Mythic Encounter” section that highlights its mythic trait, notes how using it changes the difficulty of the encounter and the rewards, and includes read-aloud text you can use mid-battle to signal a terrifying shift in the conflict.

As we’ve seen before, Mythic Monsters all have what amounts to two different “phases.” As the fight wears on, and the boss drops to 0 hit points, they undergo some kind of transformation that changes the way they fight. There are three mythic monsters included, and we’re going to look at Tromokratis, my favorite one. With all due respect to the endless spiders of Arasta or the serpentine skin of Hythonia, Tromokratis takes the mythic trait concept and runs with it.

This ancient kraken has destroyed whole cities, and it has the most awesome transition between phases, where the other two monsters regain their HP and have access to new abilities, Tromokratis changes the way you need to attack it. So let’s take a look at its stat block:

As you can see, when you manage to do 409+ points of damage to Tromokratis, that’s not the end of the fight. Instead, its carapace cracks open, revealing its secret weak point, and the only way to kill Tromokratis is to destroy all four of its hearts, each of which is in a different place on the gargantuan monster.

Again, you can see these aren’t your normal beasts. Tromokratis has many defenses, including the Tarrasque’s spell-resistant carapace, meaning it has advantage on saves against spells, and creatures attacking it with a spell attack roll have disadvantage–and all that’s on top of its many powerful attacks. Tromokratis makes three attacks every round, and each one gives out status conditions to targets. 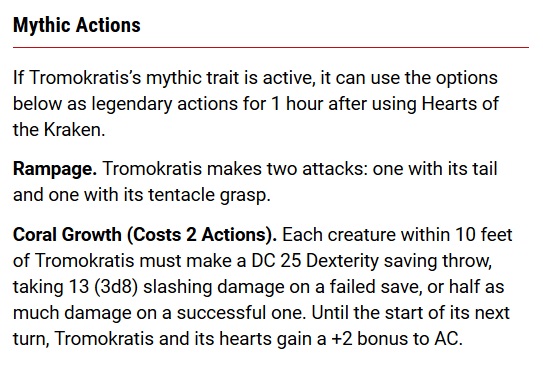 All of the mythic monsters have legendary actions, but when their mythic trait is active, they gain access to additional legendary actions in the form of “mythic actions” which let them make multiple attacks with a single action (which is paramount for a single creature challenging a party), and there might be some extra effects. Like Tromokratis’ Coral Growth here, which gives it extra AC.

All in all, these rules make for some powerful encounters. I do like that their solution is just “have them fight the monster again” it’s simple, but it’s elegant. And it’s sure to catch players who tend to go nova by surprise. But even if they know they’re in for another fight, that still ups the tension. Do you cast your powerful spell now, or try and save it for when the creature’s mythic form has been engaged?

I think this system has a lot to offer any GM, Theros or not, so get out there and play with it. 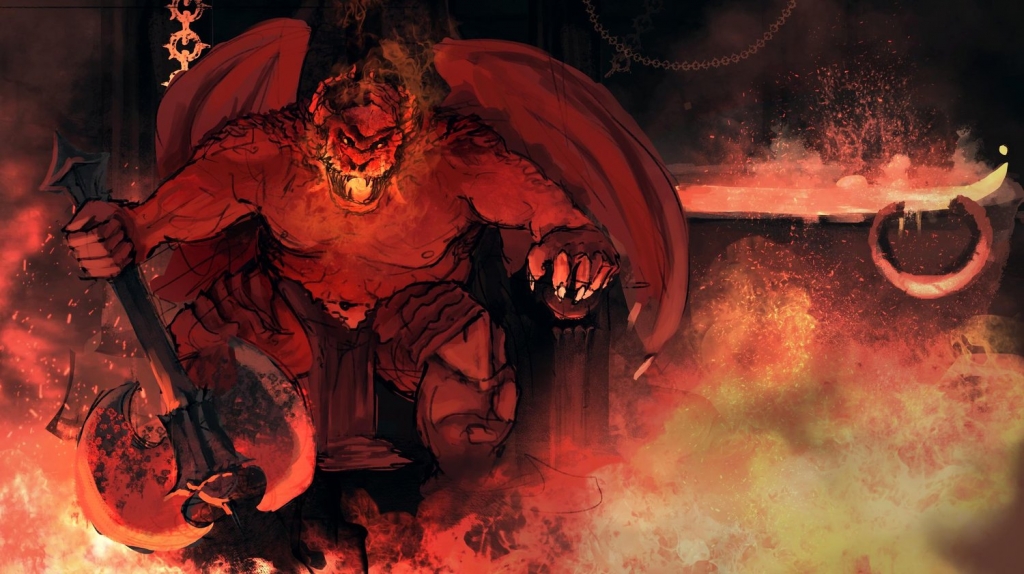