Mythic Odysseys of Theros introduces the magical world of Theros to D&D–but is this Greek-adjacent world divine? Or does it fall short of aristea?

The newest D&D book is here at last, bringing all manner of mythological mayhem to D&D. With more than 250 pages of gods, monsters, artifacts, weapons, new subclasses, new races, and a whole lot more, this is a guide to godly adventuring that wants to inspire you to play with power. Because if there’s one tone that rings true for all of Theros, whether we’re talking about the new rule options, new lore, or items–it’s heroic. Theros is a world that feels larger-than-life, which is ironic considering the “world” itself is only roughly the size of Greece. But hey, they wear their inspiration on their linothorax, so you may as well go for it. 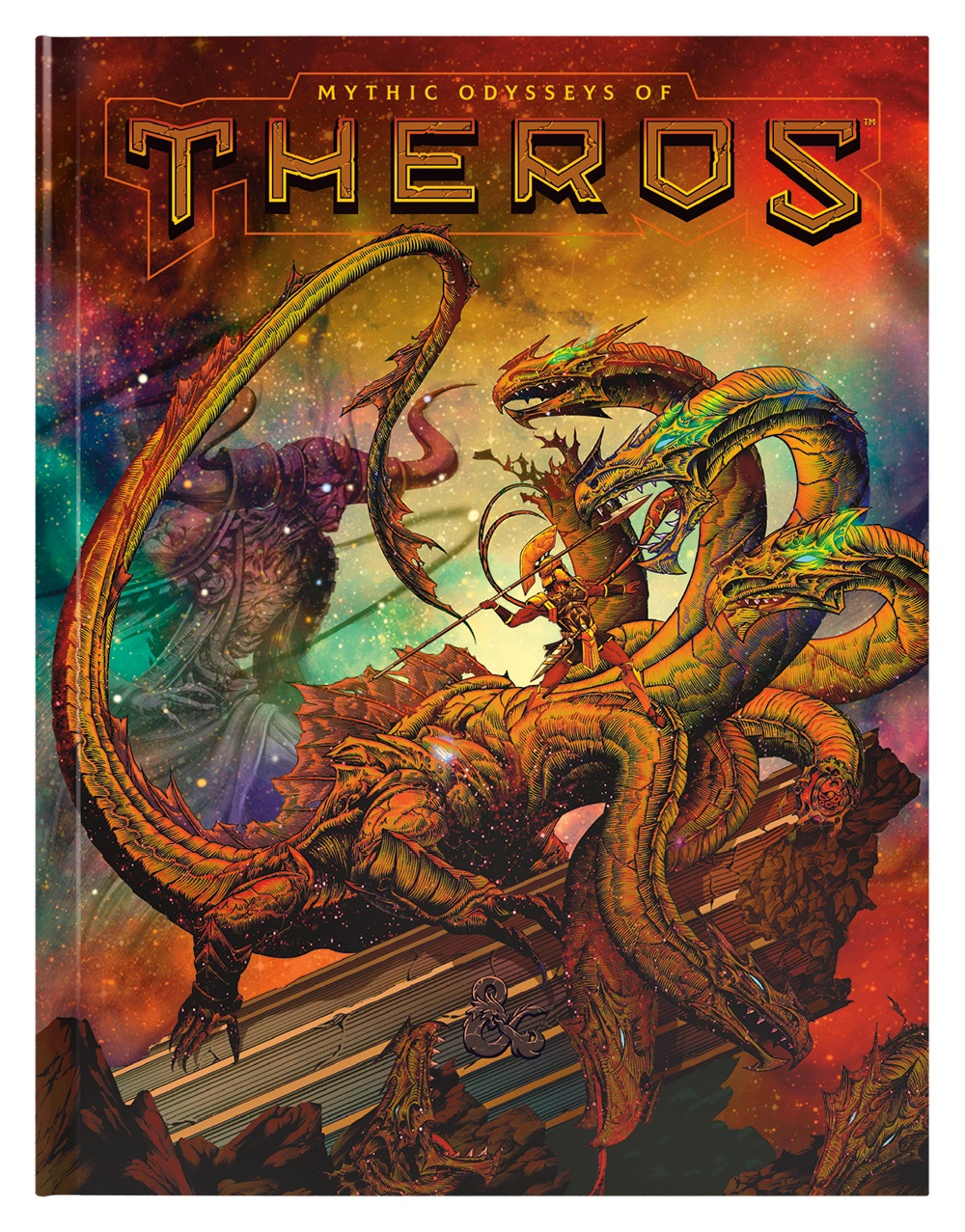 As you might have imagined from the name of the book, the cover art, or any of the books internal art, Theros is all about Greek mythology. Taken whole cloth from Magic the Gathering, Theros is a world (and underworld) that is all about Divinity & Devotion. In Theros, if you’re unfamiliar, gods strive against each other for the devotion of mortals. The more worshippers you get, the more pious your followers are, the more powerful you become.

But, owing to the pantheistic nature of Theros, worship is spread out among the many people, who decide what they need and when. Which means that sometimes the gods play dice with the universe, and more specifically sometimes they play with your life, pitting heroes and champions against demigods and magical beasts of legend as they vie for power. 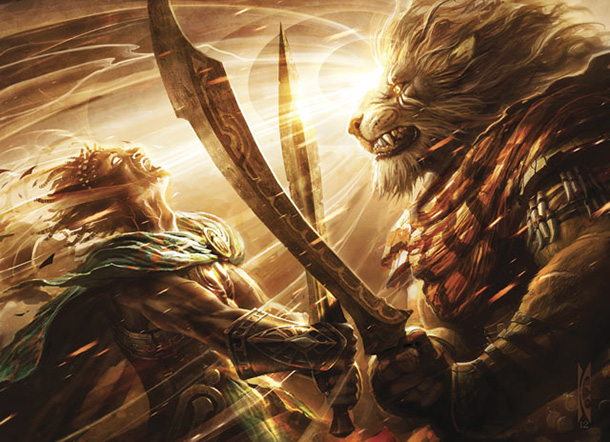 So that’s the theme of the world. Which I mention here because Theros goes hard on its theme. Where the Guildmaster’s Guide to Ravnica blended the guilds that made up its world into the very fiber of its rules–taking the ‘renown system’ from the DMG and making it into something that’s not just functional but fun to use–Theros does similar for gods. Deities are at the heart of this world, and even if you’re playing in your own setting, if you’re looking for ways to bring the gods in besides the occasional “you get a quest” or answering a Cleric’s question–and more importantly WITHOUT them dominating the spotlight–then you’ll want to check out Mythic Odysseys of Theros.

You can see it in the new player options. This is a campaign setting that wants you to be heroic from level one. Theros has no time for fighting three goblins at level one. We’ve all been there, played that. Instead every character in a Theros campaign gets a Supernatural Gift, 8’o clock day one. Supernatural Gifts are some kind of aid that might be a gift from the god, or from some other magical being like a Sphinx or an Oracle, or maybe you were just born under a supernatural condition. Whatever the case, these Supernatural gifts give you extra features that can drastically change your character. 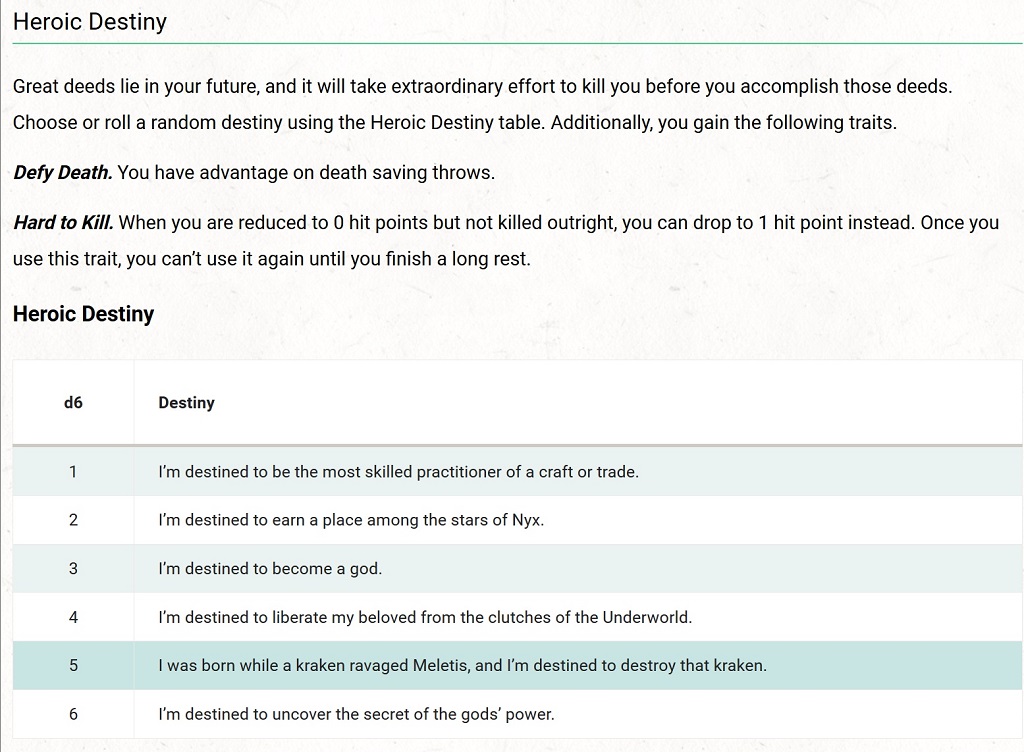 We’ve posted two different ones here, but what really stands out about each of these is not just the benefits they confer, but the story they tell. Being born to a Heroic Destiny makes you hard to kill, but it also comes with a built in overarching quest that you’re on. Playing as a Nyxborn, you might be an incarnated dream and have resistance to necrotic and radiant damage, but you also have a deeper connection to the world as the result of your origin. 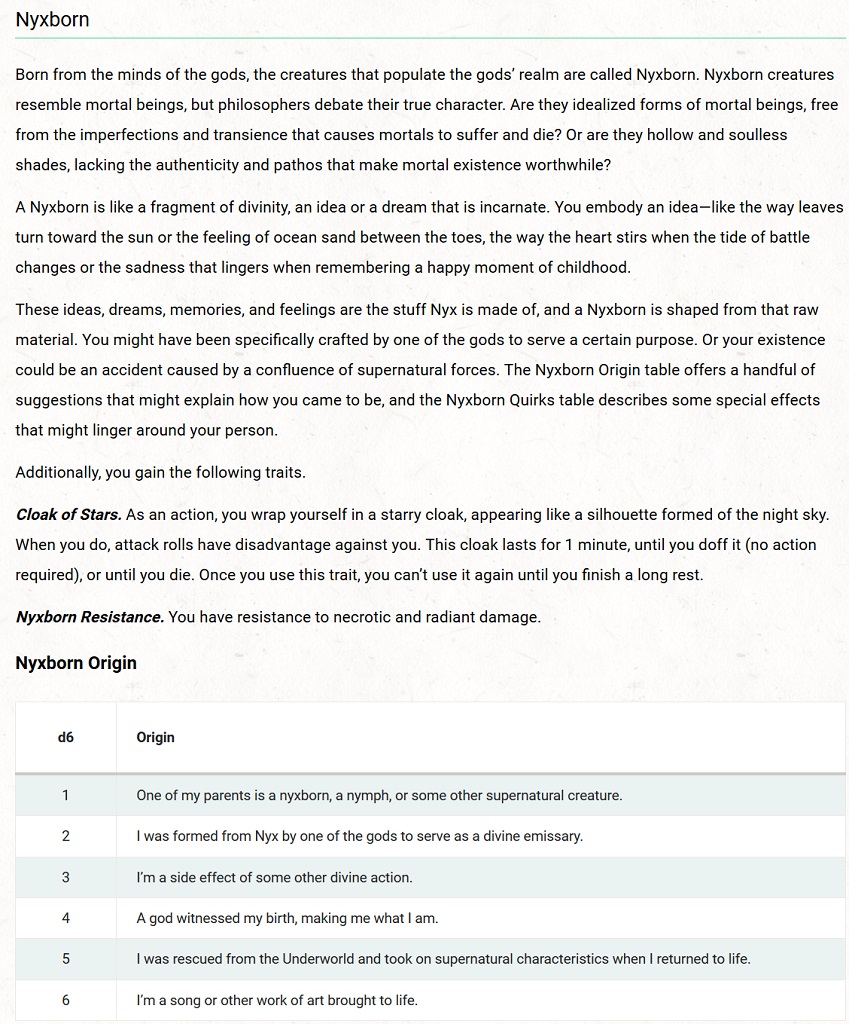 Two of the supernatural gifts: Oracle and Iconoclast play with the new piety rules, which are an expanded set of rules that define a character’s relationship with a chosen deity. In Theros, the gods are not omnipotent, nor are they omniscient, but as a result, they are much more active. Which means when you show a god or goddess devotion, you gain piety. You pick a patron deity, per usual, but then as you perform deeds in the god’s name, or observe the right kinds of rites and sacrifices you gain piety points. A devotee of Ephara, the goddess of cities, for instance, gains piety when they expand the god’s influence in the world through actions like:

Similarly, if you take actions the god finds abhorrent, you lose piety. In Ephara’s case: 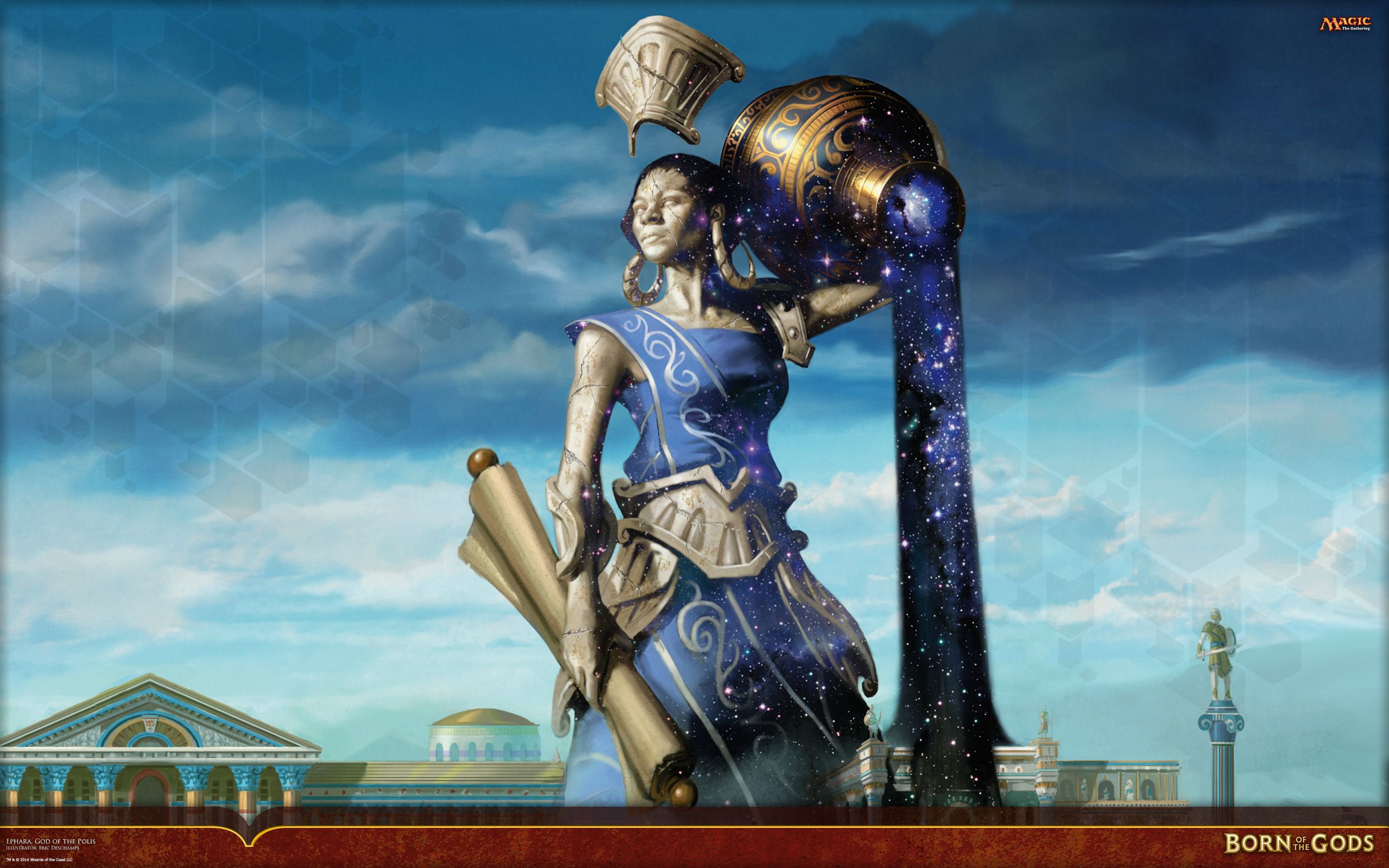 Why would you care about any of this? As you gain Piety, your character gains fabulous secret powers. In Ephara’s case, once you have Piety 3+ you can cast comprehend languages up to your Intelligence modifier times per day without using a spell slot or trait.

At 10+ you gain advantage on Charisma checks while you are within a city, and can reroll failed Intelligence checks.

At 25+, you are a Disciple of Ephara and can cast Mordenkainen’s private sanctum once per day.

I like that this system tries to include consequences for your choices. And that it’s not based on broad ideals like “good” or “evil” which you might argue about at the table for hours. Is it evil to kill the goblin prisoner, even if you know it will escape and raise an army to burn down the town, is it good to punish someone who steals, even if it is just to feed their family. And so on and so forth.

Instead, piety rewards you based on your deeds, not your intentions. It lets the DM play with tension too–how devoted are you to Ephara? What will you do if you find success in your grasp, but you must betray one of Ephara’s core principles to do so? How does that affect you?

Epics are told about people who gain and lose the favor of the gods. And this system seems to be set up to encourage that style of play. But where the Guild system from Ravnica was pretty laid back, this one is a little more fiddly. You have more to keep track of, because the Guilds were more about how you’d structure a quest or a character’s position in the world, this is more about how you respond to events. 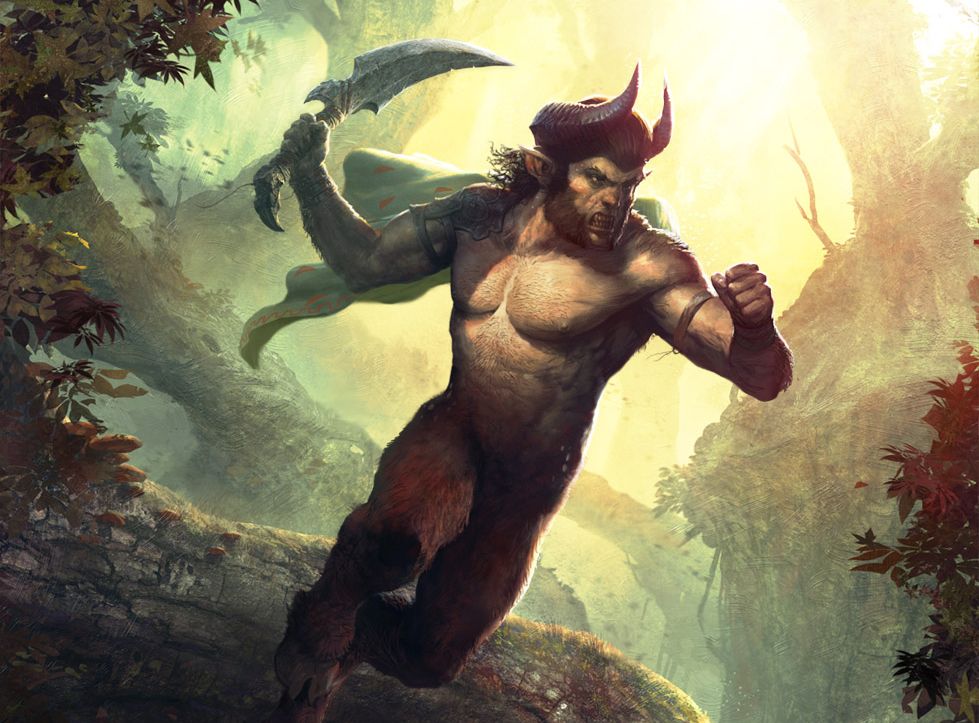 It depends on the DM a little more than other rules, is what I’m saying. But that’s what a lot of the book is like. The new races feel the same way. For instance, Satyrs come with magic resistance and count as Fey which leads to some interesting shenanigans, but it can also be abusive if you have a player looking to optimize on it.

Even so, the world of Theros feels rich. It’s not exactly Deities and Demigods, because this book is about how gods affect every part of the world, not just the clerics or paladins. It talks about how a god might take an interest in a fighter, how they might influence a quest. It’s a really cool paradigm for the world.

DMs will enjoy the guidelines for creating adventures inspired by gods who try to meddle in mortal affairs. And it has some of the BEST advice for handling divine intervention I’ve ever seen:

Don’t eliminate character choice. The gods can tell characters to do things, and even threaten to punish them if they don’t do things, but the gods can’t control mortal actions.

Don’t eliminate risk and danger. The intervention of a god should never guarantee success or victory, nor should a god’s interference portend immediate defeat. Gods can act to change the balance of an encounter or offer an avenue of escape, but they count on their champions to be heroes and act accordingly.

Mythic Odysseys offers DMs a number of ways gods might communicate, outside of just the usual spells. If you’re looking to make your world feel mythic, this book does fantastic. It is all about the feeling of playing in a world that’s more magical than standard D&D, which is saying something because there are literal wizards in base D&D. But here you can get signs from the gods (thanks to some helpful lists of omens), or receive a quest directly from a divinity.

There’s an excellent section on building adventures and, indeed, whole campaigns based on a particular god. I love the chapter on building a gods heroes and villains, it gives you a lot to work with. But you have to actually do that work. The section on running adventures straight out of epic tales–whether a nautical odyssey or a journey into the underworld–are some over the top works of art. And Mythic Monsters deserve their own article, so be on the lookout for some more in-depth rules coverage in the coming days.

For now though: is it good? Yes. This book is phenomenal. I think this book does what every good RPG does, it makes you excited to get out there and play. The rules are a little more subjective than I was expecting, but I love it even more. This book doesn’t care about balance or what’s optimal. It wants you to have fun. It wants you to be excited. As you read through it, you’ll come up with a million ways to feel heroic and have awesome adventures, and that’s a style I’m all about. So if you want to check out something that can make your games feel more heroic, or if you love a world inspired by Greek-ish myths, you’ll definitely want to grab Mythic Odysseys of Theros.