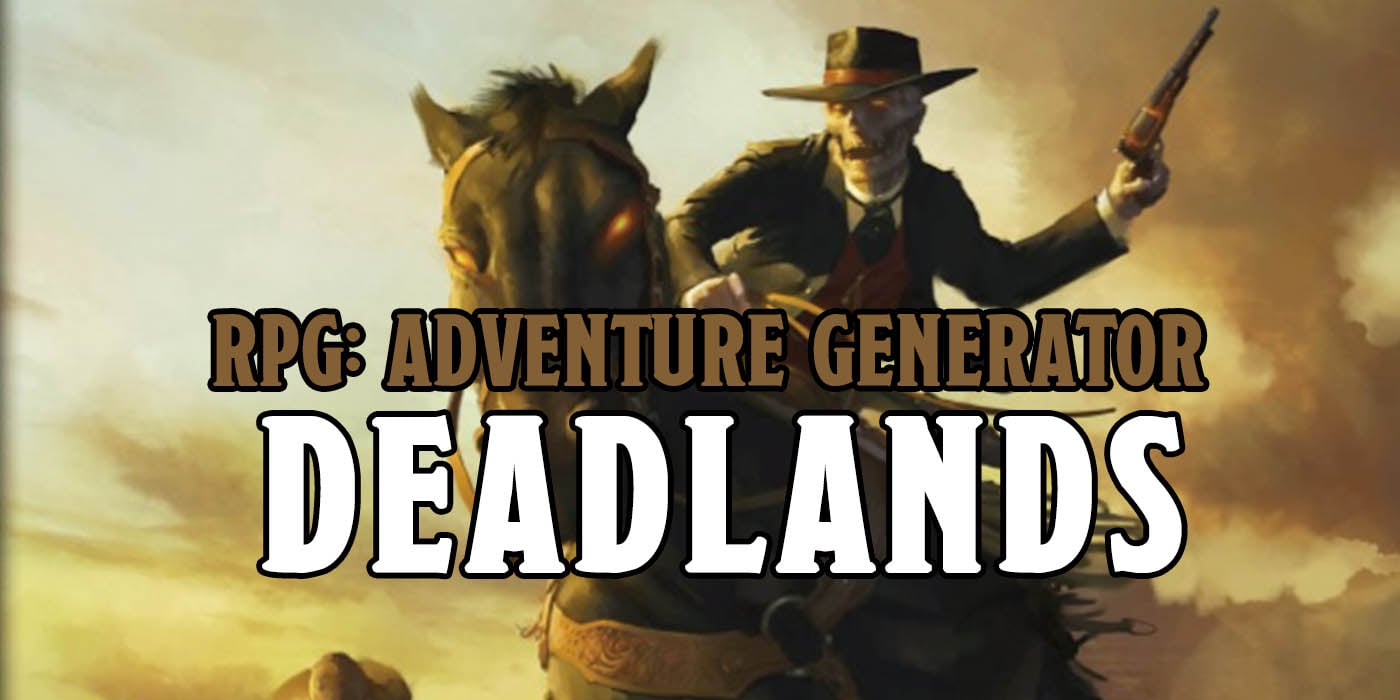 Have you ever wanted to go on an adventure in the Weird West but weren’t sure how to get started? Just draw some cards, partner.

Deadlands is a Weird Western RPG setting and it comes from the Pinnacle Entertainment Group. It recently wrapped up a successfully funded Kickstarter. I just so happen to be one of those backers. Excitedly, I’ve been going over the prerelease PDF of the Deadlands core book and I’ve been really pleased so far. 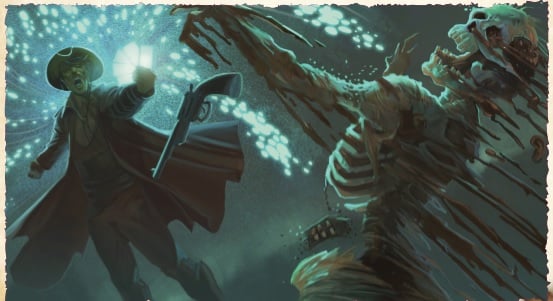 After devouring the lore and backstory of the setting I’ve started to get the itch to run a game for some friends. But, because the setting is so open and plot hooks are abundant, I wasn’t quite sure where to start. The good news is that the book has a really intuitive Adventure Generator to help you get the story beats flowing. Keep in mind that this comes from the prerelease and are subject to change.

The Adventure Generator isn’t going to do ALL the leg work for you – it’s designed to get you pointed in the right direction. It’s got a basic structure for an adventure setup and some prompts to get those creative juices flowing. For me this is probably my biggest hurdle and therefore this generator is the biggest help. Oh, and while this Adventure Generator is designed for the Deadlands setting, it could be used for any game system. 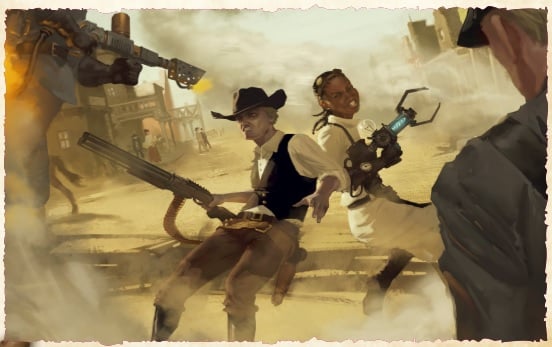 As far a setup all you need is a deck of cards (which is quite fitting). You’ll also need to have the book which, hey – go back it or wait for it to be in your FLGS. From there, the generator is broken down into 3 parts: Objective, Obstacle, and Complication. All you’ll need to do now is draw a few cards…

As an example of this exercise I drew 3 cards. They were (in order) : the Jack of Diamonds, the Jack of Clubs, and the 2 of Spades.

Each section has a chart that you’ll reference. Because this book isn’t finalized (or in print yet) we’re just using some snippets. But these examples should give you a basic overview of how it works.

This one is pretty straight forward. It’s the reason for the adventure. Your first card drawn is for the Objective. The suit of the card determines how the players get drawn in while the value determines the objective. So my first card was the Jack of Diamonds.

Based on the chart, the hook is Work for Hire and the objective is Book Learnin’ – I’ve already got ideas swirling in my head now. We’ll get back to that after our next card…

Obstacles are, well, the thing things in your player’s way. They could be organizations or particular persons – they are the adversaries or hazards to give your players a little competition. As a note, you could draw multiple cards for Obstacles and/or Complications…but keep that in your back pocket for a later game.

This time around the suit of the card which of the Reckoners* are working against your players and the value is who or what they are squaring off against. My card was the Jack of Clubs.

So the obstacle is coming from the Reckoner War and it’s a band of Outlaws. That seems pretty fitting. Again, between the Objective and the Obstacle, I’ve already got a story forming in my head. Maybe these Outlaws are being influenced by War to stop the players research. That could explain why they are openly hostile and on the warpath. On to the last step.

This is the monkey wrench in an otherwise simple storyline. The suit is the general nature of the trouble while the value is the specific problem. My card was the 2 of Spades.

Well now, that is certainly a complication. We’ve got a Nemesis (either a new one or returning) and the Mistaken Identity complication…This could be fun!

Now that you’ve got your 3 parts, it’s time to mix them and come-up with the adventure. This is where you, as the Game Master (or Marshal) get to exercise your brain. It’s also where you get to put a personal spin on the entire adventure. For me, I’ve now got a basic plot for the entire session and now all I need is some encounters – which hey, there are also some handy tables for those, too!

So what’s the adventure? It pretty much wrote itself:

“The Posse has been hired by a group of researchers as bodyguards. The researchers are looking into some of the side effects of Ghost Rock but have been threatened by a local gang of outlaws to stop. When the players arrive the outlaws mistake one of the players as the head researcher and becomes the new target.” 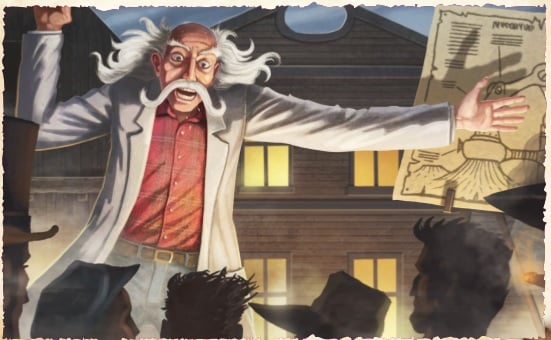 “With the right amount of Ghost Rock I think we can hit 88 miles per hour!”

As this would be the first adventure, these outlaws would actually become their new nemesis and could kick-off a whole side arc of a recurring villain – or villains. Is it simple? Yeah. Is it done? Not at all – there is a lot of work left to do, but the basic prompt is there. Now it’s just a matter of adding some meat and potatoes to this one. But as a launching point it’s exactly enough structure to build more. Heck, you could even take those same examples and come up with an entirely different adventure hook. That’s the beauty of it!

I’m still digging through the Prerelease PDF – but I can’t wait to kick off an adventure in the Deadlands setting!

*The Reckoners are essentially the personification of the Four Horsemen of the Apocalypse. They are the “Big Bads” of the setting.

Author: Adam Harrison
Writer, Editor, Texas Native, and Austinite for 15+ years, Adam covers all things Tabletop Gaming. Which includes Warhammer 40,000, Age of Sigmar, D&D, Board Games and everything else that involves dice, boards, cards and a table. A hobbyist, player, and collector of miniatures and games, Adam's current obsession are his Death Armies for Age of Sigmar, his Blood Angels and Tyranids for 40k, and his ever growing Arkham Horror: The Card Game Collection.
Advertisement
RPGs Rules
Advertisement 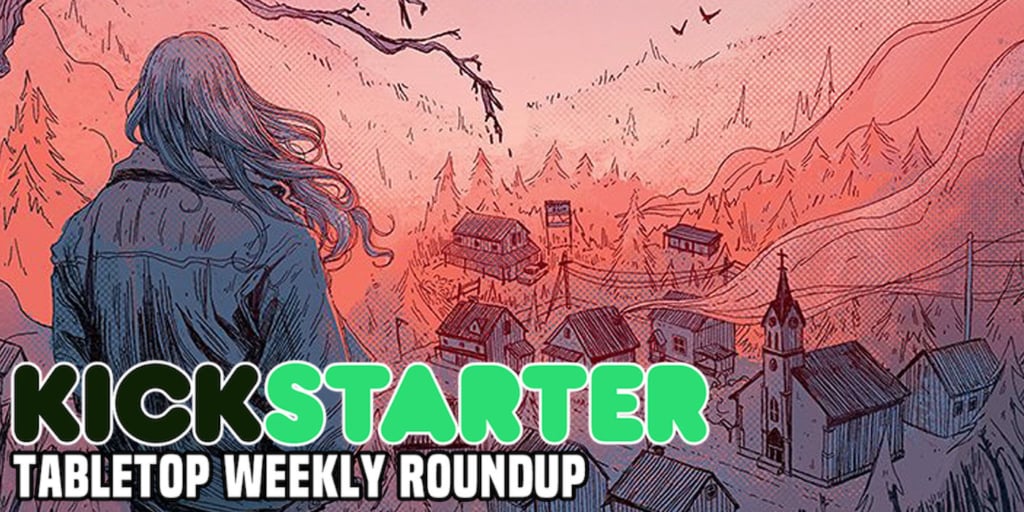