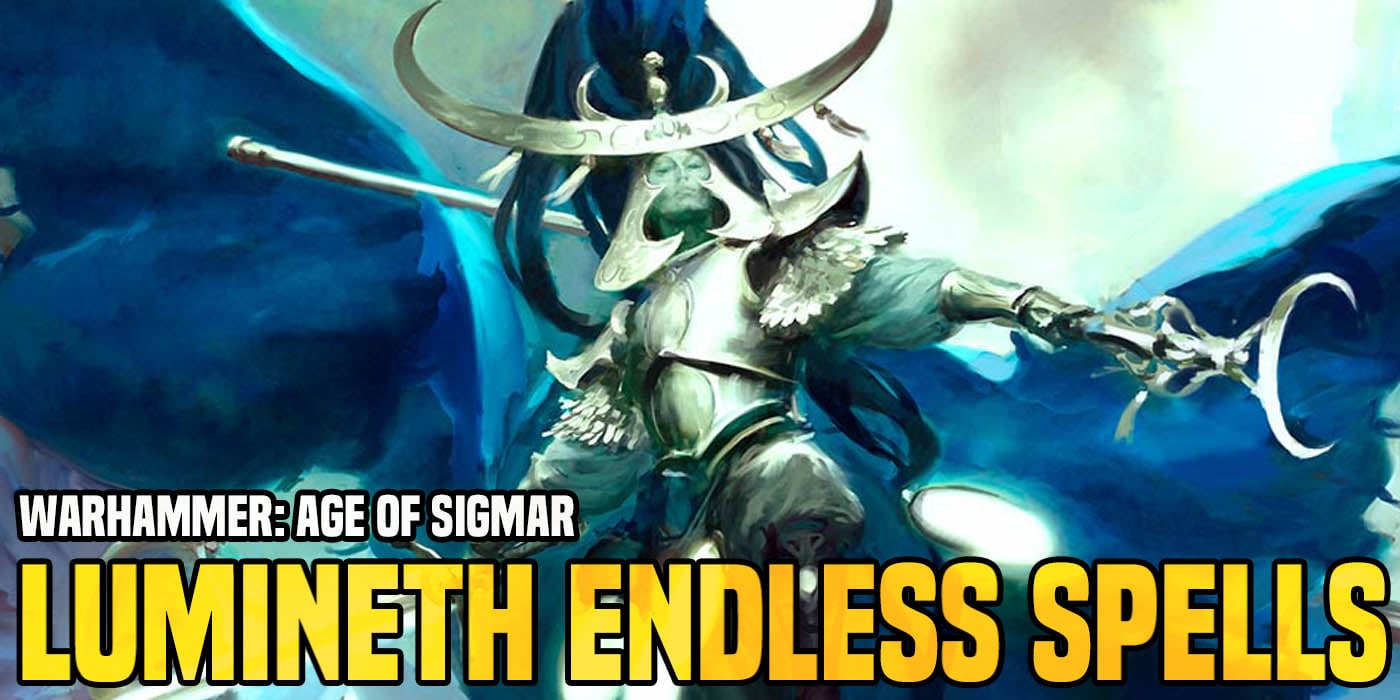 Here’s my thoughts on the Lumineth Endless Spells.

With an army created by the mighty Aelvish archmage himself, you can expect that the Lumineth Realmlords bring some pretty snazzy endless spells to the table, and you’d be right. The magic of Hysh is pretty snazzy, and the endless spells the Lumineth are packing reads a lot like an army of magical zen warriors conjuring the spirits to help them in battle. So here’s my thoughts on the Lumineth Endless Spells, and how I think they will perform on the field. 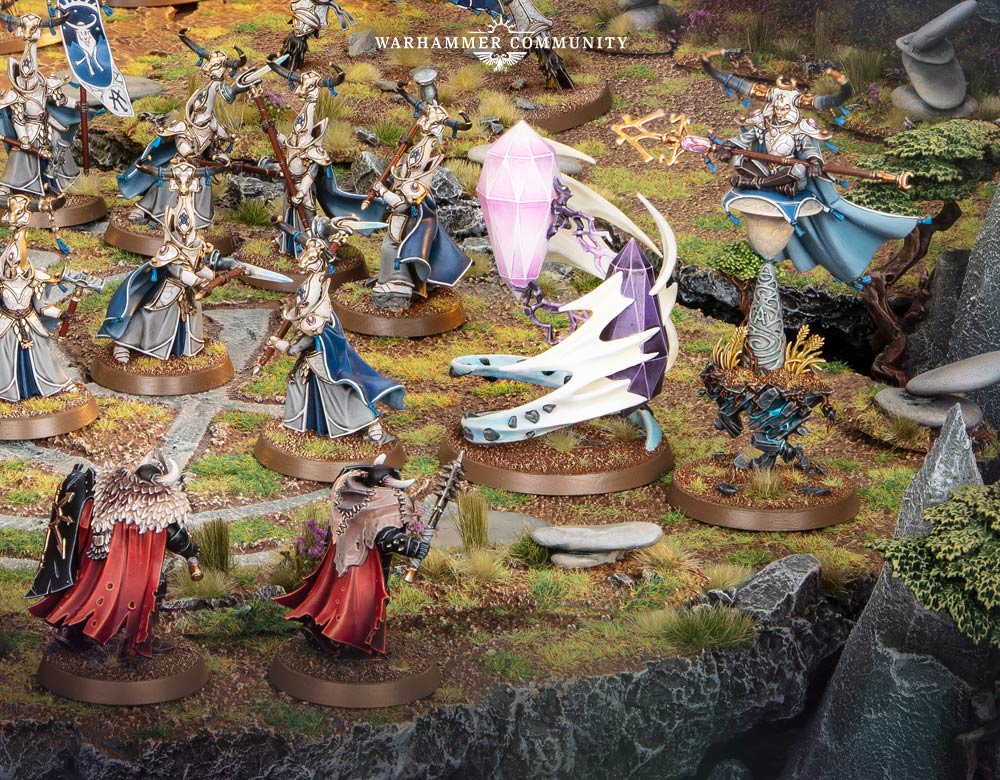 A slightly unorthodox spell, this magical whirlwind is a predatory spell that does no damage, but it certainly isn’t a spell to sleep on. Casting on a 7+, this slightly odd buff spell is set up within 6” of the caster with a d6 next to it set to 1, then has an 8” flying predatory move every turn. Any time a spell is successfully cast and not unbound within 12” of the spinning stones, the d6 increases in value by one, up to a maximum value of 6. Then, whenever a Lumineth wizard attempts to cast a spell while they are within 12”, they can draw on the power of the Twinstones to increase their casting roll but the amount shown on the d6, after which it resets to 1. If you are playing Zaitrec, or have one of the artefacts that allows you to get multiple casts like the Silver Wand, this is an awesome buff for your casting. Considering all the awesome debuffs available to your army, and the extreme weight of spellcasting, this will likely build up fast, and find a lot of use boosting your army. Even just the extra 1 could guarantee your army gets their Power of Hysh bonuses off, or you can use all of them to build up power for one of your expensive CV 8 spells for the Lore of Hysh. No enemy general will enjoy a Total Eclipse that casts on a 2+, I assure you. 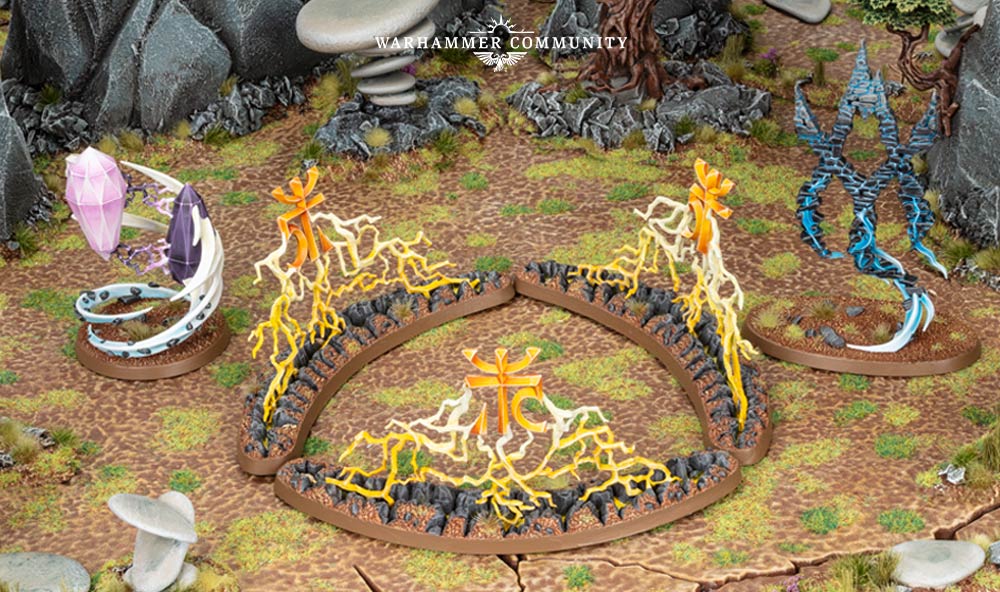 For all the magical power that the Lumineth bring to the table, they do run a tad on the squishy side. Enter the Sanctum of Amyntok, a CV 7 endless spell that turns your small based caster into a walking fortress. Once it’s cast, it and the caster are treated as a single model, and can move around the battlefield or fight as if they were still tiny. While inside the ring, all hit rolls against the caster suffer -1, and their armor save is increased by 1. In addition, at the end of the combat phase, if any attacks from your opponent targeted the enclosed wizard during that phase, roll a d6 for every enemy unit within 3”, dealing back a mortal wound on a 4 or 5, or d3 mortal wounds on a 6. This is a great way to keep your important casters alive, and will deter your opponent from sending important units to take them out. For added fun, cast this in conjunction with a Balewind Vortex. This will give the otherwise squishy Cathallar or Stonemage a hefty 3+ armor save, in addition to increasing their range and spell casting potential. That’s a big investment, sure, but a 24” Darkness of the Soul with little to no chance of rebuttal is probably worth the investment.

So your Stoneguard can turn to rock to protect themselves, and Stonemages can bring rocks to life to cause some bovine havoc, but what happens if you want to make your opponents into rocks? Well, you get a Rune of Petrification, a CV 8 no thank you spell for your Lumineth mages. Once cast, the large floating rune is placed anywhere wholly within 18” of the caster. From then on, any non-Lumineth unit that starts or ends the movement phase within 6” of this model suffers d3 mortal wounds on a 4+, and their run and charge rolls suffer a -1 penalty.

This is a great way to put the hurt on slow aggressive armies, or protect an exposed flank from a dangerous charge. Consider using one to cover your Sentinels, as they rain death down on your enemy with little fear of retaliation.

Which of the Endless Spells is your favorite?