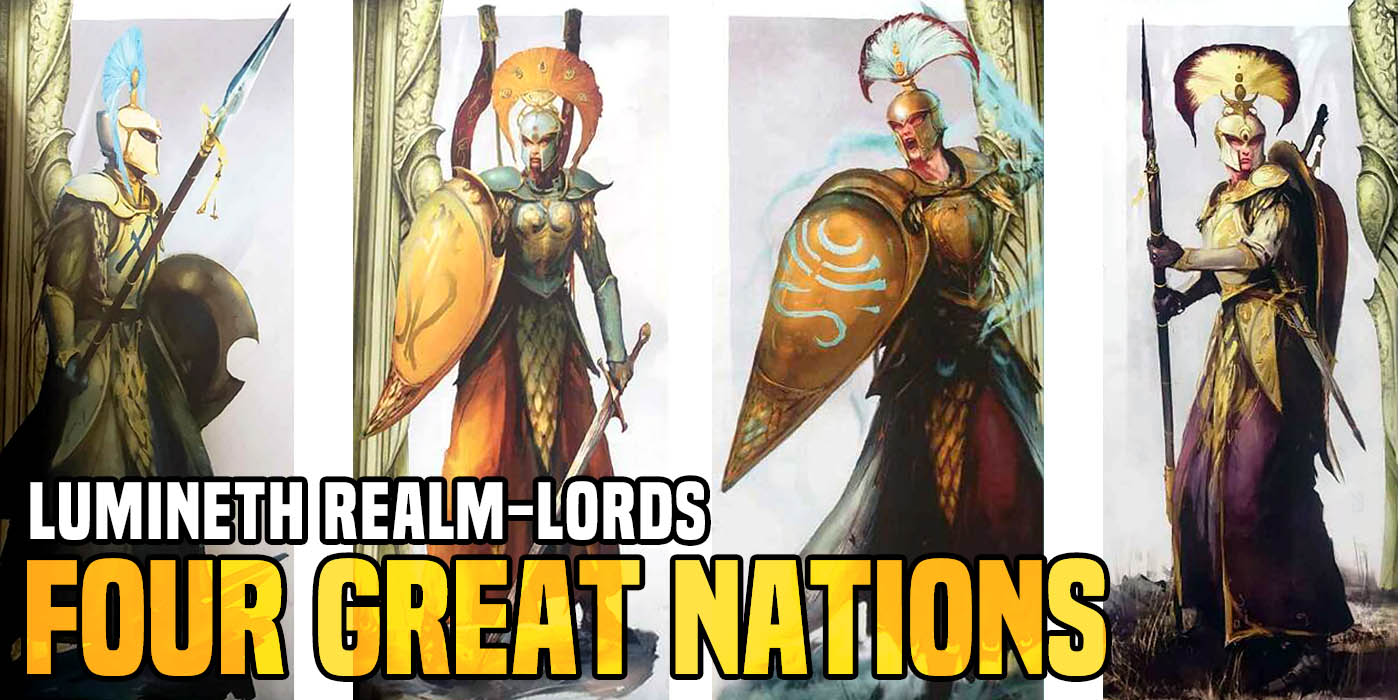 Here’s my take on the new Lumineth subfactions.

Now that the Lumineth have been out in the world for a few days, people are starting to theorize what lists they want to bring, what’s strong/weak, etc. As with all of the recent releases, the Lumineths come with their own subfactions in the form of the Great Nations, and some sit better with me than others. Here’s my thoughts on the Lumineth subfactions, and which ones I think will see the most play.

If you like the Alarith Stoneguard and Stonemages, then this is definitely the subfaction for you, since it makes them battleline and buffs them a great deal. First, the Enduring as Rock trait for Alarith units can eliminate Rend up to -2 instead of just -1, which is huge for keeping your hammer bros alive and smashing. The command ability is a bit gimmicky, since it allows you to move 2 units out of combat instead of just one, but a smart opponent will use the move to wrap and surround your unit, which could be a worse case than where the enemy was already. The compulsory command trait and artefact are pretty cool though, allowing you to turn your general into a wrecking ball. The trait allows your general to forgo all of their attacks for a single killing strike that hits on a 2+ and dishes out d3 mortal wounds, which is good if you want to almost guarantee a kill on a weakened hero. The artefact is one of the best in the book, bringing together a series of abilities that allow you to increase the damage of one of your attacks per turn, ignore wounds and mortal wounds on a 6, and ignore spells on a 5+.

If you want to run an army of cows, go Ymetrica.

When the Kharadron Overlords came out, did you find yourself thinking, “They’re cool and all, but what if they were aelves?” If so, then I can’t help you, but Syar comes pretty close since they get a few extra chances to manipulate their aetherquartz, which is the pretentious Aelven version of aethergold. The entire army gets to start with 2 charges per unit instead of just 1, and they can use a command point to burn out 2 per turn instead of just one (though I would suggest keeping a few Cathallars close by to absorb the heavy Bravery hit). And speaking of pretentious Aelven nonsense, the Syar command trait makes your general so infuriatingly arrogant that they can force an enemy Hero to recklessly focus on putting them down, meaning that the chosen hero can ONLY attack them in that phase and all attacks against the enemy get +1 to hit. And if you’re going to have a hero like this, you might as well give them a worthwhile weapon, which the Syar artefact definitely is. Unmodified hit rolls of 3+ with this weapon always hit, unmodified wound rolls of 3+ always wound, and any unmodified armor saves against it of 3 or less always fail. Even though the generic Lumineth heroes aren’t exactly combat focused, this can certainly make your opponent think twice about engaging your general.

If you want to buff your army with reckless abandon and strut around like the shiny aelf you are, this is the faction for you.

As a fan of goofy tactics and armies functioning like cogs in a machine rather than individual units, this is definitely my favorite subfaction. Canonically made up of soul-bound twins, this army rarely runs and can execute blistering tactical maneuvers. All Vanari and Aelementari (sorry Calathars..) in this army get +2 Bravery, which means they’re less likely to run due to battleshock. In addition, so in tune with each other are the warriors of this nation that when you use a command ability on a Vanari unit, it can once per phase also effect another Vanari unit within 3” for free. Combined with the faction command ability, which allows a unit of Vanari to re-roll hit rolls of 1, this is a pretty solid ability. The faction doesn’t have its own command trait, meaning you can customize your general to fit your specific tactical plots, and the artefact of power allows the wielder to return to life on a 4+ the first time they are slain.

If you want to add chess to your games of Age of Sigmar, or if you just like the idea of perfectly symmetrical fighting, consider Iliatha.

Almost every unit in the Lumineth army is a mage, and the Zaitrec faction are the best of the best. Every wizard gets to add +1 to the first casting roll they make every turn, and all of your heroes come to the table with an extra spell from the relevant lore table. Your general is allowed to unbind an additional spell every enemy hero phase, and the second time they attempt to unbind a spell each turn they can re-roll the attempt, representing the mage picking up exactly what the enemy is putting down. The artefact of power isn’t terrible, giving a 6+ to ignore wounds and mortal wounds (or a 4+ if Teclis is on the battlefield) but it seems a little situational, and there are better choices for your heroes in the other factions or generic lists. Unique among the subfactions, however, every wizard in your army knows the Overwhelming Heat spell, which casts on a 7 and causes an enemy wholly within 24” to halve their Movement until your next hero phase. In addition, you get to roll a d6, and if you roll equal to or above the target’s armor save, they suffer d3 mortal wounds. This is a nightmare for heavy infantry like Khorne or Slaves of Darkness, and can keep your army safe from heavy hitters charging you.

Which subfaction is your favorite?