D&D: An Adventurer’s Guide To Chult 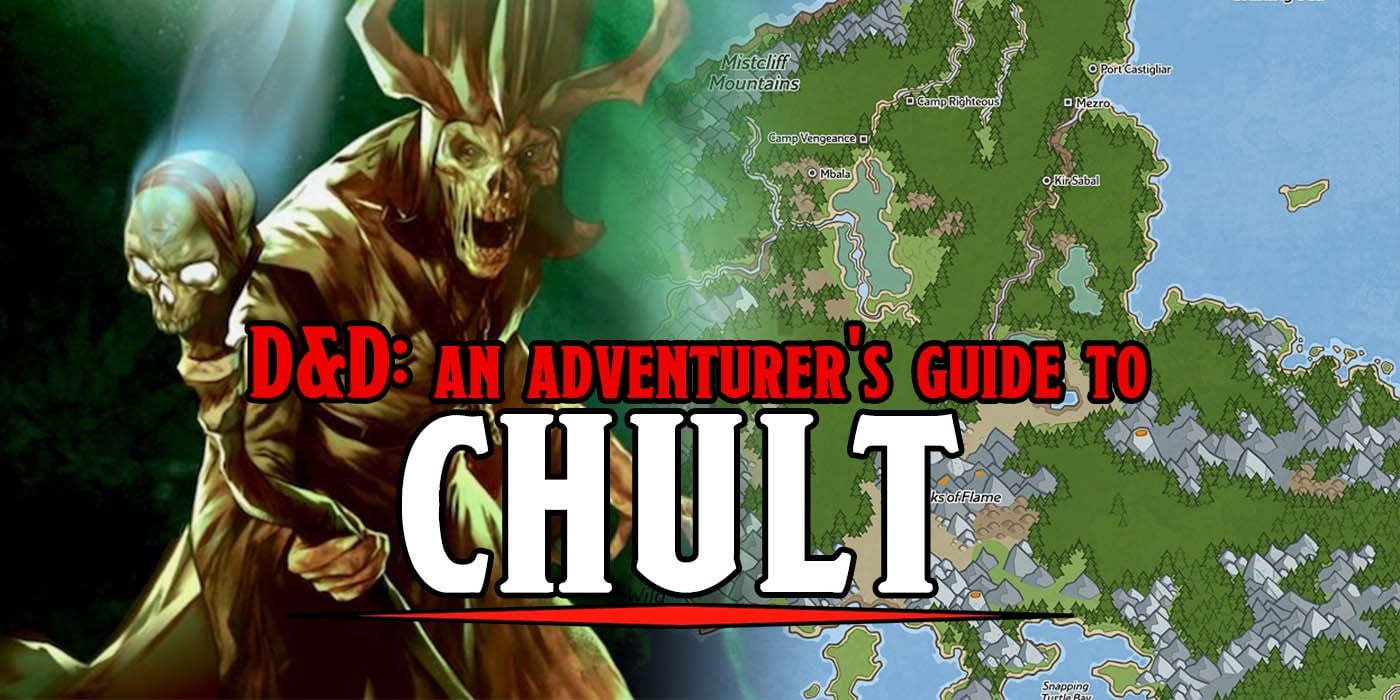 Tomb of Annihilation fans – this one is for you. Get ready to adventure in the jungles of Chult!

The Jungles of Chult are fraught with untold peril and undiscovered monsters. Isolated from the rest of the world, and full of peril–Terror Incognita, if you will. It’s also the setting of the big adventure, the Tomb of Annihilation, so let’s dungeon delve into the jungle, gather up our mosquito netting, pith helmets, binoculars, and dinosaur saddles, and start blazing a trail down to the mysterious peninsula of Chult.

Tashalar is a civilized land full of riches and exotic goods and fine foods and skilled artisans. They are famous for their crossbows and fast ships. Indeed the boats of Tashalar are well known throughout the Tashtan coast, a region they rove with ships laden with some of the most luxurious goods in the realm. It is said that a single crate of Tashalaran grapes could make you wealthy for life–and little wonder. Their perfection is legendary–even the worst vineyard in the region produces bottles of wine that sell for hundreds of gold pieces. 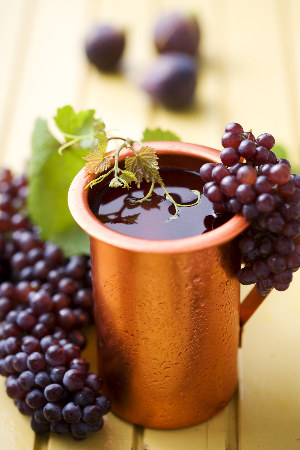 Pictured: Five years’ of income in one night.

This is a land of merchant consortiums and sailors and craftsfolk who–admittedly–must contend with a contingent of evil Yuan-Ti who have set up their temples in the Black Jungles, with reputed connections to the UNderdark and a portal to the Vilhon Reach secreted away in the temples to their dark serpent deities. And of course there’s the Rundeen consortium that puts a stranglehold on trade within the region–through their hands much wealth must pass before it makes its way to the rest of the realms. But still! A bastion of civilization and politics.

Admittedly, not much is known about this kingdom which lies on the other side of the Sanrach Mountains. And, to be certain, while it is cut off from the rest of the peninsula by thick jungle and rugged mountains, explorers from Tashalar have been there. There are walled cities and carved mountain passes that are hidden with illusions–and any rumors of the expanses of tall grass or massive jungles that are home to a lost civilization of wild dwarves are just that. Rumors. But while not much is known about Samarach–a good deal is known about:

Chult is the primary region on the Chultan Peninsula. And though, yes, the namesake Jungles of Chult are here, and they are indeed home to many mysteries–there’s more than just the jungle to define this region. After all, a traveller might visit the holy city of Mezro–a bastion of civilization with its own arcane academy replete with years of knowledge. The land of Chult is protected by the many-aspected Ubtao, a divine being who maintains vigilance over threats from the Peaks of Flame. Indeed, in the holy city of Mezro the undying baras of Ubtao (who are a bit like paladins unless you’re talking to them), can be seen keeping watch over the city, maintaining peace and order. 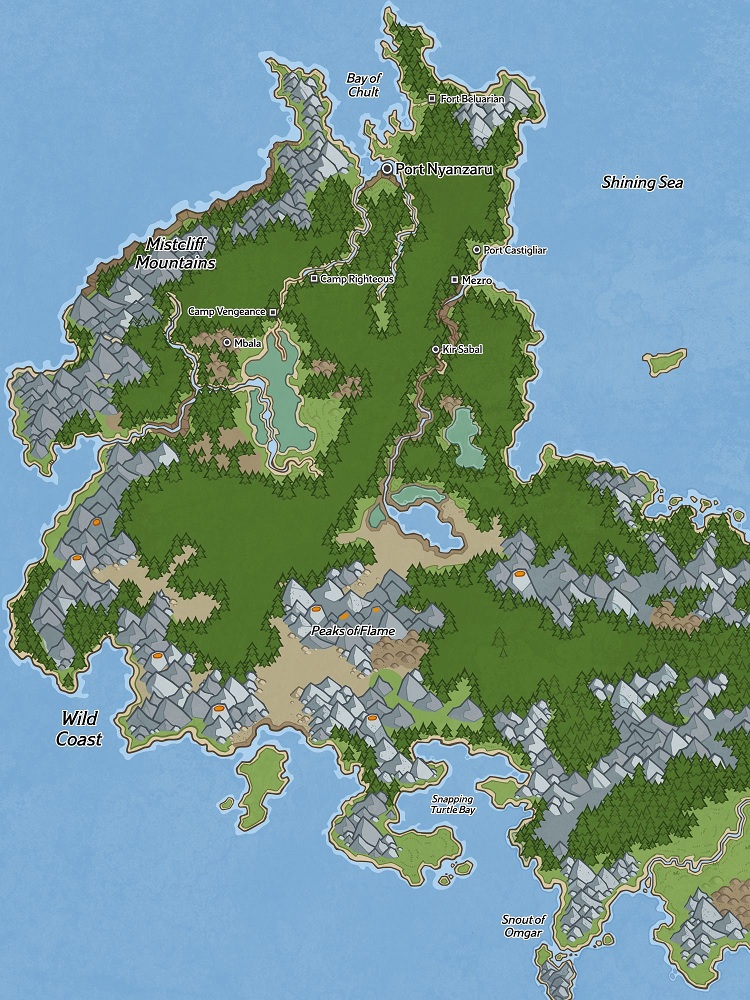 Map of Chult – Idle Champions of the Forgotten Realms

And then of course there’s the small city of Port Nyanzaru–an important trading center which is Chult’s portal to the realms. And while it may seem as though it’s more like a fortress than a city, it’s only built that way because of the numerous pirates that roam the coastal waters. And–wait–did you hear that? 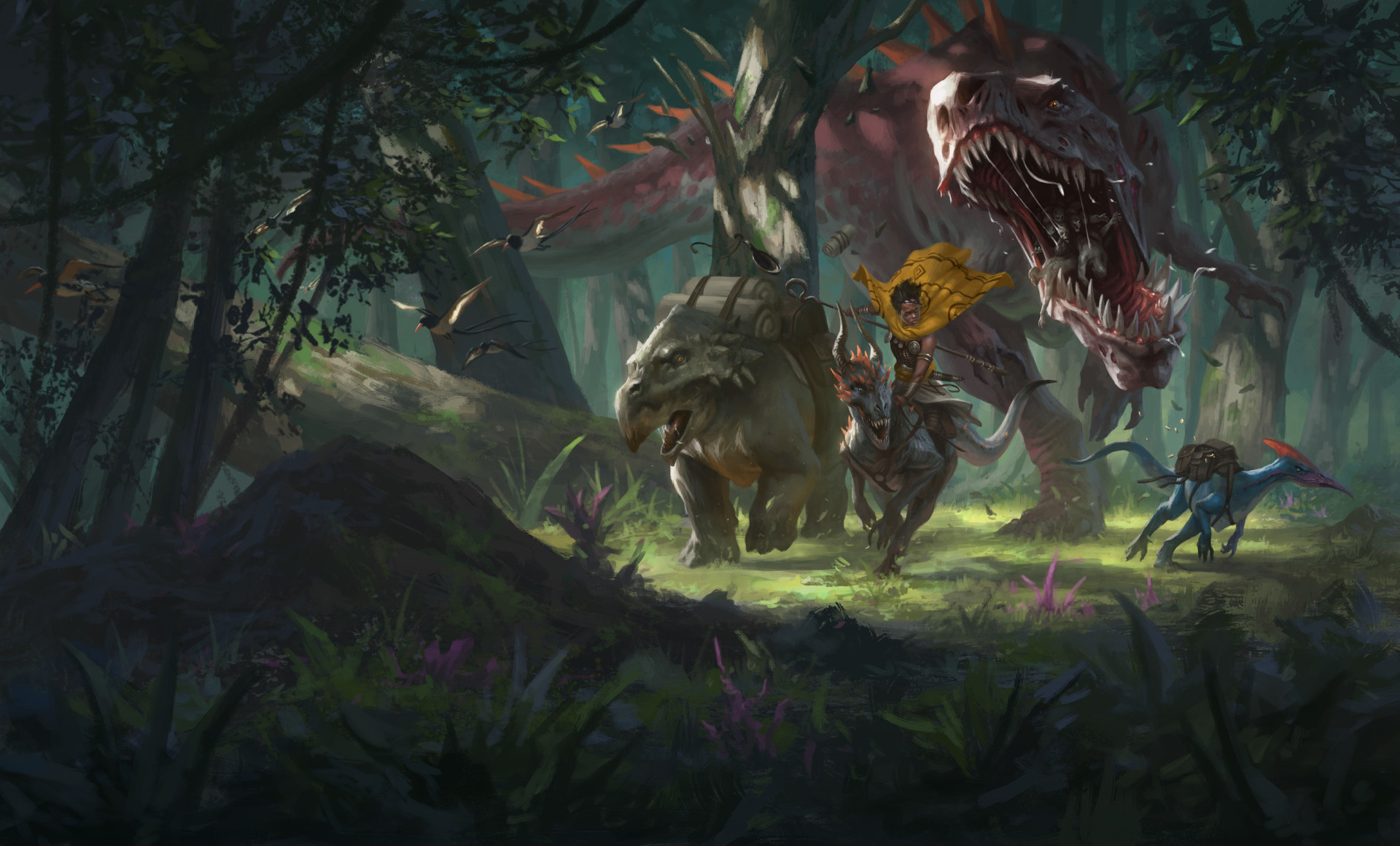 Well, there’s no keeping the secret any longer, travellers. There’s a reason that the entire Chultan peninsula has its reputation. And this is entirely the fault of the Jungles of Chult. Here the rumors that every vine is a thorned man-eating monstrosity and that there are serpents more venomous than the blades of a thousand Zhentarim are (mostly) true (don’t tell the Zhentarim, they’ll get sad). In the Jungles of Chult you’ll find a thousand thousand deadly things waiting to kill you. Disease can be found in nearly every corner of the jungle, carried in plants with sharp spines, or in the hundreds of insect bites a traveller might acquire in the course of a day. 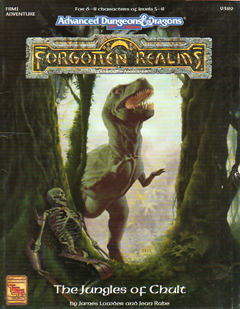 And too there are mists in the jungle, mists that carry with them a magical malaise and that’s saying nothing about the water you can find. Yes the jungles of Chult are teeming with life–most of it just happens to want to kill you. Of course that’s only near the outskirts. Should one venture in through to the deep canopy regions of the jungle, you’ll find massive ants, spiders, and purple worms thriving beneath hundred-foot-tall trees.

And yet, for all its deadliness–for all that tyrant lizards still stalk the jungles, the massive, undisputed kings of the jungle as they were in ancient days–explorers seek out Chult. Again and again. Some say the blood and bones of those blinded by avarice make the jungle grow lush. But for all that–Chult’s riches are not exaggerated. Ruined cities and mines are choked with coins and gems of every color. In beneath the vines and crumbling stones and six-headed serpents you’ll find tablets of gold and platinum that carry the wisdom of a thousand years.

But, more likely you’ll find death at the hands of some forgotten beast that has found in you, a delicious meal.

Truly it would take some kind of dire curse to draw followers to the Jungles of Chult–only the truly mad or the truly brave (or perhaps someone who is both) would dare venture into these lands.

If you dare venture into the Jungles of Chult, check out the Tomb of Annihilation setting guide!