The day has arrived. Indomitus Pre-Orders are live. And probably sold out.

The galaxy writhes in the mailed fist of all-consuming conflict. The Imperium of Mankind teeters on the brink of annihilation, beset upon all sides by heretic warlords, daemon-summoning witches and rapacious alien empires. In every star system and upon every planet, fierce battle rages as loyalists, heretics and aliens tear reality itself apart in their war for dominance. Every day the flames rise higher.

This is a more terrible era than ever before, and there is no peace amongst the stars…

If you’re looking to plunge headfirst into the new edition of Warhammer 40,000, look no further than this glorious boxed set. Warhammer 40,000: Indomitus comes complete with two powerful armies, pitting the mighty Space Marines against the immortal machine race known as the Necrons for control of the Pariah Nexus. The set also includes an Indomitus-exclusive version of the Warhammer 40,000 Core Book, which delves into the game’s grimdark, futuristic setting and provides a full set of rules for playing thrilling games with your Citadel miniatures. 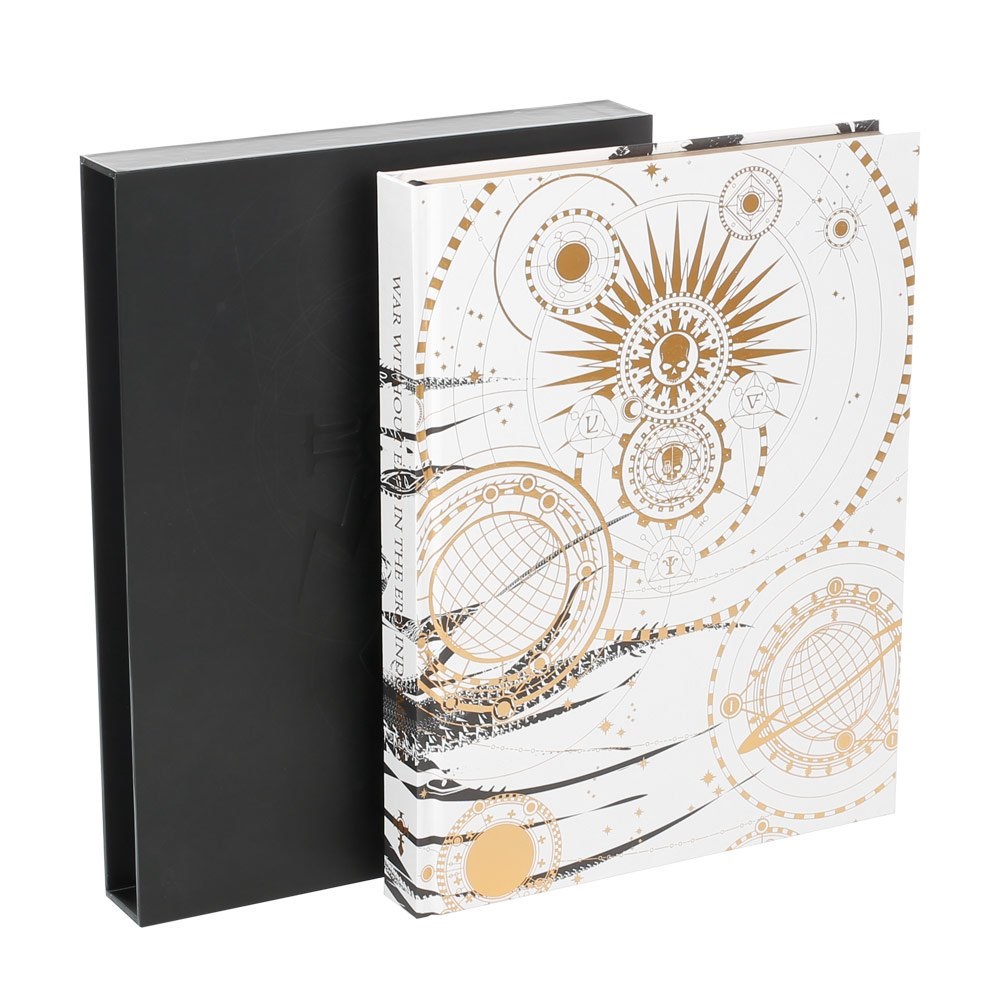 The Book
Strictly limited to 2,000 uniquely numbered copies worldwide, this 368-page hardback book is of exceptional quality, complete with a black 1/4″ ribbon marker, gold gilt edges, and gold foil blocking on the front and the spine. The book is presented in a black slipcase with an anti-scratch finish, and which is embossed with Crusade iconography on its front and back. It’s the essential book for any fan of Warhammer 40,000 who is looking to commemorate the best ever edition of the game.

There is no time for peace. No forgiveness. No respite. There is only war.

The galaxy writhes in the mailed fist of all-consuming conflict. The Imperium of Mankind teeters on the brink of annihilation, beset upon all sides by heretic warlords, daemon-summoning witches and rapacious alien empires. In every star system and upon every planet, fierce battle rages as loyalists, heretics and aliens tear reality itself apart in their war for dominance. Every day the flames rise higher.

This is a more terrible era than ever before, and there is no peace amongst the stars…

The Book
A 368-page hardback, this is the essential book for any fan of Warhammer 40,000 – everything you need to know to collect, build, paint and play with Citadel miniatures.

It starts with an overview of the Warhammer 40,000 hobby, covering the four areas of Collect, Built, Paint and Play, including descriptions of open, matched, and narrative play. 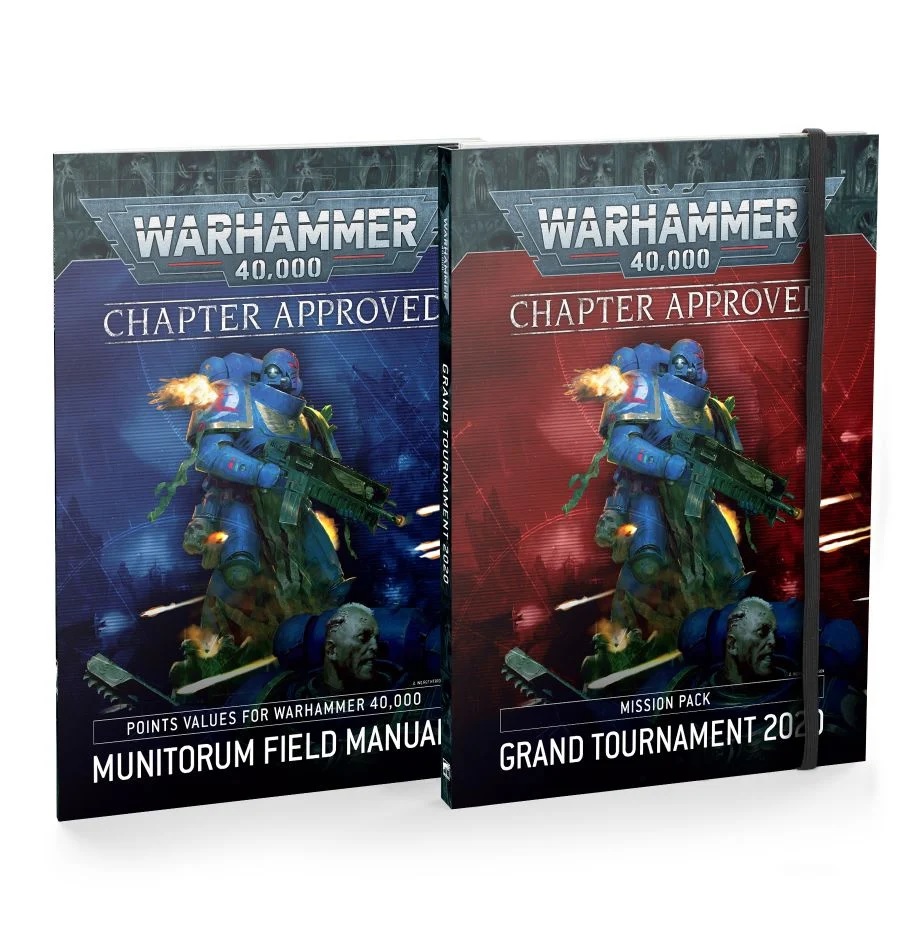 This year’s edition of Chapter Approved is the essential gaming toolbox for all fans of Warhammer 40,000 matched play. Whether you’re a tournament regular or simply like to ensure your battles are always fought on an even footing, this is the essential supplement for matched play games in the this edition of Warhammer 40,000. Inside this 96-page softback book, you’ll find:

– Two mission packs, comprising nine missions each for Incursion- and Strike Force-scale battles, each designed to offer a different challenge to the players.

– Guidelines for setting up and playing a matched play or Grand Tournament-level competitive game, including suggested battlefield size, time limit and how best to determine secondary objectives.

Whether you’re looking to take your matched play gaming to a whole new level or are wanting to stay on the pulse with all the latest points value developments for every faction, Chapter Approved has something for you, and is a fitting guide to the incredible new edition of Warhammer 40,000. 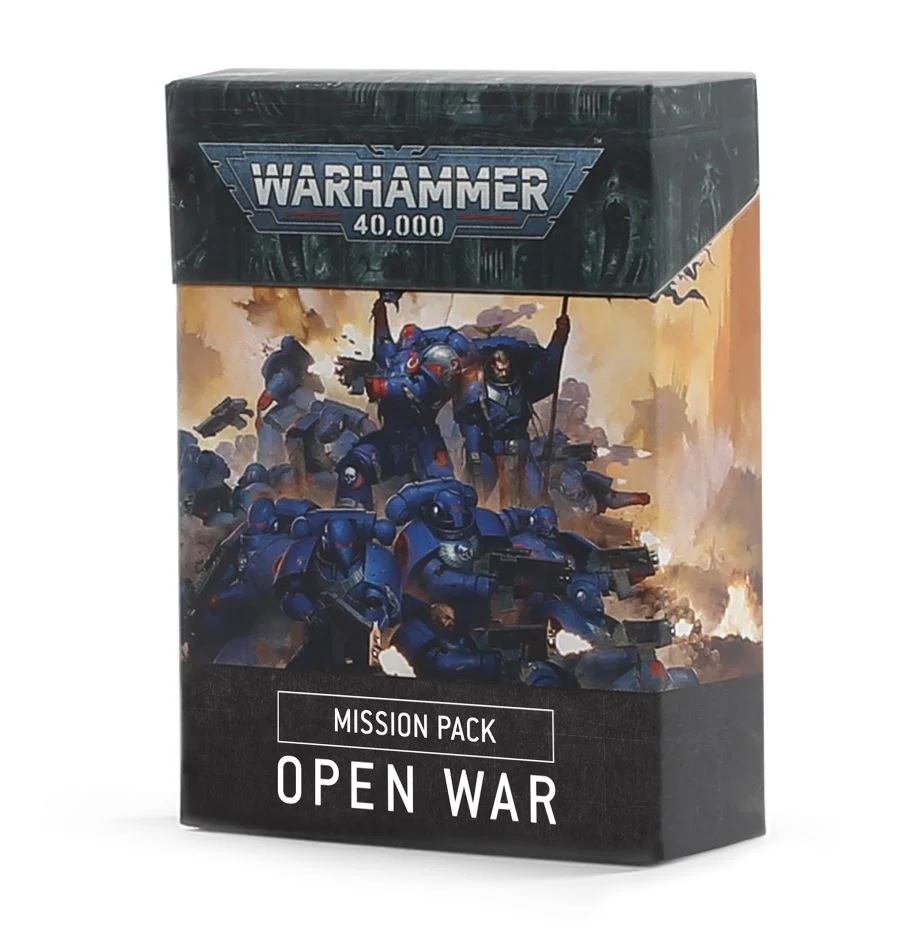 A simple and fun way to set up games of Warhammer 40,000, Open War cards take all the indecision and doubt away and let you get on with your gaming. A deck of 51 cards split into five types, they help you determine the deployment, objectives and special rules for open play games. Included:

– 12x deployment cards: Twelve different styles of player deployment
– 9x objectives cards: Nine different objectives for winning the game
– 18x twist cards: Eighteen different special rules that can be used to add a special factor to the game, such as acid rain, orbital debris and fighting in the dead of night
– 6x ruse cards: Six different cards that can be used to glean an advantage, such as ambushing or digging in – used to counter a higher Power Rating
– 6x sudden death cards: Six different cards that provide different ways to win if you are significantly outnumbered – if your enemy has a Power Rating at least twice that of your own, you get a secret advantage to use as you wish!

If you use every type of card, that’s well over 60,000 combinations – a huge amount of variety! The cards are presented with an instruction booklet, and feature artwork on the reverse. 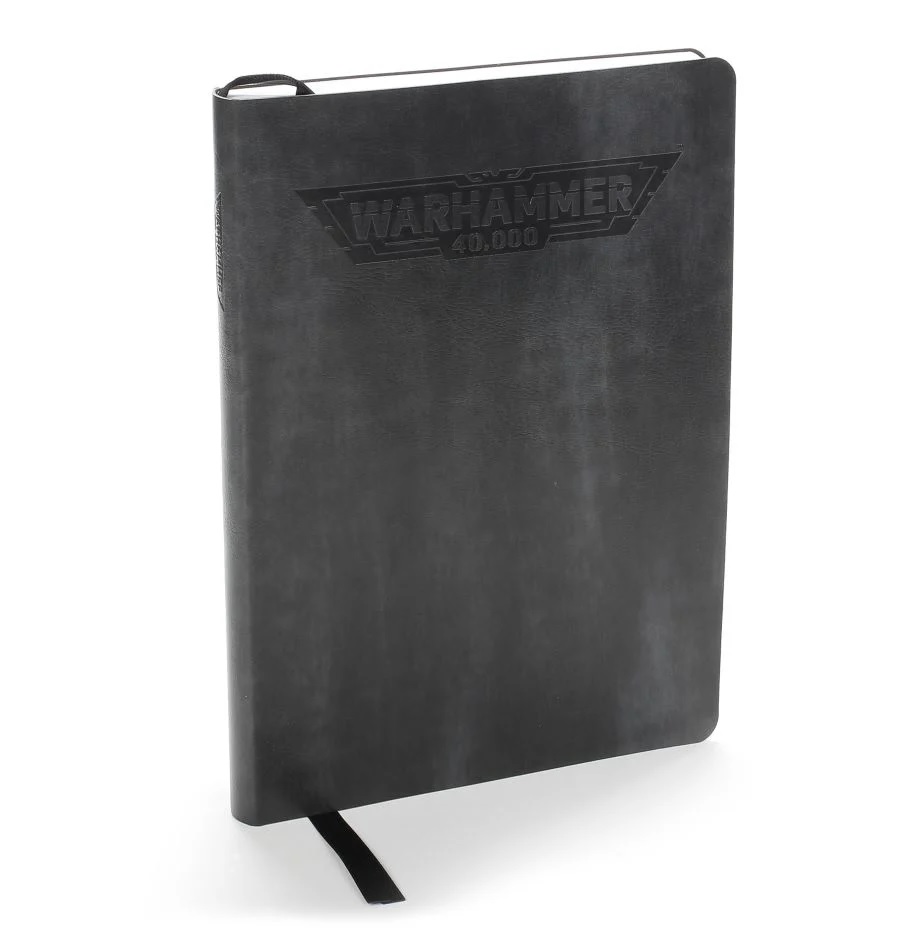 What better way to keep track of your glorious victories (and those times that you came second) than in the beautiful Crusade Journal? Easily record the progress of your Crusade force as it grows from a surgical patrol to a mighty battle host. You can also keep track of individual assets, whether it’s a squad of bloodthirsty warriors, an indomitable battle tank or a heroic commander and watch their sagas grow as they become grizzled veterans.

This 200-page A5-sized book is bound in faux leather and features the Warhammer 40,00 logo embossed on the front. Inside you’ll find 200 double-page spreads where the left page is an individual unit’s Crusade card and the right is an entire Crusade force’s order of battle. 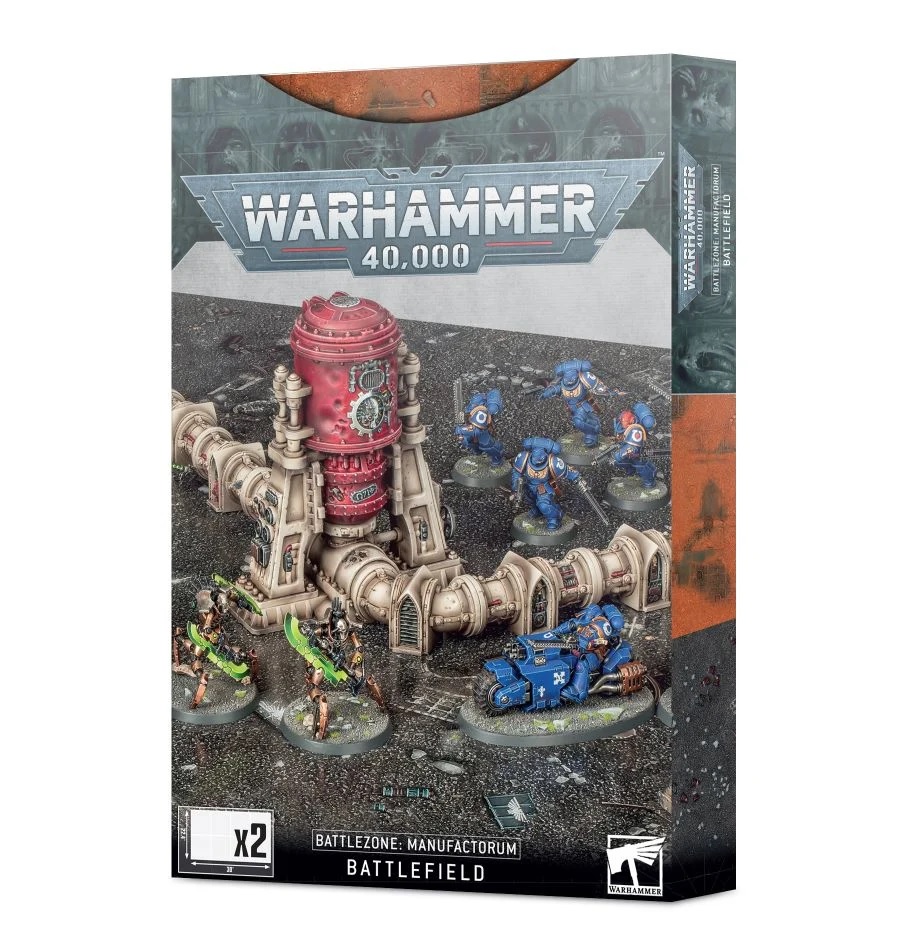 You’ve read the Warhammer 40,000 rules, assembled your models and painted them beautifully. Now, you just need somewhere for them to fight. These boards let you battle over either the irradiated wasteland of a forge world or a ruined moonscape to prove the dominance of your forces and you as a general.

This box contains two boards, each measuring 30″ by 22.4″ (76cm x 56.8cm). Each board is 1.5mm thick, can be folded into eights and is double sided, featuring different art on each side. One set is perfect for Combat Patrol or Incursion games of up to 1000 points. Two sets can be put together for Strike Force games of up to 2000 points, while three sets are ideal for Onslaught games of up to 3000 points. 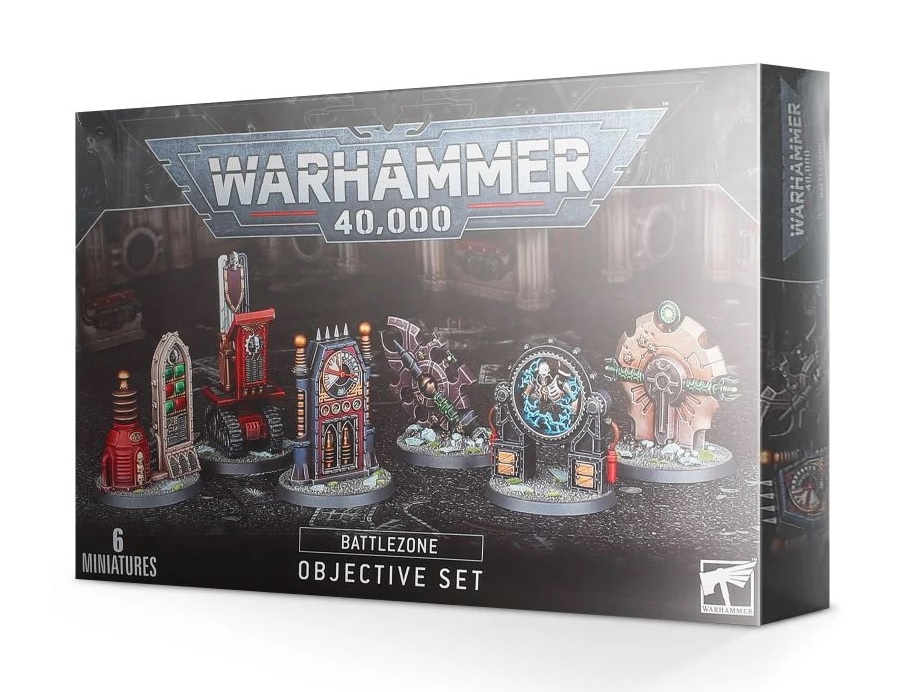 A battlefield isn’t complete without some objectives to fight over. These six objectives are Imperial- and Necron-themed but are ideal for any army to use as their goals in battles. Place them across the board and let the carnage commence.

It comes supplied with six 50mm Citadel round bases. 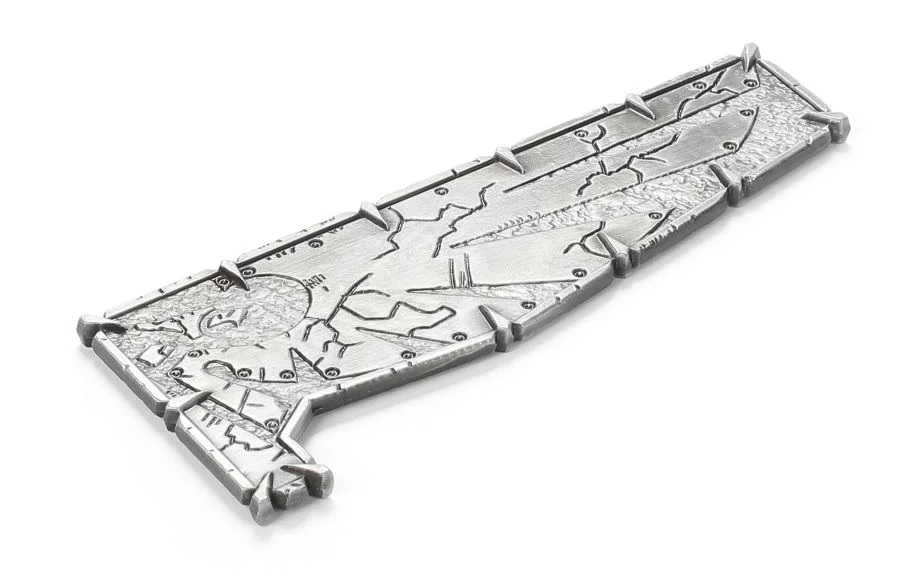 What better way to gauge your success on the battlefield than with the Warhammer 40,000 Combat Gauge? Use it to easily measure distances, even in the heat of battle.

This handy metal gauge is shaped like a Imperial aquila and has five edges that are usable for measuring distance in your games. Quickly and clearly measure 0.5″, 1″, 2″, 3″ and 5″. 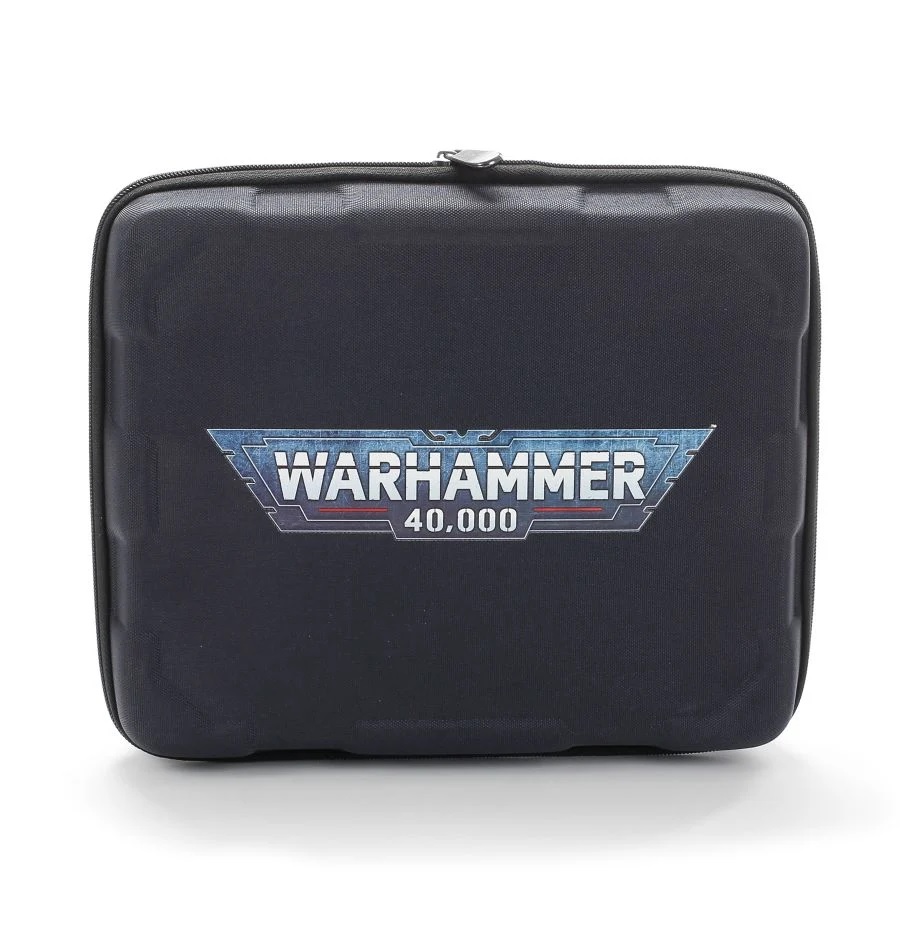 If you want your army to carry the day on the battlefield then you have to find a way to carry them TO the battlefield. Not only is this stylish case the best way ensure that your models can be transported safely, it also fully unzips, allowing you to use half of it as a dice tray. So not only does it save your miniatures, it’s great for your saving throws too.

Featuring the stunning Warhammer 40,000 logo, this case incorporates a layer of foam that measures 270mm x 220mm x 50mm, which is enough to carry between 24 and 36 Citadel miniatures. It also features a top layer of foam, ensuring that your models will arrive in perfect order. The two halves of the case are held together by a sturdy zip fastening.

Having fun getting a hold of Indomitus…