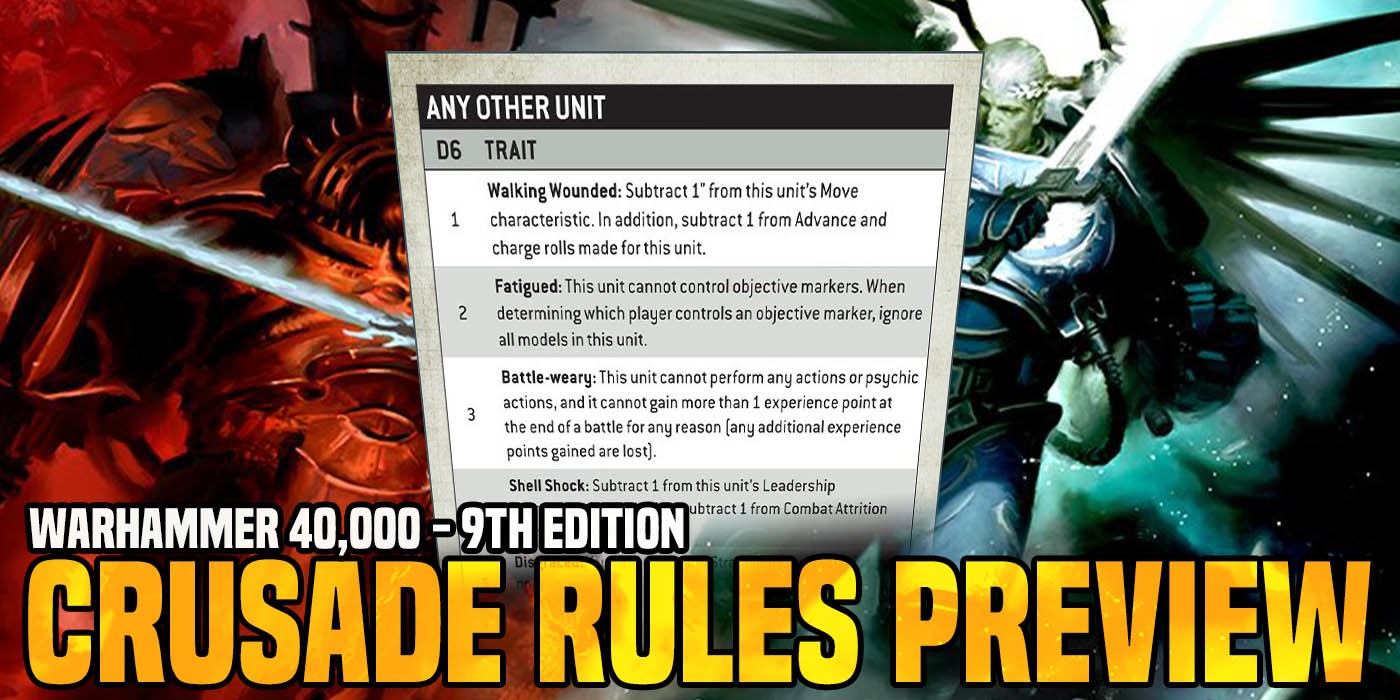 Crusade is a new way to play Warhammer 40,000 – it’s designed as a way to play a  campaign while you build our your army. But what happens after the game?

If you’ve ever played in a Campaign of any type of table-top game then you’re probably familiar with the concepts of Crusade. Once a game a played there is the added step (or steps in this case) of figuring out what the heck happened to each unit. While this can seem like a lot of extra record keeping this is also what helps to “forge the narrative” of your army. Other than having an excuse to play games, this is the reason that Crusade is different than a typical gaming experience.

So what happens when a unit is destroyed? What kinds of penalties or benefits do armies get for playing in a Crusade? Today, we’re getting a look at those parts of Crusade.

“After a battle, all models in destroyed units are restored, either having been repaired or otherwise recovered from their wounds. However, it’s possible for a unit to have picked up a Battle Scar along the way – you can’t always get away with being torn in half by a Carnifex or blasted apart by a battle cannon shell with nothing to show for it! A dice is rolled for each destroyed unit: on a 2+, they’re good to go, but on a roll of 1, you must choose one of the following options to apply to that unit.” 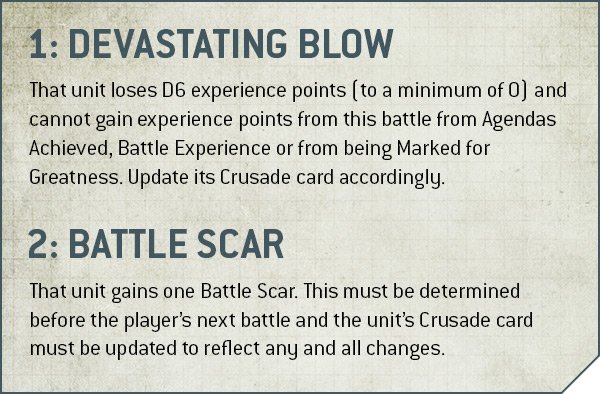 So far, it’s actually not that bad. If a unit gets destroyed, it only suffers from negative effects on a roll of a 1. And even if you do roll a 1, the unit isn’t completely wiped out. You can opt for a Devastating Blow or a Battle Scar. The Devastating Blow does cause the unit to lose XP and prevents them from gaining any from that battle. The Battle Scar has its own set of  effects: 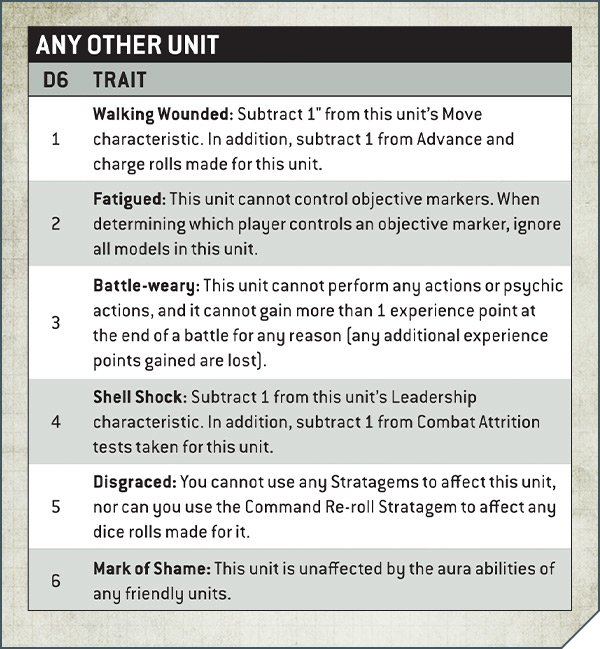 Note: There are 4 charts. One for the different type of unit: Characters, Vehicles, Monsters, and Any Other Unit.

So what’s the benefit of gaining experience for your units? And how do you even gain experience to begin with? Well, you can achieve agendas in the battle or you can meet one of the following options: 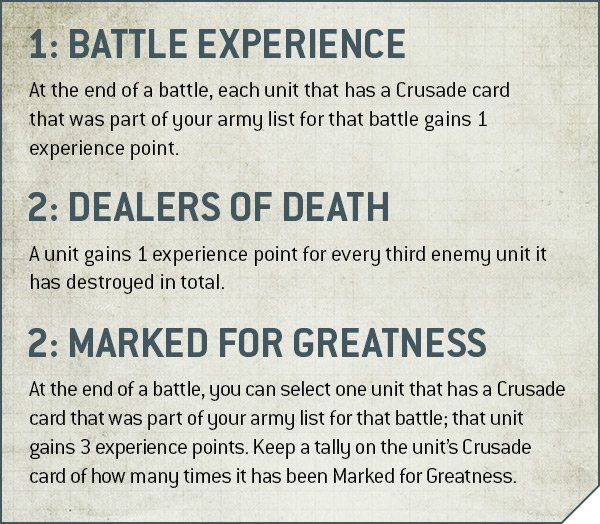 As your unit levels up, those units can then gain Battle Honours based on how much XP they have accumlated: 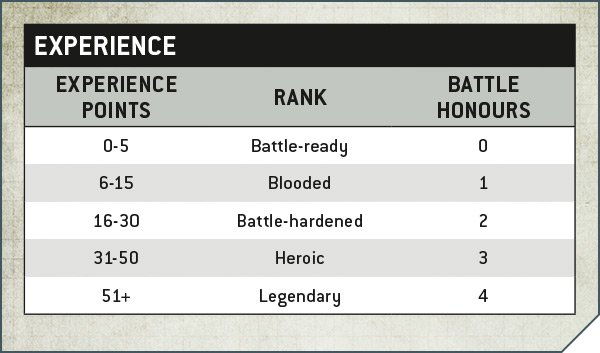 It takes quite a bit of XP to get up there in the Battle Honours but they can totally be worth it. There are 4 different types of Battle Honours you can apply to a unit that has ranked up: Battle Traits, Weapon Enhancements, Psychic Fortitudes, and Crusade Relics. In the example that GW used, they opted for a Battle Trait which also has 4 different tables depending on the unit type – just like Battle Scars: 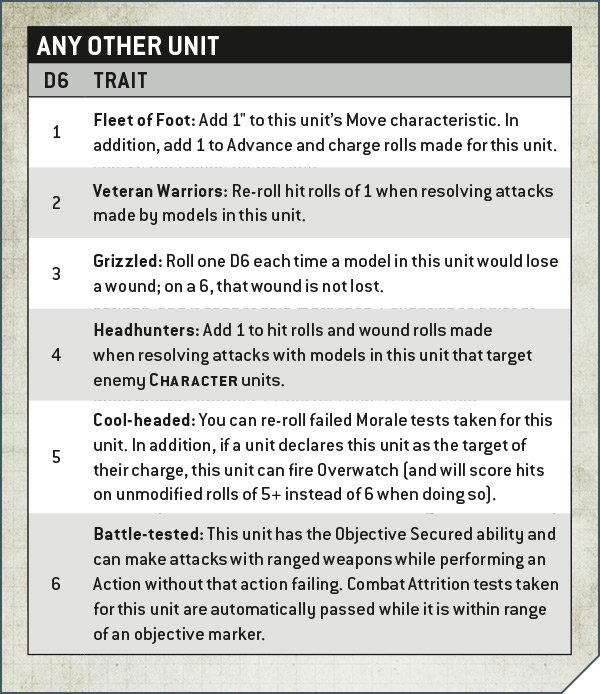 Note: There are 4 different charts for Battle Traits depending on the unit type: Characters, Vehicles, Monsters, and Any Other Unit.

All of these abilities are just bonus abilities you’ll get to mark on the unit card and use in future games. Pretty simple, right? So how do you actually grow your army? That’s where the Requisition points come in.

So you start with 5 Requisition Points and can never have more than 5 – you also gain 1 after every battle. That means it’s worth spending at least one before your first game. So what do those points do? For starters, they allow you to up your army’s Power Level so you can take more units – or you can expand units. There are a whole lot more options in the Core Book, too. 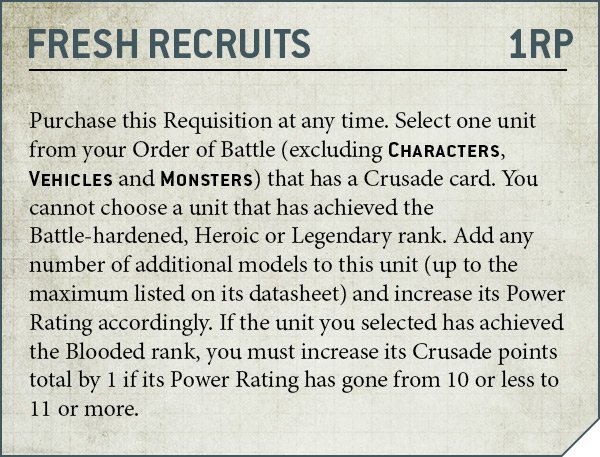 It’s a system that is designed to allow your army to expand as fast as you want via the Requisition points. And there are also balancing mechanisms built in with Crusade as player’s armies start to diverge in size. It sounds like a neat system to try and it seems perfect for a League or Gaming Group to try out.

What do you think of these Crusade Rules so far? Are you going to give them a go?