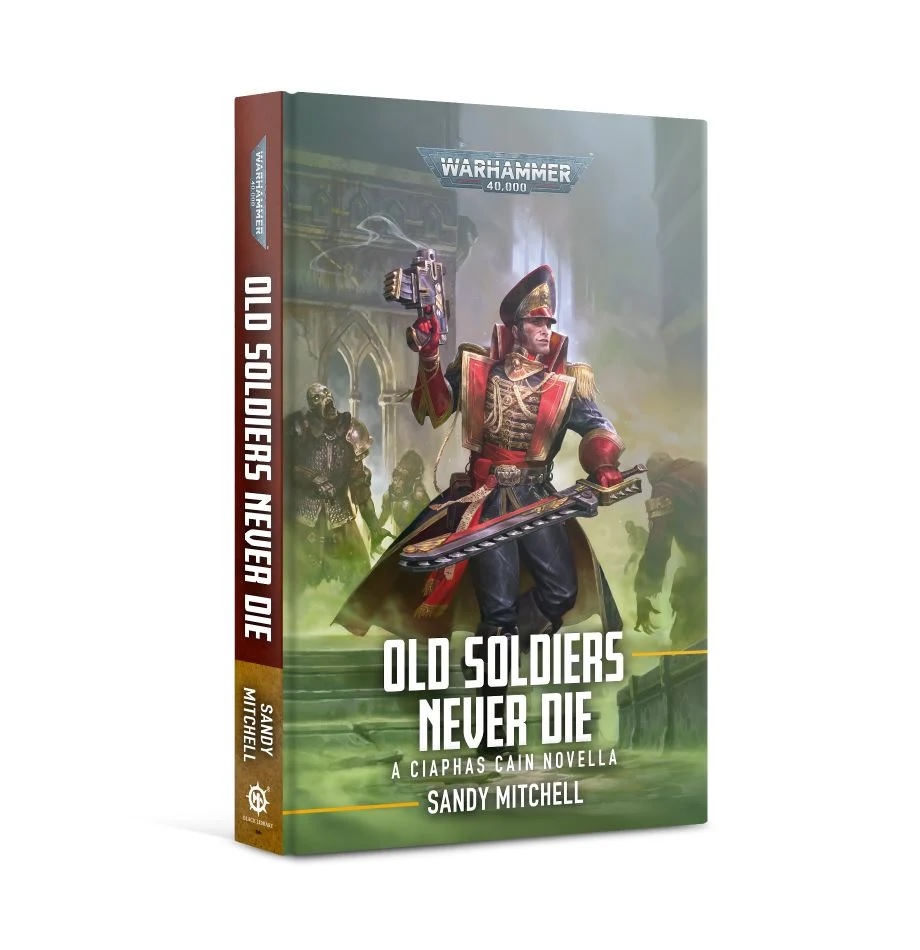 In the aftermath of an insurrection, Commissar Cain and his Valhallans face a new threat – a plague that turns its victims into flesh-eating zombies!

READ IT BECAUSE
The Hero of the Imperium battles zombies in a darkly humorous tale available by itself in print for the first time since 2012!

THE STORY
Inquisitor Amberley Vail opens the Cain Archive once again to present one of the strangest missions from the heroic commissar’s storied career. Deployed to the world of Lentonia to police the aftermath of an insurrection, Cain and the Valhallan 597th have to deal with a dangerous disease spreading through the Astra Militarum ranks… an infection that kills its victims and returns them to life as flesh-eating zombies! As the dead rise across Lentonia, Cain and his malodorous aide Jurgen must seek a cure and find the source of the warp-tainted infection before they end up among the ranks of the walking dead themselves. 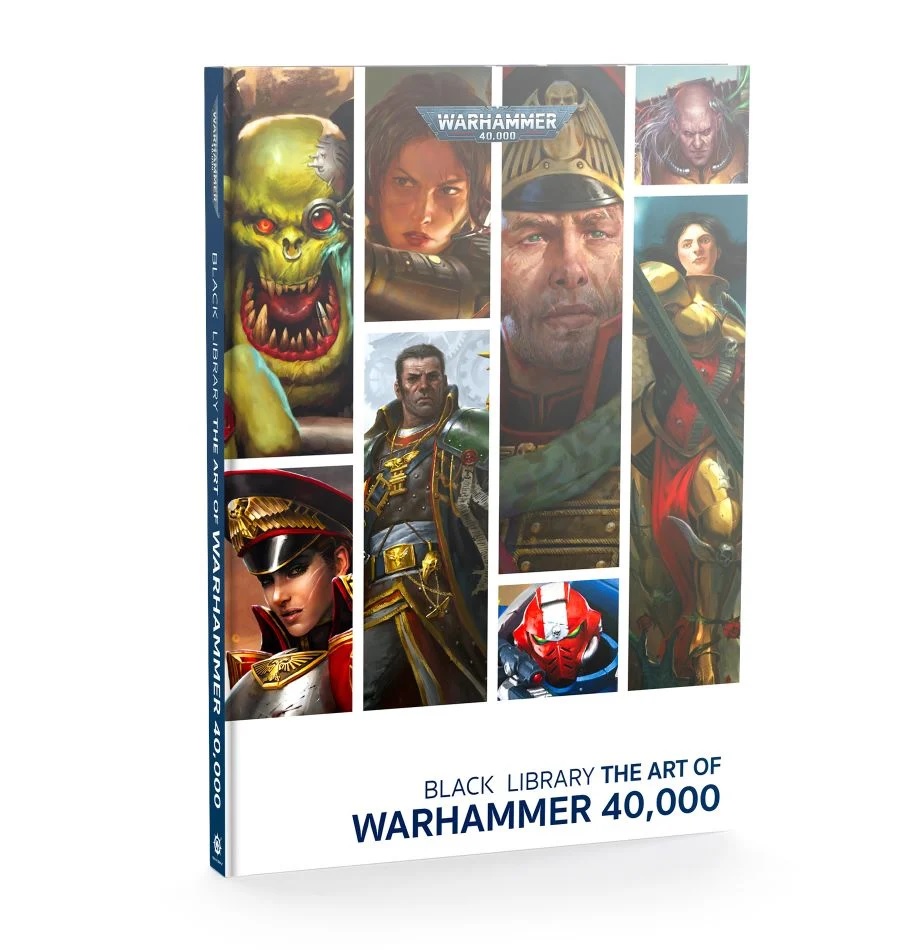 Discover more than 20 years of Warhammer 40,000 art from Black Library in an immense 248-page hardback packed full of incredible imagery.

READ IT BECAUSE
Take a trip through Black Library’s Warhammer 40,000 covers over the years with this astonishing collection of art from some of the greatest fantasy and science-fiction artists in the world.

DESCRIPTION
For over 20 years, Black Library has been telling action-packed, character-driven stories set in the grim dark future of Warhammer 40,000, and bringing those stories and characters to life through dramatic, dynamic cover illustrations.

Offering a unique behind-the-scenes perspective on the creation of more than a dozen of Black Library’s best-loved book covers, Black Library: The Art of Warhammer 40,000 is the ideal visual companion for readers of Warhammer 40,000 fiction. This art book contains over 200 pages of full-colour cover artwork from Black Library novels past and present, including depictions of fan-favourite characters such as Gregor Eisenhorn and Celestine the Living Saint, in addition to a brand-new reimagining of the classic cover art for Dan Abnett’s bestselling Warhammer 40,000 novel First and Only.

The Hammer and the Eagle: Icons of Warhammer (Paperback) $16 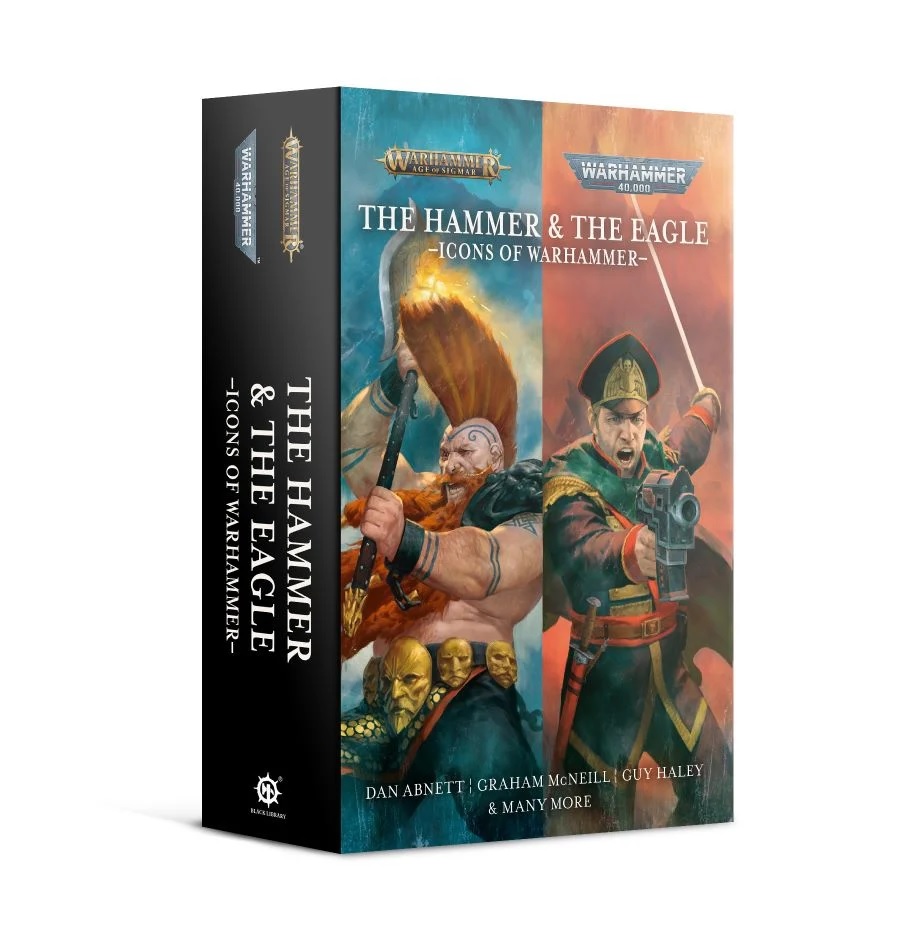 A Black Library Getting Started book

The 41st Millennium and the Mortal Realms are filled with heroes – in this anthology, you’ll discover many of them in action-packed tales that will thrill and delight you.

READ IT BECAUSE
Discover some of the greatest heroes of the Warhammer worlds in an epic collection of short stories that encompass incredible deeds and phenomenal heroism.

DESCRIPTION
In the grim darkness of the far future, and in the vastness of the Mortal Realms, there are those characters who stand out amongst all others.

Within these pages, and collected for the first time, are stories of some of Black Library’s best-loved and well-known heroes and villains. On deadly battlefields, Commissar Ibram Gaunt leads his regiment, the Tanith ‘Ghosts’, in a desperate battle for survival; on Ultramar, Ultramarines Captain Uriel Ventris stands as a bulwark against the forces of Chaos; in the shadowy underbelly of the Imperium, Inquisitors Crowl and Covenant ply their clandestine trade. Throughout embattled lands, the realm of gods and monsters, Vampire Queen Neferata seeds dark plots to secure her power, whilst Lord-Celestant Gardus Steelsoul is a paragon of virtue and honour, and drives back the pestilent hordes of the Plague God. These are just some of the legends, the light and the darkness – the icons of the Warhammer worlds.

CONTENTS
Endurance, Blood Guilt and Argent by Chris Wraight
Execution by Rachel Harrison
The Battle for Markgraaf Hive by Justin D Hill
The Smallest Detail by Sandy Mitchell
Of Their Lives in the Ruin of Their Cities and Thorn Wishes Talon by Dan Abnett
Mercy by Danie Ware
The Wreckage, Eclipse of Hope and The Dance of the Skulls by David Annandale
Rite of Pain and Veil of Darkness by Nick Kyme
Chains of Command by Graham McNeill
Redeemer by Guy Haley
Extinction and Shadow Knight by Aaron Dembski-Bowden
Prodigal and Ghosts of Demesnus by Josh Reynolds
Fireheart by Gav Thorpe
The Absolution of Swords by John French
One, Untended and Gods’ Gift by David Guymer
The Old Ways by Nick Horth
Hunting Shadows by Andy Clark
Shiprats by C L Werner 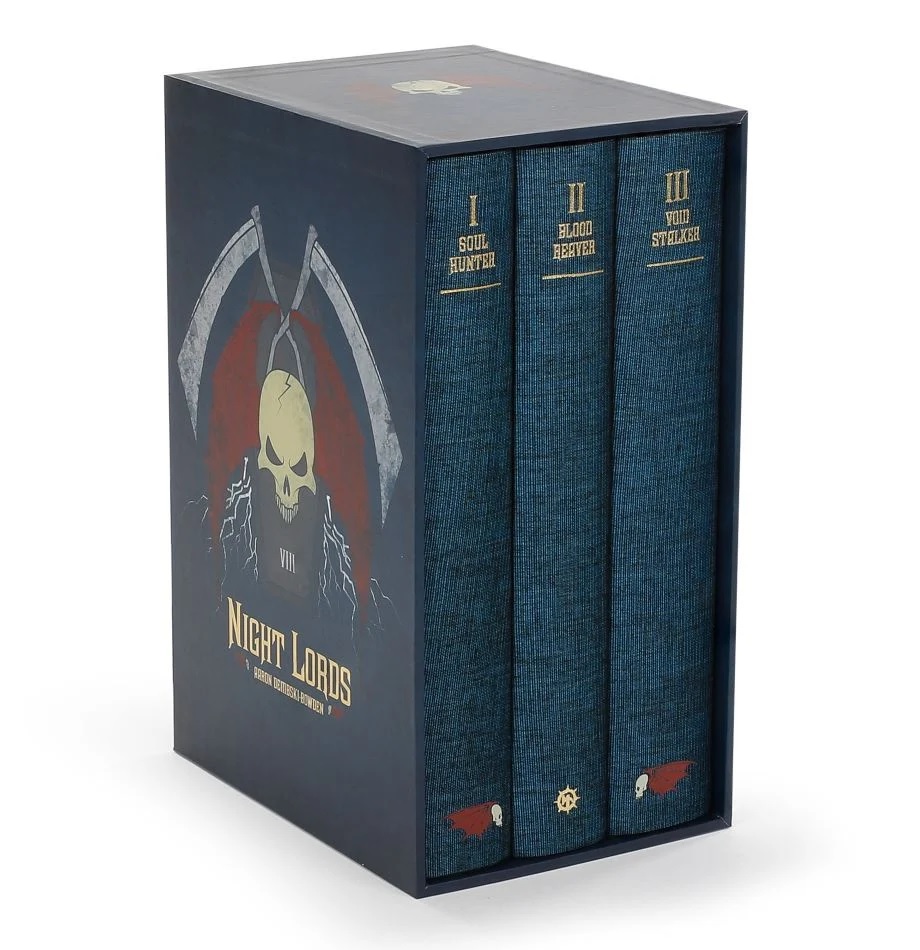 Guided by the visions of the prophet Talos, a Night Lords warband struggles for survival. But when they come into conflict with fellow renegades and are hunted by the eldar, they find themselves returning to the scene of their greatest defeat and drawn into a battle they cannot possibly win.

READ IT BECAUSE
Experience the epic story of First Claw, fan-favourite characters who also happen to be amongst the most monstrous killers in the galaxy. From their struggle to survive on the Imperium’s fringes to deadly alliances and a confrontation against the alien aeldari, this is an action-packed saga filled with incredible characters and astonishing events.

DESCRIPTION
Driven by their hatred of the False Emperor, the Night Lords stalk the shadows of the galaxy, eternally seeking revenge for the death of their primarch. Guided by the visions of the prophet Talos, a warband from this sinister Legion struggles to survive in a constant war against the forces of the Imperium. But when they come into conflict with fellow renegades and are hunted by the eldar of Craftworld Ulthwé, the Night Lords find themselves returning to the scene of their greatest defeat and drawn into a battle they cannot possibly win.

ABOUT THIS EDITION
Each of the novels in this set is presented in hardback with a foiled front cover and a page of full colour art inside. Soul Hunter is signed by the author, and a cardboard slipcase keeps the trilogy together. 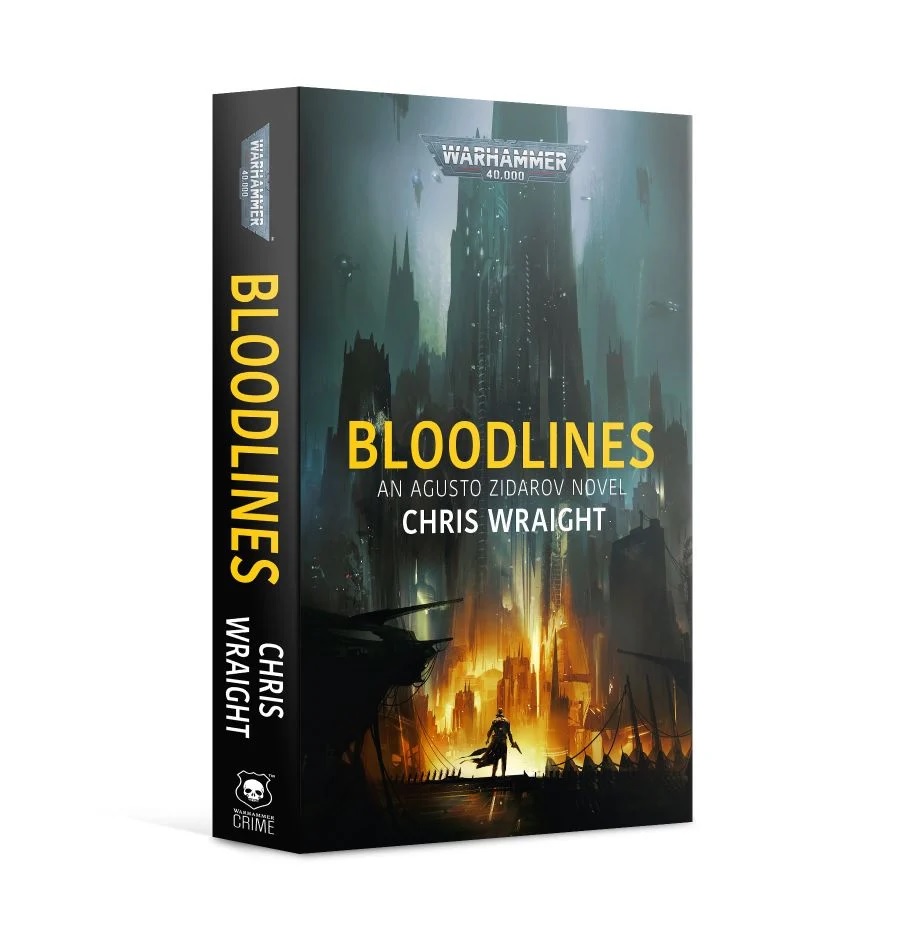 An investigation into a missing member of a wealthy family leads Probator Agusto Zidarov into a web of lies and danger amidst the criminal cartels of Varangantua. As the net closes in, Zidarov falls further into darkness from which he may never return…

READ IT BECAUSE
Take a step into the murky underworld of the 41st Millennium through the eyes of a lawman in a gargantuan city whose investigation leads him into darkness and danger.

THE STORY
In the immense city of Varangantua, life is cheap but mistakes are expensive. When Probator Agusto Zidarov of the city’s enforcers is charged with locating the missing scion of a wealthy family, he knows full well that the chances of finding him alive are slight. The people demanding answers, though, are powerful and ruthless, and he is soon immersed in a world of criminal cartels and corporate warfare where even an enforcer’s survival is far from guaranteed. As he follows the evidence deeper into the city’s dark underbelly, he discovers secrets that have been kept hidden by powerful hands. As the net closes in on both him and his quarry, he is forced to confront just what measures some people are willing to take in order to stay alive… 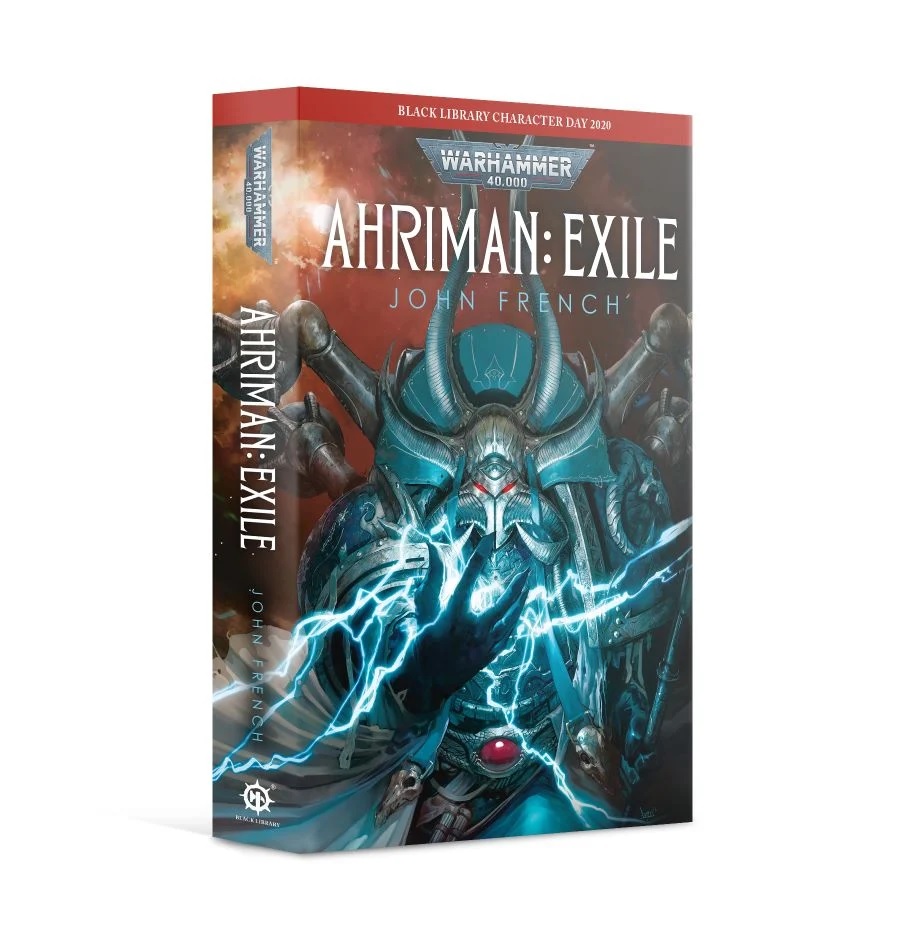 Book one in the Ahriman series

Cast out of his Legion, the sorcerer Ahriman, who condemned the Thousand Sons to an eternity of damnation, plots his return to power and the destruction of his foes.

READ IT BECAUSE
Experience the beginning of an epic, time-twisting saga of revenge, betrayal and attempted atonement. John French takes the Ahriman you know and love from the Horus Heresy in new and interesting directions, making him both deeply sympathetic and thoroughly evil.

THE STORY
All is dust… Spurned by his former brothers and his father Magnus the Red, Ahriman is a wanderer, a sorcerer of Tzeentch whose actions condemned an entire Legion to an eternity of damnation. Once a vaunted servant of the Thousand Sons, he is now an outcast, a renegade who resides in the Eye of Terror. Ever scheming, he plots his return to power and the destruction of his enemies, an architect of fate and master of the warp. 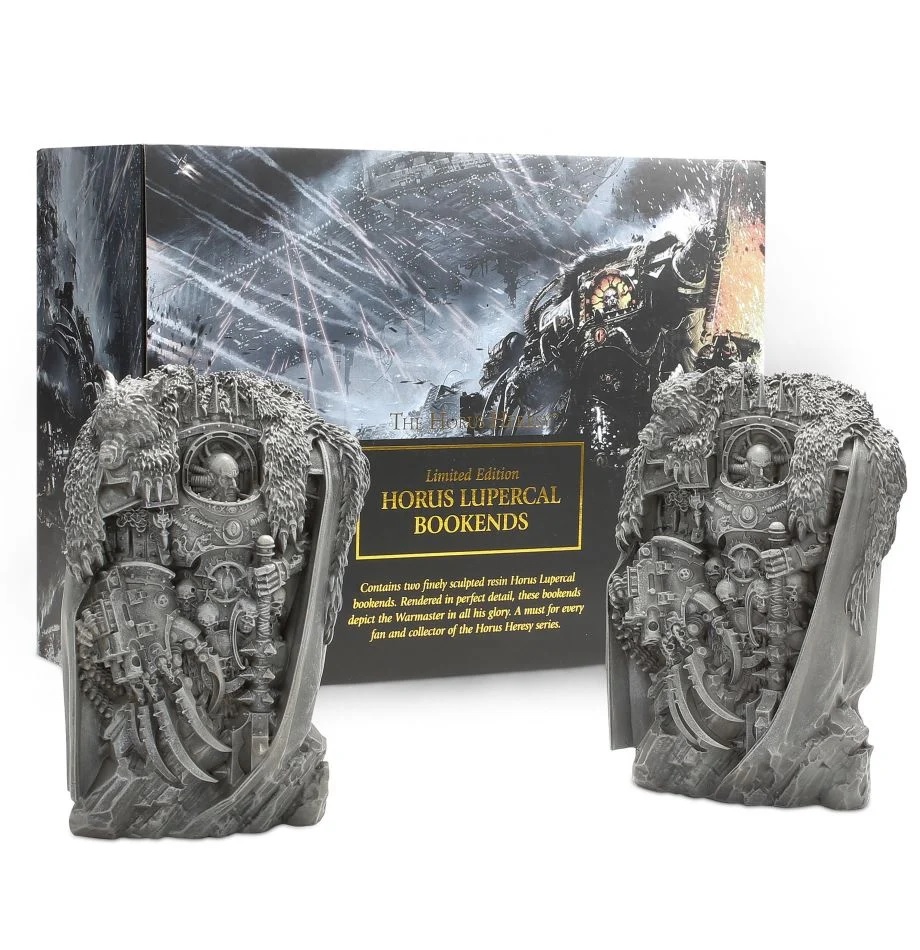 Have the Warmaster himself defend your collection of novels with a pair of resin bookends in the shape of Horus. Each of them has a weathered stone finish and features the image of the Warmaster, complete with iconic details like his fur cloak and mighty talon. 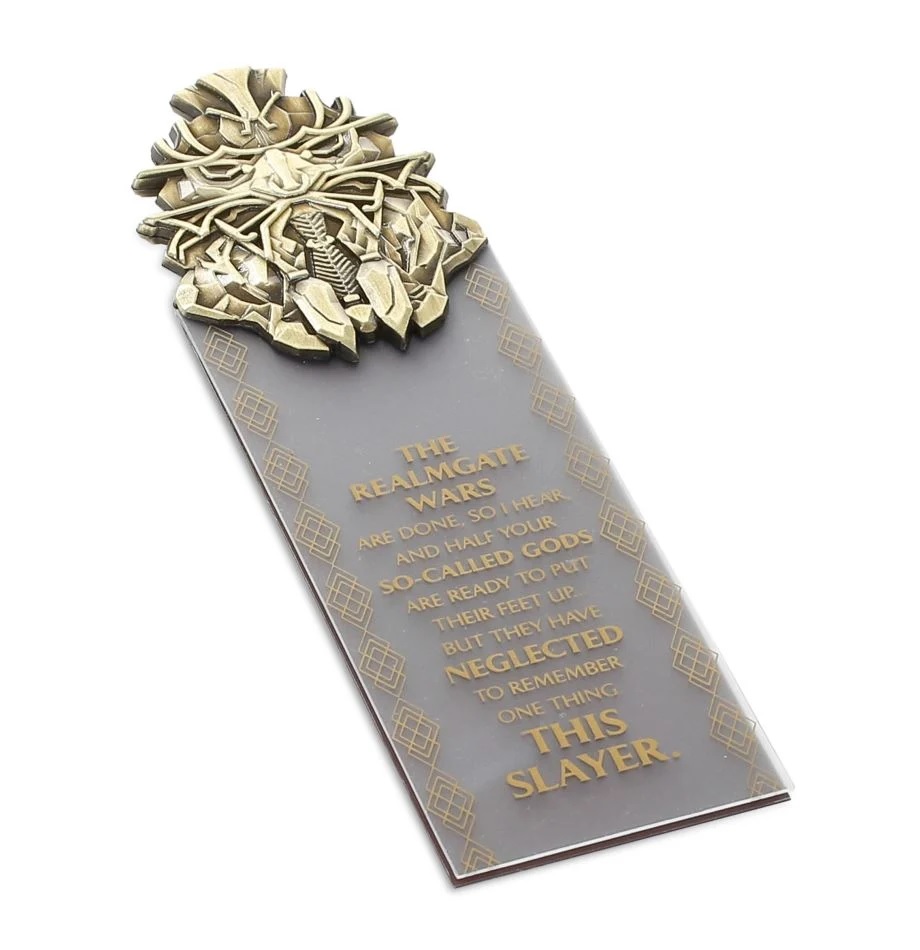 Keep your place in Gotrek’s adventures, or whatever else you’re reading, with this deluxe bookmark. It’s made from frosted PVC bearing a quote from the audio drama Realmslayer, and is topped with a metal cap shaped in a duardin design. 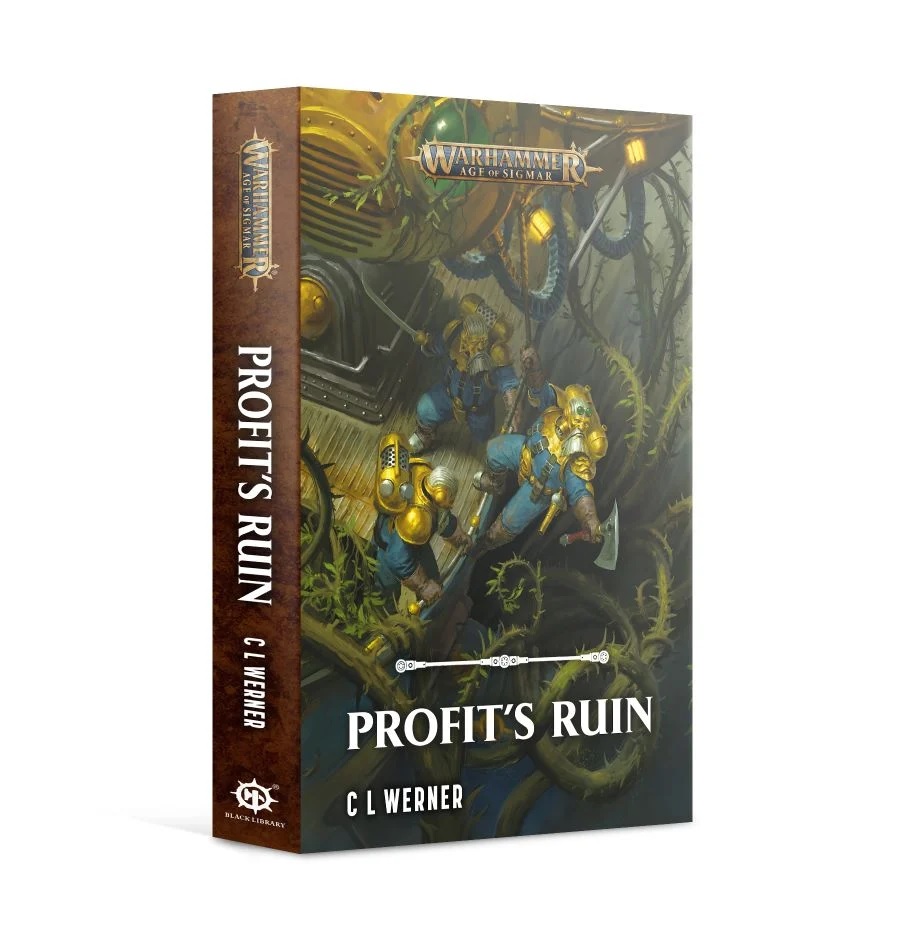 Book 2 of the Kharadron Overlords

Only the greedy and the desperate seek out the fabled sky-island of Profit’s Ruin, for no Kharadron vessel has ever escaped its grip… Will Brokrin Ullissonn and the Iron Dragon be the first?

READ IT BECAUSE
Explore the skies of the Mortal Realms and experience never-before-seen wonders and terrors.

THE STORY
Threatened with losing their ship to pay their investors, Brokrin Ullissonn and the crew of the Iron Dragon embark on a perilous voyage: to seek out the fabled sky-island of Profit’s Ruin. Glory and riches await them if they can discover the secrets of the infamous legend, but it is a voyage undertaken by only the brave and the desperate. Beset by enemies old and new, Brokrin’s journey is fraught with danger and overshadowed by a terrible truth: no Kharadron vessel has ever escaped from the grip of this floating sea of weeds and vines. Will the Iron Dragon be the first?

What are you going to read from the Black Library?!